Avian hepatitis E virus (aHEV), clinically important in poultry industry, can cause death and reduce egg production of chickens, resulting in significant economic losses in the poultry industry. However, little is known about this aHEV infection in Burkina Faso. This study presents the results of distribution and characterization of aHEV in domestic and wild birds without clinical disease. In total 173 birds liver samples were collected from four Burkina Faso provinces, between February 2015 and June 2016. Reverse transcription polymerase chain reaction (RT-PCR) with aHEV specific degenerate primers was used to screen the presence of aHEV. RNA of aHEV was detected in 29 (16.8%) liver samples. Of these, the prevalence was diverse in different species of birds; the most frequent level was 35.3% in Numida meleagris, respectively followed by 23.5% in Gallus gallus domesticus, 13.3% in Streptopelia turtur, 13.3% in Columba livia, 6.7% in Anas platyrhynchos and 3.3% in Pternistis natalensis. The present study firstly revealed the prevalence of HEV infection in six species of birds in Burkina. It is therefore important to conduct further research on the impact on poultry mortality and egg production in our country.

Hepatitis E virus (HEV), known to have zoonotic potential (Pavio et al., 2010), is transmitted enterically, mainly through the consumption of contaminated food or water (Yugo and Meng, 2013). HEV is the causative agent of a self-limiting acute hepatitis, ranges from an asymptomatic to a severe course, as described in immune-compromised patients and pregnant women (Purdy and Sue, 2017; Zuin et al., 2017). The severity in pregnant women is reflected in a mortality rate reaching up to 10 to 30% compared with 0.5 to 4.0% in young adults (Ward et al., 2011). HEV is divided into two genera: Orthohepevirus with four species (A–D) and Piscihepevirus with one species (Spahr et al., 2018). Orthohepevirus A has at least 8 recognized genotypes of mammalian HEV. Orthohepevirus B consists of avian viruses and is divided into four proposed subtypes (I–IV) associated with geographical distribution (Sridhar et al., 2017).

HEV infections are completely asymptomatic in many animal species, but it seems to have some pathogenic importance for chickens (Yugo et al., 2016). Besides  the  enlargement  of  spleen  and  liver,  both  ovarian  regression  and presence  of serosanguinous abdominal fluid or clotted blood in the abdomen are commonly associated with the HS syndrome (Ritchie and Riddell, 1991; Payne et al., 1999; Haqshenas et al., 2001; Thiry et al., 2017). The disease mainly causes a decrease in egg production and an increase in mortality in birds (Sun et al., 2004; Peralta et al., 2009). However, aHEV can be detected in birds without symptoms as well (Yugo et al., 2016; Zhang et al., 2016; Zhang et al., 2017). The  virus  appears  to  spread  easily  within  and  between  flocks  via  the  fecal-oral  route transmission (Yugo et al., 2016). Other routes of transmission, including aerosol, vertical, vector-borne, or mechanical carrier, have not been demonstrated in natural or experimental avian models (Meng, 2011).

Human infection with aHEV has not been observed up to now as it was for swine HEV (Meng, 2010). However, aHEV exposure of human population have largely increase in relationship to the consumption of contaminated poultry eggs and  meat,  the  use  of  poultry viscera as a culinary delicacy, and the handling of poultry (Hsu and Tsai, 2014). In addition to the already described capacity of the virus to recognize human hepatocyte (Hsu and Tsai, 2014), the existence of a yet unknown aHEV variant able to enter and infect human liver may have a critical public health implication in the future.

In West Africa, the status of avian HEV infection in chickens is largely unknown. Considering that aHEV infection is most prevalent and dangerous among birds, it is imperative to access the contribution of aHEV to poultry and wildlife in Burkina Faso. The aim of the present study were to determine the possible circulation of avian HEV both in domestic and wild birds without clinical symptoms in Burkina Faso. 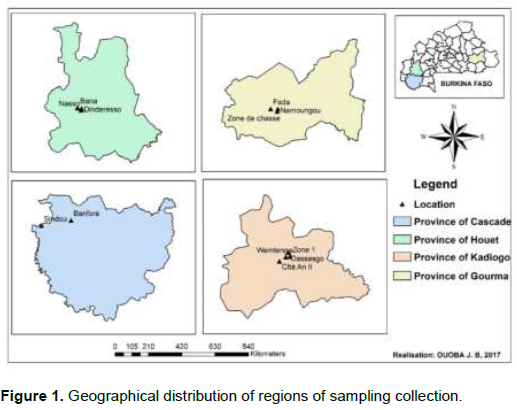 0.5 g of liver samples from each animal were collected and stored at -20°C in the RNAlater Buffer, until further use as source of HEV genomic RNA. Wild animals were samples in the provinces of Houet and Gourma where there are hunting areas. Kadiogo is in the center and does not have a hunting area, so no wild birds were taken in this area.

RNA extractions on the liver samples were performed using the SV total RNA isolation system kit (Promega, France). Extracts were subsequently used for detection of the partial capsid gene of aHEV using primers described previously (Bilic et al., 2009) in a reverse transcriptase polymerase chain reaction (RT-PCR). Briefly, external primers set Forw1_C-BLSV (5’-GGTATGGTTGATTTTGCCATAAAG-3’) and Rev1_C-BLSV (5’-GCTGCNCGNARCAGTGTCGA-3’) were used. The reverse transcriptase reaction and polymerase chain reaction were performed with the OneStep RT-PCR kit (Promega, France), according to manufacturer’s instructions under the following conditions: 50°C for 30 min; 95°C for 5 min; 45 cycles of 94°C for 30 s, 60°C for 30 s, and 72°C for 1 min, followed by a final elongation step of 72°C for 10 min. The negative control was water treated in the same way as the liver samples. Polymerase chain reaction (PCR) products with the expected size (280 bp) were revealed on a 1% agarose gel containing SybrGreen (Figure 2). 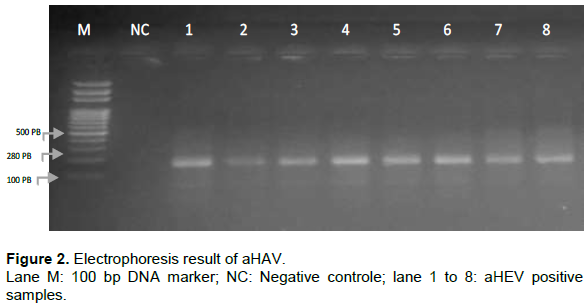 We performed the statistical analysis using R software version 2.13.0, through the package ‘Rcmdr’ version 2.5-1 (Fox et al., 2018). The differences in avian HEV RNA positivity between different  variables   (Locality  and  Species)  were  evaluated  using logistic regression binomial. The best model was judged by Fisher's scoring algorithm. All tests were two-sided, and values of p < 0.05 were considered statistically significant. Odds ratios (ORs) and their 95% confidence intervals (95% CIs) were estimated to explore the strength of the association between aHEV positivity and the conditions investigated. 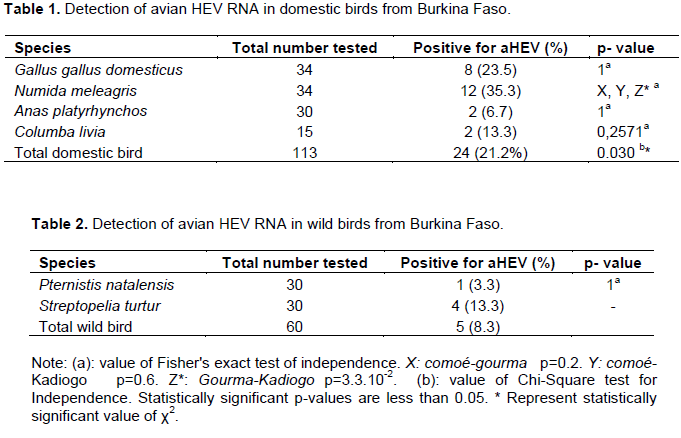 This prevalence of aHEV RNA was diverse in different birds species; the most frequent level was 35.3% in N. meleagris, 23.5%, in G. gallus domesticus, 13.3%, in S. turtur, 13.3%, in C. livia, 6.7% in A. platyrhynchos and 3.3% in P. natalensis. The differences could be related to differences in ecological and geographical factors (Cong et al., 2014). Thus, the high rate of aHEV RNA showed in the domestic species (G. gallus domesticus, N. meleagris, A. platyrhynchos and C. livia), could be due the poultry were highly congested in livestock areas, feces likely serve as the main source for virus spread within the flock (Haqshenas et al., 2001; Saif et al., 2008; Ahmad et al., 2010; Meng, 2011; Yugo et al., 2016). Domestic birds could be most often subject to a re-infection, because proper sanitation conditions in the henhouse are lacking and bird drinking water can contain feces (Crespo et al., 2015). This results suggests the possibility  of   aHEV   transmission   from   asymptomatic cases or repeated introduction through an unknown common source (Hsu and Tsai, 2014). Some studies have also shown that the high density of poultry increases the risk of disease transmission (Ricard and Marche, 1988). The low prevalence of aHEV RNA observed in wild birds (P. natalensis and S. turtur) also reflects that the congesting increases the likelihood of positive. Indeed, these birds live in liberty and are less congested compared to domestic birds. As for, A. platyrhynchos living in semi-liberty, the rate of positive sample (6.7%) was higher than in wild birds (Crespo et al., 2015). Burkina Faso is a developing country with low health and educational standards. Utilization of untreated bird feces for agriculture could increase the risk of virus dissemination, which in turn can infect wild birds. The high frequency of aHEV occurrence in bird livers in our country must be monitored to avoid an eventual outbreak. We have not investigated the source of aHEV infection in this study, but the role of wildlife in spreading the disease cannot be ignored (Crespo et al., 2015). The present study demonstrates the circulation of avian HEV in the domestic and wild birds without clinical symptoms, in Burkina Faso. This asymptomatic circulation of the virus in birds is of great interest and should be better monitored to avoid large epidemics. Thus we have to undertake studies on public health issues related to aHEV and the genetic diversity of aHEV inside the country.

J.B.O. received funding from the 3rd-cycle university scholarship program of the Embassy of France in Burkina Faso (http://www.burkina.campusfrance.org).