Hip dysplasia in cats appears to have a similar prevalence as that seen in dogs especially with large breeds of cats like the Maine coon. However, cats do not commonly show signs of lameness like dogs do. This study was to determine the prevalence of hip dysplasia in domestic shorthair breed of cats in three municipal districts in Accra, Ghana. Twenty (12 males and 8 females) adult (2.3 ± 0.8 years) shorthair breed of cats of both gender weighing 1.7 ± 0.4 kg were included in this study. They were sedated with xylazine and atropine injection prior to radiography. Extended and frog-leg ventro-dorsal radiographs were taken using a manual processing x-ray machine. Norberg angles (NA), joint space scores and subjective morphological alterations for each hip were assessed. Comparisons were made for the NA scores within gender, between gender, between the right and left hips using Independent t-test. The relationship between the joint space scores and weight, age or gender of the cats was assessed. The morphological changes were also assessed. Mean manual Norberg angle measurements for 19 cats were 93.67 ± 1.9° and mean digital Norberg angle measurements for 19 cats was 102.35 ± 1.1°. One cat with complete cranio-dorsal luxation, due to history of preceding accident had manual Norberg angle of 38° and digital Norberg angle of 45°. Two cats displayed mild subluxation of the hip joint. There was no considerable difference in the NA or joint space measurements. This study found a ten percent prevalence of hip dysplasia in domestic shorthair breed of cats in the three Municipal Districts in Accra, Ghana. Both manual and digital methods for measuring the NA provided results which were within similar ranges.

Hip dysplasia is an abnormal development of the hip joints affecting humans, large and small animals. It can occur unilaterally but it is mostly bilateral. It presents with varying degrees of laxity of the joint  ligaments,  abnormal changes of the femoral head and acetabulum leading to secondary osteoarthritis (Allan and Davies, 2018). Hip dysplasia is an inherited disease of dogs (Alexander, 1992; Smith et al., 1990). Gierson (2012) proposed a lack of well-defined genetic association of hip dysplasia in cats however, studies by Low et al. (2019) showed a correlation between older and heavier cats having the tendency of severe feline hip dysplasia affecting both limbs and younger and lighter cats having mild conditions which often affect one hip. In cats, joint laxity may not play the same role in the pathogenesis of hip dysplasia as in dogs due to the shallow acetabulum usually found in cats. Subluxation of the femoral head is not consistently seen and there is minimal remodeling of the femoral head (Keller et al., 1999). The condition affects all breeds of dogs and it appears to be higher in large breeds compared with small breeds of dogs. The occurrence among breeds can be from as high as 70.5% in Bulldogs and 48.2% in St. Bernards to as low as 1.9% in Borzois (Corley and Keller, 1993). Even though hip dysplasia occurs in toy breeds of dogs as well as cats, their affected hips rarely produce the bony changes commonly seen in heavier dogs (Brinker et al., 2006). Hip dysplasia can occur in any breed of cat. The occurrence in domestic shorthair cats was 10.4%; derived from a mixed breed population of 899 cats (Keller et al., 1999). However, it is as high as 24.9% percent in purebred cats like the Maine Coon (Loder and Todhunter, 2017).

Hip dysplasia in companion animals can be screened qualitatively by identifying abnormal radiographic changes on the acetabulum, the head or neck of the femur (Flückiger, 2007). The commonly used screening methods include the Orthopaedic Foundation for Animals (OFA), British Veterinary Association/Kennel Club (BVA/KC) and Federation Cynologique Internationale (FCI). These methods describe the tightness or laxity of the hip joint and deviations from the ideal ball and socket conformations; these may include mild to severe osteoarthritic changes (Dennis, 2012). Computed Tomography (CT), Magnetic Resonance Imaging (MRI) and ultrasonography are other less commonly used methods of diagnosis (Phillip and Harry, 2012; Guillot et al., 2012). Common objective measurements used in the assessment of coxofemoral joints for presence or absence of hip dysplasia include the Norberg angle (NA) and the Distraction index (DI) (Allan, 2000). Norberg angle is used to measure hip joint laxity in research studies and used as a selection criterion in the canine registry databases of the prevalence of hip dysplasia by breed (Tomlinson and Johnson, 2000). The NA is measured when a line drawn from the cranial acetabular edge to the center of the respective femoral head intersects a line drawn between the two femoral heads. The NA varies with the depth of the acetabulum and the amount of coxofemoral laxity observed on the radiograph. The NA measurement can be carried out manually or digitally. The DI is a unit less index of passive coxofemoral joint laxity that is calculated from compression and distraction radiographs of the coxofemoral  joints. Low DI  values correspond with low radiographic signs of degenerative joint changes.

Some studies have shown that the DI values are a more reliable predictor of degenerative joint disease (DJD) in hip dysplasia than the Ortolani sign, Norberg angle, or OFA measurement of hip conformation (Smith et al., 1993, 1995). Hip dysplasia and subsequent osteoarthritis are clinical problems in cats, however, the prevalence in domestic shorthair breed of cats in Accra, Ghana is not yet known. The purpose of this study was to determine the prevalence of hip dysplasia in the domestic shorthair breed of cats in Accra, Adenta and Ledzokuku municipal districts of Accra, Ghana and to identify which measuring method (manual or digital) provided a more reliable result.

This study was approved by the institute of Animal Care, Use and Research Ethics Committee of the University of Ibadan (UI-ACUREC/19/0050) and informed consent forms were administered on all the owners. Twenty, 12 males and 8 females, apparently healthy client-owned domestic shorthair adult cats with mean age of 2.3 ± 0.8 years and mean weight of 1.7 ± 0.4 kg were included in this study. They were patients presented at The Vet Place, Achimota in Accra with no previous history of musculoskeletal problems for the past year. They had no history of castration or spaying.

The cats were sedated with intramuscular injections of 0.5 mg/kg of xylazine (Xylazine 2% Inj®, Dutch Farm International BV, Holland) and 0.04 mg/kg of atropine (Atrowell®, Wellona Pharma, India). An extended and frog-leg ventrodorsal view of the hip joint were taken for each cat using a manual processing X-ray machine (TUR® manual processing X-ray machine, Dresden). The extended and frog-leg ventrodorsal radiographs were qualitatively graded as dysplastic or normal based on the Orthopaedic Foundation for Animals scoring system. Qualitatively determined subluxations without any signs of osteoarthritis were graded as mild hip dysplasia (Flückiger, 2007).

The radiographic images were also analyzed using the Norberg angle measurements for the right and left hips. A line was drawn from the cranial acetabular rim of the right hip to the center of the femoral head of the right limb. This line then transects a line drawn between the two femoral heads. This was repeated for the left hip. The angle measured is the Norberg angle (Peiffer et al., 1974). As shown in Figure 1, digital Norberg angle measurements were made with Digimizer®. The joint space for each hip was measured using a digital Vernier caliper from the cranial acetabular edge to the head of the femur facing it. Subluxation and complete luxation of the hip joint is presented in Figure 2. 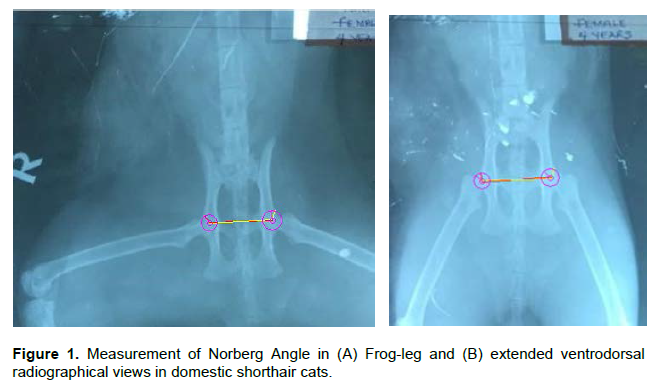 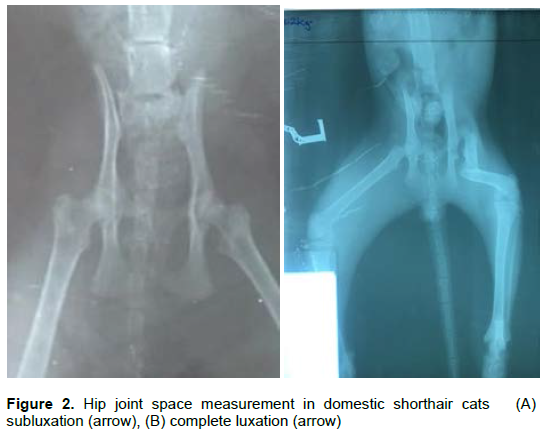 Data was presented as mean and standard deviation. The Pearson’s correlation test was done to determine any relationship between the coxofemoral joint space scores with mean age, weight and gender. The Independent t-test was used to define statistically significant differences in the measurements between Norberg angle scores between gender, within gender, between right hip joints and between left hip joints as well as between manual and digital Norberg angle scores. A P-value of <0.05 was significant.

The results of this study revealed a 10%  (2/20) prevalence of hip dysplasia in domestic shorthair breeds of cats of the Accra, Adentan and Ledzokuku municipal areas of Accra, this excludes the cat with complete luxated hip due to an automobile accident. The mean and standard deviation of the joint scores between male and female indigenous domestic cats are shown in Table 1. There was no considerable difference between the measurements of the hip joint space scores.

The acetabulum, head and neck of the femur were assessed for any deviation from normal congruency and appearance using the orthopaedic Foundation for Animals scoring system. One cat had a luxated right hip joint. Two cats had a subluxated hip joint each. The mean and standard deviation of the Norberg angle for the right, left and combined hip joints were shown in Table 2. There was no significant difference (P < 0.05) in the manual and digital methods of measuring the hip joint in both the extended and frog-leg radiographs.

The results of this study revealed two cases of subluxation of the hip joint without any osteoarthritic changes to the bones. This may be attributed to their low body weight which does not cause remodeling of the coxofemoral joint, this is in agreement to the findings of Brinker et al. (2006) that hip dysplasia in toy breeds of dogs and cats rarely produce bony changes in the affected hips. There was no significant difference when comparing the measurements for each pair of hips. The variables (Norberg angle scores) derived manually and digitally for all the cats were also similar. This indicates that both left and right hip are evenly predisposed to hip dysplasia and agrees with findings by Low et al. (2019).

Allan and Davies (2018), explained that radio-graphically, joint space widening is not easily identified in small animals; this may be because dogs and cats cannot be X-rayed in a standing position or due to inconsistencies between the direction of the X-ray beam and the joint space. This is similar to results obtained in this study. The joint space scores were compared with regards to gender, age, and weight. This study showed the joint space values were all less than 1 mm apart from the luxated limb. This may be the beginning phase of hip dysplasia in contrast to chronic hip conditions where the joint space capsule can be as thick as 5-7 mm in a bid to stop femoral luxation (Morgan et al., 2000).

In conclusion, the results of our study showed there was no advantage of the digital method of measurement over the manual method. Both can be used to derive reliable values for the detection of hip dysplasia in cats. The actual incidence of hip dysplasia in indigenous domestic cats in Accra may well be higher than this study shows; hence, there is need for further research with larger population sample in this subject area.

The authors sincerely appreciate the support of Dr. Selom Tettey and the entire staff of The Vet Place, Achimota, Accra Ghana.