The mutual dependence of solar flare and geomagnetic H and Z components during the period of least (2009) and maximum (2002) solar activity using archived and observed data were examined. Solar flares were identified by sudden ionosphric monitor (SIDMON) constructed by staff of Centre for Basic Space Sciences, University of Nigeria, Nsukka, Nigeria. However, SIDMON results were still confirmed by satellite data since it was still at the rudimentary stage. Results show that during solar minimum and solar maximum solar flare affects the geomagnetic H component but appears to have little or no effect on the Z component across all the latitudes. The effect is pronounced at the equatorial latitude more than at the high latitudes. Results from SIDMON is though not very reliable but encouraging, thus the instrument needs a lot of improvement.

Solar flares (SFs) are known to have adverse effects on ground-based and space-based communication, navigation and power distribution systems. They distort long distance short-wave radio communications, degrade accuracy of Global Positioning System (GPS) measurements and damage electronic components as well as reduce life span of satellites. They cause power failures by tripping off circuit breakers and damaging transformers. Thus, the economic and social losses from SFs are enormous.

SFs affect the geomagnetic field by increasing ionization mainly in the E region, partially in the D region and occasionally in the F regions (Sengupta, 1970; Das et al., 2010) but the level at which x-ray ionization becomes dominant depends on the level of solar activity and on solar angle and is dominant above 85 km for all levels of solar activity (Sengupta, 1980). SFs are produced mainly in two preferred longitude ranges; the so-called active regions (Zhang et al., 2011). They produce radiations across the entire electromagnetic spectrum, affect all the layers of the solar atmosphere and are responsible for ionospheric events during periods of high and low solar activity.

Disturbance in the vertical component of the atmospheric electric field associated with solar flare and coronal mass ejections is mostly observed close to the onset of the causative solar flare (Kasatkina et al., 2009). Several researchers (Brown, 1981; Butcher and Brown, 1981; Butcher, 1982; Rastogi, 1997; Rastogi et al., 1999; Okeke and Hamano, 2000; Abdu et al., 2017) observed a reversal of the electric field around local noon hour, particularly over equatorial electrojet (EEJ) stations, with the horizontal and vertical components of the geomagnetic field showing maximum value at the noontime. This is a very rare phenomenon. The counter EEJ (the pre-noon and afternoon maximum in dH events observed in the geomagnetic H field, the absence of equatorial sporadic E region (Esq) reflections and the reversal of the ionospheric drift direction during daytime hours at an equatorial station were concurrent phenomena (Rastogi et al., 1971). Abdu et al. (2017) observed that the expected eastward growth in electric current due to flare induced ionization enhancement is strongly shielded by an electric current of westward polarity.

Okeke and Okpala (2006) found that strong correlation exists between solar flare amplitude of the Z component (dZsfe) and the monthly mean of the Sq variation. In addition, strong responses of the Z and Y fields to solar activity were observed.

Purpose of the study

SFs have very serious effects on local space weather since they affect the earth’s magnetic field and the atmosphere of the earth. For instance, during solar flares proton storms are released and can change the magnetic field of the earth. The purpose of this work is to: (i) identify solar flares using Sudden Ionospheric Disturbance Monitor (SIDMON from a Nigeria-based observatory, Centre for Basic Space Science, (CBSS), University of Nigeria, Nsukka, (UNN), (ii) investigate the effects of solar flare on geomagnetic H and Z components during solar maxinum and solar minimum by calculating the ratios of solar flare enhancement amplitudes (?Hsfe and ?Zsfe) to pre-flare amplitudes (?Ho and ?Zo) respectively. The results will throw more light on a better understanding of the effects of solar flare on geomagnetic activity. SIDMON was locally constructed by staff of CBSS, UNN. It was being tested for detecting small ionospheric disturbances by way of increased ionization like C and M classes of flares and disturbances from transformers, fluorescent tubes, and computers among others. It must be noted that SIDMON can only identify C and M classes of solar flares; the X class of flares causes a plateau effect on a SIDMON and cannot be identified by it. It was the first time SIDMON was used to identify solar flares from a Nigeria-based observatory.

Through observational technique, SFs were identified using SIDMON of CBSS, UNN. Solar flare data were downloaded from NGDC of the NOAA, Boulder, USA. This enabled us to compare results from CBSS, Nsukka, Nigeria with that of NOAA, Boulder, USA.

The data set of geomagnetic elements H and Z one minute averages were obtained from four observatories namely: Addis Ababa, Bangui, Belsk and Hel, courtesy of INTERMAGNET (http://ottawa.intermagnet.org/apps/dl_data_prel_e.php). These stations lie within latitude 4°N–55°N and longitude 14°E–39°E (Table 1) and cover all the latitudes. They have uninterrupted data for 2002 and 2009, which were periods of solar maximum and solar minimum respectively and the period for this study. The year 2009 was a period of spotlessness (low sunspot count), mostly slow solar wind, and low solar irradiance. No significant solar flare was recorded between 2008 and 2009 by satellites and only very few of these flares were identified by SIDMON.


THEORY AND METHOD OF ANALYSIS

Using the International quiet days, SFs that have effect on geomagnetic field were selected and analyzed for the four different stations.

The deviations on the geomagnetic components H and Z with respect to the 0000 h value on same day according to Rastogi (1997) are denoted as ?H0 and ?Z0 and are defined as: 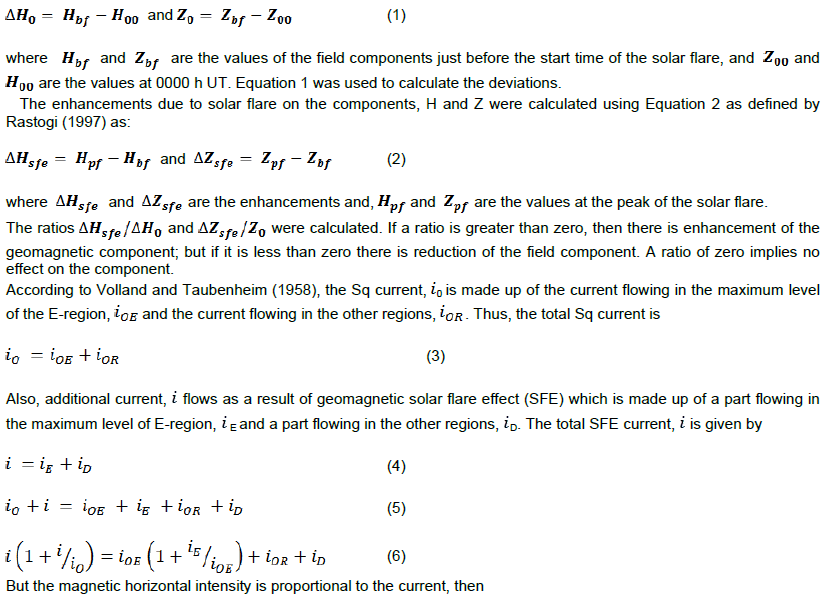 From Table 2 which is summarized in Figure 1(a-d), it is clear that only the equatorial latitude station of BNG exhibited a positive correlation with a positive slope which suggests that geomagnetic H component is enhanced while the rest stations showed negative correlation implying reduction of the H component. The intercepts which are zero in theory deviated from the prediction in three stations. This may be due to the effects of longitudinal variations, approximation of local time and possible effect of external ionization of the SIDMON used in observing some of the flares locally.  However, with very small values of coefficient of determination, r2, the regression line may not be the best parameter to describe the relationship between geomagnetic field component and solar flare. 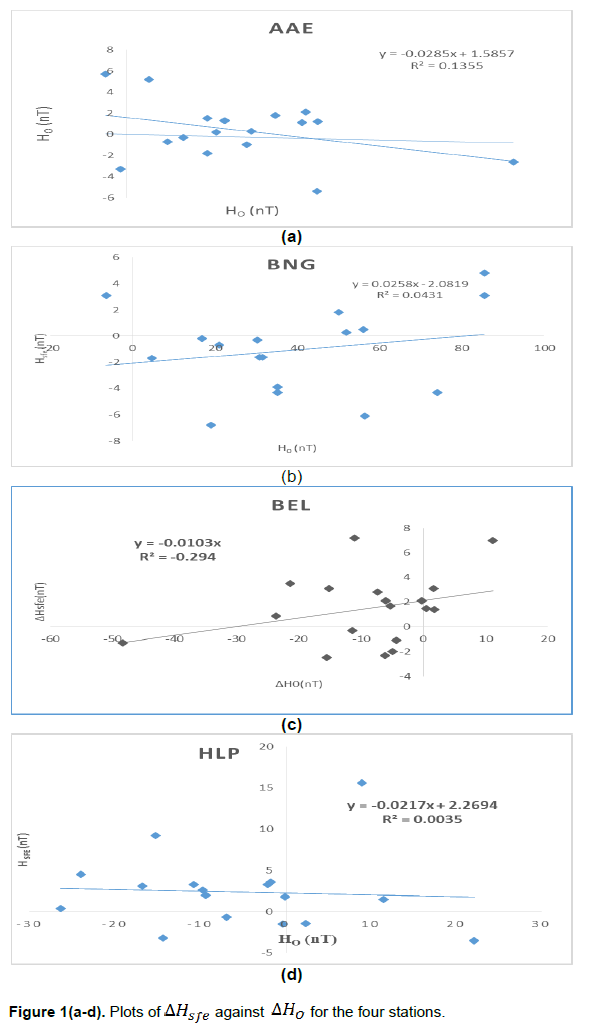 Figures 2 to 5 illustrate the variations of geomagnetic H component during solar flare events. Only some of the SFs are shown. A total of 22 solar flares were selected out of which eight were detected by SIDMON after comparing with satellite data. The selected flares were those that had signatures on geomagnetic H component since the Z component showed erratic behavior with solar flares. At AAE, a dip latitude station, 11 or 61% of the 18 flares analyzed have ratios greater than zero while only 7 or 39% SFEs have ratios less than zero. BNG is an equatorial station and 12 or 71% out of 17 SFs recorded ratios greater than zero and only 5 or 29% of the flares had ratios less than zero. From the results, there was more enhancement than reduction of the H component of the geomagnetic component at AAE  and  this  trend  was followed by BNG, an equatorial latitude station. At the mid-latitude station of BEL, 18 solar flares were analyzed; 50% had ratios greater than zero and 50% recorded ratios less than zero. At the high latitude station of HLP, 17 solar flares were analyzed and only 6 or 35% recorded ratios greater than zero while 11 or 65% had ratios less than zero implying that almost half of the flares reduced the component. Summarily, 54% of all the flares enhanced the geomagnetic field while only 46% reduced the field. This observation has been linked to the existence of zonal and meridonal currents which accounts for the Sq currents. Also, in some cases where 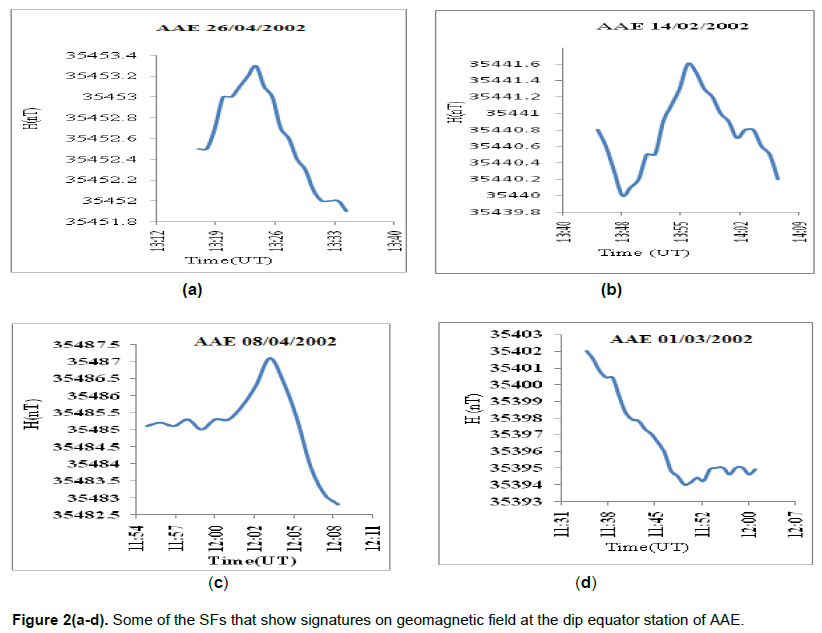 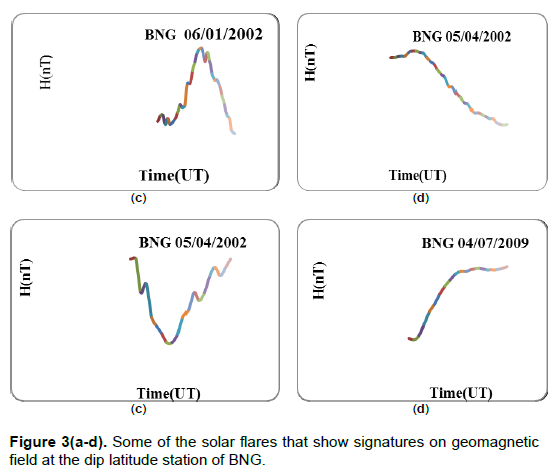 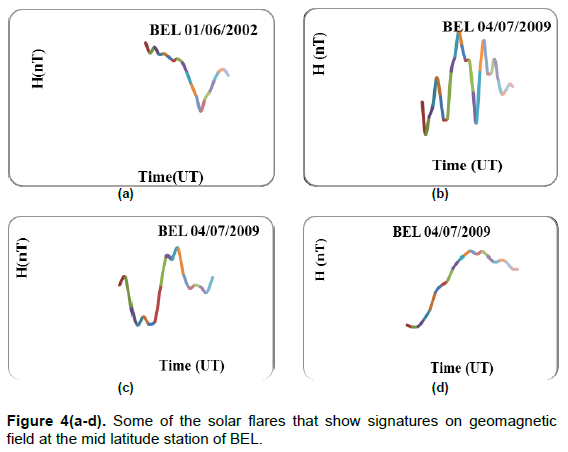 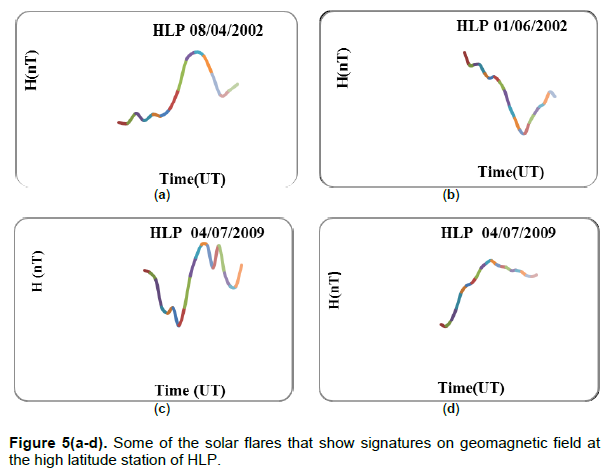 The Z components of the geomagnetic field showed no remarkable changes in the values of Zbf. Though there appeared to be a consistent increase in the values, there were erratic variations in Z during and after most of the flares. It does appear that solar flare events had no signatures on the Z components in all the stations.

From Figure 6a, the SIDMON had recorded high values of ionization at the two points labeled flares. The peak of ionization at 1220UT in Figure 6a is likely the same as the solar flare with peak at 1204UT at BEL in Figure 4d because flare requires some minutes to arrive at the ionosphere for SIDMON to identify it. The flare arrived at the ionosphere about eight (8) minutes after it has been recorded by satellite. Figure 6b shows the plot of SIDMON values between 1225 UT and 1243 UT and it was suspected that flares occurred at the points labeled flare though the GOES satellite had identified a flare that occurred between 1231 UT and 1238 UT. This  flare  had its peak at 1233 UT at AAE (Figure 2f) and 1237 UT at both BEL and HLP (Figures 4e and 5e respectively). Comparing Figures 2f, 4d and 5d with Figure 6b, it was clearly obvious that the flare which started at 1231 UT and ended at 1238UT as recorded by GOES satellite was identified at 1238 UT by SIDMON at CBSS, UNN as increased ionization. There was a lag time of about seven (7) minutes before it arrived at the ionosphere for it to be identified by SIDMON. GOES satellite recorded flare between 1503 UT and 1512 UT with peaks at 1507 UT at AAE (Figure 2d) and HLP (Figure 5c), 1511UT at BNG (Figure 3d) and 1508 UT at BEL (Figure 4f) respectively but SIDMON recorded peak ionization at 1502 UT (Figure 6c). There was no time lag as expected. It is possible that SIDMON was affected by other disturbances like transformers, fluorescent tubes, computers and occasionally, geomagnetic storms. Any of them can mimic increased ionization records of a SIDMON, hence the need to compare SIDMON plots with the plots of satellite values before finally concluding that there was a solar flare or not. This may also be the reason for having points of high values labeled flares in Figure 6a-c; but after comparing with satellite value plots, there were no flares. 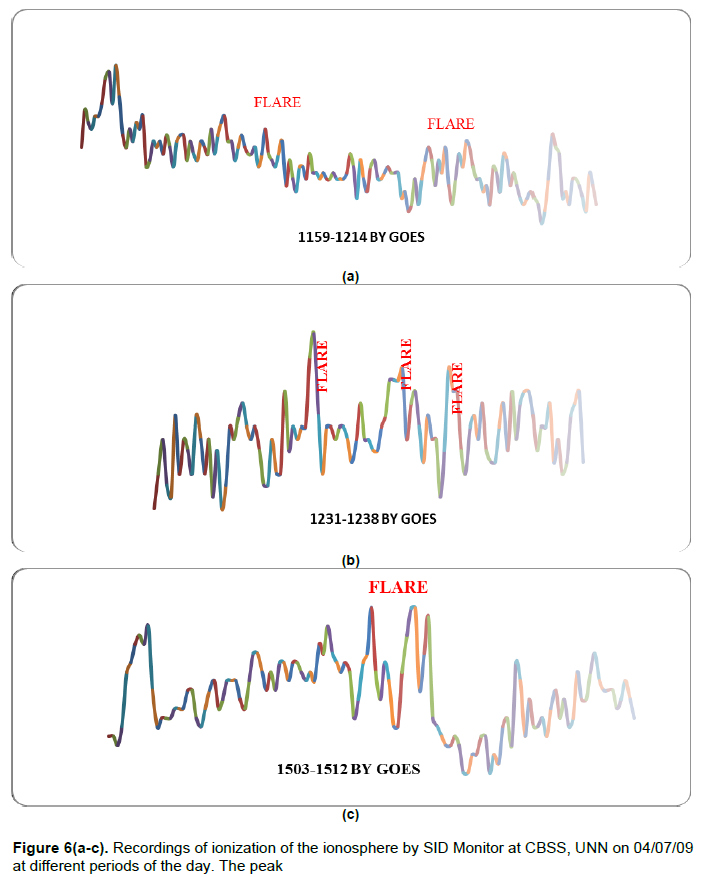 Effects of solar flare on geomagnetic field using satellite and ground data were studied. Based on the analyses of the data available to us, the following conclusions were made: (i) SIDMON can identify SFs but they have to be confirmed with satellite data. (ii) Solar flares enhances the H component of geomagnetic field more than they reduce it at the equatorial and dip latitude stations. (iii) Outside the equatorial and dip latitude stations, solar flares appear to reduce the H component more than they enhance it. (iv) Solar flares do not appear to have any appreciable impact on the Z component; and (v) No two solar flares are exactly the same as flares differ in their signatures on geomagnetic field.