Medicinal plants constitute an effective source of traditional and modern medicine. Angelica glauca Edgew. is a high value medicinal aromatic plant species of the Himalaya. In this article, a brief profile of the herbal medicinal plant Choraka (A. glauca Edgew.) which is used in the traditional system of medicine and in folk medicines in the Kumaun Himalayas was presented. Regular supply of raw material for pharmaceuticals and ethno-medicinal uses has high pressure on demand to fulfill the demand of the raw material. Adulteration and substitution are common in raw material in trade.
Key words: Angelica glauca Edgew, Kumaun Himalaya, adulteration/substitution, trade, population study and conservation.

The Himalaya is rich in biodiversity due to the variety of habitats available in it. Out of the total number of endemics reported for India, about 46% are found in the Indian Himalaya. About 3471 endemic species of flowering plants are reported in the Himalaya. Angelica is a genus of aromatic herb, including about 70 species distributed in the North temperate regions. Two species occurs in India: Angelica archangelica Linn. and Angelica glauca Edgew (Choraka). Angelica (Riv.) Linn (umbellifer.) Ind.Kew. A. glauca, Edgew in Trans. Linn.soc.xx(1846)53-Reg Himal. Latin name Angelica means virtues in medicine and glauca means blue, grey green. A. glauca Edgew. (Choraka, Gandhrayan) belonging to the family Apiaceae is endemic to the Himalaya, distributed along 2600 to 3700 m a.s.l in Uttrarakhand (Kumaon and Garhwal regions) and is an endangered medicinal herb. Depending upon the distribution and local or commercial use in the Uttarakhand, A. glauca is with spare population in few areas and in high demand of restricted distribution heavy pressure (RDPH) (Rawat, 2005). It is found between 2600 to 3700 m asl in western Himalayas. In Uttarakhand the distribution of this plant was mentioned in the valley of flower, Kedarnath, Khatting, Gidara, Kiarki, Changsil, Laspa, Milam (Rawat, 2005). Choraka is a controversial drug with aromatic roots and possess diaphoretic and diuretic properties and are used as spice and condiments by indigenous communities. The roots are considered to be a good cordial and stimulant, used in flatulence dyspepsia and are also useful in constipation. Locally, root powder with milk is given in bronchitis as well as in constipation. Whole herb is reported to be useful to cure stomach troubles, bilious complaints, menorrhagia, infantile atrophy and as a stimulant (Chopra et al., 1956; Anonymous, 1948, Shah.et.al. 1970; Anonymous, 1982, Anonymous, 1985; Bisht et al., 2008; Sarin, 2008). Market demand of these species for pharmaceuticals and ethno–medicine utility, are met through harvesting from wild populations. Due to unsustainable harvesting, habit loss and grazing pressure these species have been assigned as endangered for the Himalayan region (Arya et al., 2013; Bhatt et al., 2014a, b; Ved et al., 2003).
Study area
Intensive survey was carried out for the study of A. glauca Edgew. From Munsyari to Milam glacier located between 2300 to 4100 m asl Pithoragarh district of Uttarakhand Himalaya during flowering season (July to September).  Difference in altitudinal range and climatic condition provide a diverse flora and fauna. Survey of Tanakpur and Pithoragarh was carried out to collect the market information and samples from different traders and dealers for identification of the genuineness of the raw material.

During the market survey, local traders and dealers were identified and interviewed. The raw drug samples of Choru were collected to identify the substitute and adulterant. During the flowering season of A. glauca, various habitat were identified on the basis of altitude, topography and climatic conditions etc. The plant species was sampled by laying quadrates of 1 m × 1 m size randomly in nine different sites. Milam (moraine), Milam (fellow fields), Martoli, Laspa, Phurkia (Pasture), Phurkia (Scrub), Dwali, Simdim, Tejam. Individuals of all the species were counted in each quadrat.
Analytical feature such as density, frequency, relative density were calculated following Mishra (1968). In each site, 30 quadrants were laid randomly. In each quadrat the numbers of individual species were counted as area of occurrence and for the demographic observation of threat category assessment. To determine status of the mean values of each quantitative parameter, three stands of transect were considered for further interpretation. The threat category of a species was identified using six attributes (that is, habitat, preference, distribution range, population size, extraction trend, native and endemic species) and following Samant et al. (1998) and Ved et al. (2003).

Market analysis
During the market survey different traders were identified and interviewed. On the basis of information gathered by interviewing the traders it is found that A. glauca is were sold under the main trade names; Gandrayan, Choraka, Choru and is collected from Pithoragarh district in Kumaon region from wild source and cultivators. As leading to a gradual loss in regeneration potential and diversity of economically valuable species, A. glauca has been categorized as Globally (IUCN) and in Uttarakhand as Endangered species. Because of the species with sparse population in areas and in high demand (RDHP), there is a gap in supply and demand which leads to substitute and adulterant of the species which may be an addition of low grade or spoiled drug with genuine one. The adulterant is usually a material which is both cheap and available in fairly large amount. Choraka roots are sold at Rs 900 per kg in the market (Table 1, Figures 1 and 2). 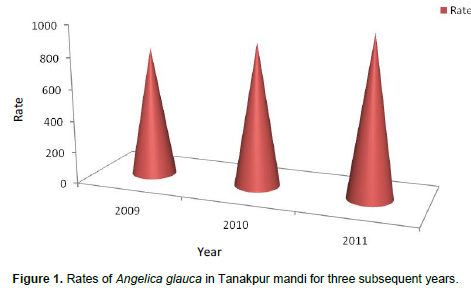 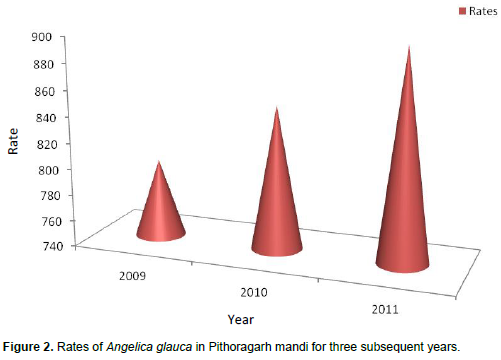 Choraka, its substitute and adulterant
In India, two different species viz. A. glauca and A. archangelica Linn. go under the same vernacular name Choraka. Root and rootstock of both pieces are indiscriminately sold in the market as A. archangelica is also an endangered species. Pleurospermum angelicoides Benth. is also largely used as a substitute of A. glauca in Uttarakhand crude drug market (Arya et al., 2012).
The root of A. glauca Edgew. is considered the true source of Gandrayan/Choraka in Ayurvedic text. A. glauca rootstock is yellowish to brownish in color (Figure 3). The odour is characteristically aromatic; fracture is hard and fibrous, root is 2.5 mm thick while for A. archangelica, the root stock is dark grey brown to reddish and purplish brown in color, 5.0 to 10.0 cm thick, fractures is short and smooth (Figure 4). P. angelicoides root is dark brown in color, long conic and aromatic (Figure 6). 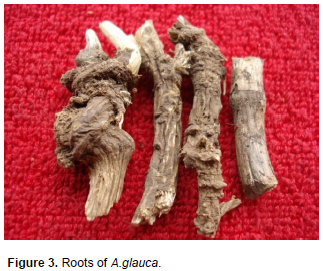 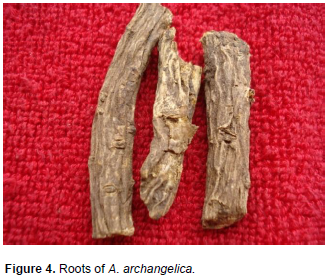 Population study
Angelica was found distributed within the different habitat (steep rocky slopes, moist rocky area) in study area (Figure 5). The performance of the species at different sites is presented in Table 2.
The surveyed plant species was scarily distributed in dry open slopes and sometimes on scree slopes (very high altitude glacial moraines and landslide areas). The low frequency, density, relative density shows the poor availability of the species in particular habitat. During the study in all 9 sites it was observed that the maximum frequency (80%) of the plant was observed in Milam (Moraine) and minimum (40%) at Dwali, maximum density at 1.00 plants/m2 at Phurkia (Scrub) and 0.70 plants/m2 at Martoli, TBC value ranges between 0.51 to 0.72 cm2 showing highest value at Laspa and lowest at Milam (Fellow field), IVI pattern of A. glauca  has highest (10.88) at Milam (Moraine) and lowest (6.76) at Tejam (Figure 7). 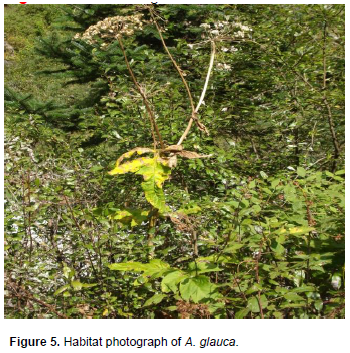 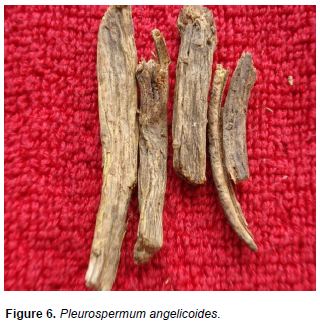 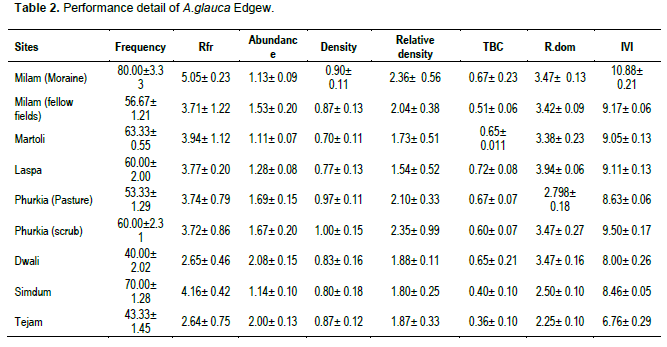 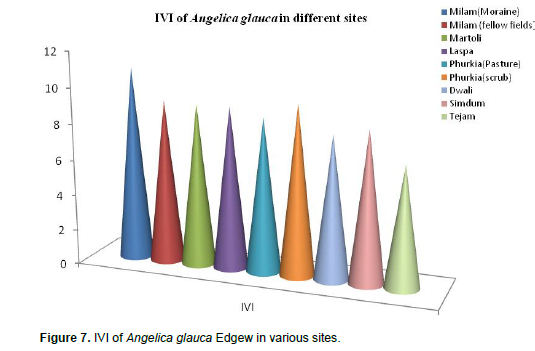 Conservation
A. glauca is endemic to the Himalaya; it is an endangered medicinal herb for which, beside in situ conservation, ex situ conservation is also recommended (Vashitha.et.al. 2006). In the temperate and alpine zone of the Himalaya, there is increasing intensity of harvesting of medicinal plants as change in climatic condition have adversely affected the habitats of many species, leading to a gradual loss in regeneration potential and diversity of many economically valuable species. A. glauca has been  categorized as an  endangered species; large scale  of cultivation   of  threatened   and  economically   important wild plants is the most effective way to sustainable utilization and conservation of biodiversity. Propagation occurs by means of seeds and occasionally through rhizome segments (Vashitha.etl.al. 2007, 2009). Only rhizome segment can be used for vegetative propagation. The collectors of raw material may be suggested to use the terminal part of rhizome for cultivation and utilize the remaining root part for medicinal purpose. Considering the economic potential of these species, the technology has   significant    value    for    both    conservation    and sustainable utilization of A. glauca.

Occasionally, adulteration is prone to occur with expensive materials and with those in short supply. Practically, the phenomenon of adulteration indicates the admission of impurities or removal of all valuable position of the drug or it may be an addition of low grade of spoiled drug with the genuine one; as in A. archangelica, P. angelicoides are mixed with A. glauca because of low population and apparently these plants roots have same appearance and odour. On account of frequency, density, TBC and IVI, A. glauca is an endangered plant in the Kumaon Himalayas. A. glauca is with sparse  population in few areas and is in high demand; to reach the demand adulteration was done. The study also revealed that the natural distribution of the A. glauca narrows down due to habitat destruction. Due to excessive and illegal exploitation, these are no longer found in the accessible habitats in large quantities. Exploitation of A. glauca is going on, and it is facing severe threats hence it was assigned the endangered status. Considering the economic potential of this species, using the terminal part of rhizome for cultivation by farmers have significant value for both conservation and sustainable utilization of A. glauca.