The International Panel on Climate Change (IPCC, 2007) has reported that  by  the  end  of  the  21st  century,  the earth’s climate is predicted to warm by an average of 2 to 4°C. This according to Eitzinger et al. (2010) is due to anthropogenic and natural factors. Smith and Olesen (2010) described the emissions of greenhouse gases from agricultural systems as likely sources of global temperature increase. Extreme temperature has detrimental effect on plant growth and crop yield; this increase causes a reduction in growth and productivity (Southworth et al., 2000).
Wahid et al. (2007) reported that long exposure of high temperature during seed development triggers delaying in germination, seed vigor as well as dry mass reduction; while seed germination and seedling establishment stage play vital role for sustainable cropping the increase in temperature has exposed most of the world’s crops to heat stress during some stages of their life cycle (Grass and Burris, 1995).
Again, the difficulty in the precise prediction of the projected agricultural impacts of climate change further adds to this problem (Watanabe and Kume, 2009). According to Gorai and Neffati (2007), the success of a plant to grow and establish is considerably dependent on optimum germination. As germination is a crucial stage in the life cycle of plants, any alter in this process will in general affect the plants growth and development.
Temperature is a major limiting factor affecting germination in the arid and semiarid areas (Huang et al., 2003; Tlig et al., 2008). Initial establishment of a plant species in high temperature area is related to germination response of seeds to temperature and early establishment usually determines if a population will survive to maturity (Huang et al., 2003; Song et al., 2005).
Liu et al. (2008) reported that temperature has a great influence on the distribution, growth, yield and quality in soybean; the study showed great sensitivity to temperature change. Gan et al. (2004) equally showed seed yields of canola to have decreased by 15% when high temperature stress was applied before flowering. The emergence of rice seeds during germination was delayed when temperature was increased to about 40°C as reported by Akman (2009). Morita et al. (2004) reported the reduction of grain formation of rice at an increased temperature of 34°C. In legumes, high temperature stress during reproductive development may physiologically affect flower abortion, sequent sink site and later pod abscission resulting a decreased number of seed per plant (Duthion and Pigeaire, 1991). Also, high temperature stress during reproductive development negatively affect cell expansion, cotylone cell number and thus seed filling rate, resulting in the lowered weight per seed (Munier-jolain and Ney, 1998). The effect of temperature on germination and seedling growth of Psyllium (Plantago psyllium), Marshmallow (Althaea officinalis) and Fennel flower (Nigella sativa) with regards to germination behavior and seedling growth characteristics is well documented in Saba et al. (2014), while Idikut (2013) has also reported the effects of light, temperature and salinity on seed germination of three maize forms.
Nigeria is said to be the 10th largest producer of maize (Zea mays) in the world, and the largest maize producer in Africa, followed by South Africa (Cadoni and Angelucci, 2013a). While maize is grown in the entirety of the country (both yellow and white varieties), the North Central region is the main producing area. Seventy percent (70%) of farmers are smallholders, with an average 5 ha area of cultivated land accounting for 90% of total farm input. Gourichon (2013) reported Nigeria to be the largest sorghum (Sorghum bicolor) producer in West Africa, accounting for about 71% of the total regional sorghum output. Nigeria’s sorghum production also accounted for 35% of the African production in 2007 (ATA, 2011) of which the country is the 3rd largest world producer after the United States and India. Rice (Oryza sativa) is grown approximately on 3.7 million ha of land in Nigeria, covering 10.6% of the 35 million ha of land under cultivation, out of a total arable land area of 70 million ha. 77% of the farmed area of rice is rain-fed, of which 47% is lowland and 30% upland. The range of grown varieties is diverse and includes both local (such as Dias, Santana, Ashawa, Yarsawaba, and Yarkuwa) and enhanced varieties of traditional African rice (such as NERICA) (Cadoni and Angelucci, 2013b).
As Nigeria is going through a transformation phase in the Agricultural sector to increase production in most of these commodity crops, there is a need to build into it the effects of climate change via increased in temperature on crops in other to ensure a successful transformation that will not only see an increase in food security but also crops that are able to adapt to these changes. With the effects of climate change via increased in temperature already has been experienced in the Northern parts of Nigeria (with an increase to about 42°C) in most cases.
This study is therefore aimed at studying the effects of elevated temperature on seed germination and seedling growth on three cereal crops: sorghum, maize and rice in Nigeria. In determining the physiological effects of increased temperature, the results of this study hopes to show how future temperature induced climatic change will have significant impacts on agriculture. The results of this study hopes to give scientists/policy makers insights worthy for consideration in development of the agricultural transformation agenda in Nigeria.

Collections and sterilization of seeds
The test seeds of sorghum and maize were gotten from the open market in Gwagwalada, Abuja Nigeria, while the rice seeds were provided by Dr. S.A Afolabi’s research group on rice transformation in the Biotechnology Advanced Laboratory, Sheda Science and Technology Complex, Abuja, Nigeria. This seeds were handpicked to make sure the best seeds were used for the experiments then subjected to some sterilization process. The method of Ali et al. (2013) was used for the sterilization process: this involved washing the fresh seeds with distilled water and then treated with 70% ethanol for 20 s followed by sterilizing with 10% sodium hypochlorite (commercial bleach) for 30 min. Seeds were rinsed five times with autoclaved distilled water and then soaked in water for 24 h.
Experimental effects of elevated temperature
Experiment I
After the 24 h soaking, seeds were divided into five groups of 10 seeds in replicates. Seeds were then allowed to germinate on Petri plates with filter paper wetted with distilled water in controlled growth at 37°C (control: room temperature), 40, 42, 45 and 50°C. Seeds were then monitored for 24, 48, 72 and 96 h, respectively. When the radical emerged through the seed coat it was considered as germinated. The number of germinated seeds was recorded daily and in the last day (96 h), traits such as root length and shoot length were measured using five samples from each replicates in centimeters using a ruler. Germination percentage (GP) was calculated according to the methods of Saba et al. (2014) using the following formulas:
Germination percentage (GP) = S/T × 100
S, Number of germinated seeds; T, total of number seeds.
Experiment II
Five (5) seeds each of sorghum, maize and rice were sown in small poly bags in triplicates under the same temperature regimes of 37°C (control: room temperature), 40, 42, 45 and 50°C for 2 weeks. The seedlings were watered every 2 days with equal amount of water (100 ml) After the 2 weeks of growth the seedlings were assayed for the physiological effects on the root, stem and leaf, 2 weeks after germination. The SPSS software was used to show the analysis of variance (ANOVA) at 0.5 level of significance.

Figure 1 shows the percentage rate and germination rate of the three cereal crops as it is affected by different temperature regimes. It was noticed that as temperature increased from 37 to 50°C over a 96 h period, the percentage of germination reduced from 100% to about 60% in rice and 40% in maize and sorghum, respectively. Shoot length of maize plantlets is of 42, 45 and 50°C, respectively. Root length of the maize plantlets also decreased when exposed to 45 and 50°C, respectively (Figure 3). Figure 4 shows the shoot length of sorghum plantlets after 96 h of exposure to different temperature regimes. 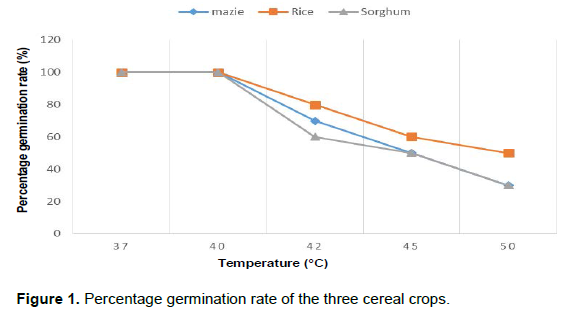 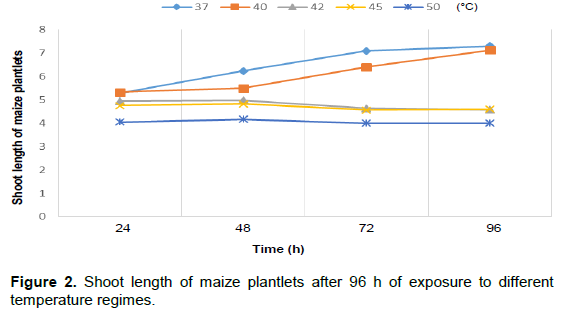 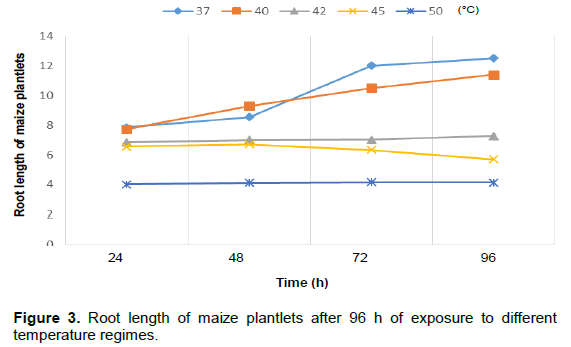 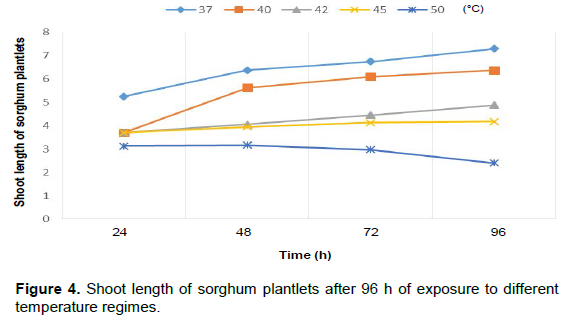 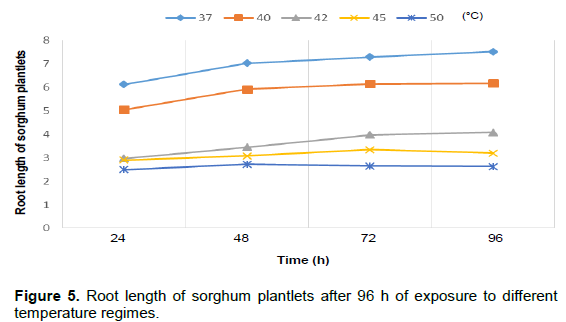 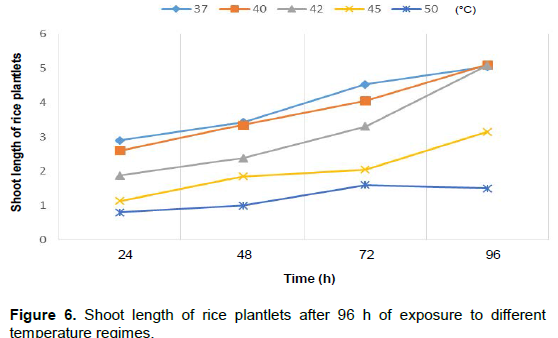 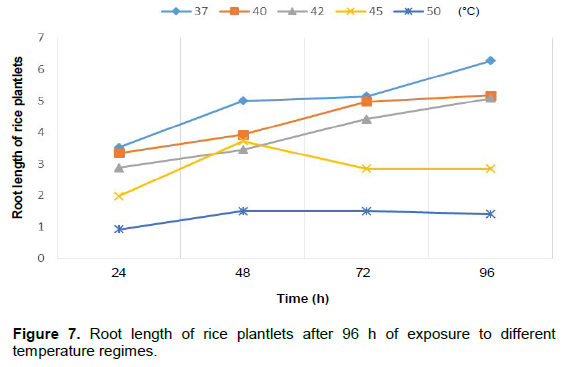 During the life cycle of a plant, seeds have the highest resistance to adverse environmental conditions, whereas seedlings are often more sensitive, and this is especially true for most plant species (Gutterman, 2002). Therefore, successful establishment of a plant species is dependent to adaptive mechanisms of seed germination and of seedling growth (Mijani et al., 2013). This study was able to show that temperature played an important role in germination as seen in the decrease in the percentage germination rate with increase in the temperature regimes. It was noticed that seed germination was reduced from 42 to 50°C when compared with the control 37 and 40°C, respectively. Essemine et al. (2010) have reported that inhibition of seed germination with increase in temperature often occurs through induction of ascorbic acid (ABA). Seeds exposed to very high temperatures in this study must have produced more ABA thus inhibiting germination (Toh et al., 2008). In this study, it was noticed that geminated seedlings showed seedling vigor, reduced radicle as well as plume growth. Kumar et al. (2011) as well as Piramila et al. (2012) have documented these physiological stress coursed by increase in temperature on mungbean (Phaseolus aureus Roxb) and the black gram plant. At very high heat stress (45°C) the rate of germination of wheat was strictly prohibited and caused cell death and embryos for which seedling establishment rate was also reduced (Cheng et al., 2009). Plant height, number of tillers and total biomass were reduced in rice cultivar in response to high temperature regimes (Mitra and Bhatia, 2008). Flores and Briones (2001) studied germination responses of six desert species to elevated temperatures and observed that along with increasing temperature mean germination time was reduced.
Plant growth and development, particularly reproductive processes are affected by temperature more than any other environmental factor when water is not a limiting factor (Thuzar et al., 2010). There was significant decrease (P <0.05) in the physiological parameters (Root length; leaf length, width of leaf and length of stem) in the seedling. Growth decrease due to high temperature could be due to the effects on the reproduction at both organ and process levels (Huan et al., 2000). Kakani et al. (2002) equally reports a possibility of reduction in process levels due to increased temperature regimes.
It was noticed that the plants at 45 and 50°C had a change in texture and color; this has also been reported by Apple et al. (2000). Elevated temperature directly and negatively affected the morphology of the seedlings. Seedlings grown under elevated temperatures had greater numbers of malformed buds, and abnormal needle primordial tissue compared with seedlings in the ambient temperature treatments as reported by Apple et al. (2000). In addition, the seedlings grown under the higher temperatures were shorter and more “bush-like” in morphology, thus hindering their ability to gain height as noticed in this study when temperature was elevated from 45 and 50°C (Olszyk et al., 1998a, b). Note that the present study did not span over the entire reproductive stages. However, Prasad et al. (2003) have reported that despite an increase in photosynthesis, the detrimental effect of high temperature on seed yield was not alleviated by elevated carbondioxide concentrations but rather by the increase in temperature regimes.
High temperature stress has become a major concern for crop production worldwide because it greatly affects the growth, development, and productivity of plants. However, the extent to which this occurs in specific climatic zones depends on the probability and period of the increased temperature and on the diurnal timing of it too (Meehl et al., 2007). Results from this study clearly indicate that the growth of seedlings of maize, rice and sorghum showed signs of stagnation or decrease following rise in different temperature regimes. As the present rate of emission of greenhouse gases gradual increase in the world’s ambient temperature, resulting in global warming vis a vis climate change, plant responses and adaptation to elevated temperatures, and the mechanisms underlying the development of heat-tolerance, need to be better understood for important agricultural crops and this is worth considering in the Nigerian Agricultural Transformation Agenda.