This experiment was conducted during the year 2020-2021 in open field condition at three locations such as Madurai (Kalvelip-atti-L1), Ramnad (Thiruvarangam-L2) and Kunnathur (Peraiyur-L3) of Tamil Nadu, India to assess the effects of organic foliar sprays viz. Panchakavya, vermiwash and cow urine on yield and growth parameters of cluster bean ((Cyamopsis tetragonoloba (L.)Taub.) cv. Pusa Navbahar). Four treatments viz., control (T1), 5% Panchakavya (T2), 5% vermiwash (T3) and 5% cow urine (T4) were tried in Randomized Block Design (RBD) with five replications. The standard recommended cultural practices were followed for all the divided experimental plots. The maximum values of growth parameters like plant height, number of leaves per plant, leaf area, number of pods, pod length (cm), pod weight/plant and pod yield were recorded by the treatment of 5% vermiwash over the control, followed by other foliar sprays. Among the locations, the maximum values of vegetative growth parameters were recorded in the location Kunnathur. Whereas, the maximum values of reproductive parameters like number of pods, pod length, pod weight and productivity were recorded in the location Madurai. The experiment revealed that vermiwash (5%), Panchakavya (5%) and cow urine (5%) can highly be recommended as foliar spray to reap high quantity clusterbean and benefit the farmers as well as consumers.

The cluster bean [Cyamopsis tetragonoloba (L.) Taub. (Syn. C. psoraliodes)] is a bushy annual herb having a deep rooted system, and a resilient and drought resilient leguminous crop grown on sandy soils of arid and semi-arid regions. Cluster bean is a rich source of proteins, dietary fiber and also contains minerals namely phosphorous, calcium, iron, potassium and with zero cholesterol and fats. Pusa Navbahar (Pusa Mausami × Pusa Sadabahar) is a popular variety of cluster bean for vegetable  purpose   that  is  grown  for  its  young  tender green immature pods with maximum yield. Pusa Navbahar is a single stem variety and the pods are of 15 cm with better quality. Gum obtained from cluster bean seeds is a choice of agrochemical in paper, food, cosmetics, textile, oil and pharmaceutical industries across the world (Bhatt et al., 2017). The world’s total cluster bean production has been figured to be around 7.5–10 lakh tones every year. The production list of cluster bean is dominated by India as leading producers of the crop in  the world contributing to around 75–82% of the total production. The variety Pusa Navbahar was released from Indian Agricultural Research Institute, New Delhi. It matures 45 to 50 DAS and attains height 50 to 60 cm. The average yield of variety is 10 to 15 q/ha.  The use of inorganic fertilizers has been associated with reduced crop yield, soil acidity and nutrient imbalance, creates poor physical properties of the soil and nutrient retention characteristics; hence adversely affects crop growth and yield (Ballal and Kadam, 2016). Organic farming reduces the risks of human, animal, and environmental exposure to toxic materials and also helps in recycling animal wastes back into the farm. Therefore, the application of plant nutrients through organic sources like Panchakavya, vermiwash and cow urine remains a good choice for maintaining its quality and sustainable yield (Sharma, 2012). Somashekar et al. (2018) suggested that promoting low cost organic practices will not only increase the yield of the crop but also improves the fruit quality and enhance the shelf life of the fruits.

The field experiments were conducted in three locations viz., Madurai (Kalvelipati), Ramnad (Thiruvarangam) and T.Kallupatti (Kunnathur) during Kharif season of 2020. The authentic source of Cluster bean seeds of Pusa Navbahar) and the organic foliar spray products like Panchakavya and Vermiwash were purchased from Private Seed Farms and fertilizer shops. Cow urine was freshly collected from desi cow and diluted at 5% concentration by adding water. The experiment was laid out in randomized block design (RBD) and replicated five times. The treatments were randomly allotted to different plots, using random number table of Fisher and Yates (1963). Standard agronomical practices were followed in all plots. Panchakavya, Vermiwash and Cow urine were applied as per treatments through foliar spray at 5% concentration during 20 and 30 Days After Sowing (DAS).

Five plants were randomly selected in each plot in each treatment and tagged (Table 1). Five plants tagged from each plot were used to measure all the biometric parameters. The height of each tagged plant was measured at 25, 35 and 45 Day After Sowing (DAS) and at harvest. The plant height was measured in meter scale from ground to tip of the plant apex. Number of leaves was counted at 25, 35 and 45 DAS from five tagged plants. The fully expanded leaves were separated from the plant, and leaf area was immediately determined (Table 2 and Figure 1). Edible pods from each treatment were taken and fresh weight was noted.

The experiment was laid out in randomized block design and replicated five times. The treatments were randomly allotted to different plots, using random number table of Fisher and Yates (1963).

The crop was harvested on end of October, 2020. The pods were harvested treatment-wise manually at the right marketable stage (field maturity). All the clusters arising on the tagged plants were counted. Finally, the average was calculated to record number of pods per plant. Randomly, ten edible pods were selected from the harvested pods from the tagged plants at peak fruiting time. The length of each pod was measured from head to tip. The pods were collected from tagged plants in treatment-wise and weighed in electronic weighing balance. Pod yield was recorded separately for each plot, summed in order to obtain the pod yield for a plot and then weighed in spring weighing scale.

The data were analyzed by following the standard procedure of Panse and Sukhatme (1967) and the differences between the treatments were estimated at 5% level of significance.

To find out the most profitable treatments, economics of different treatments were worked out in terms of net return per acre. Benefit:Cost (B:C) ratio was also calculated treatment-wise by the following formula to ascertain economic viability of the treatments.

The plant height was found to be highly significant interaction effect between location and duration of crop. Among the treatments, the maximum plant height was recorded in treatment vermiwash (T3) with the average height of 44.2 cm and the minimum plant height was recorded by Control (T1) with the average height of 39.56 cm. Better environmental condition of the soil might have helped in increasing the absorption and transportation of nutrients towards the developing part of the plant (Table 3). There was no significant interaction effects between treatments and locations.

Somashekar et al. (2019) concluded that Gangajal-1 variety performed well in organic bitter gourd cultivation. The bitter gourd crops was provided 3 foliar sprays of Panchakavya (3%) at 20, 40, 60 DAS and vermiwash (10%) AT 25, 50, and 75 DAS. This foliar application increased the quality and shelf life of the plant.

Among the treatments, the maximum pod length was recorded in treatment vermiwash (T3) with the average length of 13.97 cm which concurred with the findings of Sudhanshu et al. (2018) and the minimum pod length was recorded by Control (T1) with the average length of 10.66 cm (Table 5 and Figure 2). Sivasubramaniam et al. (2012) tried various bovine urines to invigorate the pulse seeds and recommended that pulse crop viz., green gram, cowpea and grass gram seeds biofortified with 5% cow urine performed well in terms of germination percentage, speed of germination and vigour index. Significantly higher plant height, leaf dry weight, and more number of tillers were recorded 60 days after sowing, higher leaf area duration and higher straw yield were recorded for wheat seeds soaked in 10% cow urine (Shivamurthy and Patil, 2010). 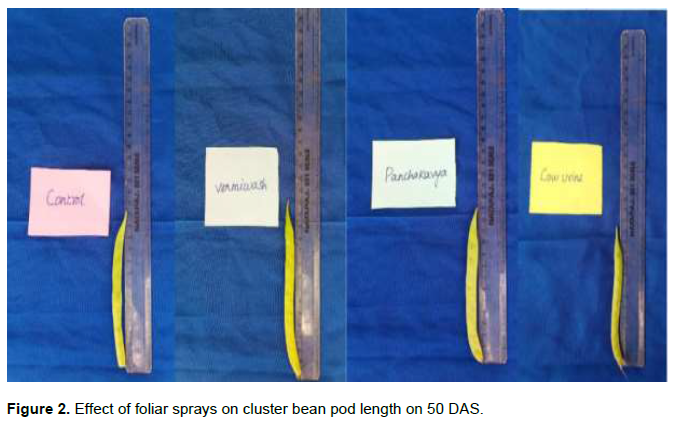 Vermiwash proves to be an effective foliar spray which contributes the growth, yield of plants and also observed less insect-pest population. Experiment shows that vermiwash along with vermicompost can be used as a substituent of commercial fertilizers available in market (Sudhanshu et al., 2018). The greatest response from the plants could be observed only when the vermicompost was used at 10-4% in blackgram which was reported by Parthsarath et al. (2008). Panchakavya application increases the immunity power in plants,  confers  resistance  against  pest and diseases and also provided various beneficial metabolites produced by microorganisms. Thus, Panchakavya plays a major role in organic farming (Pramod et al., 2018). 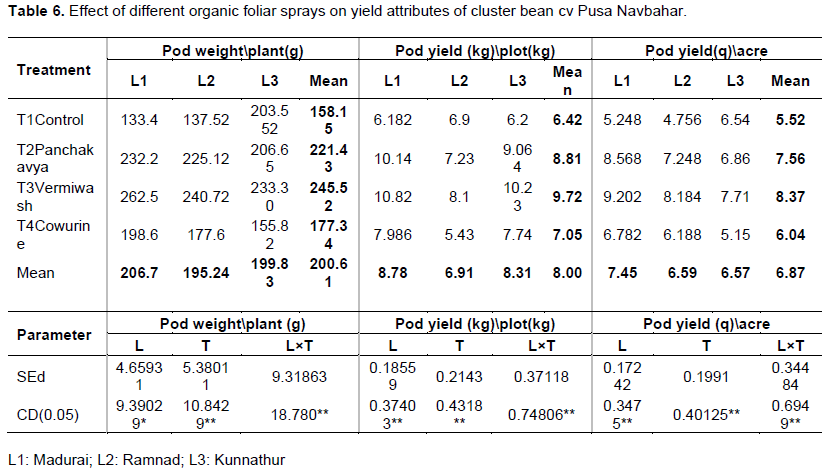 The cow urine treatment with 1:10 concentration was found very suitable to treat seeds of finger millet for good germination and seedling vigour (Shankaranarayanan et al., 1994). Cow urine can be recommended as organic seed priming in cluster bean for increasing the germination percentage, root  length, shoot length, vigour index I and vigor index II among different concentrations (control, 4%, 6%, 8%, 10% and hydro priming) in cluster bean under rain fed condition (Ambika and Balakrishnan, 2015). Zambare et al. (2008) reported that application of vermiwash has shown sustainable growth in terms of appearance, cost effectiveness ease of availability, time saving, reproduction, eco-friendly and reliability. Vermiwash seems to have an intrinsic property; it acts not only as a liquid organic fertilizer but also as a mild biodegradable, which can be used as an effective input in organic farming for both soil health and disease management  for  sustainable  crop  production (Shaon et al., 2014).

Therefore, the present experiment concluded that vermiwash (5%), Panchakavya (5%) and cow urine (5%) can highly be recommended as foliar spray to reap high quantity cluster bean and benefit the farmers. Besides high yield, the environmental pollution and soil pollution by chemical sprays’ residues can also be controlled.

The authors are very grateful to the management of Kalasalingam Academy of Research and Education for providing authentic seed materials and guidance to conduct the field experiments in various locations. The authors would like to thank Ms. Sushma for sharing her field to accomplish this experiment.