Prostate cancer is the leading cause of mortality in men worldwide, and dietary fat influence its incidence. This study investigated the effect of feeding Tetracarpidium conophorum seed oil (TCSO) on 3-methylcholanthrene (MCA) induced prostate cancer in Wistar rats, the expression of cyclooxygenase-2 (COX-2) and peroxisome proliferator activated receptor gamma (PPAR-?) in the prostatic tissues. The TCSO was extracted with n-hexane in a Soxhlet apparatus and characterized by gas chromatography. Forty-eight male wistar rats (4 weeks old) were divided into three groups of 16 rats each and fed for 12 weeks. Group A and B animals were fed with diet containing TCSO extract. The animals in Groups A and C received intraperitoneally a dose of MCA (150 mg/kg) after 30 days of feeding. Groups A and B rats were fed with diet containing 10% of extracted TCSO throughout the period of the experiment. Results showed that COX-2 activity significantly decreased (p < 0.05) in Group A (0.71±0.07) and B (0.60±0.05) when compared with Group C (1.17±0.10) with increased COX-2 expression. PPAR-gamma activity was significantly increased (p < 0.05) in Group A (1.89±0.13) and B (2.30±0.15) in comparison with Group C (1.16±0.10) which has the lowest PPAR-gamma expression. TCSO extract delayed latency period in Group A where lumps were observed after 4 weeks of 3-methylcholanthrene induction in comparison with Group C where lumps were observed in less than 2 weeks of MCA induction. Gamma-linoleic acid, docosahexaenoic acid and myristoleic acid were higher in the liver cell membrane of animals in Group A compared to animals in Group C. This work therefore showed that TCSO contains bioactive components that may oppose prostate carcinogenesis induced by MCA.

The modulation of cancer by nutritional variables has been a subject of interest and controversy. Dietary fat has received considerable attention as a possible risk factor in the aetiology of prostate cancer (Uhunmwangho and Omoregie, 2017). The second report by the World Cancer  Research Fund  and  the  American  Institute  for Cancer Research indicates that food and nutrition may affect the status of hormones that can modify prostate cancer risk. Both the quantity and quality of dietary fat influence the development of spontaneous as well as chemically-induced neoplasm in laboratory animals. Dietary  fat  is  an essential nutrient and important source  for the essential fatty acid (FA), α-linolenic acids, linoleic acids, dihomo-dietary-?-linolenic acid (DHLA), docosahexaenoic acid (DHA), and eicosapentaenoic acid (EPA) which contributes to appropriate growth, development and anti-proliferative diseases, with cancers especially domicile in Tetracarpidium conophorum oil.

African walnut (T. conophorum) is a well-known plant in West Africa. The fruits are edible and the bark, leaves, stem and roots are used in ethno medicinal practice against diseases (Ajibesin et al., 2008). Walnut plant is cultivated principally for the nuts which are cooked and consumed as snacks, along with boiled corn (Adebona et al., 1998). Verheij (2002) have reported on the high nutrient potential of conophor nut.  Also, the impacts of traditional processing in the nutrient and sensory qualities of the fruit have been reported (Adebona et al., 1988). A biscuit–like snack food from conophor fruit have been developed throwing some light on the functional significance of the oil seed. African walnut comprises such families as Juglandaceae (English walnut), Euphorbiaceae (African walnut) and Olacaceae (African walnut). Each family has its own peculiar characteristics but they have some things in common such as the nuts. Juglandaceae is mostly found in the Southeast Europe to Japan. T. conophorum (family Euphorbiaceae) is found in Nigeria and Cameroon while Coula edulis (family Olacaceae) which is also referred to as African walnut is found in Congo, Gabon and Liberia (Adebona et al., 1998).

Information on the consumption and composition of T. conophorum oil is far from complete, as the oil becomes more popular and is increasingly commercialized, with such information indispensable for proper valorization of the seed oil. Efforts made so far to optimize the economic and to a lesser extent the nutritional values of the fruit have emphasized their ethno medicinal uses and mineral content, but largely ignored how other components especially the oil content, could be utilized to supplement the nutritional and protective needs of the consumer. This means therefore, there is a need to ascertain the role of T. conophorum oil influences on the carcinogen metabolizing enzymes by which it may exert anti-cancer effects. In this study, we shall investigate the effect of feeding T. conophorum oil on 3-methylcholanthrene in male Wistar rats.

This study was conducted in the Department of Biochemistry Laboratory, University of Medical Sciences, Ondo City, Ondo State, Nigeria.

Fresh T. conophorum fruits were obtained from farms in Ondo Town, Ondo State, Nigeria. The fruits were authenticated by a Taxonomist of the Botany Department, University of Medical Sciences, Ondo, Nigeria. At each harvest, 40 fruits will be collected randomly from three regions of the plant as follows, apical region - 10 fruits; middle region – 15 fruits; basal region - 15 fruits. The collected fruits were cleaned with a moist soft cotton wool and then the seeds were carefully separated from the fruits and dried at 65°C for 4 h in an oven, crushed with a laboratory mortar and pestle and were kept in a well labeled air tight polythene bags or screw-capped bottles at 4°C for extraction.

Extraction of oil from African walnut

The Soxhlet extraction method according to AOAC (1996) was employed. The sample (5.0 g) was weighed into a weighed filter paper and folded neatly. This was then placed inside the pre-weighed thimble. The thimble with the sample was inserted into the Soxhlet apparatus and extraction under reflux was carried out with the n-hexane (40-60°C boiling range) for 6 h. At the end of extraction, the thimble was dried in the oven for about 30 min at 100°C to evaporate off the solvent, cool in a desiccator and later weighed and kept in the refrigerator.

At necropsy, the prostatic tissues were exposed and tumors excised. Tumor incidence, volume and weight were determined. Animals from each group were sacrificed at 5, 13 and 21 weeks, and the serum and tissues collected for enzymes and biochemical analysis. Portions of the prostatic tissue from no tumor bearing and tumor tissue were preserved in RNA later for gene expression studies. Another portion of tumor tissue was fixed in formalin (10%) for histopathological studies.

The liver samples were placed in triazole (a molecular grid RNA isolating reagent). The samples were homogenized and chloroform added for homogenate gradient separation. This was followed by centrifugation at 15,000 rpm for 15 min. After centrifugation, the upper phase (clear supernatant containing RNA) was aspirated into a new sterile Eppendorf tube of 1.5 ml. The clear supernatant was precipitated by adding isopropanol. This was followed by centrifugation at 15,000 rpm for 5 min. RNA pellet was air-dried for 15 min and resuspended in nuclease free water (30 µL). RNA samples were quantified and absorbance was checked using a spectrophotometer. RNA samples were optimized using PCR machine for 1 h at 42°C. The samples were amplified and gel electrophoresis was carried out at 70 volts, 500 milli amperes for 10 min; thereafter the samples were placed in UV documentary for viewing the expression bands.

Table 1 summarizes the data on incidence, latency period, weight and volume of prostate tumors in the prostatic tissues.

The major unsaturated FAs were gamma linoleic acid and docosahexaenoic acid as shown in Figure 1. 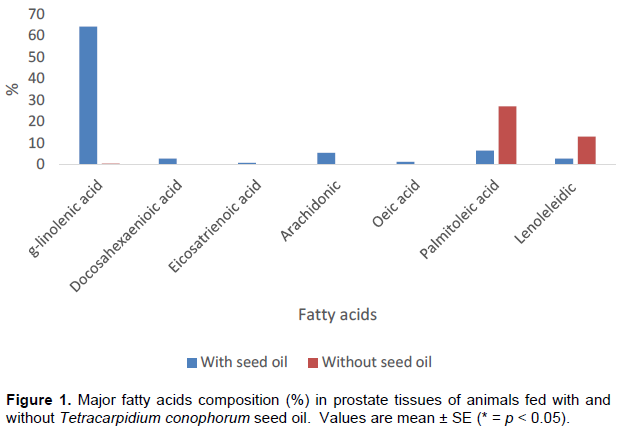 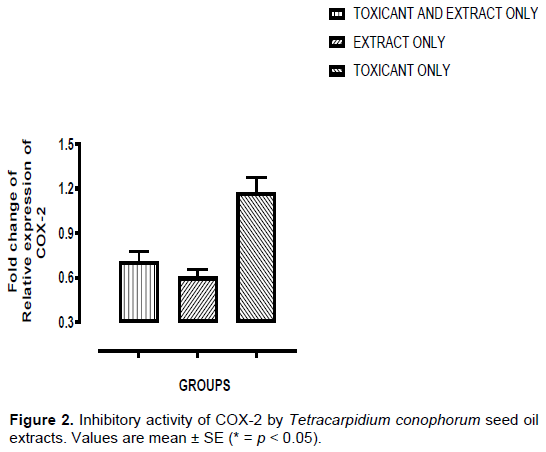 Research has indicated that T. conophorum oil has anti-cancer activities (Olaniyi et al., 2016; Uhunmwangho and Omoregie, 2017). Anti-carcinogenic activity of T. conophorum is assessed by the antioxidant and anti-inflammatory activities exerted on the 3-methylcholanthrene induced male Wistar rats. Olaniyi et al. (2016) reported that T. conophorum seed oil inhibited inflammation, and Abam et al. (2013) reported that walnut oil acted as an antioxidant in ameliorating the toxic effect of cadmium in the liver, kidney and brain tissues due to the presence of high amounts of bio-flavonoids. Flavonoids intake has been associated with a reduced risk of several chronic diseases with their mechanism of action being attributed to their capacity for anti-oxidation, anti-inflammation, anti-proliferation and modulation of signal transduction pathways. T. conophorum has been suggested to inhibit proliferation of human cancer cell lines via an inhibition of the production of Nitrogen oxide (Casanova et al., 2012). According to Table 1, due to the presence of polyunsaturated fatty acids in T. conophorum seed oil, fewer tumor incidence, smaller tumor size and greater tumor latency period wa observed on T. conophorum seed oil treated group than on the MCA only group, which is suggestive of protection conferred by T. conophorum seed oil in prostate gland carcinogenesis.

Polyunsaturated fatty acids possess diverse bioactivities. Gamma-Linolenic acid is an omega-6 polyunsaturated fatty acid which is associated with anticancer activities both in vitro and in vivo (Uhunmwangho and Omoregie, 2017). Dietary supplement of gamma-linolenic acid reduced tumor growth in an implanted WRC256 rat model (Colquhoun, 2002). More interestingly, gamma-linolenic-induced cytotoxicity has been shown to exhibit high selectivity toward cancer cells with no significant effect on normal cell growth. Series of study also suggested that 3-7 days of incubation with gamma-linolenic acid could selectively induce cell death in various human cancer cell lines including prostate cancer cell PC-3 without affecting normal cell growth (Dan, 2006). Myristoleic acid is a monounsaturated fatty acid that is biosynthesized from myristic acid by the enzyme Stearoyl-CoA desaturase-1. Naoya et al. (2001) reported that myristoleic acid is a cytotoxic component in the extract from Serenoa rapens which induce apoptosis and necrosis in human prostate LNCaP cells.

From Figure 1, percentage of gamma-linolenic acid, eicosadienoic acid, eicosatrienoic acid and docosahexaenoic acid, were high in animals treated with the seed oil in comparison to animals not treated with T. conophorum seed oil. This result showed that the polyunsaturated fatty acids resident in the T. conophorum seed oil has the capacity to exert molecular influence on COX-2 and PPAR-gamma protein expression  leading  to the prevention of prostate carcinogenesis.

T. conophorum seed oil protects against MCA induced prostate carcinogenesis and the effect is mediated through decreased expression of COX-2 and increased expression of PPAR-γ. Further work is needed to understand the apoptotic singling, cell proliferation and prostaglandin synthesis in response to dietary fat.