This paper proposes a new application of principal component regression (PCR) for estimating electrical energy consumption in case of abnormal automatic meter reading (AMR) systems. These events occur in a delivery metering system such as problems from mistakenly setting and connecting meters in electrical systems, broken metering accessories, etc. The estimation is performed by using MATLAB. The unclean sampled input data is used to estimate the target output data. The mean absolute percentage error (MAPE) is used as estimation performance. In this proposed estimation, load profiles obtained from the AMR are used as input data for training to create estimation model and for testing to validate model. Estimated results are verified by comparison between the proposed PCR application and other applications such as simple linear regression (SLR), multiple linear regression (MLR). The proposed PCR gives the best error results of MAPE for the lost electrical energy estimation.

Presently, technologies of energy meter have developed rapidly (Alahakoon and Yu, 2016). In particular, the cost of energy meter technology is greatly reduced. The reason is that most electrical energy providers pay attention in the energy meter technology development and the energy consumption data record system for the customer monthly payment operation. In the past, most electrical energy providers chose a mechanical or electronic meter for the electrical energy consumption measurement of the customer and the monthly energy payment operation, because of the price which was lower than a smart meter. But in the present, those electrical energy providers have required database technology, energy management and electrical energy consumption history. An automatic meter reading (AMR) is used for those requirements and designed to be used with smart meters (Paris et al., 2014; Stephen et al., 2014). A smart meter has more advantages than the electronic meter in electrical energy consumption history capacity that data history period limit is 45 days and the cost of both gets nearly closer in the present. So this is inclination that the mechanical meter usage is decreased and the mechanical meter will be replaced by the smart meter in the present day and the near future. The prominent feature of electrical energy data recording in the smart meter is specified to be used with the AMR which the electrical energy consumption data in the energy meters for all customers will be recorded at the database of the AMR. Smart grids are the extension, which themselves are built upon AMR systems (Arif et al., 2013; Khan et al., 2014).
AMR systems are achieved by using many communication technologies, including power-line, radio frequency and mobile network such as GPRS/GSM. As many energy providers look for upgrade progress toward smart grids, replacing mechanical meters by the entire infrastructure may not be economical. For that reason, most smart grid developing providers have formulated priority of suitable smart grid development region. In Thailand, provincial electricity authority (PEA) has formulated framework of smart grid (Meenual and Thongchai, 2009). Current smart grid development of PEA is in the preparation stage, including suitable PEA smart grid Technologies selection and adaptation, implementation plan setting, and necessary PEA smart grid foundation development. PEA intends to aim at pilot project of PEA smart grid in the near future. Currently, a soft computing method is widely used to determine the reliability of the distribution system or to predict the electricity load demand (Singh et al., 2013). The classification of distribution system loss in case of the economical profit can be defined into two items, namely technical loss and non-technical loss. The technical loss occurs by loss of transmission line and equipment in distribution line like copper loss. Unlike technical loss, non-technical loss is caused by abnormal metering equipment or violation and meter tampering by customer. There are several methods used for the non-technical energy loss estimation which is aimed to claim payment from customers in case of energy theft or damaged equipment by customer or forced majeure.
One method commonly used by most providers to estimate is the average monthly electricity consumption of the previous three months abnormal, or three months after an abnormal ending for consideration of that estimation. Those methods have limitations in affecting the performance and reliability of the estimation. Especially, the condition of the electrical consumption behavior will be relatively stable and continuous. There is rarely research on the lost energy estimation in abnormal metering of electricity customer such as using simple linear regression (SLR) with a focus on a minimum variable input reduction for estimation of output, but some significant data is limit. The multiple linear regression (MLR) (Black and Henson, 2014) was used to estimate for improving the limitation of SLR application. However, MLR is still limited in the case of uncleanness of input data to be used for simulation of the model in some times. In this paper, the sampled data is considered from the energy consumption data of the industrial energy customers in Thailand. These energy data will be managed by using AMR system (Ladarat and Naetiladdanon, 2015) of PEA in Thailand. The energy data history recorded in the data center of AMR will be used to increase the efficiency of the energy data management for customers and providers. Thereafter, the load profile of energy consumption will be used as input data for the real energy estimation in case of the abnormal metering system.

In the present study, most energy providers have more interest in the automatic meter reading (AMR) (Figure 1). This is the reason why many business factors have become a necessity for the advantage in business competition, such as the cost saving capacity of energy providers and the energy saving by monitoring and management of customers. The main part of an AMR system is electrical energy usage measure and recording equipment. The smart meter is an important electrical measure equipment, like a joint of service and communication between providers and customers in real time. The communication system is necessary for AMR as it plays an important part in energy consumption data transmission automatically, such as load profiles, monthly billing data, and alarm logs of the smart meter. These data will be transmitted to a meter interface unit (MIU) and be saved in the database of AMR system (AMR data center) for every fifteen minutes. Therefore, the energy provider can take advantage of the energy consumption data monitoring for non-technical loss or illegal electricity usage detection (Erdene et al., 2013). Similarly, the customers can observe and manage the self-energy consumption demand. 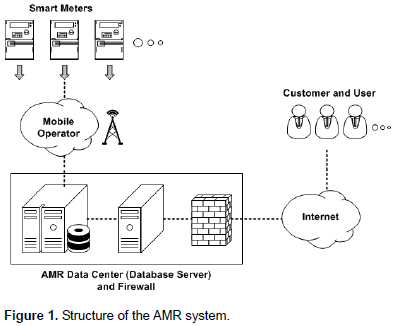 Linear regression analysis for the electrical fields has been widely used in the load demand forecasting. Normally, the algorithm of linear regression is classified into two types according to the number of input data, including single linear regression (SLR) in case of single input data and multiple linear regression (MLR) in case of multiple input data. In this case study, both SLR and MLR are used for a comparison with the proposed algorithm. Figure 2 shows the proposed algorithm of the principal component regression (PCR) models consisting of MLR and the principal component analysis (PCA). The estimate procedure of regression has two parts, including model creation and estimation. The regression learns a function that maps input variables to their target output. Conventionally, that function is a static function enabling the estimation of responses for new input variables. The multiple regression model can be expressed as: 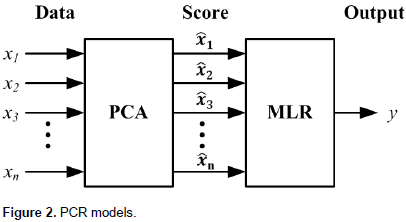 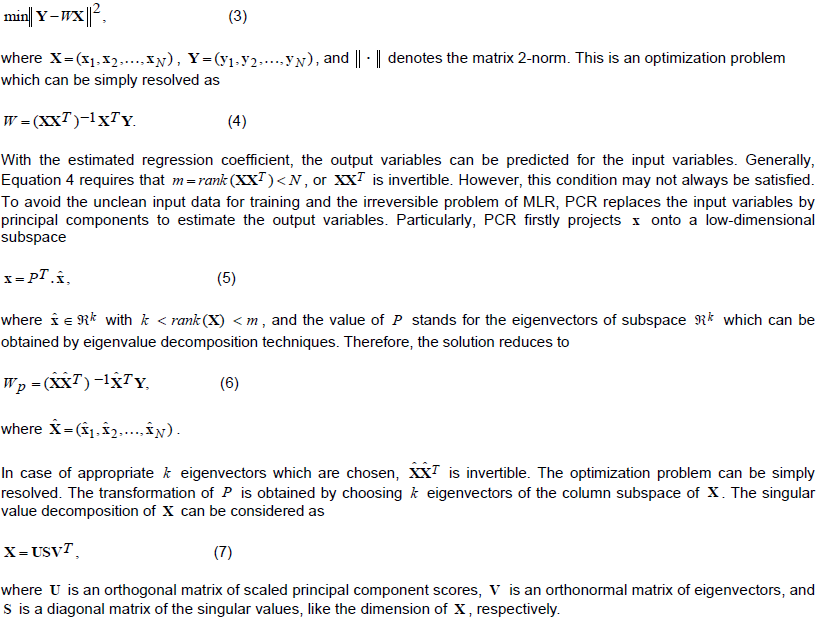 In this case study, the aims are to estimate the energy consumption data of an industrial electricity customer of PEA in Thailand. This will be used in case of the non-technical loss energy which is the results of the abnormal metering from the AMR system in every fifteen minutes. And then, the data selection and statistic error will also be shown here in this work.
Data selection
The proposed PCR is used for the electrical energy estimation which is created in two models, including training model and testing model.The variables of training model consist of the sampled input data and the sampled output data. The sampled input data are the voltages and the currents, whereas the sampled output data is the energy equivalent to one kilowatt of power sustained for one hour (kWh). Those are recorded before abnormal metering data period. The variables of testing model consist of the sampled input data. These are the voltages and currents recorded during abnormal metering data period. The parameters of the model simulation are used in the proposed PCR application. As shown in Table 1, items are the abnormal and normal input variables, the input PCs variables, and the output variables in units of kilo- watt hours, which are used for the estimation. The flowchart for the process estimation of electrical energy consumption by the PCR application is proposed as shown in Figure 3. 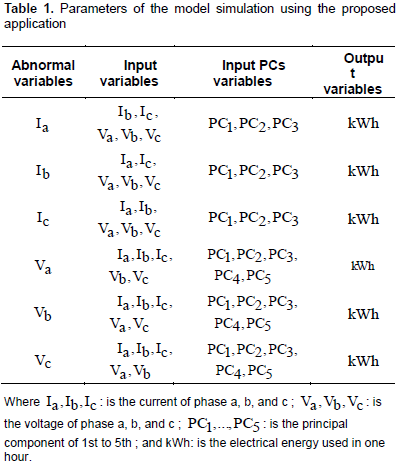 Statistic error
In this paper, the statistic error can be calculated by using mean absolute percentage error (MAPE) which is widely used in forecasting fields. Because the results of this case study are for every fifteen minutes energy estimates, MAPE was also used to evaluate the estimate accuracy for every fifteen-minute energy. The formulas are expressed as follows, 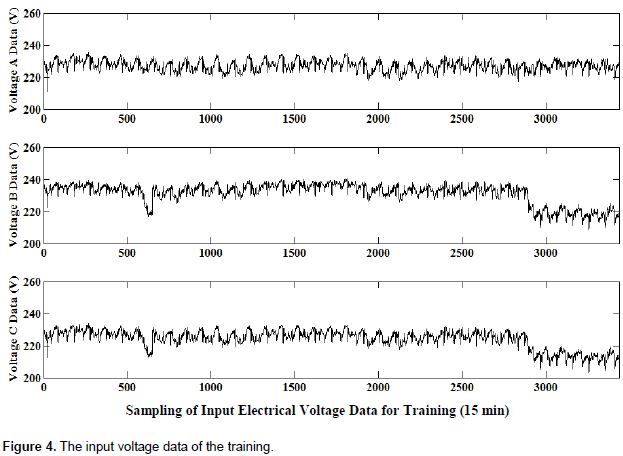 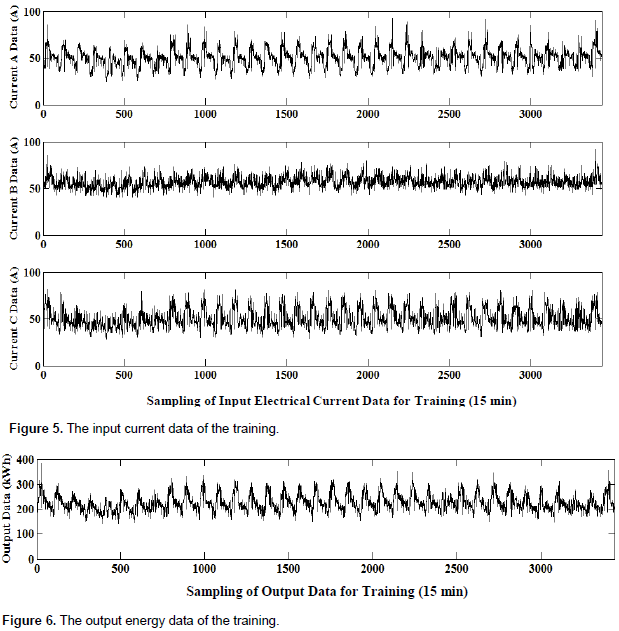 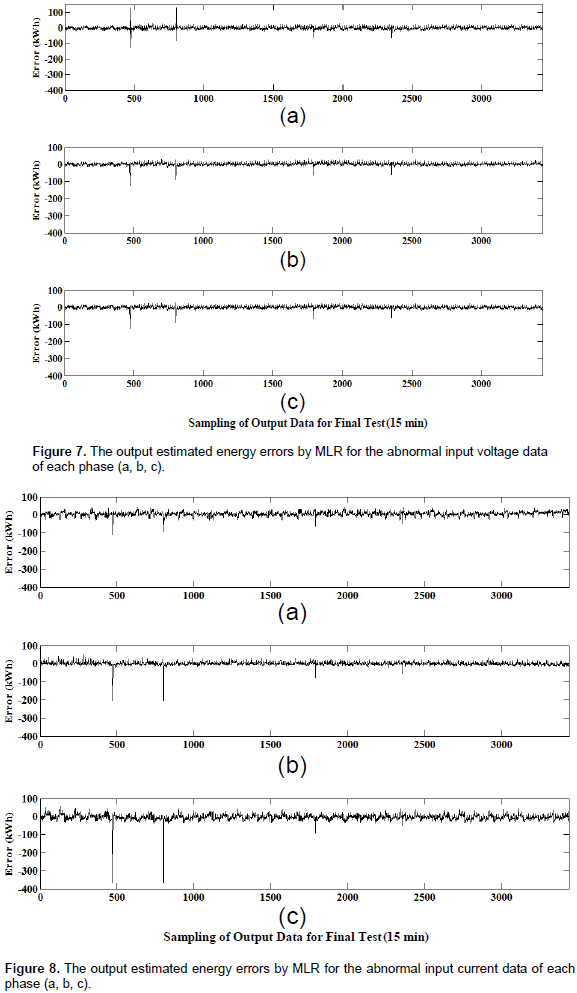 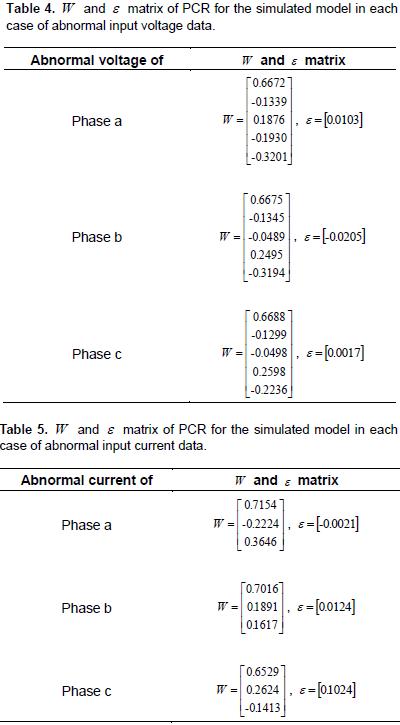 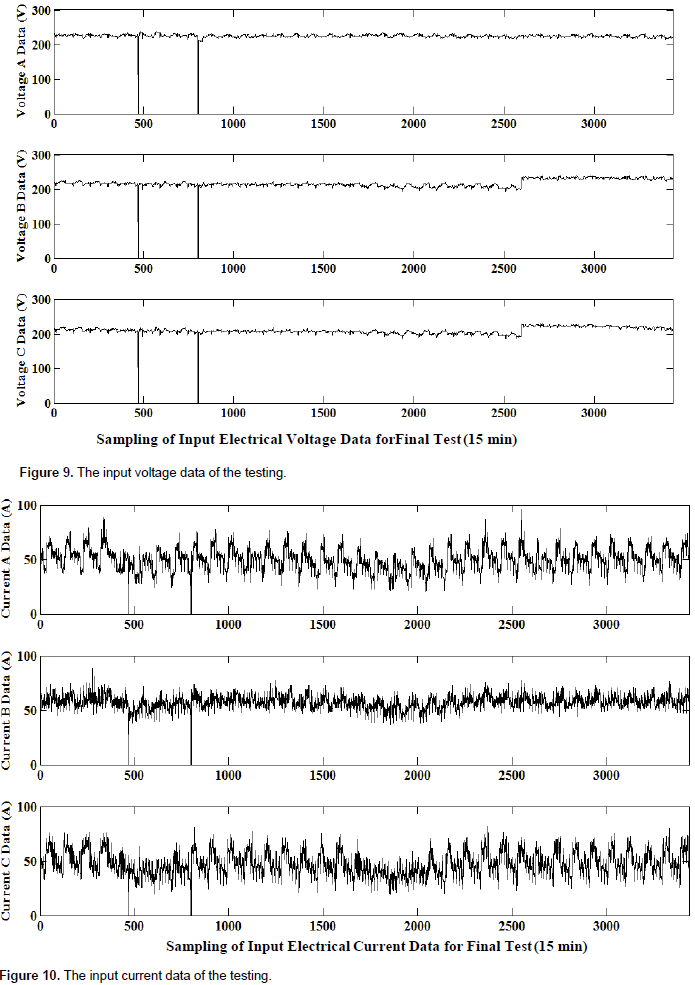 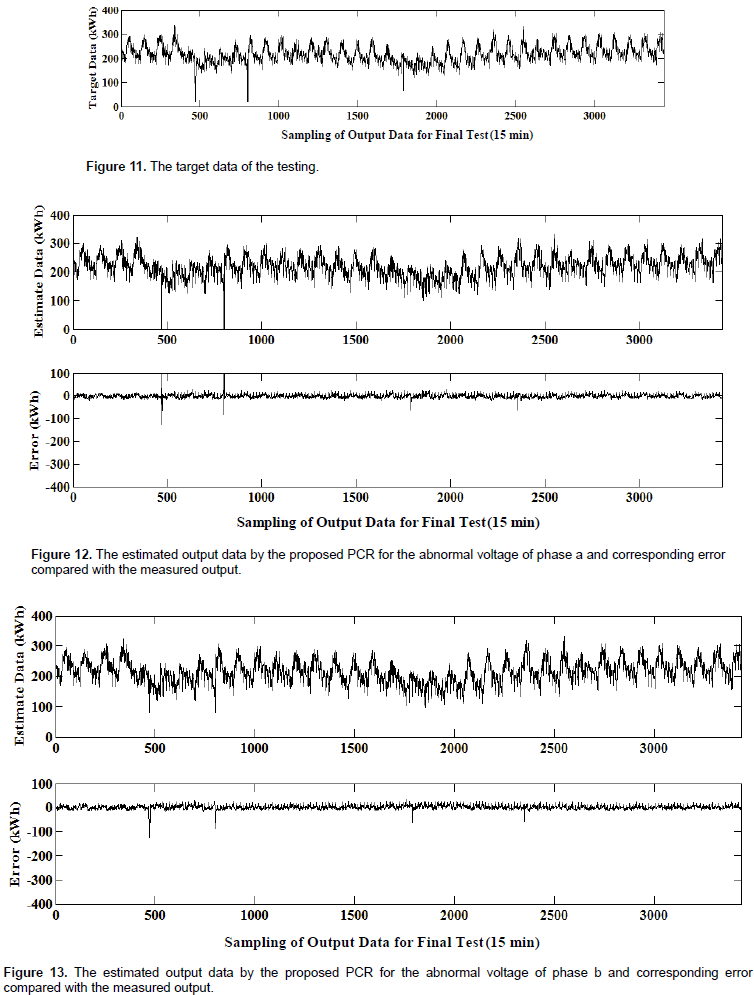 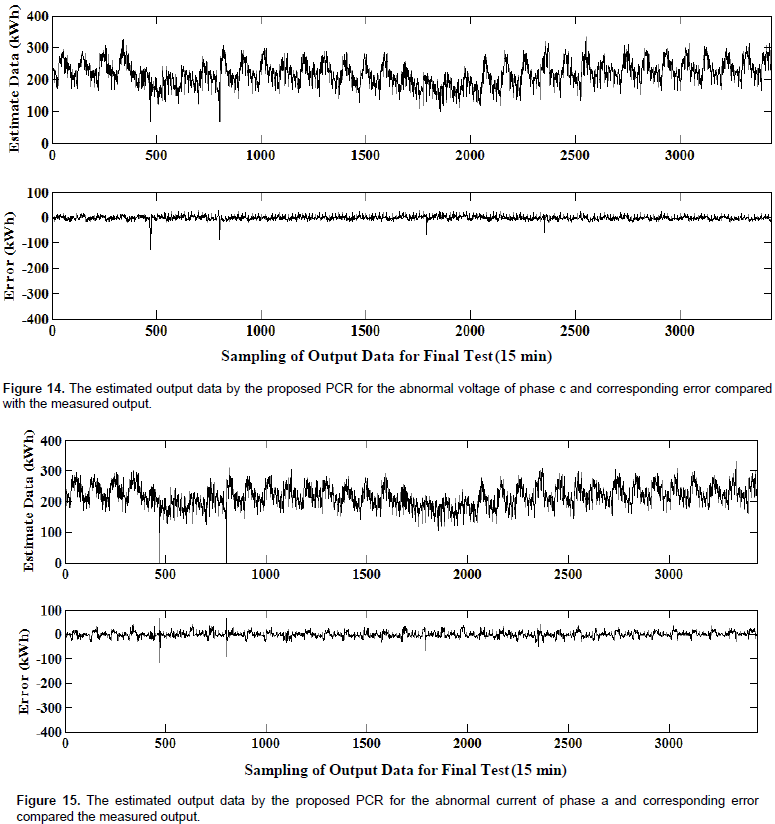 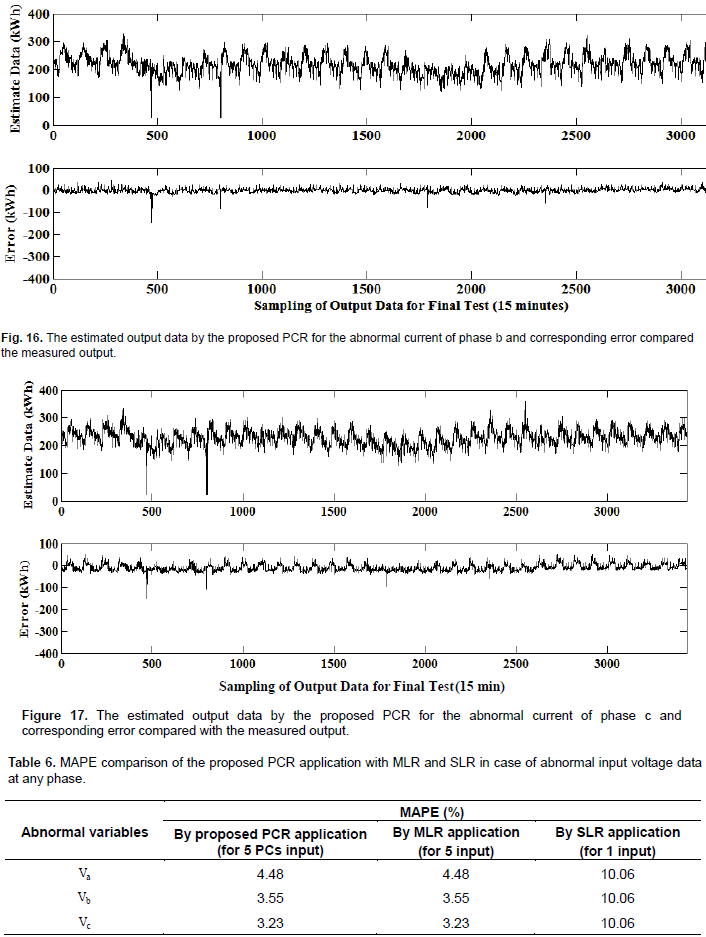 This paper has proposed a new application of PCR in estimation of electrical energy consumption in case of abnormal metering in an AMR system. The error results in this paper show effective performance of the application using the proposed PCR. The simulation results and comparison results between the proposed PCR, MLR and SLR have shown that the MAPE for the proposed application is the best error when compared to that for MLR and SLR of the estimation in case of the abnormal input voltage or current data at any phase. In the difference, MLR is estimated by using 5 normal input data, or SLR is estimated by using the best only 1 input data selection for the output energy estimation.

The authors express special appreciation and thanks to all who have directly or indirectly supported this project to its successful completion, along with PEA of Thailand for all useful information provided. Also, this work was supported in part by the Thailand Research Fund under grant No. IRG5780006.