Plants’ leaves contain nutrients that are of importance in nutrition for growth, development and production in man and animals. They are sources of protein, carbohydrates, pigments and minerals in human and animal food/feed. However, the presence of anti-nutritional factors such as oxalate, saponins and tannins limit the effective utilization of the nutrients in some of these leaves as sole ingredients or components of animal feeds by binding to digestive enzymes and some dietary proteins particularly in monogastrates (Aletor, 1999; Fasuyi et al., 2007). Tithonia diversifolia, Mexican sunflower plant, grows as weeds in many part of Southwest Nigeria acting as fallows on farmland, component of compost for organic manure and as aphrodisiac where the extracts are used as medicaments in human and animal (Ayeni et al., 1997; Adoyo et al., 1997; Inoti, 2000; Olabode et al., 2007; Akinola, 2014). T. diversifolia leaves have been documented to contain 18 to 21% crude protein (CP), 15 to 18% crude fibre (CF), 13 to 15% ash, 2.81 to 5.6% ether extract (EE) and 44.38 to 52% nitrogen free extract (NFE) by various workers (Olayeni, 2005;  Fasuyi et al.,  2007; Ekeocha, 2012). The proximate compositions of leaves have been reported to vary with cutting interval or age. Tannin content in cassava foliage was reported to increase at longer cutting intervals as high as 3.5% of the dry matter for 45 days cutting intervals when compared with the root harvest of 4.3% dry matter (Khang et al., 2005). Hiep et al. (2008) also documented the differences in the yield and chemical compositions of leaves of tropical kudzu grass (Pueraria phaseoloides). The study showed a decrease in the crude protein content and increasing dry matter and acid detergent fibre (ADF) in the leaves as the cutting interval progressed. However, there is dearth of information on the proximate composition at the different cutting times of the year, particular at young and maturity stages for T. diversifolia. This study therefore investigated the different compositions at this various times.

T. diversifolia leaves were harvested within the Ekiti State University, Ado-Ekiti, Nigeria. It is located on longitude 7° 40Ë¡  North and latitude 5° 15Ë¡ East of the Greenwich Meridian in the rainforest zone with average rainfall of 1500 mm, ambient temperature between  22 and 38°C and relative humidity of 70%. The leaves of the plant were harvested in May (at the onset of growth of the leaves after the dry spell) and September (before the flowering stage) which are the two significant periods in the year that could influence the nutrient composition of the leaves of the plant. The leaves were chopped and sun dried to a crispy touch, milled in a commercial feed milling machine (Artec Model 20) to T. diversifolia leaf meal (TDLM). The dried samples were stored in transparent polythene bags and kept in the feed store house.

About 2 g of the dried T. diversifolia leaf meal (TDLM) of the two different cuttings (that is, May and September) were analyzed for proximate composition. The dry matter (DM) was determined by drying in a Gallenkamp draught oven at 105°C for 24 h to a constant weight. The crude protein (CP) of each of the samples was determined by Kjedahl method, ether extract (EE) by using petroleum  ether  with  a  boiling point  range  of  40   to   60°C   for extraction in a Soxhlet apparatus for 6 h, all  as described by  AOAC (2005). The crude fibre (CF) was analyzed using the method of van Soest and Rorbertson (1985). The ash was determined by burning the defatted sample in a muffle furnace at 600°C and percent ash of the TDLM calculated. Nitrogen free extract (NFE) was obtained by difference while the metabolisable energy (ME) was calculated using prediction equation of Pauzenga (1985), that is, ME = 35 × %CP + 81.8 × %EE + 35.5 × %NFE.

Dried 2 g samples of TDLM was hydrolyzed at 150°C for about 90 min and the solution used for the determination by the modification of waters 'pictotag system' (Bidlingmeyer et al., 1984; Gardner et al., 1991). The amino acid score was calculated as shown according to Crampton and Harris (1969) and WHO (1973).

The tannin in the two samples were quantified by macerating 200 g of each of the TDLMs in 10 cm³ Folin Ciocalteu reagent (sigma) and 2.5 cm³ NaCO3 (Sodium carbonate). The absorbent of the solution was measured at 725 nm after 40 min using the method of Makkar and Goodchild (1976). Tannin equivalent was calculated from the standard curve.

Phytin contents were determined using 8 g of each of the samples of TDLM soaked in 200 cm³ of 2% HCl and allowed to stand for 3 h. The extract of each of the samples was filtered through a double layer filter paper, 50 cm³ of the duplicate samples of each of the filtrates were pipette into 400 cm³ beakers. 10 cm³ of 0.3% NH4SCN (Ammonium thiocyanate) was used as an indicator and 107 cm³ of distilled water to obtain acidity of pH 4.5. Ferrous chloride (FeCl2) solution containing 0.00195 g/cm³ of Fe2+ was then titrated against each of the solutions of the test samples until brownish yellow colouration persisted for 5 min. Phytin content was calculated by multiplying the titre value with a factor of 3.55 as described by Young and Greaves (1940). The oxalate contents were also analyzed as described by Huang and Tanudjaja (1992).

All the data collected except the amino acid composition were analyzed for mean values, standard deviation, coefficient of variation and t-test using the General linear model computer package as described by SAS (1987).

The amino acids in May and September are shown in Table 3. There were no significant differences (P>0.05%) in the values of amino acids and chemical scores. Generally, the order of ranking of the amino acids in TDLM for May and September cuttings is glutamic acidËƒleucineËƒaspartic acidËƒ alanineËƒ arginineËƒ lysineËƒisdeucineËƒ phenylanineËƒ prolineËƒ glycineËƒ serineËƒ tyrosineËƒthreonineËƒhistidineËƒmethionine. Methionine had the lowest score of 30 in both cuttings. 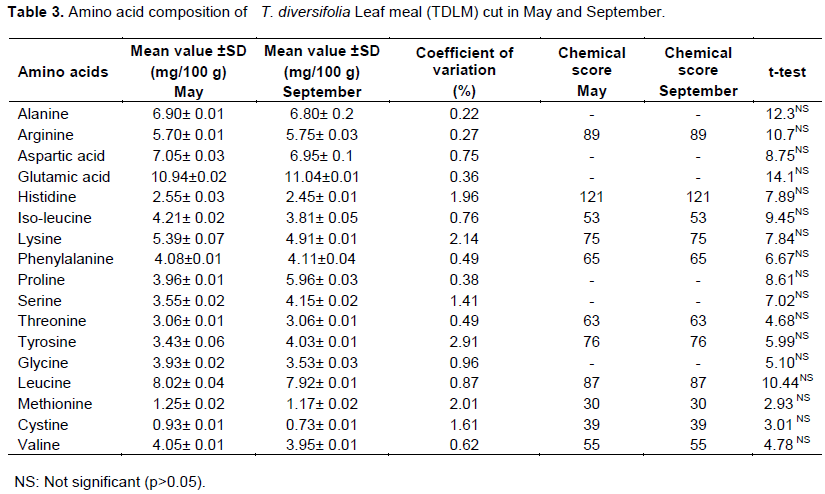 CP, CF and ash of T. diversifolia as shown in Table 1, showed significant increase in the September cutting. This indicated that these nutrients increased correspondingly as the plant aged. The result is comparable with reports of previous workers on other leaf meals such as those of gliricidia, cassava and amaranthus that were adjudged to be good source of protein in broiler or monogastric diets (Agbede and Aletor, 2003; Fasuyi et al., 2008). It also agrees with the findings of Kitaba (2003) and Bayble et al. (2007) that noted higher crude protein yield as Napier grass increases in age. The observed increase in the proximate values of the September cuttings may not be unconnected with the fertility of the soil which could be influenced by the pH, organic matter content and the soil type (Muya et al., 2011).

The presence of ANFs in TDLM agreed with the result of other workers (Fasuyi et al., 2010; Ekeocha, 2012). However, the ANFs  content  appeared  to  be  within  the  tolerable dietary level for monogastric animals as the data obtained in this study were within the range 0.36 to 0.38 mg/100 g for tannin, 1.5 to 2.93 mg/100 g for oxalate (Dairo, 2008; Fasuyi and Ibitayo, 2011). In addition, TDLM has been investigated as components of diets in poultry, swine and ruminant to give reasonable results (Odunsi et al., 1996; Farinu et al., 1999; Togun et al., 2006; Fasuyi and Ibitayo, 2011; Ekeocha,  2012). TDLM as shown in Table 3, has high content of amino acids notably glutamic acid (10.94+0.1 g/100 g) which is similar to the findings of Fasuyi and Ibitayo (2011). The order of occurrence of amino acid in TDLM has been noted under the aforementioned result. The limiting amino acid is methionine for both cuttings as indicated by the chemical score of 30. This shows that TDLM must be supplemented with good quality animal protein and/or vegetable sources if it must be used as vegetable protein source farm animal feeds. TDLM is analyzed to contain reasonable content of lysine which has been reportedly required in breast muscle development for a good carcass cut and general body growth in broiler chicken (Tang et al., 2007). The low values of some of the essential amino acids; however, could be improved upon through processing to make TDLM a veritable vegetable protein source in farm animal feeding.

T. diversifolia leaf meal has been reportedly investigated as component of animal feeds. The nutrient compositions at the start of foliation at about May were lower than for the month of September even though the crude fibre was higher. T. diversifolia cut in September could be a good vegetable protein source and if adequately supplemented with methionine, it could be effectively used in animal feeding.