Barley (Hordeum vulgare L.) is the fourth most important cereal crop in terms of worldwide grain production (FAOSTAT, 2017). The developing countries contribute to more than half of land area planted with barley crops. Moreover, barley is a multiple-purpose crop with high economic and social importance. It is grown to produce grain for human and straw for  livestock consumption and malt for brewing  (Kaso and Guben, 2015). However, growing barley is associated with a production of large quantities of straw which is used extensively as ruminant feed specially in developing countries during dry seasons.

Exploiting differences in feed traits of barley types could provide novel breeding targets for new barley varieties with potentially higher food and livestock feed value that would be particularly useful in a range of diverse environments in mixed crop-livestock systems. Thus, the current study aimed to identify superior cultivars in terms of grain yield, straw yield and food-feed potential (dual-purpose use) for mixed farming systems in Ethiopian highlands.

The  study was  conducted  at  Kulumsa  Agricultural  Research  Center,  Bekoji and  Kofele experimental sites. The agro- ecological  description of the experimental sites is presented in Table 1. The experiment comprised of twenty food and twenty malt improved cultivars drawn from National Variety traits (NVT) of the Ethiopian Barley improvement program. The cultivars were planted using randomized complete block design with three replications during the main cropping season (June to November) under rain-fed condition, with a plot size of 2.5 m × 1.2 m. Spacing between plots and blocks was 0.5 m and 1 m, respectively. All plots were equally managed as per recommended agronomic practices for barley growing in Ethiopia, Fertilizer was applied at a rate of 50/100 kg/ha urea /DAP respectively.

At physiological maturity (maturity date varied from 121 days early matured  to 154 days late matured) all above ground biomass of each plot was harvested and air-dried for two weeks to constant moisture. Plots were manually harvested over 4 middle rows of each plot and the total biomass yield was taken, then threshed. Straw yield of each plot was calculated by subtracting grain yield from total biomass  yield.  Representative  samples  from  each  plot were taken and ground to pass through a 1 mm sieve, then stored for feed nutritional analysis.

All grain and straw samples were analysed for crude protein (CP), neutral detergent fibre (NDF), metabolizable energy (ME) and in vitro organic matter digestibility (IVOMD)  using a combination of wet chemistry analyses and Near Infrared Reflectance Spectroscopy (NIRS); Instrument FOSS 5000 Forage Analyzer with WINISI II software package in the 1108-2492 nm spectra range). A good-of-fitness barley NIRS equation (Wamatu et al., 2019) was used for the prediction of dry matter (DM), nitrogen, neutral detergent fiber (NDF) and in vitro digestibility (IVOMD). Validation of the NIRS equation was undertaken by analyzing 20% of representative samples using conventional wet chemistry. Crude protein was determined according to AOAC (1990). The neutral detergent fiber (NDF) was determined according to Van Soest and Robertson (1985), IVOMD was determined according to Tilley and Terry (1963) and the metabolizable energy (ME) was  estimated from digestible energy and IVOMD using regression and summation equations developed by NRS (2001).

A general linear model was used to test the effect of cultivar on grain yield, straw yield and potential utility index (PUI). PUI, which estimates the proportion of utilizable portion of total barley biomass for food and feed was calculated according to the following equations.

HI, Harvest Index (W/W), Grain yield (GY) (t/ha), Straw yield (SY) (t/ha). Data of the study was subjected to the analysis of variance according to the following model: 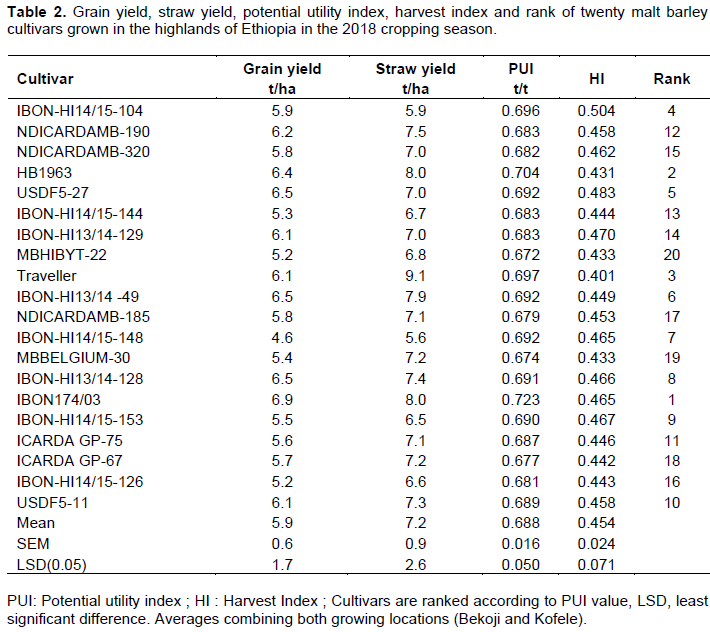 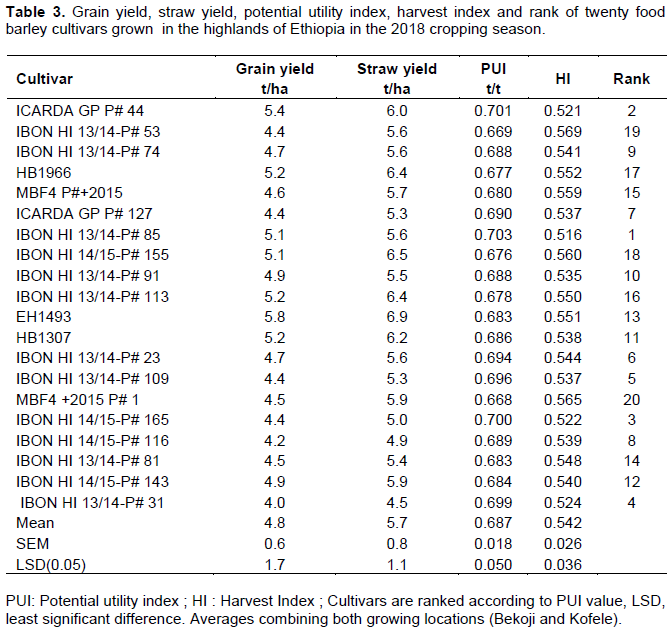 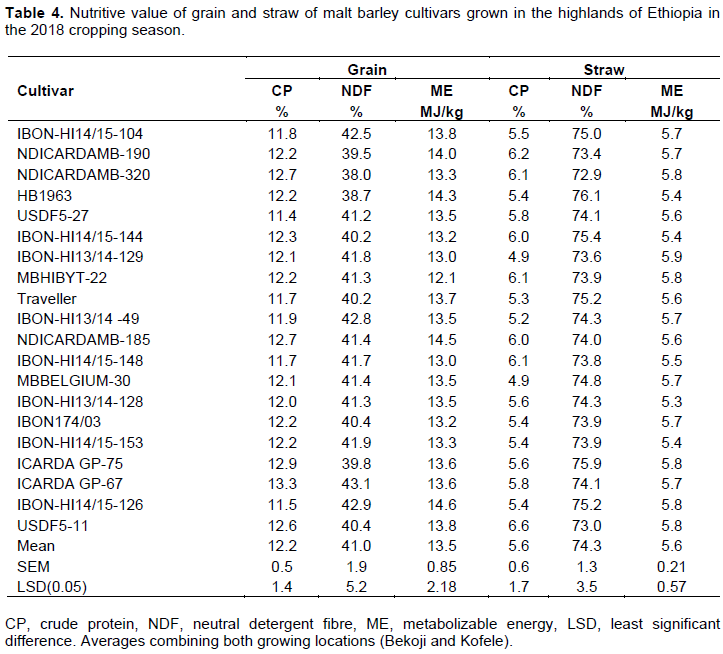 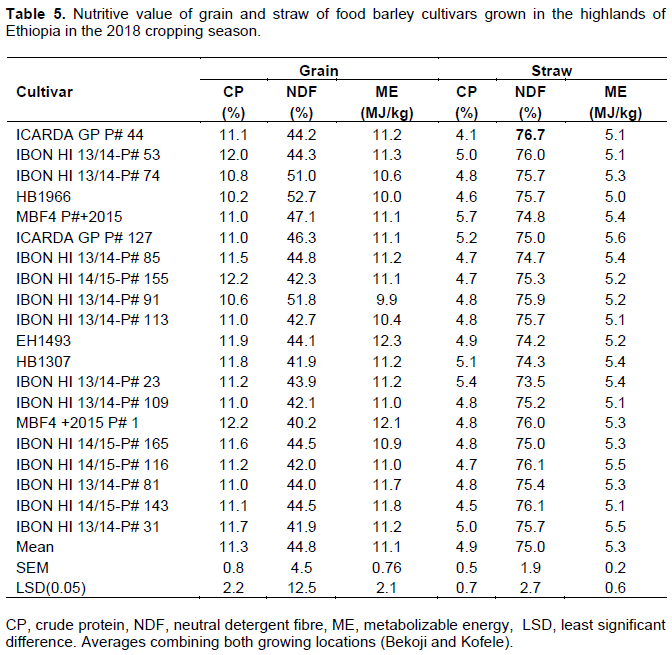 Also for straw, large variation in nutritive value was found across cultivars for food and malt barley cultivar: straw CP: 4.1-5.7% and 4.9-6.2%, straw NDF: 73.5-76.7% and 72.9-76.1%, straw ME: 5-5.6 MJ/kg and 5.3-5.8 MJ/kg (Table 4 for malt type barley and Table 5 for food type barley). Multiple differences were found between cultivars, but with a significant cultivar-location interaction, meaning that the growing location had an impact on the performance of the cultivars and their concomitant PUI ranking. The overall grain quality in Kofele was superior to that in Bekoji. The difference between low and high yielding cultivars was presented in Table 6 (Food barley) and Table 7 (Malt barley ). 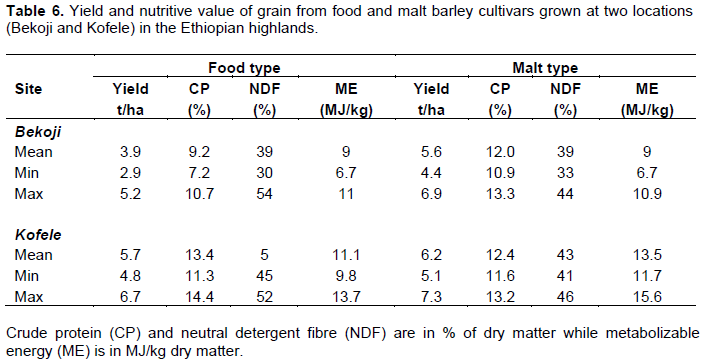 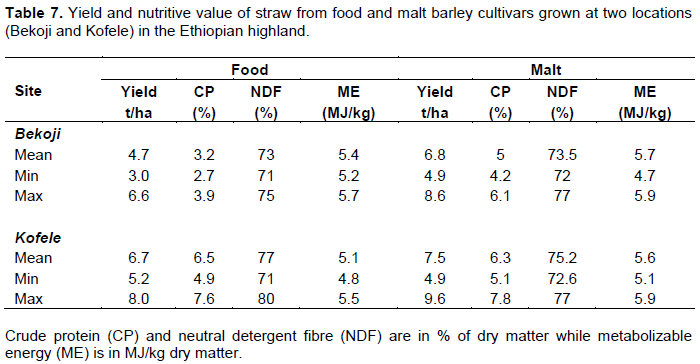 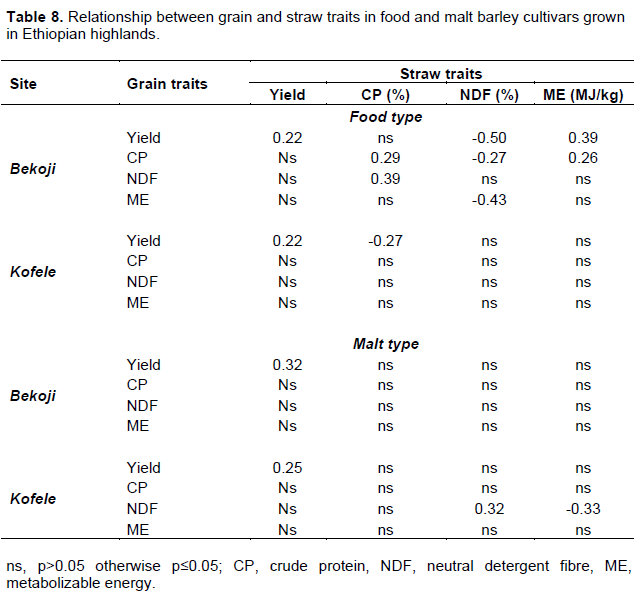 Exploiting differences in feed traits of barley types could provide novel breeding targets for new barley varieties with potentially higher food and livestock feed value that would be particularly useful in a range of diverse environments in mixed crop-livestock systems. These genotypes would promote sustainable use of resources in the farming systems by increasing biomass production for human and livestock production.

Cultivar improvement of straw traits along with grain traits requires information on the cultivar-environment interactions between grain and straw traits and the relationship between these traits across different environments. The current study showed that cultivar variation in yield and quality traits depends on location. That means that the selection of an optimal barley cultivar should be based on location. Further research is therefore warranted to identify the parameters (e.g., soil type, precipitation and slope) that could predict the location effect on barley performance.

Cultivar performance depended on growing location as shown previously in for instance chickpea (Alkhtib et al., 2018; Wosene et al., 2015) and maize (Ertiro et al., 2013). It implies that other cultivars may be selected when tested at another location.

Genotype-environment interaction is known to account for the variation in nutritive value of cereal straw (Seyoum et al., 2020)  (Birhanu et al., 2020) also identified IBON 174/03 as a high grain yielder although only grain quality and not straw quality was evaluated in that study. Our study evaluated both grain and straw quality and added HB1963 and Traveller in addition to IBON 174/03. Large variation in food and malt barley cultivars has been demonstrated in several studies (Pearce et al., 1988; Reed and Yilma, 1986; Wamatu et al., 2019). Our study walks the same trail but also adds the insight that not only grain quality but also straw quality showed an interesting range for selection. A factor that complicates easy selection of superior cultivars is the impact of growing location observed in both barley types. Tsige et al. (2020) already identified this effect but our study clarifies that some traits are more sensitive to changes in growing conditions than others. For instance, there was a huge difference between locations in ME compared to other traits. The ME at the Kofole site was higher than the ME in Bekoji which may originate from the high rainfall in Kofele compared to Bekoji. High rainfall was correlated to high ME in straw (Acone and Wootton, 1999). It was not the purpose to compare malt barley with food  barley,  but malt barley outperformed food barley in both yield and nutritive value. This difference was expected  because  of the basic difference between malt and food barley types. The higher grain and straw yield observed in malt barley type might be related to the high germination rate as a criterion  for  malt  barley  (Macleod,  2013). At  least,  our study points the necessity to consider the impact of location when selecting parental varieties (or potential food-fodder genotypes) of food and malt barley for breeding programs. This  is  especially  the case for food-feed use of barley, since features of grains and straw were clearly affected by location with different effect sizes, meaning that the overall value of food-feed barley may vary more widely than just grain yield.

Considering the environmental impact on the cultivar performance, three superior varieties were identified, that is, IBON174/03 (as grain yielder), HB1963 (as grain and straw yielder) and Traveller (as straw yielder). To evaluate how well the straw of these cultivars suits animal nutrition, a trial with regional livestock is required to evaluate the digestive and metabolic responses to the identified promising barley cultivars.