Maize (Zea mays) is a major staple crop in North-Western Ethiopia. Narrow leaf lupine (Lupinus angustifolius) grain is a commercial concentrates for livestock feed. Maize-lupine intercropping is a sustainable and emerging crop production approach for the resource poor smallholder farmers of North-Western Ethiopia; however, there is no recommended fertilizer rate for the intercrop. Therefore, field experiment was undertaken to determine maize-lupine intercrop yield response to applied N and P; to determine N use efficiency of maize; and to establish the basis for determining the most economical N and P rates with varying costs and commodity prices for the intercrop. The experiment was conducted at South Achefer and Mecha areas of North-Western Ethiopia in 2013 crop season. Four levels of each N (0, 64, 128 and 192 kg N ha-1) and P (0, 20, 40 and 60 kg P ha-1) were arranged in factorial combination. Sole crop maize and lupine were included as check treatments. The treatments were laid out in a randomized complete block design with three replications. The results indicated that maize growth parameters and yield components, maize grain yield, and total maize-lupine intercrop yield increased significantly with applied N, P, and N x P interactions. The highest total intercrop yields were obtained on 162/45 kg N/P ha-1 at South Achefer and 205/61 kg N/P ha-1 at Mecha with yield advantage of 4.14 and 7.05 t ha-1 over unfertilized, respectively.  The economic optimum rates for maize-narrow leaf lupine intercrop were 130/39 kg N/P ha-1 at South Achefer and 177/53 kg N/P ha-1 at Mecha with cost price ratio of N cost kg-1/maize grain price kg-1 equal to 6 and P cost kg-1/maize grain price kg-1 equal to 11. The economic optimum rates decreased as cost price ratio increased, therefore, seasonal price information is vital to adjust the economic optimum rates. Maize N use efficiency declined as N rates increased in the maize-lupine intercrop.

In Ethiopia, maize ranks second next to tef (Eragrostis tef L) in area coverage and first in quantity of grain produced (CSA, 2015). Mean maize yield, however, is very low (3.43 t ha-1) (CSA, 2015) as compared to  a  global  mean of 5.0 t ha-1 (CIMMYT and IITA, 2011). It is a priority staple food crop in many parts of the country. Narrow leaf lupine is of a recent introduction to Ethiopia and is commercial  concentrate  feeds  for   livestock   in   North-Western Ethiopia (Likawent et al., 2012). The grain is an alternative to dry bean (Phaseolus vulgaris) and soya bean (Glycine max) for human consumption, and several modern cultivars have been developed for use as human food (Shahidul et al., 2011).

Maize-legume intercropping systems offer several advantages to small-scale maize farmers such as improved soil fertility, healthier diets, increased productivity, and reduced risk of total crop failure (CCRP, 2009). Seran and Brintha (2010) reported legume intercropping with maize as a way to grow a staple crop while benefiting from the additional crop. Higher productivity of the system as a whole in maize-common bean intercrop compared with maize sole crop has been reported for other parts of Ethiopia (Wortmann et al., 1996; Tamado and Eshetu, 2000).

Nitrogen (N) and phosphorus (P) are important constraints to maize production in Ethiopia (Kebede et al., 1993). Tilahun et al. (2007) recommended application of 128 kg N and 40 kg P ha-1 to maximize net returns to fertilizer use with sole crop maize in Dera area of North-Western Ethiopia. However, information is scarce on fertility response of maize-legume intercrop in North-Western Ethiopia. Narrow leaf lupine, hereafter referred to as lupine, is a relatively new crop with grain and forage potential in the region and more information is needed on intercropping it with maize. Optimum nutrient application rates and efficiency for maize-lupine intercrop is required to increase crop yields and profitability while minimizing environmental pollution. Therefore, this study was conducted to: 1) determine maize-lupine intercrop yield response to applied N and P; 2) determine N use efficiency of maize; and 3) establish the basis for determining the most economical N and P rates with varying costs and commodity prices for the intercrop.

Treatments consisted of N (0, 64, 128 and 192 kg N ha-1) and P (0, 20, 40 and 60 kg P ha-1) arranged in factorial arrangement. Sole crop maize at spacing of 75 cm x 30 cm with recommended fertilizer rate of 128/40 N/P kg ha-1 and sole crop lupine at spacing of 40 cm x  10 cm  with  no  fertilizer  application  were  included  as check treatments. The treatments were laid out in randomized complete block design with three replications. The fertilizer urea (46% N), DAP (18% N and 20% P) and triple super phosphate (TSP) (20% P) were used as sources of N and P.  The fertilizers were applied as band application in the maize furrow. All P was applied at planting while one-third of the N was applied at planting and the remaining N was side-dress applied, and covered, at the 8- to 10-leaf stage of maize. The crop varieties used for the experiment were BH-540 for maize and Sanabor for narrow leaf lupine. Both crops were planted in June at the same date in an additive series with 100% of maize plant population, and with lupine planted at 40% of sole crop stands. Maize was planted in paired rows spaced at 50 and 112.5 cm within and between paired rows, respectively. Paired rows of lupine were planted between the paired maize rows with 37.5 cm apart from adjacent maize row and within paired rows lupine (Figure 1). Intra row spacing was 30 and 10 cm for maize and lupine, respectively. Maize leaf area index (LAI) was recorded at silking stage (Dwyer and Stewart, 1986). Plant height, above ground dry biomass yield, ears plant-1, kernels ear-1 were determined in middle 4 rows of 1.8m length which was the net plot for determination of grain yield of both crops. 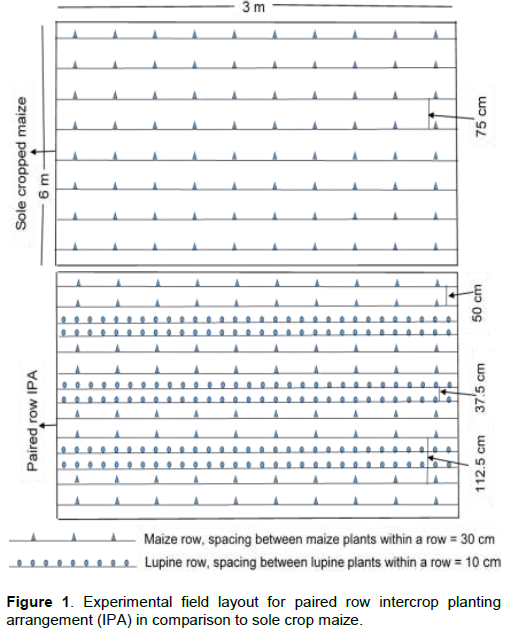 Components of N use efficiencies of maize were calculated as described by Cassman et al. (2002).

Total intercrop yield (measured as equivalent yield of maize, EYM) was calculated as

Growth and yield components of maize such as LAI, plant height, biomass yield, ear plant-1, kernel ear-1, and TKW were significantly affected by N and P application at both sites. Interaction effect of N and P significantly affected plant height at South Achefer, and LAI, plant height, biomass yield and number of kernels ear-1 at Mecha. Maize LAI and plant height increased as N and P rates increased (Tables 3 and 4). The highest LAI and plant height were recorded on the application of 192/60 N/P kg ha-1 at both sites (Table 4). Increases in maize plant height and LAI in response to N and P was reported by Onasanya et al. (2009). The effect of N fertilization in enhancing LAI is well documented in maize because of higher photo assimilates that result in more dry matter accumulation (Uhart and Andrade, 1995). 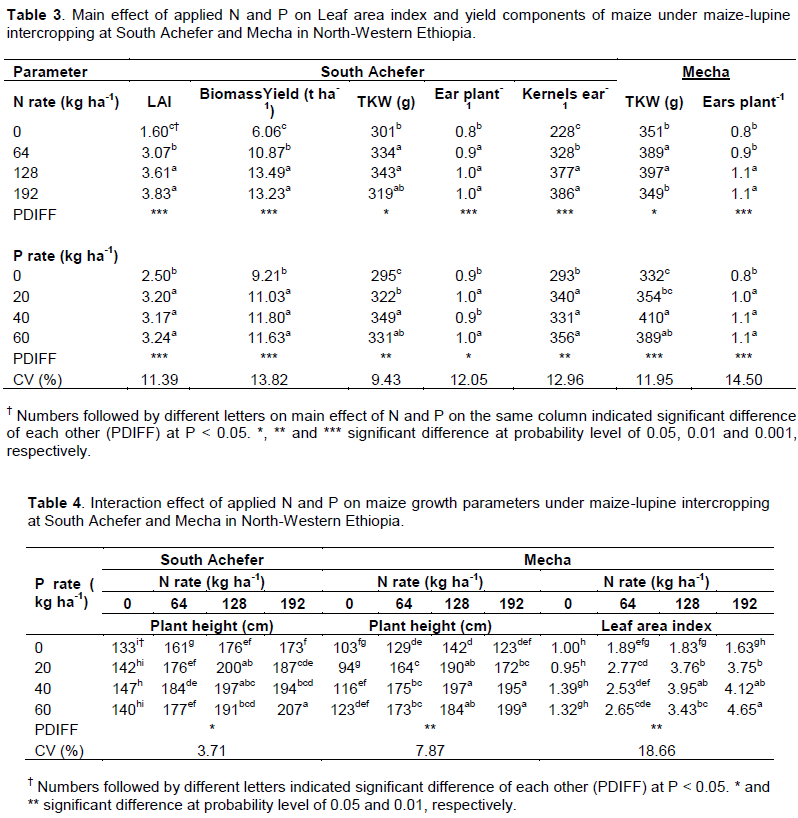 Biomass yield, TKW, number of kernels ear-1 and ears plant-1 were also increased in response to N and P applied (Table 5). The increase in biomass yield and TKW with N applications was consistent with the findings of Kaleem et al. (2012) who reported significant increase in biomass yield and TKW with increasing N rates as high as 210 kg N ha-1. The response of TKW to N and P rate is due to the fact that N and P deficiency decrease biomass production and partitioning, especially in reproductive organs, resulting in small kernel size (Uhart and Andrade, 1995). The increase in kernels ear-1 with N application was also consistent with those of Ali and Raouf (2012) who reported highest maize kernels ear-1 at the highest N rate of 225 kg N ha-1. The highest biomass yield (17.07 t ha-1) at Mecha was obtained at the highest fertilizer rates of 192/60 N/P kg ha-1 (Table 5). 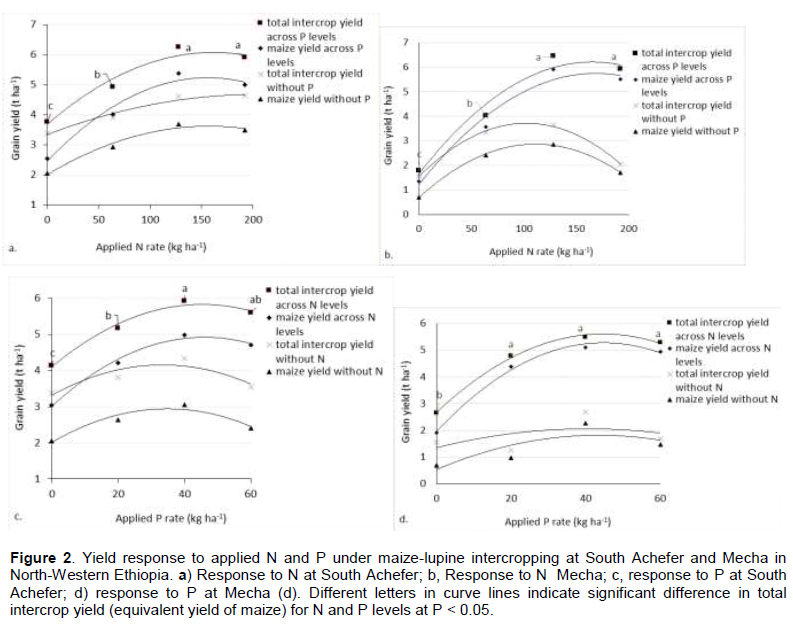 The total intercrop yield (equivalent yield of maize) response functions for N and P applications were:

The increased maize yield in both sites with N and P application has commonly occurred with maize (Ardell and Michael, 2014; Sun et al., 2014). The polynomial response for the highest N and P rates may suggest levels below the highest rates plus the residual nutrients in the soil is sufficient to sustain normal vegetative growth of maize.  Depression in grain yield at higher levels of N and P might be also due to nutrient imbalances. Komljenovic et al. (2010) reported significant reduction of zinc status in the maize leaf at higher level of P application. Depression in grain yield of maize at higher N supply was reported (Sun et al., 2014).

The N x P interaction was very important to maize-lupine intercrop yield. Dramatically, yield increased at the lower rates of each nutrient in the presence of the other one (Figure 2) demonstrated the two nutrients are equally important and yield limiting for maize at these sites. Yield responses to N without P application (Figure 2a, b) and to P without N application (Figure 2c, d) were low. This result is in agreement with those of Alzubaidi et al. (1990) who reported significant grain yield response of maize for the interaction effect of N and P compared to application of N and P alone. Masaka (2006) further indicated that this was partly attributed to better plant growth by which N-fertilized plants have larger root systems for the capture of  other nutrients. However, the N x P interaction is likely to be much less important in cases where N is much more limiting than P deficiency (Dobermann et al., 2011; Kaizzi et al., 2012).

From response of N, P, and the N x P, polynomial response function for the intercrop yields were generated for each of the site.

Agronomic optimum N rate (AONR) and P rate (AOPR) at South Achefer were calculated from the following equations which were generated from Equation 1.

Similarly, AONR and AOPR at Mecha were calculated from the following two simultaneous equations which were generated from Equation 2.

Similarly, EONR and EOPR at Mecha were calculated from simultaneous equations which were generated from Equation 2. 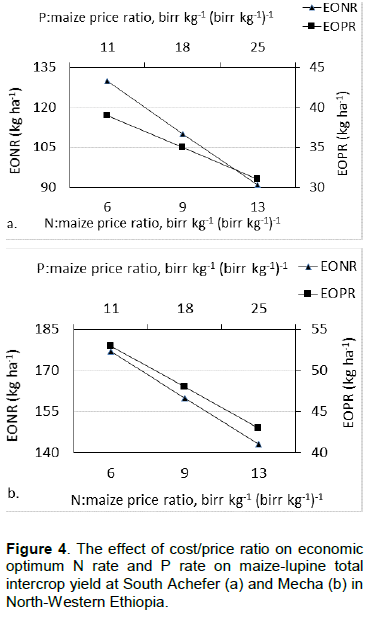 Accordingly, the maximum economic net return that can be estimated from maize-lupine intercrop on the above economic optimum rates are 24123, 21110 and 18512 Birr ha-1 at South Achefer, and  28338, 24121 and 20314 Birr ha-1 at Mecha, respectively. Net return decreased by 23 and 28% at South Achefer and Mecha, respectively, as cost price ratio of N/maize grain and P/maize grain increased from 6 and 11 to 13 and 25. Fertilizer costs and grain prices can fluctuate across years, therefore, profitability of fertilizer use is highly variable. Variations in the profitability of fertilizer use due to variable cost price ratios require that farmers adjust the EONR and EOPR based on current information. 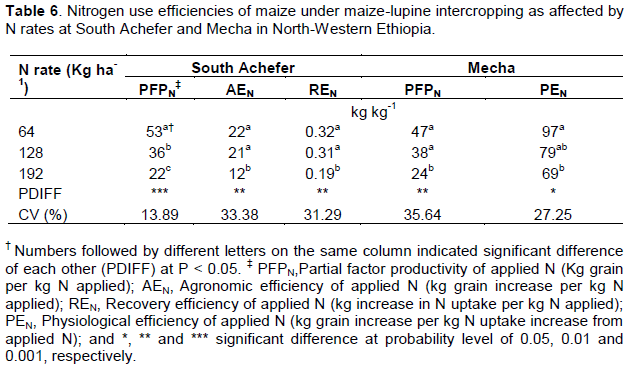 Maize-lupine intercrop responded to N and P application in North-Western Ethiopia with yield increase of 4.14 t ha-1 at South Achefer and 7.05 t ha-1 at Mecha over unfertilized. Economic optimum rates decreased from 130/39 to 91/31 N/P kg ha-1 at South Achefer and from 177/53 to 143/43 kg N/P ha-1 at Mecha as cost price ratios of N cost kg-1/maize grain price kg-1 increased from 6 to 13 and P cost kg-1/maize grain price kg-1 increased from 11 to 25. Therefore, seasonal price information is vital to adjust the economic optimum rates. Nitrogen use efficiencies of maize decreased as high as 58% in maize-lupine intercropping when N applied increased from 64 to 192 kg N ha-1. Further studies need to be conducted over seasons and locations to verify the results.

Financial assistance for the field research and laboratory work was provided by SIMLESA (Sustainable intensification of maize-legume cropping systems for food security in eastern and southern Africa). A Borlaug LEAP Fellowship sponsored the travel to the University of Nebraska-Lincoln, USA for the data analysis and advisory support. The Amhara Agricultural Research Institute, specifically Adet Agricultural Research Center, facilitated the research work.