The unknown potential of the mangaba Hancornia speciosa naturally occurring areas in the mid-north region of Brazil has raised the risk of its extinction and contributed to its underutilization. The objective of this study was to characterize the vegetation structure with naturally occurring mangaba in Recanto, Patizal and Recurso, villages in Morros municipality, State of Maranhão to provide the species proper utilization and conservation. The floristic composition was determined by the quadrants method. Two individuals were selected per quadrant, an adult and regenerating. The phytosociological parameters computed were Relative Density, Frequency and Dominance, Importance Value, Cover Value, the Shannon and Weaver Diversity Index and the Sorensen Similarity Index. The species H. speciosa reached relevant position in all computed parameters in the three sampled villages with importance values varying from 25.15 to 29.38% for the regenerating and from 29 to 56.64% for the adult strata, indicating the species relative ecological importance.

The Brazilian natural heritage is relevant for the global biodiversity conservation due to its territorial extension, diversity and endemism of species, genetic heritage and the ecosystem heterogeneity of its biomes (Maracahipes et al., 2011). However, the floristic richness of Brazil is constantly threatened, either by land speculation, deforestation or the predatory exploitation of natural resources.
According to notice of the Ministry of the Environment (2012) the Brazilian Savannah is considered the richest in the world, with 11,627 native plant species already catalogued. However, it has suffered significant loss of
habitat and many native species with great socio-economic and environmental importance, as is the case of mangaba  (Hancornia speciosa Gomes), are at risk of extinction.
The mangaba is an abundant species in the mid-north region of Brazil. It is typical of the Savannah and Restinga (sandbank) environments. The species has broad potential for use and high utility value for both the pharmacological industry including latex, leaves, stem bark and root for very specific purposes; and for the food industry, the fresh consumption of fruit and / or manufacture of juices, jams, pulps, ice cream among others (Lima et al., 2015). Countless families survive as mangaba collectors in the mid-north region of Brazil.
Nevertheless, mangaba production in almost all comes from the extraction collection, and despite their socio-economic importance, studies of the species are limited. This is a species still under domestication phase but with extinction risks, and little is known about its peculiarities in its naturally occurring environment, which is under accelerated devastation process. Therefore, issues related to the development, adaptation and arrangement of species, still need to be investigated further. Based on this approach, this study aimed to characterize vegetation structure of naturally occurring mangaba in the mid-north region of Brazil in order to support the development of a management plan justifying the conservation and proper utilization of the species.

This research was carried at the Settlement Project Rio Pirangi (P. A.) in Morros municipality, in the State of Maranhão, mid-north region of Brazil, from November, 2014 till April 2015. The climate in the region is sub-humid with average temperature ranging from 25 to 27°C, relative humidity is between 78 and 82% and rainfall is approximately 1900-2300 mm year-1 (Nugeo, 2015).
The P. A. great richness is the mangaba tree composition in the villages of Recurso (2° 58’ 42.7” S and 43° 53’ 12.7” W), Recanto (2° 58’ 30.7” S and 43° 49’ 29.0” W) and Patizal (3° 00’ 25.4” S and 43° 54’ 22.9” W) where this study was conducted. In all villages extractive farmers conserve native mangaba trees and neither slash and burn nor cultivate the land, thus they make their living from the sale of the mangaba fresh and/or processed fruits, except in Recanto, where farmers use native mangaba areas for cultivation and   pasture  for  extensive  cattle  farming,  therefore,  the  use  of
mangaba for both the consumption and for marketing fresh and/or processed is minor compared to the other two villages.
Vegetation in the naturally occurring mangaba in the three villages is classified as Savannah-Restinga transition zone (Nugeo, 2015). The soil is classified as Quartzipsamment (Nugeo, 2015). Twenty soil sub-samples were randomly collected per village at 0 to 20 cm, bulked and sent to the Soils Laboratory of the Maranhão State University for performing chemical analysis according the Instituto Agronomico de Campinas methodology (IAC, 2001).
The structure and composition of the adult and natural regeneration strata from vegetation with naturally occurring mangaba was determined by the quadrants method with 20 m spacing between points and 50 m between transects. Four transects were distributed in the sampled vegetation in each village. All transects were georeferenced. Two individuals were sampled per quadrant, one adult with the plant stem diameter at soil level (DSL) of 5 cm or more and one individual from the regeneration community, with DSL of 5 cm or less.  The distance point tree and total plant height were measured with an analogical pachymeter, a measuring tape and a graduated ruler, respectively.
The phytosociological parameters computed were density, frequency and dominance (absolute and relative), importance value, cover value, the Shannon Diversity Index (H') and the Sorensen Similarity Index (ISS), according to Mueller-Dombois and Ellenberg (1974). Data were analyzed by means of the software FITOPAC 2.1.2 (Shepherd, 2009).
One extractivist farmer contributed with the identification of the species common names. Thereafter, collection of the botanical material was made for determination of the species scientific names, plants were pressed to prepare exsiccates and were incorporated into the Rosa Mochel Herbarium of the Maranhão State University in São Luis. The floristic list of families and species was organized according to the Angiosperm Phylogeny Group III guidelines (APG III, 2009).

The soil chemical analysis results indicated that the soil in all villages were strongly acid except in Patizal where it was medium acid. Organic matter, P and K contents were low in all villages but Ca content was medium. The Mg and Al contents were low in all areas except in Recurso where their content was medium. The Al content was high in all soils except in Recurso where it was low Therefore soils in the occurring mangaba areas in this study are characterized by low natural chemical fertility (Table 1).

However, mangaba is not demanding in soil fertility because it grows well in poor and acidic soils which are
major characteristics of the Brazilian savannah soils (Vieira-Neto, 1994). Silva et al. (2011) reported that mangaba emergency percentage, stem diameter and the length of the root system were not significantly affected by different substrates and Oliveira et al. (2014) studying the effect of different culture media on the in vitro germination of mangaba seeds observed that there was no difference in the values of germination average time.
The number of sampled points was determined by the stability of the collector’s curve obtained with 61 points for the regenerating and with 85 points for the adult strata for vegetation assessed in Recanto; 66 and 67 points, respectively, for regenerating and adult strata in Patizal, and finally, with 77 and 61 points for regenerating and adult strata, respectively, in the Recurso village (Figure 1). Eighty eight points were sampled per study area despite field observations have shown that the collector’s curve stabilized with a lower number of points, thus this suggests a broad flora representation in this study. 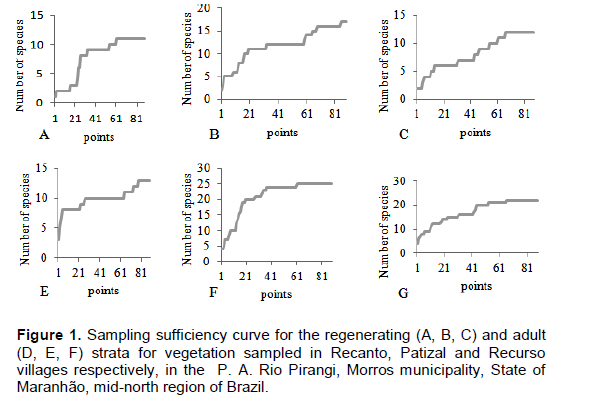 Floristic composition of the adult and regenerating strata in naturally occurring mangaba areas
A total of 264 points distributed in 12 transects were sampled totaling 2,112 live individuals, from these, 1,056 individuals from 33 species and 20 families, were from the regenerating stratum and 1,056 individuals from 22 species and 10 families, were from the adult stratum (Table 2). The number of species and families sampled in both the  regenerating  and  adult  vegetation  strata  was higher in Recanto followed by Patizal and Recurso villages (Figure 2).  The family Apoycnaceae was the most abundant, with the highest number of individuals in both adult and regenerating strata in all villages (Figure 3). The Shannon Diversity Index indicated that the sampled vegetation floristic diversity was higher in Recanto than Patizal and Recurso villages (Table 3). In general, the floristic diversity was higher in the regenerating than in the adult stratum in all villages (Table 3). The Shannon Diversity Index (H’) indicates high species diversity for any type of vegetation when it varies from 3.83 to 5.85 nats. ind.-1 (Knight, 1975). Thus, based on the results obtained in this study, it is possible to infer that both adult and regenerating strata from the naturally occurring mangaba areas in the Savannah-Restinga vegetation transition zone in Morros, State of Maranhão showed low species diversity. In a study on natural species regeneration carried out in the Savannah of the Federal District of Brazil, Medeiros et al. (2007), reported a value of 3.21 nats. ind.-1.
Marmontel et al. (2014) assessing arboreal vegetation in the Savannah in the State of Minas Gerais, Brazil, described H’ value of 2.5 nats. ind.-1. Both reported H’ values were higher than those obtained in this study. This is because mangaba management and the greater awareness of the mangaba food, nutritional and cultural values have resulted in the mangaba conservation in the villages from this study which contributed for the significant increase in the number of mangaba plants occupying the other species niches thus decreasing the overall species diversity 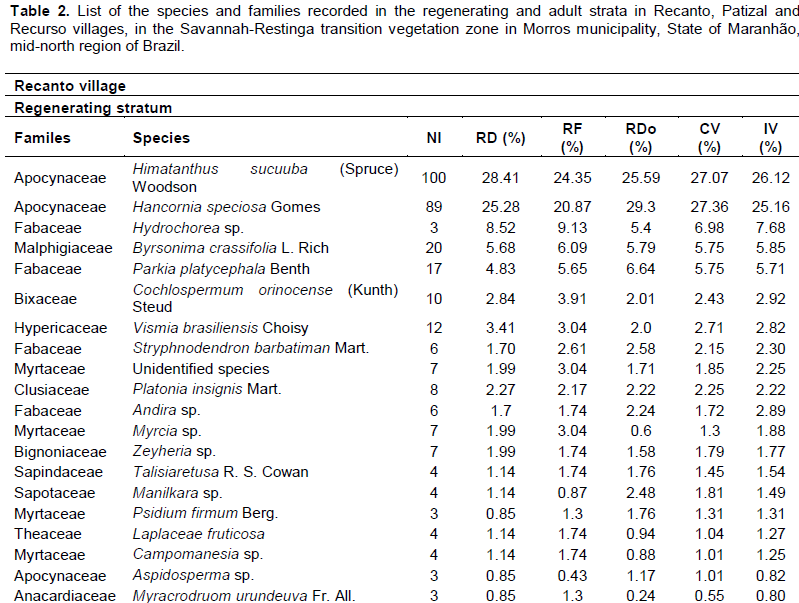 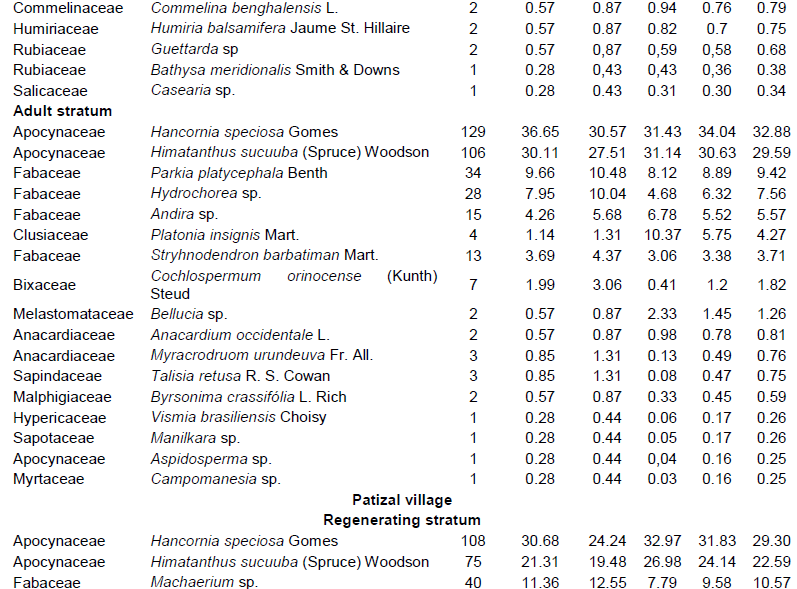 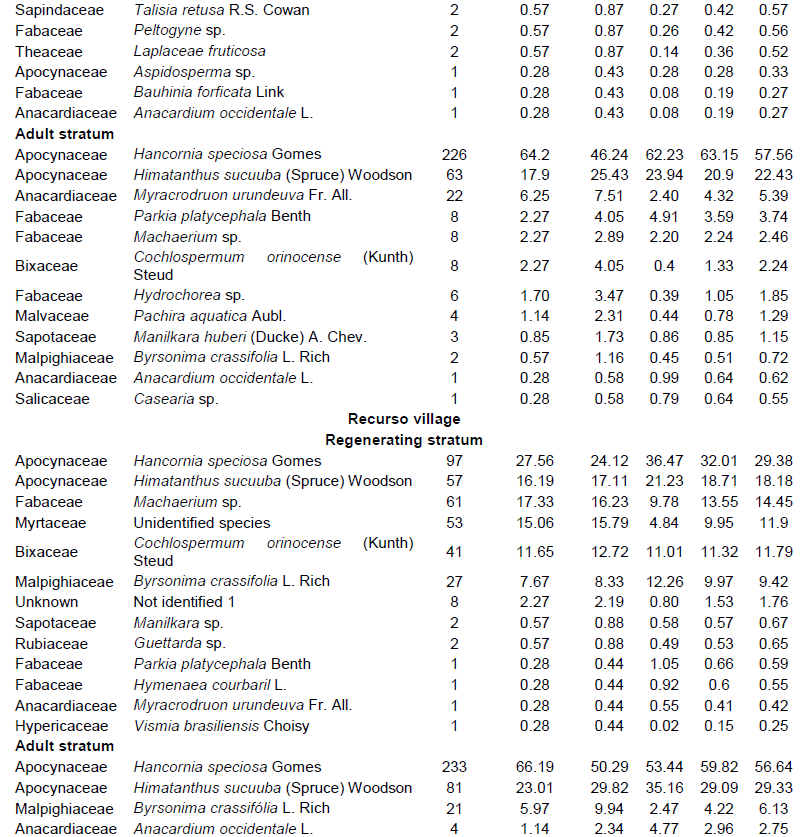 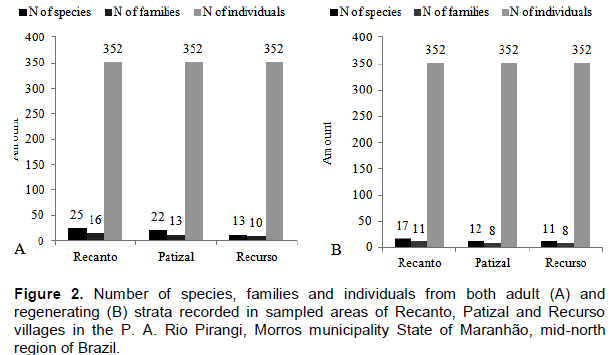 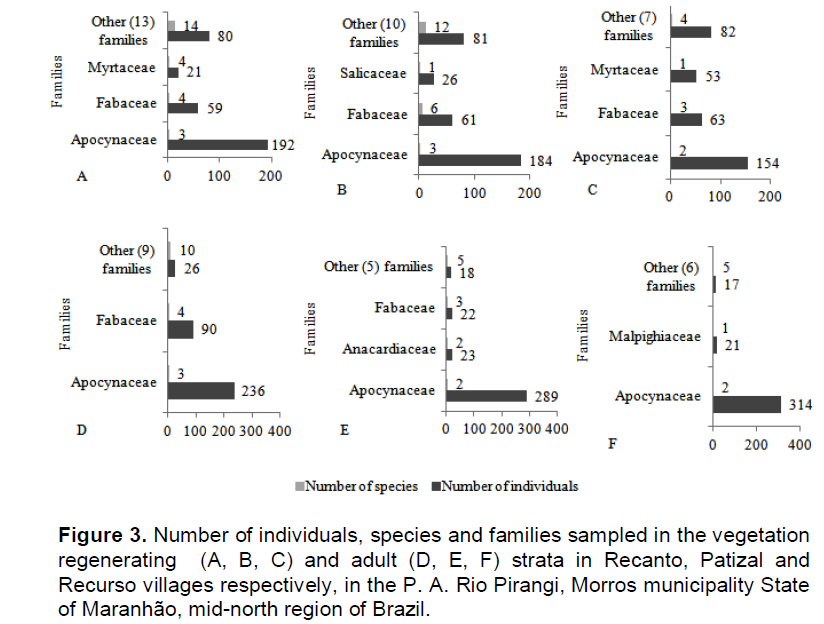 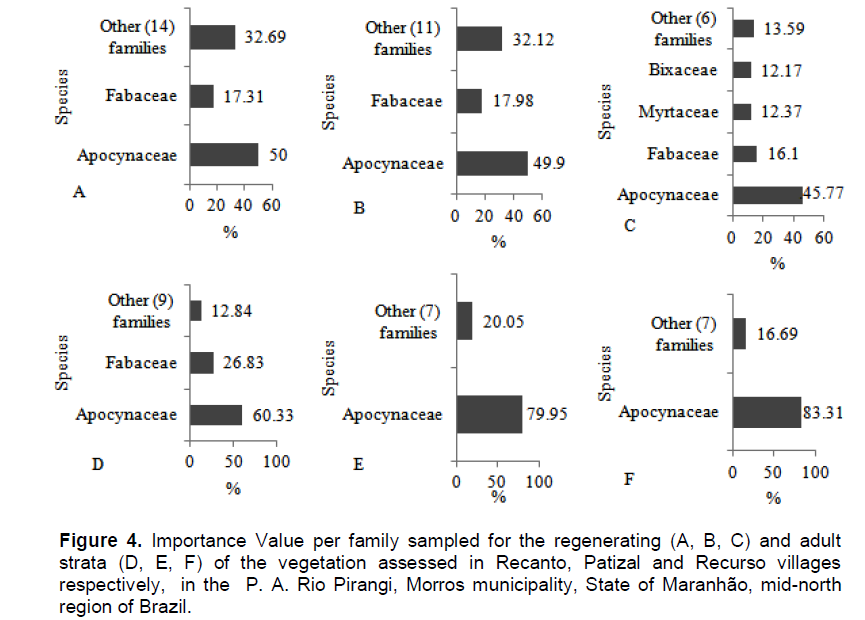 These results are similar to those reported in research carried out by Castro and Conceição (2009) in Savannah vegetation in the Parque of Mirador in the State of Maranhão where the authors noted the same families described in Morros, although the highlights were  for  the families Myrtaceae (IV = 34.54%) and Malpighiaceae (IV = 28.17%).

The more important species for the characterization of the Savannah-Restinga transition vegetation zone sampled in the mid-north of Brazil were H. speciosa and Himatanhus sucuuba, both had the higher importance value for the regenerating and adult strata. The H. speciosa importance value varied from 25.16 to 29.38% for the regenerating and from 32.88 to 57.56% for the adult strata among the vegetation sampled areas of Recanto, Patizal and Recurso villages, suggesting high ecological importance of this species for the sampled ecotone. The vegetation with naturally occurring mangaba showed low species diversity with H’ varying from 1.89 to 2.34 nats.ind.-1 for the regenerating and from 1.09 to 1.77 nats.ind.-1 for the adult strata. The high Sorensen similarity indices among the vegetation strata in Recanto (65%), Patizal (62%) and Recurso (58%) suggest stability of the sampled vegetation in the naturally occurrence areas of mangaba.

The authors would like to thank Maranhão State University, FAPEMA (Foundation for Research and Scientific and Technological Development of Maranhão State, Brazil), coordination for the Improvement of Higher Level Personnel (CAPES, Brazil), Tijupá Agroecological Association and farmers at Recurso, Recanto and Patizal villages from the Settlement Project Rio Pirangi, (P. A.) Morros municipality, State of Maranhão, mid-north region of Brazil, for the support given to carry out this research.