The stage of dormancy is an important physiological condition in the behavior of temperate climate fruit trees, and it is reached at the end of the vegetative cycle, when the leaves are fallen. In general, a cold period is needed to overcome the state of dormancy and promote uniform buds sprouting, being therefore a limiting factor for grape production in Brazil. There are chemicals used in breaking dormancy of the vines, allowing the production. However, there is need to restrict the use of those products in the management of orchards, defending sustainable fruit production systems. For this purpose, alternative products, such as garlic extract, have shown promising results in overcoming dormancy in fruit trees. The objective of this study was to evaluate the effect of different doses of natural garlic extract (NGE) (Allium Sativum L.) and Bioalho® (Natural Rural S.A.) added or not to mineral oil (MO) (2%), in overcoming dormancy of grapevines buds of the cultivar 'Isabel Precoce' (Vitis Labrusca L.), soil and climate conditions of the region of Lavras – Minas Gerais. The results of this study showed that the action of NGE and Bioalho® in breaking dormancy in different intensities, and the treatments with NGE 15% + MO (2%), NGE 20% with and without MO (2%), Bioalho® 15% with and without MO (2%) and Bioalho® 20% with and without MO (2%) had the best results in the induction of the shoots of the vines 'Isabel Precoce'.

The fruit trees of temperate climate have a mechanism of protection that allows their survival in adverse weather conditions, known as dormancy (Campoy et al., 2011). According to Perez and Lira (2005), temperature is the most important environmental variable in the induction processes and overcoming of dormancy of these fruit trees. Low temperatures lead these  plants  to  a  state  of physiological inactivity. A period with accumulation of hours of chilling is necessary to overcome this stage of dormancy and start a new cycle of vegetation, without delay and within uniformity to the shoots. In the case of vines, a leading fruit of temperate climate, this period can vary from 50 to 400 h, with temperature at 7°C, depending on the cultivar (Botelho and Muller, 2007).
In this sense, Hawerroth et al. (2013) claimed that the dormancy is one of the main factors that influence the production of temperate fruit trees. Hence insufficient cold periods cause irregularities on the sprouting and the development of these plants when grown in hot climates (Bonhomme et al., 2005), as found in Brazil. Therefore, the use of chemicals to overcome dormancy is key in order to improve produce in these regions (Botelho and Muller, 2007).
Currently, the hydrogenated cyanamide (H2CN2) has been the most used compound to induce sprouting of temperate fruit trees (Hawerroth et al., 2013), mainly in vines (Botelho and Muller, 2007). However, the H2CN2 is a product considered as toxic, since it has been classified by the Environmental Protection Agency of the United States in the category of highest toxicity (Category I) (Settimi et al., 2005).
Given the aforementioned, there is the need of alternative substances with similar effect of the H2CN2, to be used as dormancy handlers and thus make the production in hot climates more sustainable. Botelho et al. (2010) included the garlic extract as an alternative substance to be employed, which provided good results.
The aim of this study was to evaluate the effect of different doses of natural garlic extract (EAN) and Bioalho® added or not to mineral oil (OM), in overcoming the dormancy of buds of the cultivar 'Isabel Precoce' in the edaphoclimatic conditions of the region of Lavras - MG.

The experiment was conducted in the Orcharding Sector, at the Universidade Federal de Lavras (UFLA), in Lavras, Minas Gerais (21° 14' 06" S, 45° 00' 00" W, and altitude 918 m). The climate of the region according to the classification of Köeppen, modified by Vianello and Alves (1991) is of type Cwb, mild temperate (mesothermal), being the average annual temperature and precipitation of 19.4°C and 1,529 mm, respectively. According to Alvarenga et al. (2002), Lavras has an average annual number of 100 chilling units and only in years with very intense winter, that number could reach 150 h. The vegetative material used in the experiment was the cultivar Isabel Precoce, with 3-year-old grafted on rootstock 'Paulsen 1103', by the method of grafting Omega type. Vines were planted in September, 2010, being conducted in the cordon-spur, with 1.0 m spacing between plants and 3.0 m between rows. Cultural and phytosanitary treatments were performed as recommended by Chalfun et al. (2002) and fertilizing as recommended by Ribeiro et al. (1999).
Fruiting vines pruning was performed in August, 2014, leaving 4 to 6 buds per branch. The treatments were applied on the same day, through direct brush stroke on the dormant buds, until complete wetting. Thirty days after application of the treatments, a count of sprouted buds per plant was held, and therefore, the assessed percentage which sprouted was obtained.
The products used in the treatments were the Bioalho® (extrato de alho, Natural Rural S.A., Araraquara, Brasil) - commercial product obtained by cold extraction of garlic extract through pressing, being totally soluble in water and added adjuvants; hydrogenated cyanamide (H2CN2) (Dormex®, 520 g L-1 H2CN2, Basf S.A, Guaratinguetá, São Paulo) - growth regulator of the group of the carbamidas; mineral oil (OM) (Assist®, 750 ml L-1 mineral oil, Basf S.A., Guaratinguetá, São Paulo) - mixture of paraffinic hydrocarbons, paraffinic and aromatic cycle from saturated and unsaturated petroleum distillation; and natural garlic extract (NGE) – homemade product made with the cultivar 'Chonan Roxo' of the species Allium Sativum L. For its obtainment, the shell was removed followed by the subsequent grinding of the cloves in a domestic blender (Wallita®). After the grinding, the dough was simultaneously pressed and filtered with a household potato masher and a cotton cloth, respectively (Figure 1).
The following treatments were applied: 1) Control (water); 2) NGE 5%; 3) NGE 10%; 4) NGE 15%; 5) NGE 20%; 6) NGE 5% + MO 2%; 7) NGE 10% + MO 2%; 8) NGE 15% + MO 2%; 9) NGE 20% + MO 2%; 10) Bioalho® 5%; 11) Bioalho® 10%; 12) Bioalho® 15%; 13) Bioalho® 20%; 14) Bioalho® 5% + MO 2%; 15) Bioalho® 10% + MO 2%; 16) Bioalho® 15% + MO 2%; 17) Bioalho® 20% + MO 2%; 18) H2CN2 2% and 19) MO 2%. The experimental design was completely randomized, with three replications and experimental plot consisting of a plant. Data were analyzed through analysis of variance (ANOVA) on the statistical program SISVAR version 5.3 (Build 77). Significant comparisons were generated using the Scott-knott test at 5%, and regression analysis. 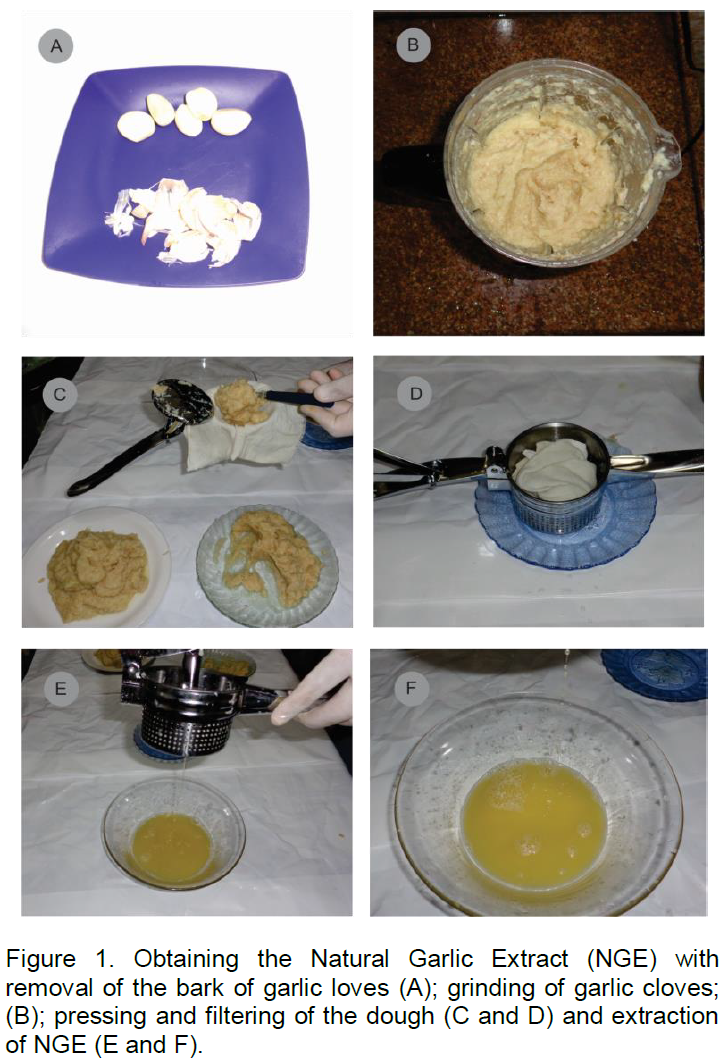 The percentage of breaking buds of the cultivar 'Isabel Precoce' was influenced by the application of dormancy agents in the plants, since the result of analysis of variance was significant. In addition, the effect of the dormancy handlers, in other words, sprouted buds 30 days after the product application varied according to doses applied. Figure 2 presents the average sprouting in relation to each treatment, similar to a correlation between product and percentage of sprouted buds. 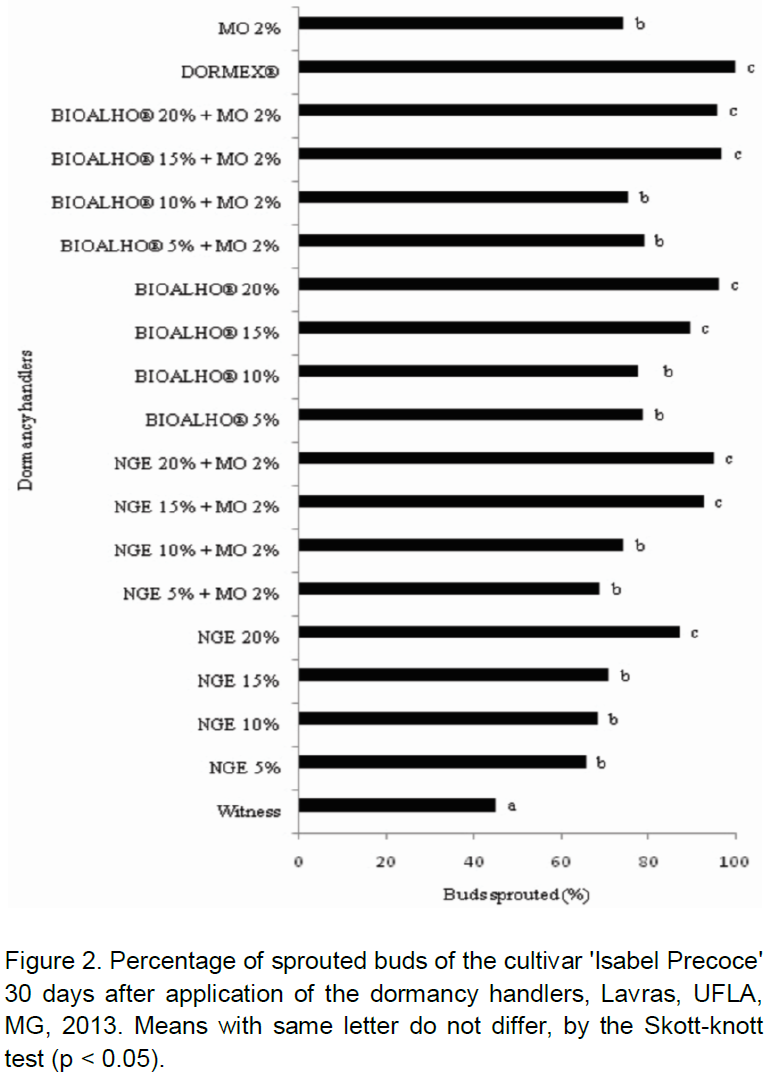 Vines which received the treatments NGE 20%; Bioalho® 15%; NGE 15% + MO 2%; NGE 20% + MO 2%; Bioalho® 20% + MO 2%; Bioalho® 20% and Bioalho® 15% + MO 2% showed, respectively 87, 90, 93, 95, 96, 96 and 97% of sprouted buds, 30 days after their application. These were the treatments which provided greater efficiency in overcoming dormancy of buds in vines, not statistically different from the conventional treatment with H2CN2 (Dormex®), which obtained 100% of buds sprouted.
The treatments with NGE 5%; NGE 10%; NGE 5% + MO 2%; NGE 15%; NGE 10% + MO 2%; MO 2%; Bioalho® 10% + MO 2%; Bioalho® 10%; Bioalho® 5% and Bioalho® 5% + OM 2% showed inferior results to the treatments described previously, but were better than the witness. In that way, some budding improvement occurs with doses less than 15%. Botelho et al. (2009) studied the effect of the application of garlic extract (3%) with and without vegetable oil (1%) on the induction of sprouting on the vine 'Isabel Precoce'. The only treatment that stimulated the sprouting was garlic extract (3%) added to mineral oil, however it was partial and therefore inefficient.
Oliveira et al. (2009) observed that garlic extract had influence on overcoming the dormancy of buds in vines, and the treatment that showed  similar  results  related  to addition of H2CN2 over the anticipation of sprouting was the garlic extract (5%) added to mineral oil (4%). Rady and Seif El-Yazal (2014) identified in their study that the use of garlic extract in order to anticipate sprouted buds increased the yield in apple trees. In addition to these authors, Kubota et al. (2000) and Botelho et al. (2010) also  found  that  garlic extract  had  a  great  potential   in breaking dormancy in grapevines. 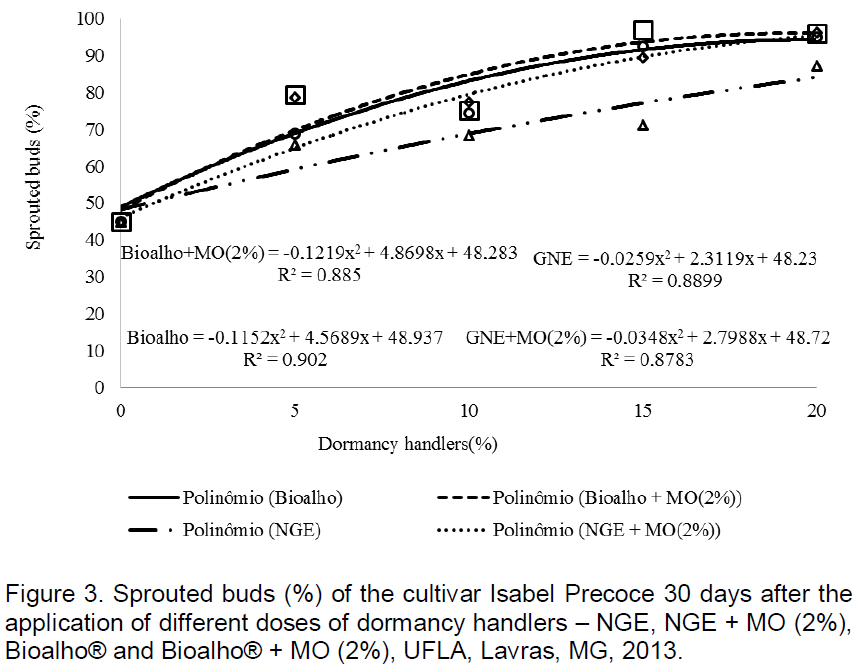 Generally speaking, it turns out that the alternative products EAN (homemade product) and Bioalho® (commercial product) proved to be effective in overcoming dormancy and sprouting induction in 'Isabel Precoce' cutivar. The doses tested in this work that had greater effect on  overcoming  dormancy  for  this  cultivar were the doses greater than or equal to 15% for both products (EAN and Bioalho®). However, in the case of EAN at the dosage of 15%, the addition of mineral oil provided better result. Thus, it is observed that the MO acts as a booster to the NGE effect, since the doses of NGE added to MO showed better results when compared to the doses of NGE without MO treatment. In Figure 3, the percentage of sprouted buds of the cultivar 'Isabel Precoce' as a function of the application of increasing doses of NGE and Bioalho® is shown. The results showed that the increase in doses of both NGE and Bioalho® promotes increase in percentage of sprouted buds of the cultivar 'Isabel Precoce', 30 days after application of the treatments. It turns out that there is an optimal concentration of both the homemade product NGE and the commercial product Bioalho® which provides maximum budding, and concentrations greater than this may result in a reduction in the percentage of sprouted buds. The doses of Bioalho®, Bioalho® + MO 2%, NGE and NGE + MO 2% are 20, 20, 45 and 40%, respectively, which generate the maximum budding in the cultivar 'Isabel Precoce'. This means that concentrations higher than these can cause phytotoxicity to the plant and consequently reduce the percentage of sprouted buds. In this way, the NGE, homemade product, characterized by extraction and production, with low toxicity and high efficiency in shoots stimulation,  is  a  potential  substitute for H2CN2 in overcoming dormancy of the cultivar 'Isabel Precoce'. Similarly, the commercial product Bioalho® can also substitute the H2CN2. However, it should be remembered that there is an optimal dose that promotes break in dormancy, and higher doses can cause antagonistic effects, thereby reducing the shoots.

The results of this study demonstrate that there is a positive action in NGE and Bioalho® on overcoming the dormancy for 'Isabel Precoce' plants. The treatments NGE 15% added to MO 2%, NGE 20% added or not to MO 2% and Bioalho® 15 and 20 added or not to MO 2%, stimulated the budding of the vines 'Isabel Precoce', which showed similar effects as the conventional treatment with H2CN2.