This study is aimed to describe the germination process of Mouriri elliptica Martius, a species in the Melastomataceae family that is native to the Cerrado (tropical savannah) and popularly known in Portuguese as croada, coroa de frade [friar’s crown], croadinha [little croada], puçá-preto [black net], or jabuticaba-do-Cerrado. The species has significant potential for use as food and medicine; however, there is a dearth of scientific studies on this plant. Two experimental tests were performed to clarify the germination process of this species: Germination was evaluated in vitro by integrating fruit ripening and culture medium, and the emergence and initial growth of M. elliptica Mart. seedlings obtained from seeds soaked for different lengths of time were observed in a greenhouse. It was verified that the in vitro environment was not effective for germination independent of the culture medium, even using known and effective methodologies for breaking dormancy in seeds of this species. For the emergence of seedlings, it was found that soaking seeds in distilled water for two days was the optimal length of time for seedling production.

Mouriri elliptica Mart. is popularly known in Portuguese as coroa de frade [friar’s crown] or croadinha, and in a study by Rufino et al. (2011), the species M. elliptica Mart. is referred to as puça [net]. This plant belongs to  the  family Melastomataceae; it can reach 4 to 6 m in length and is found in the Brazilian states of Goiás, Mato Grosso and Mato Grosso do Sul (Silva et al., 2001). According Silva et al. (2001),  this  plant  has  occurence  in  Cerrado  and cerradão fitofisiony, yout frutification occur at September and December. According to the International Union for Conservation of Nature (IUCN, 2014), certain species of the genus are considered threatened with extinction, including Mouriri completens (Pitt.), M. laxiflora (Morley), M. gleasoniana (Standl.) and M. panamensis (Morley); however, M. elliptica Mart. does not appear to be threatened at this time.
The food and medicinal potential of M. elliptica Mart. Has been empirically established and was first described by Almeida et al. (1998) and Silva et al. (2001), who highlighted the lack of research. Currently, the shortage of publications on this plant could reflect the difficulty of finding it in its natural habitat. Articles in relevant journals are restricted to phytosociological surveys of the Pantanal biome and characterizations of its potential for vitamin C production and as an ulcer therapy (Moleiro et al., 2009; Rufino et al., 2011).
Interest in the conservation of native Cerrado species prompted the study by Vasconcelos et al. (2010) on the dormancy and breaking of dormancy in M. elliptica Mart. seeds, which was the first such report and verified that soaking seeds in distilled water for up to 48 h and mechanical scarification increased germination rates compared with seeds that did not receive such treatment. However, the combined effect of soaking and scarification was not evaluated.
For the genus Mouriri, only any studies have been conducted on its germination and chemical composition (Salis and Mattos, 2010; Vasconcelos et al., 2010; Rufino et al., 2011; Silveira et al., 2013), and there is a lack of research related to in vitro propagation in this genus (comment author). Therefore, the aim of this study was to evaluate the influence of the fruit ripening stage as well as the influence of seed scarification and soaking on the germination of seeds in vitro and in a greenhouse.

Tests were performed in the Plant Tissue Culture Laboratory of the Federal Institute of Education, Science and Technology of Goiás, Rio Verde Campus, Goiás (GO), Brazil (Instituto Federal de Educação, Ciência e Tecnologia Goiano, Câmpus Rio Verde, GO). The M. elliptica Mart. fruits for Test 1 were collected in October 2013, and fruits for Test 2 were collected in November of the same year in the district of Planalto Verde, municipality of Montividiu, GO, Brazil at 17º 19.201’ S, 51 33.500’ W and 982 m.a.s.l.
A digital caliper was used to obtain biometric parameters, which included the mass (g) and longitudinal and equatorial diameter of the fruits and seeds. The ratio between the equatorial diameter and longitudinal diameter was obtained to determine the fruit shape.
Test 1: In vitro germination of Mouriri elliptica Mart. seeds in different concentrations of sucrose and fruit ripening
M. elliptica Mart. seeds were obtained from ripe fruits (epicarp partially orange) (Figure 1A) and unripe fruits (epicarp partially green) (Figure 1B). After biometric analyses of the fruits, they were manually de-pulped using a sieve and running water. 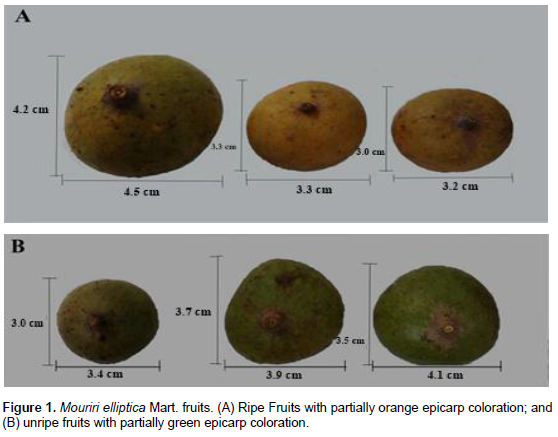 Once de-pulped, four hundred seeds were used, being two hundred from mature fruits and two hundred green fruits, were washed in running water and subsequently subjected to a dormancy breaking test following the methodology of Vasconcelos et al. (2010). Briefly, the seeds were soaked in distilled water for 48 h at room temperature (25±3°C); disinfected in a laminar flow cabinet, with the seeds remaining for one minute in 70% alcohol and four minutes agitated in commercial 100% sodium hypochlorite (Qboa, Industries Anhembi, Curitiba-PR, Brasil); and then rinsed three times with distilled and autoclaved water. For in vitro germination, the seeds were inoculated in test tubes containing 10 mL distilled and autoclaved water in 0, 30, 60 and 90 gL-1 sucrose concentrations. To avoid submersion of the seeds, “germitest” paper was used as a support. The seeds remained in these conditions for 60 days in a grow room at a temperature of 25 ±3ºC and photoperiod of 16 h.
The percent germination and seed contamination were evaluated at 60 days after inoculation (DAI). The experiment was conducted in an completely randomized design with a 2 × 4 factorial design of maturation [2] and sucrose concentrations [4], with four repetitions.
To investigate seed viability at the end of the test, a tetrazolium test with four repetitions of ten seeds was performed. A tetrazolium solution of 0.075% was used at 30ºC for 24 h.
Test (2): Scarification and soaking of M. elliptica Mart. seeds
Seeds from ripe fruits (Figure 2B) and de-pulped fruit  (with  the  aid of a sieve) were used. To evaluate the effect of scarification (Figure 2C), one group of seeds was sanded opposite the hilum using 60 grit sandpaper based on the techniques of Santos et al. (2004). To evaluate the effect of soaking, the seeds were maintained in a beaker containing distilled and autoclaved water and placed in a Mangelsdorf germinator at a temperature of 30ºC forzero, two, four and six days, with water changed every two days (Figure 2D).
To determine the soaking curve, four repetitions of ten seeds were used. The seeds were weighed hourly for the first six hours, every two hours for the next six hours and every 12 h until reaching 72 h from the beginning of the soaking process.Subsequently, the seeds were weighed daily. To determine the water content, the greenhouse method 105±2°C was used, and the wet weight was used as a base until a constant mass was achieved.
After the established soaking times had elapsed, four samples from 15 seeds were placed in plastic tubes containing the commercial substrate Trimix® andmaintained in a greenhouse with three daily irrigations. Before seeding, the seeds were treated with fungicide [active ingredients(carboxin + thiram): 200+200 gL-1] at doses of 500 mL to 100 kg seeds and 500 mL distilled water  to 100 kg seeds (Fungicide, Chemtura Indústria Química, São Paulo – SP, Brasil). 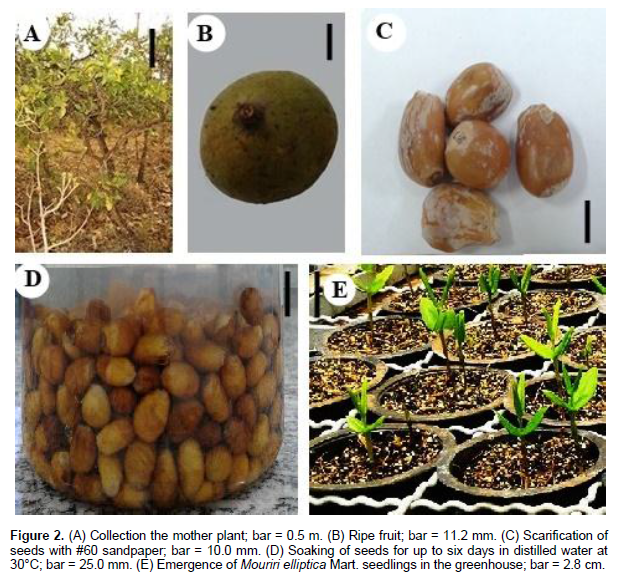 An evaluation was performed 60 days after seeding (DAS), and the percent emergence, length and numbers of leaves were analyzed (Figure 2E). The experimental design was entirely randomized in a factorial arrangement of two(scarification) by four (soaking times of zero, two, four and six days), with four repetitions of 15 seeds.

Biometrics
The biometric analyses showed diameters with homogenous values. In Test 1 (Table 1), the fruits had an average equatorial diameter of 35.22 mm, longitudinal diameter of 28.68 mm and mass of 21.69 g. In Test 2, homogeneity of the fruit diameters was also verified. According to the biometric parameters, M. elliptica Mart. fruits have an oval shape and are flattened, which was confirmed by the ratio of diameters that reached values above 1.20.

Test 1: In vitro germination of Mouriri elliptica Mart. in different concentrations of sucrose and fruit maturation
After 60 days of cultivation, in vitro germination of the seeds was not observed; therefore, it was not possible to fit a mathematical model to explain the data as a function of increases in sucrose concentration, due to low germination percentages. However, a high percentage of contamination (30.62%) was observed.
The high rate of contamination observed in this study could be the result of the disinfection method and high resistance and impermeability of the tegument. To guarantee more effective disinfection, Couto et al.  (2004) removed the tegument of seeds, which resulted in minimal contamination of 9.52% during the in vitro germination of seeds of mahogany (Swietenia macrophylla King).
The resistance of the tegument implies a lack of water absorption, which is necessary in the germination phase. Because no studies have reported on the in vitro micropropagation of this species, additional tests should be developed to investigate the efficacy of breaking tegumentary dormancy and achieving in vitro germination.
Because in vitro germination was not demonstrated, the tetrazolium test was performed (Table 2), which identified seed viability at 10% from ripe fruits and only 5% for seeds from unripe fruits. Thus, performing the tetrazolium test according to the adapted methodology permitted sufficient coloration to distinguish vigor; however, the seeds suffered from high mortality in this cultivation environment (Figure 3).

There was an interaction between soaking time and scarification that influences the emergence and length of seedlings. However, only soaking time affected the number of seeds.
The scarified seeds could not be fit to a mathematical model to explain the behavior of the data on seedling emergence and length, which reached an average of 50.83% and 4.12 cm, respectively (Figure 5A to B). For non-scarified seeds, an increase in percent emergencewas observed after soaking the seeds for two to six days, whereas a greater length (4.6 cm) was observed in the seedlings obtained from seeds soaked for two days. A decrease in the number of leaves was observed with an increase in soaking time, with values of 2.90 cm at time zero and 1.76 cm at six days (Figure 5C).
For M. elliptica Mart., gibberellic acid, sulfuric acid and water immersion, cooling and heating and mechanical scarification were studied by Vasconcelos et al. (2010), who achieved success with pre-soaking in gibberellic acid, soaking in water for 48 h and mechanical scarification of seeds. However, increased soaking times, which is a simple and inexpensive method, were not evaluated; thus, the study presented here is essential, and the results verified that an increase in soaking time of non-scarified seeds for up to six days has an impact on seedling emergence in this species, which exhibits tegumentary dormancy.
The efficacy of breaking tegumentary dormancy by mechanical scarification was effective for the species Stryphnodendron adstringens Mart.,Dimorphandra mollis Benth,Sterculia foetida L. and Bowdichia virgilioides Kunth., showing that this type of dormancy is common  in native species of the Cerrado (Santos et al., 2004; Albuquerque et al., 2007; Martins and Nakagawak, 2008; Oliveira et al., 2008). 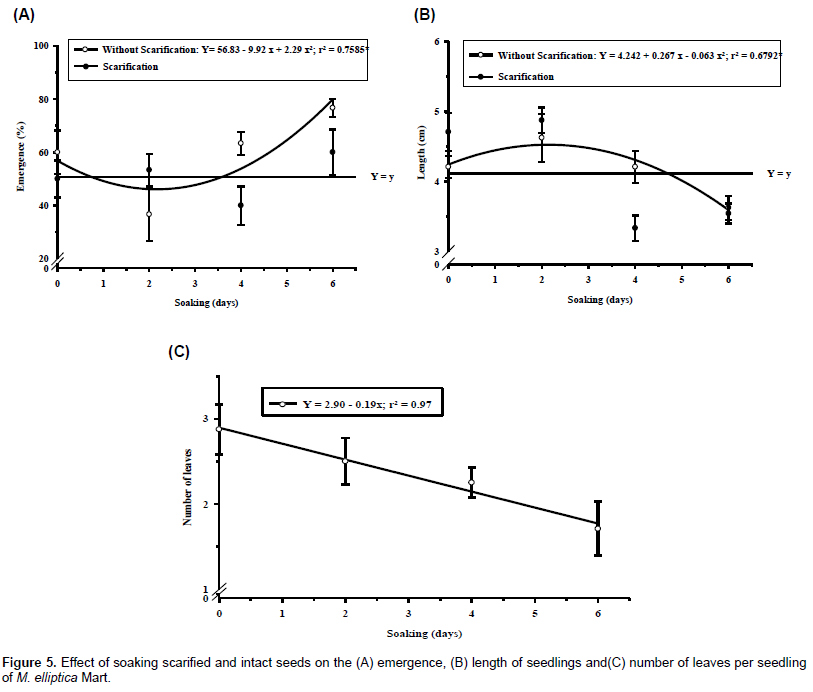 In vitro germination of M. elliptica Mart. seeds did not occur, and this behavior was independent of fruit ripeness and sucrose concentration in the culture medium. In non-scarified M. elliptica Mart. seeds, increased values for percent emergence occurred with increases in seed soaking time for up to six days. Seedlings with a greater leaf number and length were obtained from scarified seeds and seeds soaked for zero and two days, respectively.