Allometric relationships have been used widely as a fast approach to estimate biomass and leaf area in many plant species without destructive sampling. Several allometric functions have been developed to estimate above-ground biomass (AGB) in field-grown East African Highland Bananas (EAHB). However, it is not clear if these functions apply to potted apple bananas hence the need for this study. Plants were randomly selected from different treatments to make a representative sample (n=60) across the range of plant heights and vigor in the trial. For each plant, one fully expanded and unfurled leaf was randomly selected to measure and record its length (L) and width (W) at the widest point. The leaf was drawn to scale on squared paper to determine its true area, which was later compared with the area estimated as the product of L, W and an allometric correction factor. The existing and developed functions were evaluated qualitatively using unit plots and quantitatively using the root mean square error (RMSE) and squared correlation coefficient (r2). Girth at 30 cm (G-30) was the best (p<0.001 and R2 = 89%) input variable for estimating apple banana AGB. It was recommended that leaf area for the potted apple banana plants can be estimated using the existing function but the developed function should estimate AGB with G-30 as the independent variable.

Biomass accumulation and leaf area of a plant are key indicators for plant growth and productivity (de la Riva et al., 2016; Lemaire et al., 2019). Leaf area is important in processes like photosynthetic light absorption, carbon uptake and assimilation, transpiration of water, and emission of volatile organic compounds (Fleck et al., 2012). Conventional methods for determining plant biomass accumulation involve destructive sampling, which is undesirable in some studies requiring repeated measures on the same plant (Stevens et al., 2020). On the other hand, the shape of most plant leaves renders ordinary mathematical formulae for determining area rather cumbersome, yet leaf area is an important variable affecting light interception, and hence photosynthesis and carbohydrate production. The use of a correction factor has been advanced to enable estimation of leaf area from conventional formulae for area determination with simple leaf dimensions such as length and width (Awal et al., 2004). Allometric functions have been widely used as a fast approach to estimate biomass and leaf area in the fields of forestry, ecology and horticulture (Nyombi et al., 2009; Ma et al., 2020) without destructive sampling. Allometry is the quantitative relationship between relative dimensions of parts of an organism and its overall size (Gayon, 2000; Niklas, 2004). In trees and bananas, the relative dimensions are usually the easily measurable plant parameters such as girth at the collar (or base), diameter at breast height (DBH), plant height, leaf width and length, and a number of functional leaves (Nyombi et al., 2009; Okore, 2014; Stevens et al., 2020). These parameters have been used to accurately estimate accumulated plant biomass in trees, forage species, coffee, cocoa, mango, soybean, black pepper and bananas among other crops (Tittonell et al., 2005; Kamusingize et al., 2017; Lemaire and Belanger, 2019), leaf area of Grande Naine bananas (Potdar and Pawar, 1991) and East African highland bananas (Nyombi et al., 2009; Stevens et al., 2020).

Girth at breast height (DBH) is the commonly used predictor variable (Shem et al., 2013; Kamusinginze et al., 2017) for estimating plant biomass. Other parameters used include girth at the base (Yamaguchi and Araki, 2004; Nyombi et al., 2009), and girth at 100-cm (Wairegi et al., 2009) and use of plant height (Kamusingize et al., 2017). Generally, the equations developed to fit in the general linear equation (Equation 1) with girth as the best predictor variable although they do not agree at what point of girth measurement.

Where, y is biomass (corm, leaves, above-ground or total biomass) in kg, x predictor variable-girth (at base or breast height or at 1m), a  and c are constants.

These functions have been used in predicting biomass accumulated in East African Highland cooking bananas but have not been tested for applicability to apple bananas. For this study, functions developed by Nyombi et al. (2009) predicting total biomass, above-ground biomass, the mass of leaves, and the mass of corm (Table 1) were evaluated for applicability in potted apple bananas since these were young plants of less than 100 cm in height. This was necessary because the accuracy of allometric functions’ prediction is species-specific since morphological traits vary with plant species and crop nutrition (Lemaire et al., 2019). Within a diverse species such as bananas, allometric relationships may be expected to differ between cultivars or clone sets of the same species or cultivar (Stevens et al., 2020). 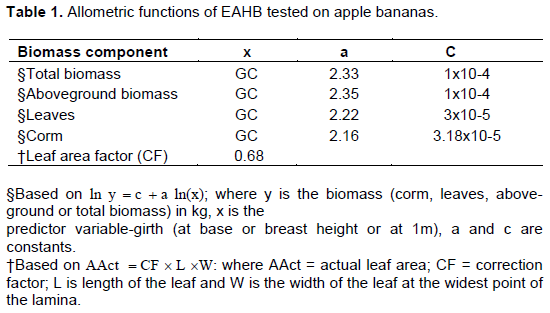 East African highland bananas exhibit morphological traits that markedly differ from those of apple bananas (Karamura et al., 2012). More so, these studies have been done on field-grown banana plants, whose morphology differs from that of small potted plants.

Diameter at breast height (taken at a height between 100 and 130 cm above the ground) was considered as the best explanatory variable for prediction of biomass in several species (Shem et al., 2013; Kamusingize et al., 2017), yet potted plants with confined rooting volume might not attain such height. Therefore, there was a need to test the applicability of existing allometric functions for estimating aboveground biomass and leaf area of potted apple bananas.

The broad objective of this study was to identify allometric functions that are suitable for estimating above-ground biomass and leaf area in young potted apple banana plants.

(2) To develop suitable allometric functions for predicting above-ground biomass and leaf area of potted young apple banana plants, if none of the existing functions proves suitable.

Experimental set up and data collection

A pot experiment was carried out in a screen house set up in Kifu Forest Reserve. Tissue culture plantlets of apple banana (Sukali ndizi) were planted in pots containing 10 kg of sterilized soil. Potassium was applied at 150 kg ha-1 from inorganic fertilizer (Muriate of Potash, 60% K2O), manure and Potassium solubilizing bacteria (KSB). Dry manure was used at a rate equivalent to 150 kg ha-1 and Frateuria auranta was used as the biofertilizer containing the potassium- solubilizing bacteria at a rate of 1 L ha-1. The inputs were applied at planting in full factorial combination resulting in 7 treatments (3 sole inputs, 3 binary combinations of the inputs, and 1 with all the 3 inputs integrated) plus a control that constituted the trial. That is, T1-no input (control), T2-MOP alone, T3-Manure alone, T4-MOP and Manure, T5-KSB alone, T6-MOP and KSB, T7-Manure and KSB, and T8-MOP x Manure x KSB. These were replicated 3 times in a randomized complete design. The experiment was kept weed-free through hand weeding. The pots were kept well-watered at all times.

For each selected plant, a count of functional (over 50% of the lamina still green and petiole still attached to the pseudostem) and dead leaves (less than 50% of the lamina still green or detached from the pseudostem) was done. Girth at the collar and 30 cm-height and plant height were also recorded. The plants were then carefully uprooted from the pots, washed to remove all soil without losing any roots and excess water mopped off before weighing individually using a digital weighing scale (±0.1 g) to determine total fresh weight. The different biomass parts (roots, corm, pseudostem, and leaves) were separated from each other using transverse cuts as shown in Plate 1. The fresh weight of each biomass part was taken on a digital scale and recorded separately for each plant. Thereafter, a sample was taken from each biomass part and its fresh weight taken on a digital scale and recorded before placing it in a uniquely labeled paper bag for oven drying to constant weight. 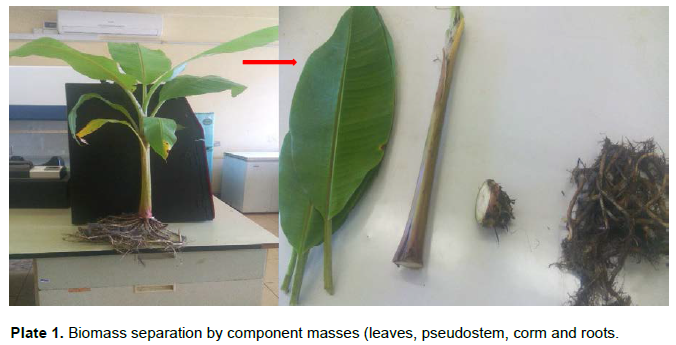 The width of the lamina was taken at two leaf points A and B (ensuring that the ruler was perpendicular to the leaf’s horizontal axis) where A was 2 cm from apex and B 2 cm from point of attachment of the lamina to the petiole. The lamina between points A and B was then divided into 10 segments, at each of which width was recorded. Using a suitable scale factor along with the length and width data, the shape of the leaf was drawn on a size A4 squared paper by joining the points demarcating the known leaf widths (Table 1). The actual area (AAct) of the leaf was then determined by the summation of full and truncated squares.

The observed biomass per plant was regressed on their corresponding values predicted (Piñeiro et al., 2008). The performance of each selected allometric function was assessed by comparing the deviation of the slope from 1 and the deviation of the intercept from 0 using t-tests in GenStat 19 (Baird et al., 2017). The performance of the existing allometric functions were further evaluated using the normalized root mean square error (NRMSE) and squared coefficient of correlation (r2) as computed from Equations 2 and 3, respectively (Taulya, 2015).

Where, xio and xip are observed and predicted values for the ith sampled plant, respectively and   ?0 is the mean of observed values for a given morphological input variable in a sample space of n plants.

The observed leaf area (AAct) was regressed on the apparent leaf area (AApp) to estimate the correction factor as the slope of this regression according to Equation 4.

The resulting allometric equation was evaluated for accuracy and precision on the testing dataset following the procedure described above for evaluating the existing allometric functions. All significant results are reported at a 95% confidence level.

Using girth at the collar (GC) and constants derived by Nyombi et al. (2009) gave statistically significant estimates of biomass (Table 2). However, from the unit plots, the existing functions under-estimated AGB by 15%. The total biomass and corm mass estimates were half the observed values while the leaf biomass estimate a quarter of the observed values (Figure 1). 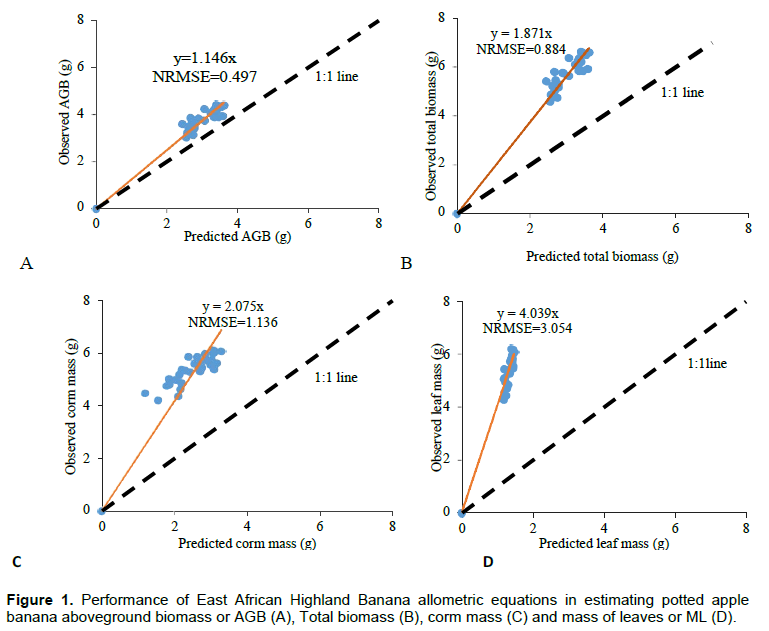 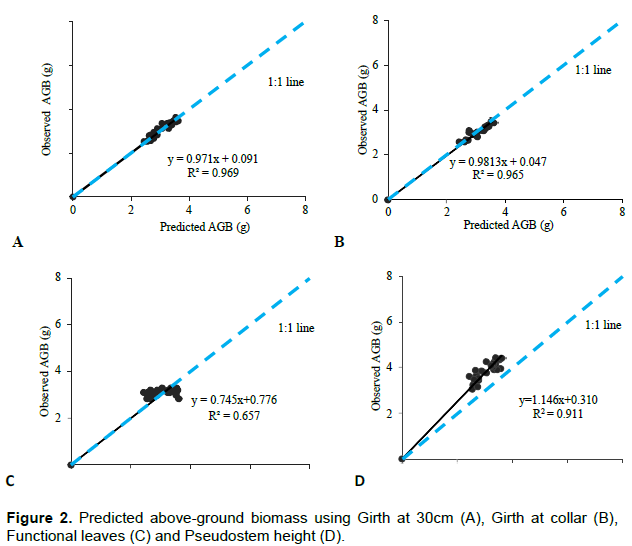 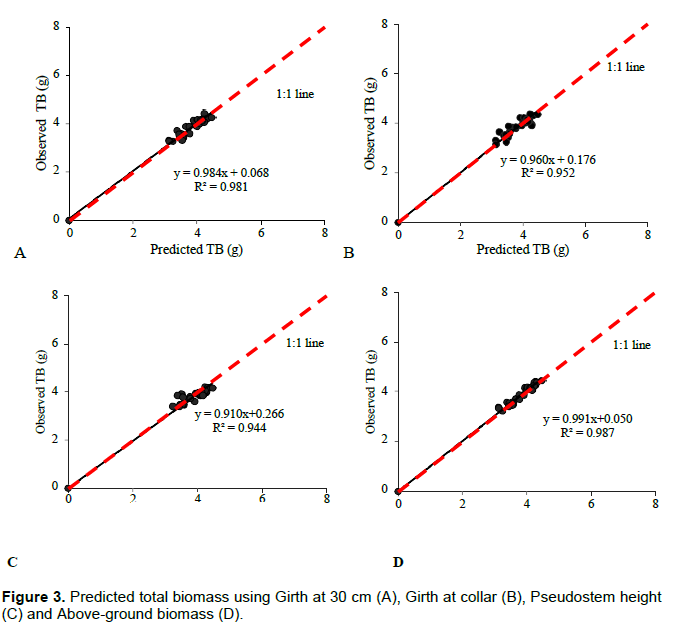 The previously developed equations to predict above-ground biomass in EAHB did not accurately predict above-ground biomass of young potted apple banana plants. The equations gave higher predicted estimates than expected (Figure 1 A-D). This could be due to the distinct morphological differences between EAHB and apple bananas. Apple bananas generally have thin pseudostems that support a small bunch of fruit of about 8 kg (Karamura et al., 2012), unlike the EAHB which has stout pseudostems meant to support heavier bunches of fruit. It is also possible that the generated allometric equations could not predict biomass accurately in apple bananas because they were generated on mature plants and included more components that were not catered for in this study.

The leaf area correction factor for apple banana was found to be 0.68 and an R2 of 0.98 (Figure 4A.). This was comparable with what was reported for EAHB (Nyombi et al., 2009), but lower than 0.84 reported in other banana varieties in India (Potdar and Pawar, 1991). Potdar and Pawar (1991) did not explain the protocol used in their study and also did not indicate the width and length range used. The leaf area correction factor generated by Nyombi et al. (2009) for EAHB of 0.68 on the other hand accurately predicted leaf area in apple bananas (Figure 4B). The correction factor by Nyombi et al. (2009) gave accurate predictions possibly because the shapes of banana leaves do not much differ between the mature and potted young plants.

To predict above-ground biomass in young apple bananas, girth at 30 cm height was a better parameter than either pseudostem height or girth at the collar. For estimation of above-ground biomass and total biomass in the subsequent studies, allometric equations having girth at 30-cm height as the predictor variable should be considered since it was consistently better than others in this study. Allometric functions developed for EAHB should be further tested on field grown apple bananas to ascertain their applicability. It is recommended that these developed functions be tested for applicability and reliability on grown apple banana plants since they were developed using young ones.