This experiment was conducted to investigate the effect of two processing methods (smoking and solar drying) on the proximate content, organoleptic characteristics and nutritional qualities of Clarias gariepinus. The moisture content of the smoked fish sample was lower (8.10%) than that of the sun dried sample (25.00%). The crude protein, carbohydrate, fat, ash, crude fibre and nitrogen free extract of the smoked fish sample were 67.20, 1.75, 13.20, 5.50, 3.68 and 2.32%, respectively, compared to 52.50, 4.07, 17.40, 11.40, 2.00 and 18.30% observed in the sun-dried fish, respectively. Mean scores of organoleptic evaluation showed that both processed fish products were preferred (≥ 7.00) by the trained panellists. However, there was significant difference (p<0.05) between the two processed fish products in terms of organoleptic assessment. Smoked fish had better flavour, taste, texture and general acceptability than the solar-dried fish as revealed by the panellists. With better reduction in moisture content and higher protein content observed in fish subjected to smoking, it is concluded that smoking is better than solar drying in the processing of C. gariepinus.

Fish is a highly nutritious food and it is particularly valued for its protein which is of high quality compared to meat and egg (Ojutiku et al., 2009). It contains high quality protein,  amino   acids  and  absorbable  dietary  minerals (Bruhiyan et al., 1993). Fish contribute to the world protein and is being used as a good tool for food therapy and source of therapeutic substances for the treatment of coronary diseases, auto-immune diseases,  anaemia and protein energy malnutrition (Glomset, 1986; Iheanacho et al., 2017).
However, it is highly perishable because it provides a favourable medium for the growth of macro and microorganisms after death (Ojutiku et al., 2009; Aliya et al., 2012; Babarinde et al., 2012; Oparaku and Mgbenka, 2012). Fish spoilage is a metabolic process that makes fish to be undesirable for human consumption due to changes in its sensory and nutritional characteristics, therefore, it has become increasingly important to ensure that fish once caught is fully and efficiently utilized to avoid deterioration. Thus, the processing and preservation of fresh fish becomes imperative in order to maintain product quality, reduce wastage and prevent economic losses (Olley et al., 2000).
To prolong the shelf life of fish, it is preserved by many processes including sun drying, solar drying, canning and smoking among others (Babarinde et al., 2016). Preservation of fish therefore generally slows down spoilage. Preservation methods are applied with an intention of making the fish safer and extending its shelf-life (Ghazala, 1994). Dried fish is a major component of harvested fisheries in many countries including Nigeria (Food and Agricultural Organization, FAO, 2006). About 25 to 30% of the world fish catch is consumed in the dried, salted, smoked form or combination of these processes (Aliya et al., 2012). Some of these processes, though important for preservation, have various effects on the physical and nutritional quality of fish because it has been observed that different processing and drying methods have different effects on the nutritional compositions of fish (Oparaku and Mgbenka, 2012).
African catfish (Clarias gariepinus) is highly relished and considered to be the most farmed tropical catfish species in Nigeria and other African countries (FAO, 2004). C. gariepinus is a good aquaculture candidate due to its hardy nature, high tolerance to poor water quality conditions, easy adaptation in captivity and high growth rate (Marimuthu et al., 2012).
The aim of this study was to comparatively assess the proximate composition and organoleptic qualities of C. gariepinus subjected to two processing methods as means of preservation.

Construction of solar tent
Solar tent dryer was designed to dry fish under hot and moderate temperature conditions prevailing in the city of Abakaliki, Ebonyi State, Nigeria. The solar tent dryer was built following the design described by Sengar et al. (2009). The dryer consist  of  three  main parts: collector, drying chamber, and inlet and outlet openings. The design thus consist of a plastic polythene sheet stretched over a metal frame work (76.2 cm wide × 106.68 cm long × 121.92 cm high) with side and top vent (30.48 × 30.48 cm) and the fish racks (45.72 × 45.72 cm) placed with wire mesh. The underneath surface is painted rocks which is used as a heat collector and transmitter area.
Sample collection
A total of seventy (70) adult C. gariepinus of about 450 g weight were procured from a private fish farm in Abakaliki and transported to the Department of Fisheries and Aquaculture Laboratory, Federal University, Ndufu Alike Ikwo, Ebonyi State within 30 and 40 min, in 200 L capacity plastic container containing aerated water. Fish were conditioned at the departmental fish pond till they were used for the experiment.
Solar-drying process
Fish sample was gutted and washed thoroughly in potable water and then split-open from the dorsal region. It was salted and allowed to drain before being laid on the drying racks (Figure 1). Conditions for fish drying such as temperature within the solar tent were recorded during drying as 34.5 (8.00 am) to 58.4°C (4.00 pm).

Smoking process
The departmental traditional smoking kiln was used for the smoke-drying process (Figure 2). The firing section of the kiln was filled with hardwood together with saw-dust and wood shavings to produce smoke. Fish sample was introduced into the smoke house (preheated for 30 min). The temperature of the smoking chamber was maintained between 60 and 70°C by adjusting the firewood burning in the earth. Fish fillets were smoked for 3 to 4 h. Smoked fish fillets were cooled overnight. 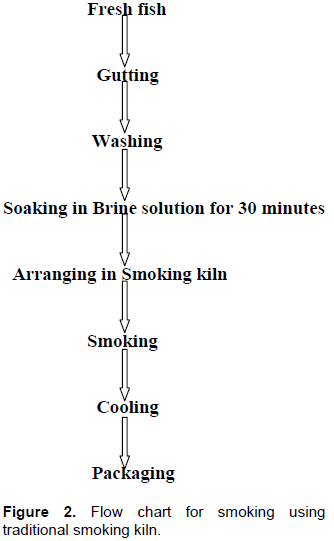 Proximate analysis
Fish samples (both smoked and solar dried) were taken to the Food Utilization and Nutritional Laboratory Unit of the International Institute of Tropical Agriculture (IITA) Laboratory, Ibadan for proximate analysis. Analysis was done following the procedure of Association of Official Analytical Chemists (AOAC) (2000).
Organoleptic assessment
Thirty (30) semi-trained panelists were selected from the Faculty of Agriculture, Federal University Ndufu Alike Ikwo, for the organoleptic assessment of fillets of smoked and solar-dried fish samples. Samples were packed in a transparent double layer polythene bag and tagged for identification and served to a panel of thirty assessors previously trained in basic organoleptic assessment procedure. Each panelist  masticated  fillets of coded samples with
ranked preferences in the following categories: taste, texture, flavour and general acceptability. A 9-point hedonic scale was used, 1 referring to extremely dislike and 9 as extremely like (Wichchukit and Mahony, 2014).
Statistical analysis
Data obtained from the experiment were subjected to paired samples t-test using Statistical Package for Social Sciences (SPSS) version 22, 2016. 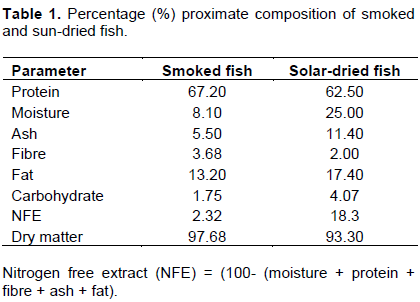 Sensory evaluation of smoked and solar dried fish (C. gariepinus)
The mean sensory scores for smoked and solar-dried C. gariepinus are presented in Table 2. The fish samples were assessed on the basis of flavour, taste, texture and general acceptability. The mean score range for all the organoleptic indices examined was between 7.00 and 8.53, indicating that both products were liked by panellists. However, a significant difference (pË‚0.05) was observed between them. 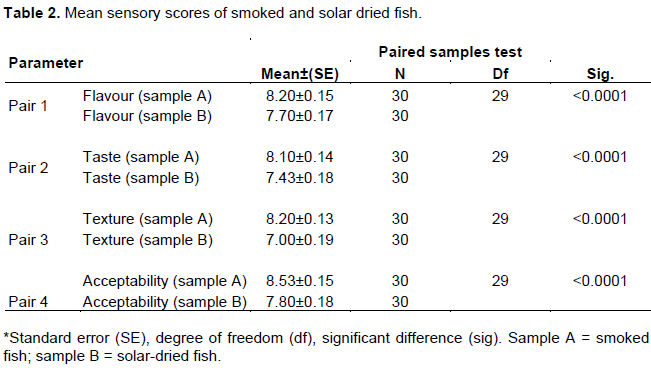 The results on comparative analysis of sensory characteristics   of   smoked   and   solar-dried    fish   are  presented in Figure 3. From the results, there was significant difference (pË‚0.05) between the two processing methods for all the organoleptic indices examined. 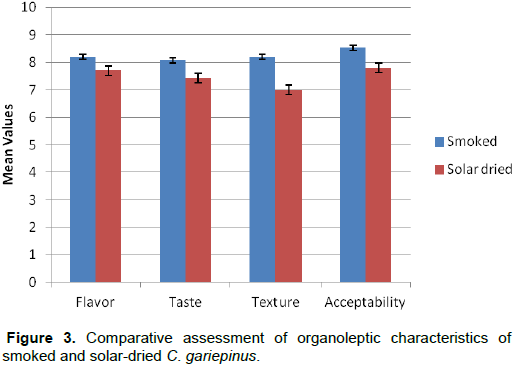 When compared with other animal protein sources, fish has been reported to contain high protein, mineral contents and also better amino acid profile (Bruhiyan et al., 1993; Ojutiku et al., 2009). The findings of the present study revealed that C. gariepinus subjected to two different fish processing methods contain high percentage of crude protein, ash and dry matter (Table 1). However, higher percentages for protein, fibre and dry matter were seen in smoked fish, while percentage values for ash, nitrogen free extract (NFE), fat, moisture and carbohydrate were observed to be higher in solar-dried fish (Table 1). Agbabiaka et al. (2012) reported 68.17% protein for C. gariepinus smoked with Anthonatha macrophylla wood. Ogbonna and Ibrahim (2009) reported 53.10% protein content for smoked fish (C. gariepinus). A study on the influence of traditional smoke drying on the quality of fish by Ali et al. (2011) revealed that percentage moisture content was least in smoked-dried fish compared to solar-dried, and the former had longer shelf life and keeping quality. Moisture content of catfish decreased sharply after the hot smoking process and this decrease was due to loss of water during smoking. Similar findings were reported by Omojowo et al. (2009) and Kumolu-Johnson et al. (2010), who opined that spoilage of fish resulting from the action of bacteria and enzyme activities could be reduced by salting and reducing moisture content through hot smoking. Moisture content of the smoked C. gariepinus samples is still at the safe recommended level for dried fish (6 to 8%) (Yanar, 2007). Akintola and Lawal (2011) reported that high protein content of smoked fish favoured the protection of fish from storage insect attack. Smoke-dried fish is the most acceptable form of fish product in Nigeria (Yanar, 2007; Stolyhwo and Sikorski, 2005). Huda et al. (2010) reported that nutrient content of fish is influenced by several factors including processing method and time of drying.
Reports of panellists revealed that both products were accepted or liked (7.00), since the least mean scores for all the organoleptic indices examined were ≥ 7. However, comparative assessment on organoleptic qualities of smoked and solar-dried fish indicates that smoked fish were preferred to the solar dried fish in terms of taste, texture, flavour and acceptability as was also revealed by the panellists (Figure 3). Preference in taste, flavour, texture and acceptability could be attributed to the processing method (smoke) which might add nutrient to the fish (Eyo, 2001). Agbabiaka et al. (2012) reported that the wood used for fish processing (smoking method) might contain natural chemical compounds (phenols, carbonyl   and   syringol)  which  are  responsible  for  the pleasurable taste, colour and flavour in smoked products. Secondly, high protein content (67.20%) and reduced moisture content (8.10%) of smoked fish could be a factor. High moisture as seen in solar-dried fish (25.00%) can induce oxidative rancidity and microbial actions; thus, leading to spoilage which might affect the flavour, taste, texture and acceptability of fish product (Agbabiaka et al., 2012). The finding of the present study is in agreement with the report of Kallon et al. (2017), who obtained similar result when comparing organoleptic qualities, production and economics of smoked fish and solar dried fish in Sierra Leone artisanal fishing industry.

The findings of the current study revealed that both processing fish methods are adequate and effective for fish processing. However, smoking method seems to be more efficient than solar drying method as it was observed that the smoking process added nutrient to the processed fish product and drastically reduced moisture which could prolong the shelf-life of the product.