Handroanthus heptaphyllus (Vell.) Mattos (Bignoniaceae), a tropical forest tree, is a source of wood suitable for the manufacture of fine furniture and chemical compounds with medicinal and insecticidal properties. Poor seed viability of this species limits the conventional propagation practice. In vitro germination of seeds was achieved in semi-solid Murashige and Skoog’s (MS) medium. A disinfection protocol was optimized for germination and growth of seedlings in vitro. Proliferation of shoots from cotyledonary and stem nodal segments was achieved in semi-solid MS medium supplemented with 22.2 µM 6-benzyladenine. Temporary immersion culture promoted elongation and rooting of shoots and reduced the shoot tip necrosis compared with culture on semisolid medium (6.7±2.7 and 41.7±7.0%, respectively; P = 0.001). Plantlets derived from temporary immersion showed better performance during the acclimatization phase. This is the first report on micropropagation of H. heptaphyllus.

Handroanthus heptaphyllus (Vell.) Mattos (Bignoniaceae), synonym Tabebuia heptaphylla (Grose and Olmstead, 2007) also known as black lapacho is a heliophile meso hygrophytic species native to the tropical forests and riverine areas of Brazil and Argentina (Ramos et al., 2008; Olmstead et al., 2009; Mori et al., 2012). The characteristics of the wood, suitable for the manufacture of fine furniture, as well as the presence of certain secondary metabolites that impart insecticidal and medicinal properties, attracted the interest of companies for commercial exploitation of wild populations (Alonso, 2000; Martínez et al., 2012). Despite of the predatory exploration, use of the species on a commercial scale is very limited because their seeds exhibit reduced viability and do not tolerate extended storage periods (Mori et al., 2012). No genetic improvement programs have been set up to offer-improved seeds, either for commercial purposes or for the establishment of seed orchards.

In vitro propagation of plants is a biotechnological tool that helps preserve the genetic resources of trees and crops. However, the information on in vitro propagation of the Handroanthus genus is scarce. The studies of Handroanthus impetiginosus have been limited to morphology and physiological aspects during seed germination (Amaral da Silva et al., 2004) and the physiological abnormalities due to hyperhydricity of shoots cultured in vitro (Jausoro et al., 2010). More recently, Larraburu et al. (2012) reported a protocol for the micropropagation of H. impetiginosus.

The objective of this study was to establish seedlings in vitro as a source of explants for micropropagation of H. heptaphyllus through nodal segment cultures and produce plantlets for the enrichment of degraded forests or the establishment of new forest plantations.

Pods with mature seeds of H. heptaphyllus were harvested from a 45-year-old tree grown in the wild reserve of the National University of Misiones (26°54’–59’S y 54°12’–18’W) and stored at 4°C until culture. The integument was removed and the uncoated seeds were surface disinfested with 70% ethanol for 1 min, transferred to 9 g·L-1 NaOCl aqueous solution for 15 min, and rinsed three times with sterile distilled water. Afterward, the seeds were cultured in 15 ml glass tubes (1 seed/tube) containing 4 ml of semi-solid Murashige and Skoog’s (1962) medium with 30 g·L-1 sucrose (MS). The pH of the media was adjusted to 5.8 prior to addition of the gelling agent (Agar Sigma A-1296, 6.5 g·L-1). The tubes were covered with aluminum foil and autoclaved at 143.2 kPa for 20 min. The cultures were incubated in a growth room at approximately 27±2°C under 14-h photoperiod (116 μmol m-2· s-1 photosynthetic photon flux density (PPFD), wavelength: 400 to 700 nm, from cool-white fluorescent lamps).

In vitro shoot multiplication and rooting

Cotyledon (CS) and stem nodal segment (SS) (1.5 to 2 cm long) with two axillary buds were collected from 15-day-old in vitro seedlings and singly cultured in 15 ml glass tubes containing 4 ml of semi-solid (6.5 g·L-1 agar) MS medium with 30 g·L-1 sucrose and 4.4 to 22.2 µM 6-benzyladenine (BA), with or without 1 µM indole-3-butyric acid (IBA). The numbers of responsive explants, sprouted buds per explant, and shoots with more than 5 mm in length were recorded after 15 days of culture.

To promote the elongation of the axillary shoots, CS and SS explants grown in MS supplemented with 22.2 µM BA were subcultured for 30 days to a 300 ml glass flask (10 shoots per flask) containing 100 ml of either semisolid (6.5 g·L-1 agar) or liquid half-strength MS (MS/2) medium with 15 g·L-1 sucrose and 0 to 4.5 µM gibberellin A3 (GA3). Flasks were closed with polypropylene caps containing two Millipore® filters that provided passive (Figure 1A) or assisted ventilation (Figure 1B). For the liquid media, the shoots were cultured in a temporary immersion (TI) system wherein the explants were in contact with the medium for 1 min every 4 h (Figure 1 C). To provide assisted ventilation to the shoots growing in semisolid medium, flasks were connected to the TI pneumatic system and the same frequency and duration of immersion was used for aeration. An ear pressure of 30 kPa was used for TI and assisted ventilation. 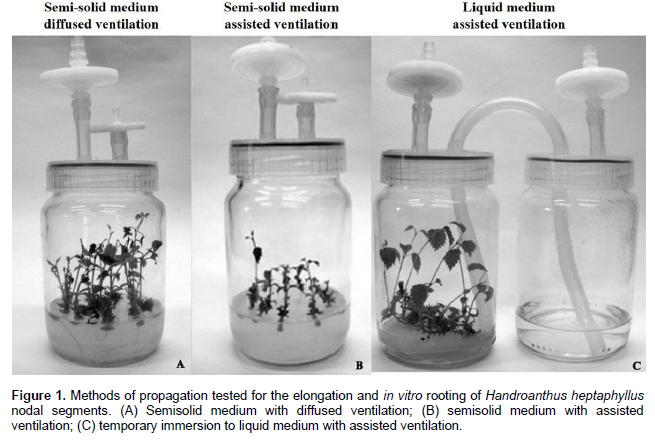 After 30 days of incubation, the elongated shoots grown in MS/2 medium without plant growth regulators were transferred to the rooting semi-solid or liquid induction medium consisting of MS/2 with 15 g·L-1 sucrose and 0, 25, 50, or 75 µM IBA for 3 days. They were then subcultured to the root expression medium of the same mineral composition, but without IBA for 15 days. Cultures were incubated under similar environmental conditions as described earlier.

Finally, the plantlets were transferred to 200 ml pots containing perlite plus controlled-release micro-fertilizer (OsmocoteÒ 18-5-9, 0.6 mg·cm-3 substrate). They were grown for 4 weeks in a growth chamber providing day/night air temperature of 25 to 27/20 to 22°C, substrate temperature of 22 to 25°C with a 14-h photoperiod (420 μmol·m-2·s-1 PPFD, wavelength: 400 to 700 nm, from high pressure mercury lamps). The hardened plants were transplanted to 3.2 L pots filled with pine bark, which provides proper drainage and aeration, plus controlled-release micro-fertilizer to promote and grown under greenhouse conditions for 12 weeks.

All the experiments were arranged in a completely randomised design. Each treatment consisted of 30 explants and each experiment was repeated three times. For acclimatization, 15 plantlets per treatment were studied. The results presented are the means of the replications with the standard error of the media (±standard error of mean [SEM]). Data were subjected to analysis of variance (ANOVA; GraphPad Software, San Diego, CA) following Tukey’s Multiple Comparison Test. To assess statistical significance, a probability level of 0.05 was chosen.

Shoot multiplication and plantlet formation was achieved from nodal segments of aseptically germinated seedlings of H. heptaphyllus by combining semi-solid medium; to encourage breaking of apical dominance during the proliferation stage, and automatic temporary immersion in liquid medium; to promote further growth and rooting of the resulting shoots. Preliminary experiments indicated that more than 90% of cotyledonary and stem nodal segments cultured in semi-solid MS medium sprouted after 15 days of culture (Table 1). BA at 4.4 to 22.2 µM in the culture medium promoted the formation of new shoots from axillary shoots. However, the higher concentration negatively affected shoots elongation. Also, the addition of 1 µM IBA to the MS medium limited the growth of shoots due to callus proliferation at the bases of the explants (Figure 2A to B). An optimal growth of shoots with good appearance and vigor was observed when the explants were cultured on MS sucrose 30 g·L-1 plus BA 22.2 µM in which 96.7±5.8% of the CS and SS nodal buds sprouted and produced 5.6±0.6 and 4.2±0.5 shoots per explant having 10.8±0.9 and 7.4±1.1 mm in length, respectively (Table 1). 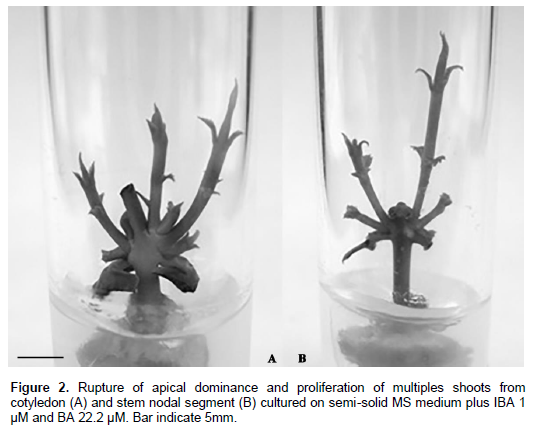 Neither the addition to the culture medium of GA3 nor the assisted ventilation promoted shoot elongation (Table 2). Gibberellins are a class of phytohormones with demonstrated effects on a number of physiological processes (Zawaski and Busov, 2014). These include breaking dormancy of vegetative buds and promotion of internode elongation of woody angiosperms (Junttila, 1991). Among the 125 gibberellins identiﬁed in plants, fungi and bacteria, only three GA1, GA3 and GA4, have been reported by studies with single gene dwarf mutants as directly effective in promoting shoot elongation (Nakayama et al., 1991). Our former results obtained from nodal segments of Ilex paraguariensis, a subtropical woody species, indicated that GA1 and GA4 were more effective in promoting shoot length when assayed at a wide range of concentrations while GA3 did not stimulate internode elongation (Sansberro et al., 2001). 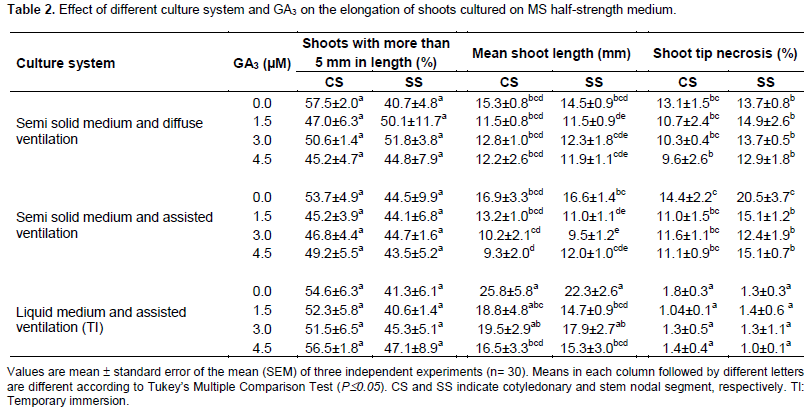 BA in the culture medium promoted the formation of new sprouts from axillary buds without significantly affecting the growth and development of shoots. However, the incidence of the shoot tip necrosis was observed during the in vitro shoot multiplication and rooting stages. After 2 weeks of culturing, necrotic apices were observed in shoots growing in semisolid medium provided with either diffused or forced ventilation. This physiological disorder is commonly seen in in vitro cultures affecting a wide range of herbaceous and woody plants (Bairu et al., 2009a) and it is caused by a complex set of factors including plant growth regulators (Bairu et al., 2009b), calcium and boron deficiency (Hepler, 2005; Martin et al., 2007), medium type and salt strength (Jain et al., 2009; Takura and Kanwara, 2011), gelling agent (Singha et al., 1990), aeration (Bairu et al., 2009a), and pH (Pasqua et al., 2002). Our results indicated that the use of liquid medium through a TI system could overcome the shoot tip necrosis of H. heptaphyllus and promote growth and rooting of shoots. Because the use of assisted ventilation of the flask with semisolid medium did not overcome this physiological disorder, the advantage of TI for producing healthy shoots and plantlets may be related to better availability of nutrients in the absence of hyperhydricity. The rooting process was affected by the physical conditions of the culture medium (Table 3). The result of this study showed 73.3 ± 5.8% of SS explants cultured in TI rooted in a plant growth regulators (PGR)-free half-strength MS medium. Addition of IBA only slightly promoted the morphogenetic process probably due to the juvenility stage of the explants. Although, the use of TI stimulated growth of the aerial part at the expense of root growth by increasing the shoot/root ratio, the growth and development of the plantlets during the acclimatization phase were the highest under TI (Figure 3A to E). This could be attributed to better morphological and anatomical features of the leaves which enhance the water balance during the acclimatization phase (Yang and Yeh, 2008). The rooting process occurs without callus formation. The in vitro rooting of juvenile elongated shoots of A. heptaphyllus may be stimulated without plant growth regulators, but the results of our experiment showed that the pre-treatment of the elongated shoots with 75 µM IBA for 3 days and subculturing to fresh half-strength medium increased this morphogenic process, whereby 96.7± 5.8% of shoots regenerated 2.4 roots per shoot with a shoot/root ratio close to 4 and with no symptoms of necrosis. 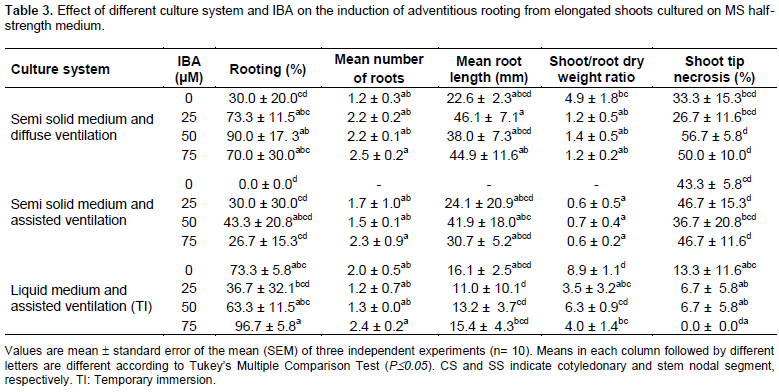 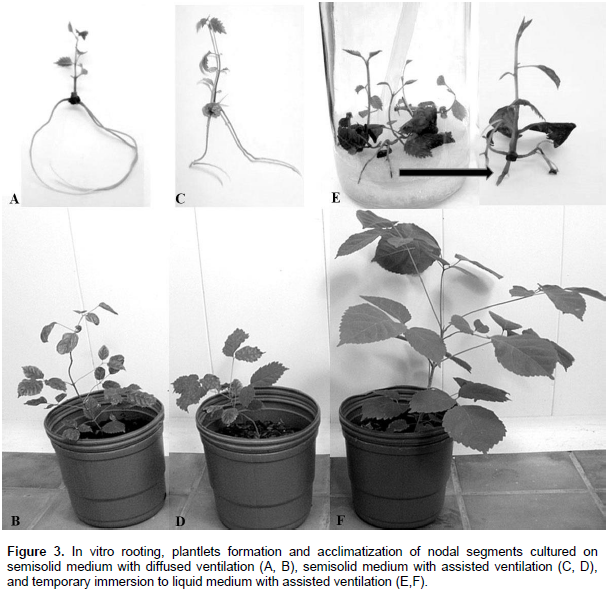 To our knowledge, this is the first report on micro-propagation of H. heptaphyllus. The establishment and multiplication of shoot from nodal segments cultured in semi-solid medium and the elongation and rooting of shoots in a TI system are an effective combination for propagating these threatened forest trees.

This work was supported by grants from ANPCyT (PICTO 2011-0213, PICT 2014-1246) and SGCyT (PI-A005/11, PI- 001/14). The authors extend their deep appreciation to anonymous reviewers for their critical comments. E. Duarte received a CONICET scholarship. P. Sansberro and C. Luna are members of the Research Council of Argentina (CONICET).