Pseudomonas aeruginosa   is an opportunistic pathogen that usually causes nosocomial infection in immuno-compromised patient with severe infections, such as cystic fibrosis, cancer, burn, urinary tract infection. They can also affect normal healthy human, which might cause dermatitis conjunctivitis, otitis externa and gastrointestinal infection (Hallin et al., 2012; Adesoji et al., 2015). P. aeruginosa is a highly adaptable bacterium, can survive in a wide range of environment and change its properties in response to changes in the environment (Lambert, 2002). The outbreaks of P. aeruginosa that are associated with different water sources such as drains, lakes and wastewater had been reported by Quick et al. (2014).
Antibiotic-resistant bacterial can be found in water sources from hospital, industrial or domestic wastes into watercourses (Chartier et al., 2014). It is due to contribution of the un-metabolized antibiotics in the water, which is excreted from humans. It may be a potential risk causing problem to human health (Email et al., 2010). Hospital wastewaters contain antimicrobial resistant bacterial with a level of at least a factor of 2 to 10 times higher than in domestic wastewater. Antimicrobial resistant bacterial gene transfer is great at high cell densities and under high antibiotic concentrations (Chartier et al., 2014). The effluents of the industries also act as one of influence on the pollution of the water bodies; these effluents can change the physical, chemical and biological nature of the water body (Hussain and Rao, 2013).
The characteristic features of the climate in Malaysia are uniform temperature, high humidity and ample rainfall. Malaysia mainly has 2 seasons, which are southwest monsoon season and northeast monsoon season (General Climate of Malaysia, 2016). November, December and January are the months with maximum rainfall, in the east coast while June and July are the driest months in most districts. Over the rest of the Peninsula with the exception of the southwest coastal area, the monthly rainfall pattern shows two periods of maximum rainfall separated by two periods of minimum rainfall (Chen et al., 2013; General Climate of Malaysia, 2016). Altering climatic conditions can change the volume and quality of water availability in both time and space, influencing the water usage practices. For an example, intensity of rainfall, or the period of time without rain will affect the quality of water in rivers and lakes through alteration in the timing and volume and temperature. Besides that, floods also have a probability of spreading diseases by over following the open sewage or inadequate sewage infrastructure (Corcoran et al., 2010).
Phenotyping methods are based on the ability of metal chelators, such as EDTA and thiol-based compounds, inhibit the activity of MBL (Manoharan et al., 2010). Double Disk Synergy Test (DDST) and Combined Disc Test (CDT) are most commonly used to detect the MBL producing P. aeruginosa then Hodge test. Modified Hodge test detects only carbapenemase activity, which prevents the use of EDTA and therefore, does not confirm the metal dependence of the carbapenemase (Kali et al., 2013). Modified  Hodge  test,  DDST  and  the CDT are easy, reliable, simple to perform and cheaper (Qu et al., 2009). The CDT is the most sensitive techniques for detecting MBL compared to DDST (Biradar and Roopa, 2015). DDST is used to distinguish MBL producing gram negative bacilli from MBL non producing gram negative bacilli. For those MBL producing P. aeruginosa isolates positive by DDST, are also positive by CDT for MBL production (Bhalerao et al., 2010).
Most of the studies were concentrated on the isolation of β- lactamase gene from clinical samples (Kumar et al., 2012; Upadhyay and Joshi, 2015). Therefore, the aim of present study is to detect the potentiality of MBL producing P. aeruginosa in water samples from various parts of Malaysia. The objective of this study is to determine the presence of P. aeruginosa from water source, to evaluate the MBL producing P. aeruginosa by using modified Hodge test, double disk synergy test (DDST) and combined disk test (CD). 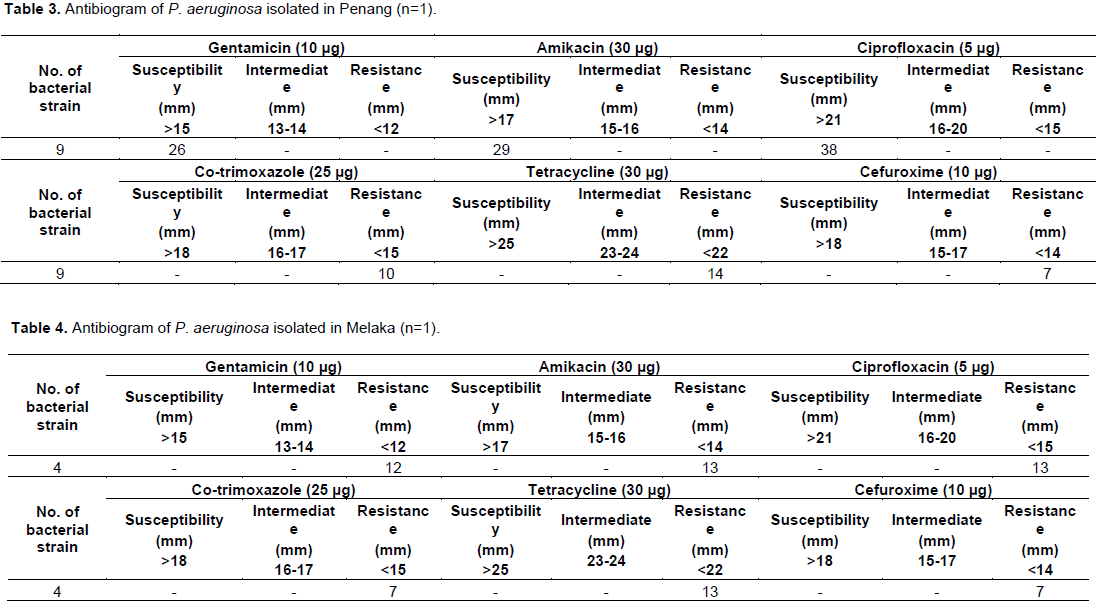 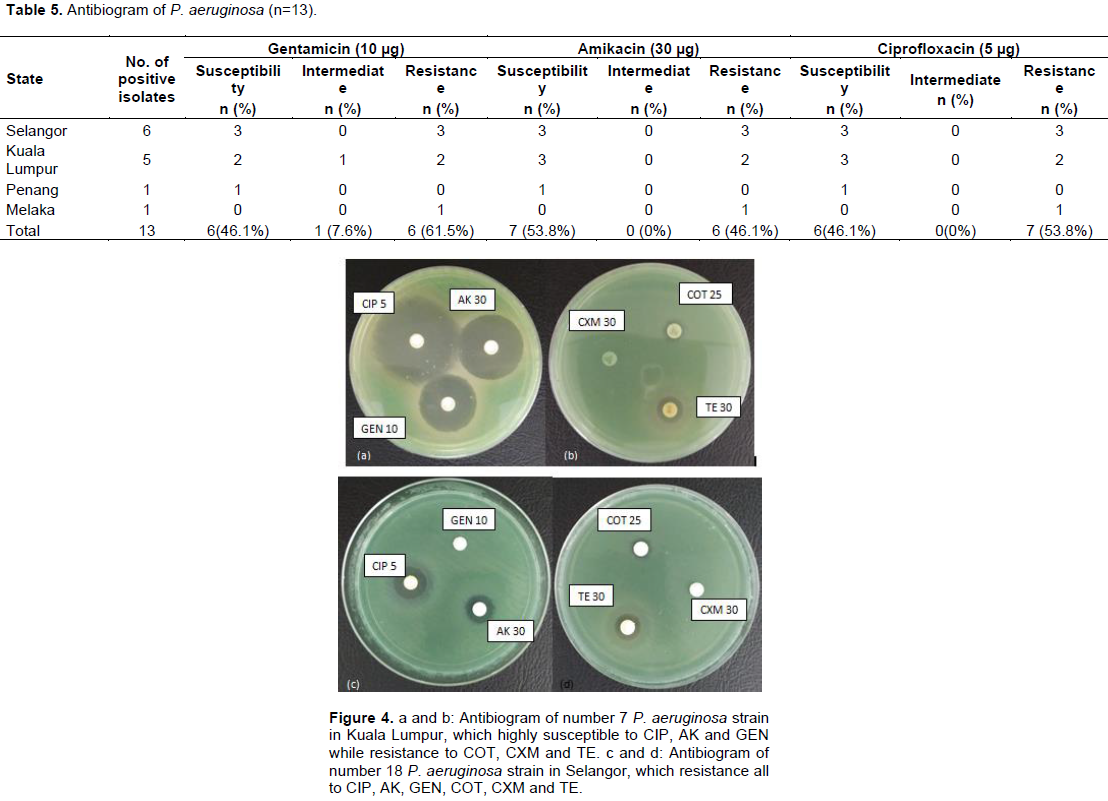 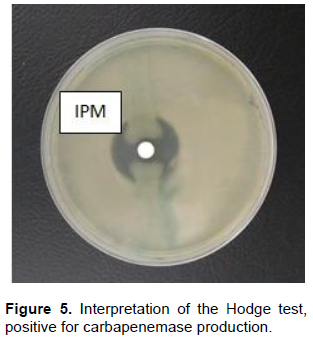 Imipenem-EDTA combined disc test (CDT)
Out of the 13 MDR P. aeruginosa isolates, Selangor and Kuala Lumpur gave MBL positive, which were 5 out of 6, 4 out of 5 and only one from Melaka respectively. CDT had detected 10 MBL positive and only 3 MBL negative among  the 13 MDR P. aeruginosa isolates. The MBL positive observed increase in EDTA with imipenem inhibition zone more than 7 mm in the imipenem alone (Table 6 and Figure 6). 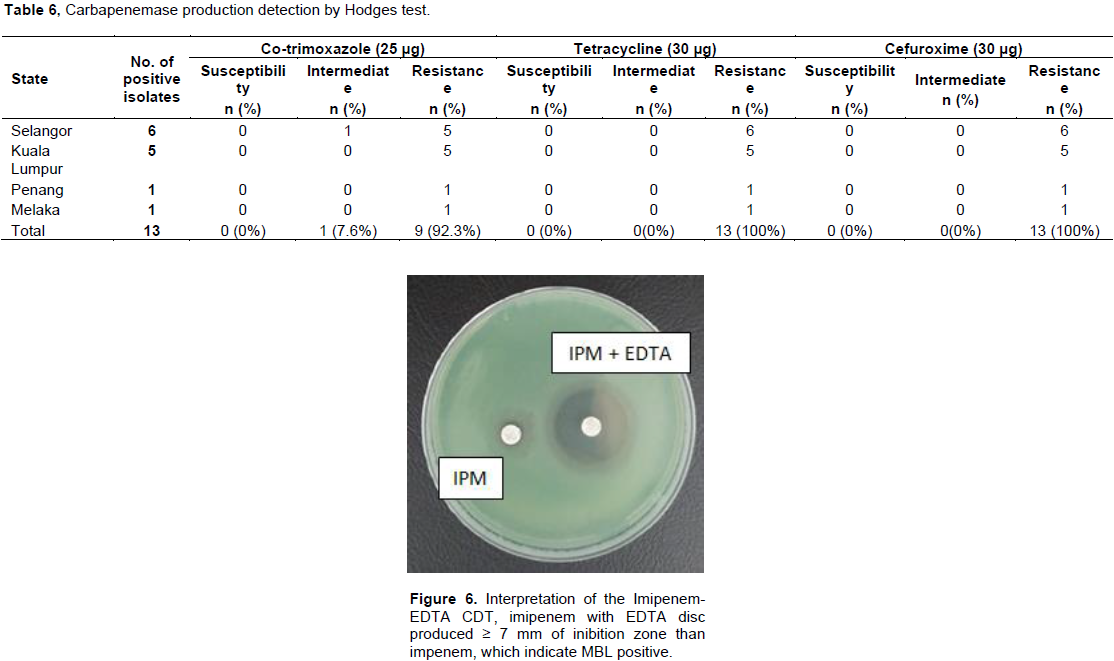 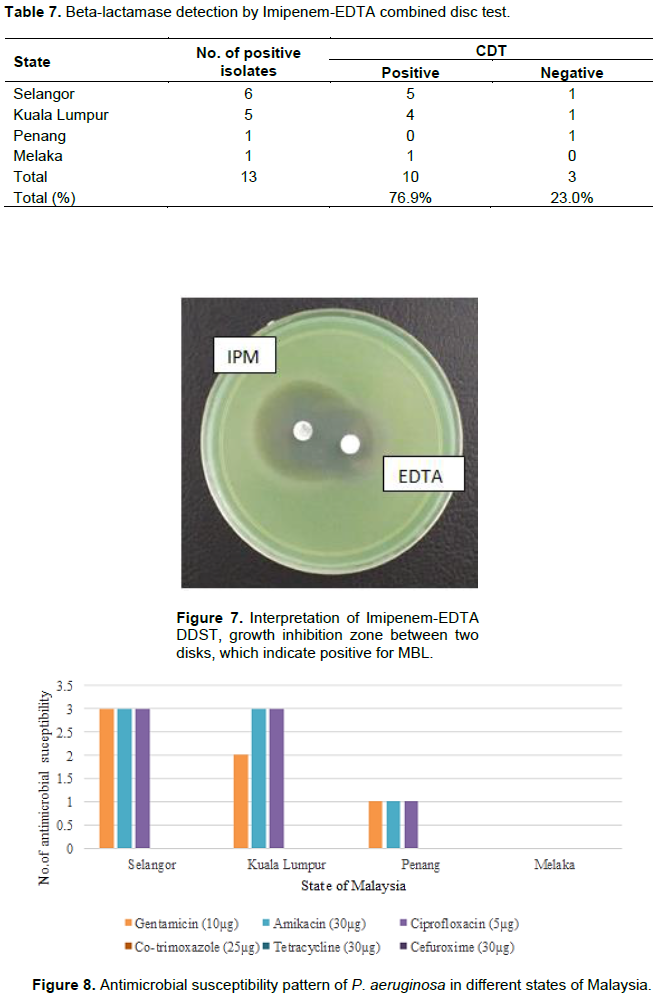