In this study, the genetic diversity and structure of 90 monosporidia mating-type isolates of Sporisorium scitamineum collected from China were comprehensively evaluated based on the DNA extracted from mating-type haploid sporidias using inter-simple sequence repeat (ISSR) polymorphism molecular marker technique. Fifteen selected ISSR primers produced 162 amplified DNA fragments, of which 115 (71.0%) were polymorphic. Polymorphic information content (PIC) values ranged from 0.12 to 0.92 with an average of 0.82, indicating that a moderate degree of genetic diversity exists among these 90 monosporidia mating-type isolates of S. scitamineum collected from China. Genetic differentiation coefficient (Gst) was calculated to be 0.320, indicating that the total genetic variation between populations was 32%, while 68% of the total genetic variation was from within populations. Meanwhile, gene flow (Nm) was 1.063, indicating lower rate of gene flow between populations. Based on the ISSR marker data set, the results of clustering by the unweighted pair group method of arithmetic average and principal component analysis were similar and could divide these 90 S. scitamineum isolates into two main groups. The isolates collected from the same province tend to cluster in the same main groups. This study shows that the genetic differentiation of these 90 monosporidia mating-type isolates of S. scitamineum was highly correlated with the ecological environment of collection sites, and the heterogeneity of ecological environment was the main driving force for the differentiation of S. scitamineum.

S. scitamineum sample collection and isolation
A total of 90 monosporidial mating-type isolates derived from 90 single-whips (sori) of sugarcane smut were collected from the five primary sugarcane-producing provinces (19 planting districts) in China in 2014, including Guangxi (45 isolates), Yunnan (16 isolates), Guangdong (16 isolates), Hainan (11 isolates) and Jiangxi (2 isolates) (Table 1 and Figure 1). Guangxi mainly belongs to inland and subtropical climate, Yunnan is located in the inland plateau with diverse climate type, mainly including tropical, subtropical and frost climate, Guangdong is mainly coastal subtropical and northern frost climate, and Hainan belongs to the coastal tropical climate. Monosporidial mating-type isolates of S. scitamineum were prepared according to the previous studies of Moosawi-Jorf and Izadi (2007). 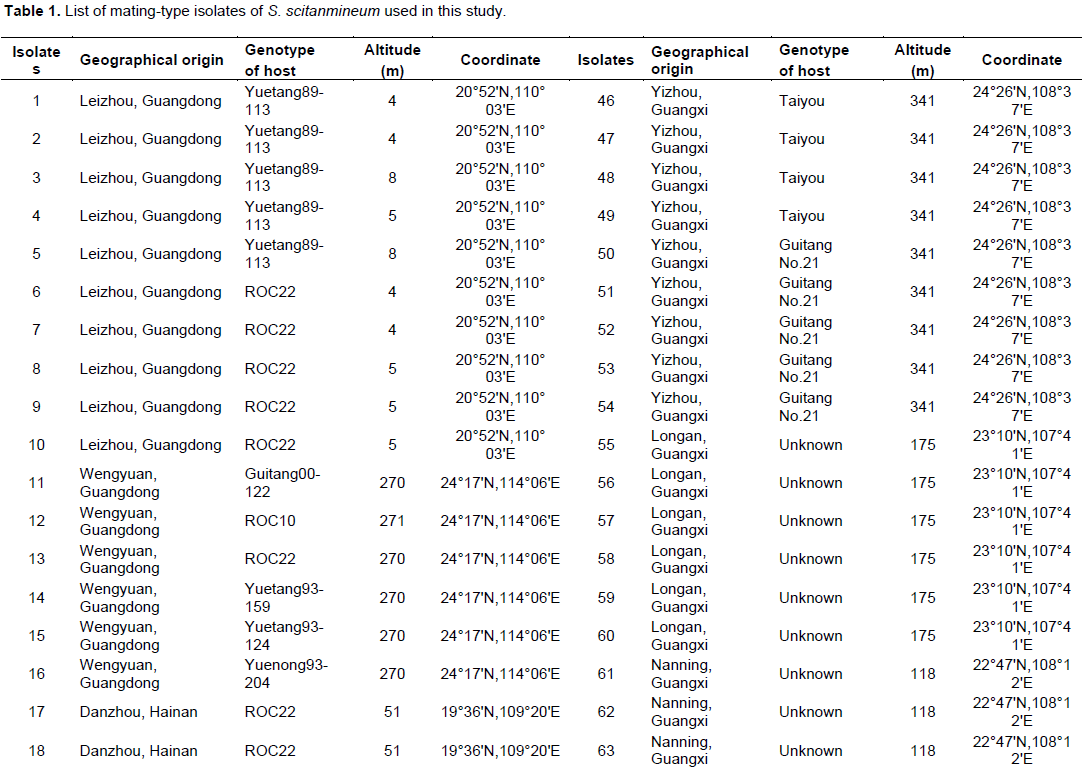 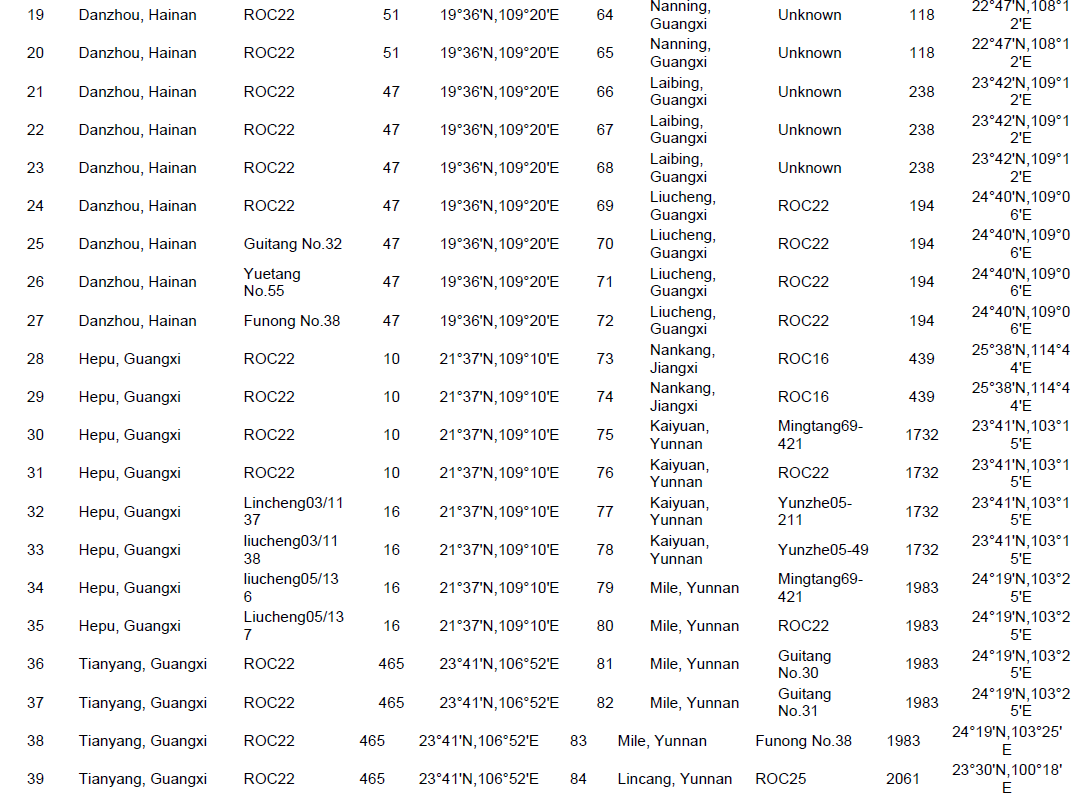 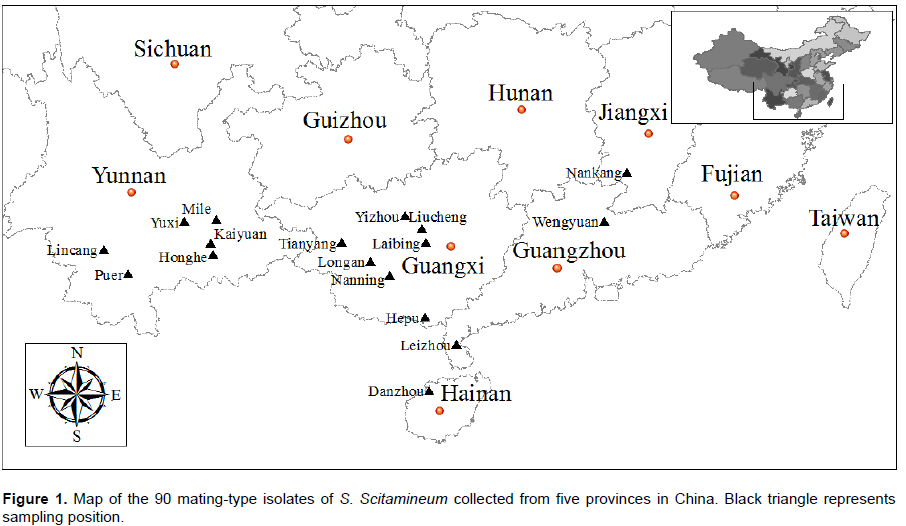 DNA extraction and identification
Monosporidial DNA samples were prepared by using cetyl trimethyl ammonium bromide (CTAB) method as described by Shen et al. (2006). The purified DNA was quantified by measuring the absorbance at 260 nm. The purity of DNA was determined by calculating the ratio of absorbance at 260:280 nm. The DNA samples were then diluted to prepare a working solution of 20-30 ng/μl for PCR analysis, then, stored at -20°C for further use. To ensure that all the DNA samples were from S. scitamineum, these DNA samples we amplified by S. scitamineum specific primers SL and SR (Shen et al., 2012b).
ISSR analysis
Fifteen S. scitamineum ISSR primers used in this study (Table 2) were commercially synthesized by the Sangon Biotech Co. Ltd. (Shanghai, China) and rTaq DNA polymerase was purchased from the TaKaRa Biotechnology Co. Ltd. (Dalian, China). The PCR reaction mixture was performed in a final volume of 25 μl containing 1 μl of genomic DNA (about 20 to 30 ng), 0.3 μl of rTaq DNA polymerase (5 U/μl), 2.5 μl of 10 × PCR reaction buffer (with Mg2+), 2 μl of 2.5 mM dNTP mixture and 1 μl of 5 μM ISSR random primer. The final volume was adjusted to 25 μl with 18.2 μl sterile distilled water (Shen et al., 2012a). PCR amplification was performed on a MyCyclerTM thermal cycler (BIO-RAD inc.), with an initial denaturation at 94°C for 5 min, followed by 35 cyclers each of denaturation at 94°C for 30 s, annealing at 50°C for 45 s and extension at 72°C for 2 min, and a final extension of 72°C for 8 min. The amplification products were electrophoresed on a 1.8% agarose gels with 0.5×TBE buffer at 100 V for 1.5 h along with the DL 2000 DNA markers. The separated DNA fragments were stained with 5% GoldView™ and photographed with a Gene Genius Biomaging System. The experiment was repeated for at least once. 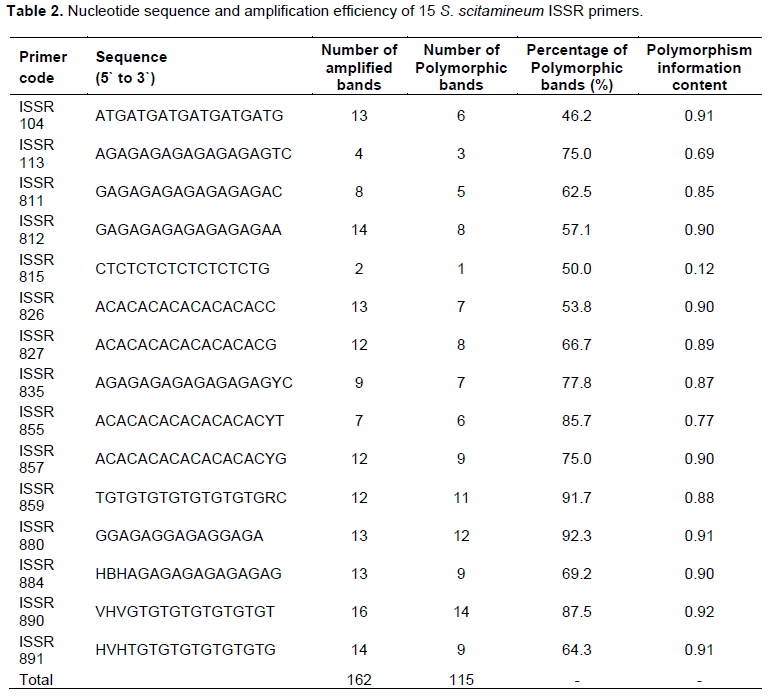 Data analysis
Based on the electrophoresis results of amplification products by ISSR-PCR, the samples with DNA band were marked as “1”, whereas those without DNA band were marked as “0” (only the repeatable bands in the DNA electrophoresis analysis were recorded). Jaccard similarity coefficient, unweighted pair group method with arithmetic mean (UPGMA) cluster analyses and principal component analysis (PCA) were conducted by using NTSYS-pc2.10 analytical software (Rohlf, 2000). Polymorphic information content (PIC) was calculated using formulas described by Botstein et al. (1980). Population genetic parameters such as the observed number of alleles (Na), effective number of alleles (Ne), Neiï¼Œs gene diversity index (h), Shannonï¼Œs information index (I), genetic differentiation coefficient (Gst) and gene flow (Nm) were used to evaluate the genetic diversity within each population by POPGENE1.31 (Yeh et al., 1999).

Isolation and identification of monosporidial mating-type isolates of S. scitamineum
Teliospores began to germinate 20 min after culture. Often, teliospores were germinated on YePS medium after 24 h and produced promycelia and sporidia or produced mycelia. Forty-eight hours  after  spreading  the germinated teliospores on YePS medium, white wool-like monocolonies (dikaryotic mycelium) were produced on the medium (Figure 2a). Yeast-like monosporidial cultures (haploid sporidias) were obtained by streaking of a wool-like monocolony on YePS medium after 48 h at 28°C (Figure 2b). White wool-like dikaryotic mycelium were produced in compatible crosses (that has been postulated to include different mating types), whereas in incompatible crosses (that has been postulated to include the same mating type), the colonies survived as yeast like at the point where two monosporidias cross on YePS medium after 36 h at 28°C (Figure 2c). PCR analysis of the 90 samples by S. scitaminea specific primer pair SL and SR revealed a fragment with expected size of 530 bp, which is present in all the tested samples. Amplified electrophoresis of representative samples is shown in Figure 2d.

ISSR polymorphism analysis in the genetic diversity of mating-type isolates of S. scitamineum
Based on the preliminary results of amplification, 15 ISSR primers (Table 2) were selected for further study of the 80 arbitrarily designed ISSR primers. The selected primers generated clear bands with good polymorphisms in the ISSR analysis of S. scitamineum (90 mating-type isolates). One representative profile (ISSR891) is shown in Figure 3. The number of bands and the degree of polymorphism revealed by each primer are given in Table 2. A total of 162 ISSR bands were generated, of which 115 were polymorphic among the 90 mating-type isolates. Ploymorphic rate of each primer ranged from 46.2 to 92.3%, with an average of 71.0% and the sizes of bands varied from 200 to 3500 bp. The number of ISSR bands generated by each primer was in the range of 2 (ISSR815) to 16 (ISSR890) with an average of 10.8. Among  the  primers   used   in   this   study,   the   primer ISSR890 generated most bands with 14 polymorphic bands, while the primers ISSR815 and ISSR113 produced only 1 and 3 polymorphic bands, respectively. Overall, the PIC value of these 15 ISSR primers ranged from 0.12 to 0.92 with an average of 0.82. Primer ISSR890 was the most discriminatory with a PIC value of 0.92, whereas ISSR815 had the lowest PIC value of 0.12. 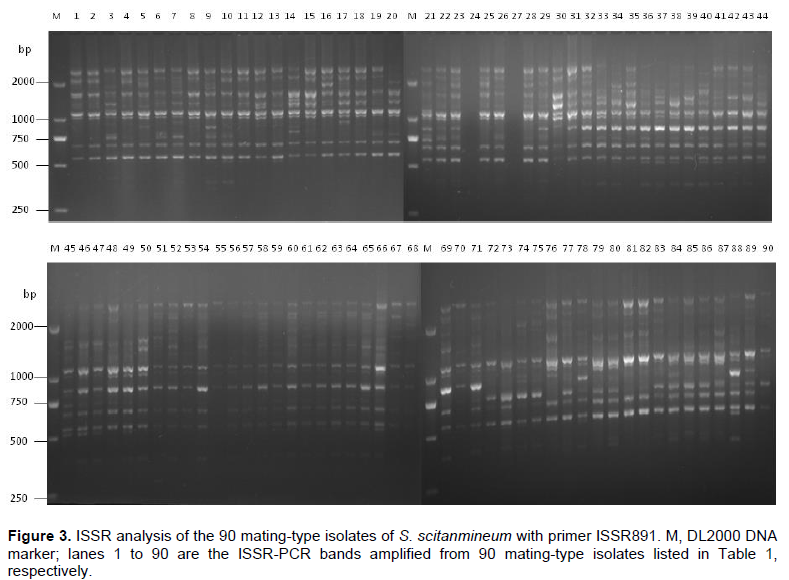 Genetic similarity
Based on the ISSR amplification data, the Jaccard’s genetic similarity coefficients between these 90 S. scitamineum isolates were calculated, and their values varied from 0.52 to 0.98 with an average of 0.75. The genetic similarity coefficients among the vast majority of isolates ranged from 0.76 to 0.95. In general, the genetic similarity among these isolates was higher, while the genetic diversity was moderate. The most genetic similarity (0.98) was found in the isolates number 39 and 40, both of which were isolated from different plants of the same sugarcane cultivar ROC22 at the same geographic location (Tianyang county of Guangxi province), whereas the most dissimilarity (0.52) was observed between the isolates numbers 69 and 87, both of which were isolated from sugarcane cultivar ROC22 at different geographic locations, the isolate number 69 was collected from Liucheng county of Guangxi province (located in North Guangxi, belonging to low altitude frost region) (Figure 1 and Table 1), while the isolate number 87 was isolated from Honghe county of Yunnan province (located in Southeast Yunnan, belonging to high altitude region) (Figure 1 and Table 1).
UPGMA dendrogram analysis
According  to  the  ISSR  data  set,  a   dendrogram   was generated for these 90 S. scitamineum isolates by UPGMA clustering analysis (Figure 4). The 90 mating-type isolates of S. scitamineum were divided into two main groups (G1 and G2) based on the Jaccard`s similarity coefficient of 0.69 (Figure 4). Among these 90 isolates, 46 (51.1%) were grouped in group 1 (G1), which includes all 10 isolates collected from Leizhou, Guangdong, all 8 isolates from Hepu, Guangxi, and most of the isolates from Hainan (eight of all 11 isolates) and Yunnan (12 of all 16 isolates), together with 6 isolates from Guangxi (3 isolates from Yizhou, 2 isolates from Liucheng and 1 from Longan) and 2 from Wengyuan county of Guangdong province, while 44 isolates (48.9%) were grouped into group 2 (G2), including most Guangxi isolates (31 of all 45 isolates), a small number of isolates from Guangdong (4 isolates), Yunnan (4 isolates) and Hainan (3 isolates), together with all two isolates collected from Jiangxi. It was also observed that isolates from the same sugarcane-growing areas are usually clustered together, for example, isolates numbers 36 to 44 collected from Tianyang county of Guangxi province, isolates numbers 1 to 7 collected from Leizhou county of Guangdong province, isolates numbers 61 to 65 collected from Nanning, Guangxi, and so on (Figure 4). 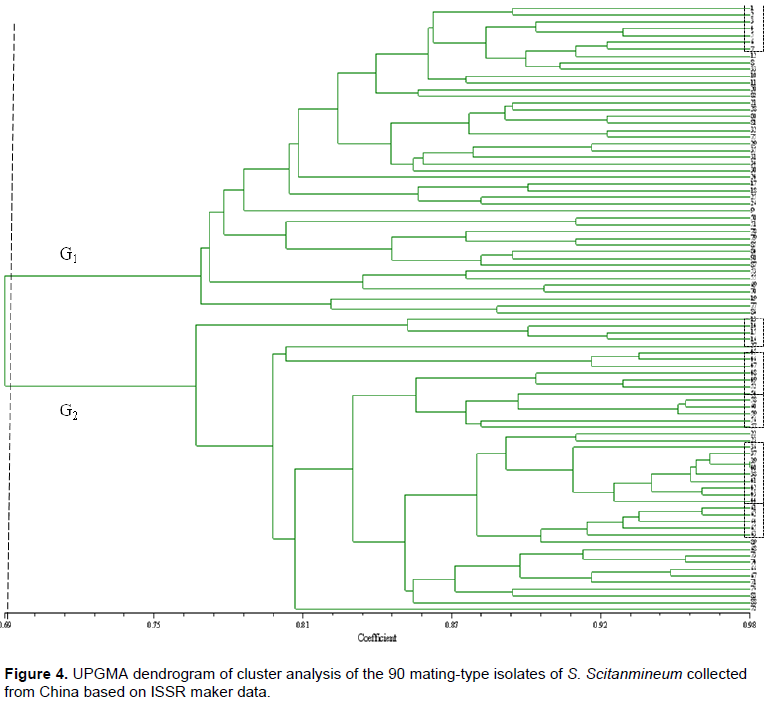 Principal component analysis
Principal component analysis (PCA) of these 90 S. scitamineum isolates was performed based on ISSR data set (Figure 5). Amongst these 90 isolates, 87 were grouped into two groups (A and B), except for three isolates, numbers 13, 14 and 16, which were collected from Wengyuan county of Guangdong province. The group A contained 45 isolates, which are 11 from Guangdong, 8 from Hainan, 12 from Yunnan and 14 from Guangxi. Group B was composed of 42 isolates, of which 31 are from Guangxi, 4 from Yunnan, 2 from Jiangxi, 3 from Hainan and 2 from Guangdong. As compared to the results of UPGMA analysis, all 45 isolates in the group A were also included in the cluster G1 of UPGMA, while 41 out of 42 in the group B were also included in the cluster G2 of UPGMA, indicating that the results of PCA plot was similar to the results of UPGMA dendrogram. 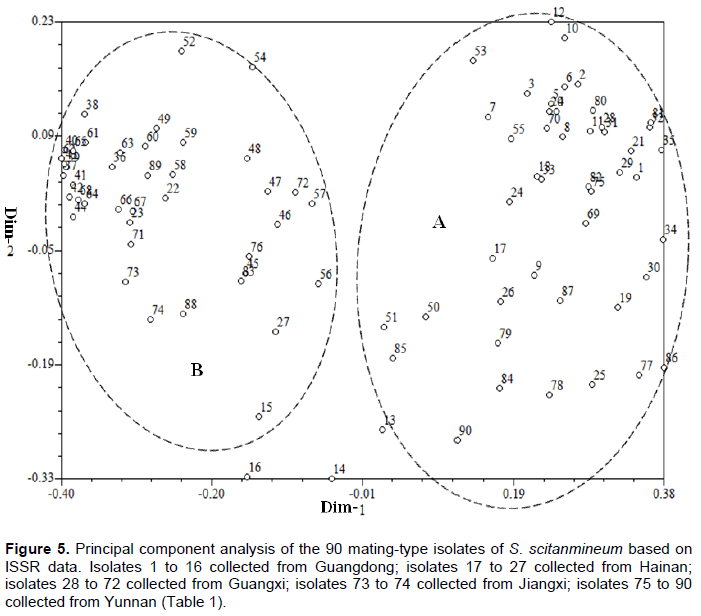