Ginseng plants associated with a number of fungi, several of which are reported to protect it from pathogens, thus improving plant growth. This study aimed to screen Panax ginseng leaves for endophytic fungi and to assess these fungi for their efficacy to inhibit ginseng black spot disease caused by Alternaria panax. A total of 256 endophytic fungal isolates were obtained from P. ginseng leaves. Most of the fungal isolates belonged to Chaetomium, Nemania, Xylaria, Nodulisporium and Alternaria; the others were not identified. One isolate Chaetomium globosum (FS-01), inhibited on A. panax causes black spot disease of ginseng, suggesting that FS-01 can be a potential biocontrol resource for control of ginseng black spot diseases. This is the first report on C. globosum, an endophytic fungus as biocontrol agent for ginseng black spot.

Endophytic fungi are defined as fungi that spend all or part of their life cycle within plant tissues or organs. Some fungal endophytes do not cause any harm to their host plants, and they are commensals or mutualists (Hyde and Soytong, 2008; Rodriguez et al., 2009). The mutualist fungal endophytes play an important role in improving plant growth and protecting plants against pathogens (Backman and Sikora, 2008; Kumar and Kaushik, 2013). Endophytic fungi as a biological control have received much attention in the past 20 years (Bacon et al., 2001; Porras-Alfaro and Bayman, 2011).
Black spot disease caused by Alternaria panax is one of the most severe diseases of ginseng; it seriously affects the yield and quality of this crop (Sun et al., 2017).
Currently, chemical fungicides are used to control this disease. However, spraying leave pesticide residues in the ginseng plants. Biological control using endophytic fungi has been investigated in recent years as an alternative to pesticide control (Park et al., 2017).
About 25% of crops worldwide are infected by plant pathogens each year according to the FAO (Schmale and Munkvold, 2009). Chemical pesticides are widely used to control plant diseases caused by fungi. Biological control for plant diseases is an alternative. Mutualist endophytic fungi live in plants, but do not cause harm to the host. Some control diseases by improving the resistance of the plant (Schulz et al., 2002; Silva et al., 2006; Strobel, 2006). Some  endophytic  fungi  can  secrete  biologically active substances, which enhance the host plants’ resistance to pathogenic infections (Katoch and Pull, 2017).
In this study, fungi isolated from the leaves of healthy ginseng were screened for their antagonistic ability toward A. panax, the causative agent of ginseng black spot disease.

Isolation
Asymptomatic leaves were collected from 15-year-old-healthy ginseng from a forest in Fusong county, Jilin province, latitude 41°42′N and longitude 127°01′E. The leaves were surface-sterilized according to the Kusari’s protocol (Kusari et al., 2013). In brief, leaves were washed using distilled water, followed by treatment with bleach for 3 min which is buffer and 0.1% mercury for 1 min and then rinsed in sterile distilled water three times. The water from the final wash was collected and plated onto PDA to confirm that the surface sterilization was sufficient to remove surface contaminants. The surface sterilized leaves were cut into 4 to 5 pieces (5×5 mm2) and plated on potato dextrose agar (PDA) containing 100 μl/ml streptomycin. The samples were incubated at 25°C in an incubator. During hyphal growth, hyphal tips were picked with a sterilized inoculation needle and transferred onto PDA plates. Subcultures were maintained at 4°C (Tejesvi et al., 2011).
Ginseng pathogens
An A. panax Whetzel (1912) culture was obtained from the Plant Pathology Laboratory of Jilin Agricultural University (Accession No. JL910032). Subcultures were maintained on PDA plates at 25°C.
Pathogenicity test experiments were conducted to ensure that the endophytic fungi were nonpathogenic on ginseng (Arnold, 2007).
Screening experiment in vitro
The inhibitory effects of the isolated fungal strains on A. panax were assessed through a procedure using the dual_culture method (Dasari et al., 2011). The interaction of the strains with the mycelial growth of A. panax was observed under the microscope.
Morphological identification
The morphological characteristics of Strain FS-01 were observed after incubation on PDA at 25°C for seven days, and identified using light microscopy according to the morphological characteristics of its colony and spores.
18S rDNA sequence analysis
The 18S rDNA sequence was amplified using polymerase chain reaction (PCR), which were amplified using the fungal universal primers ITS1 (5’-TCCGTAGGTG-AACCTGCGG-3’) and ITS4 (5’-TCCTCCGCTTATTGATATGC-3’) (White et al., 1990). Amplified PCR products were cloned and sequenced according to the Pan’s protocol (Pan, 2013), and nucleic acid identified was determined using NCBI BLAST (http://www.ncbi.nlm.nih.gov).
Greenhouse experiment
This experiment was conducted in the greenhouse (16 h of sunlight at 14 to 28°C, relative humidity 70-80%) with flower pots [30 cm (diameter) × 20 cm (height)] filled with 3000 g of soil matrix. Chaetomium globosum was applied at 1×106 mL-1 spore suspension to the five leaves per plant, a total of 10 ginseng plants, with three replications. The leaves of ginseng were inoculated with suspensions of the FS-01 strain with addition of 0.02% Tween 80 using a watering can, 1 day before the A. panax. Subsequently, suspensions of the A. panax and the FS-01 strain were prepared with sterile distilled water using sterile loops. The conidial concentration used for A. panax was 1×105 conidia/ml, whereas for the FS-01 strain a 1×106 conidia/ml was prepared. Control plants were inoculated with the A. panax using a watering can, negative control plants were inoculated with sterile distilled water. All plants were incubated under temperature maintained at 25±2°C in a greenhouse for 25 days. Disease index and control efficiency were calculated with the following formulas:
Disease index (%) = ∑(number of infected plants × group) / (total plant number × highest group) × 100
Control efficacy (%) = Disease index of control - Disease index of treated group/disease index of control × 100.

Screening of antagonistic strains against ginseng black rot pathogens
A total of 256 fungal cultures were isolated through two rounds of leaf sample screening, according to the morphological characteristics of the colonies. Five of these showed prominent antagonistic activities against A. panax in vitro (Table 1). Strain FS-01 had an 11 cm of inhibition zone against A. panax in the dual-culture test (Table 1), which was the largest inhibitory activity among the isolates. FS-01 caused morphological changes to the mycelia of A. panax that could be characterized as being degraded (Figure 1A) or twined (Figure 1B) under microscope.
Morphological identification of endophytic fungi
The colonies of isolate FS-01 were compact, gray on PDA medium but later became yellowish green in the following days (Figure 2A). Isolate FS-01 was identified as a member of the Chaetomiaceae family according to its morphological characteristics of the colonies. The ascocarp of isolate FS-01 was spherical or oval, ascus stick or handle shape, ascospores brown, lemon, thick-walled, bulging at both ends, with one tremata on the top (Figure 2B). 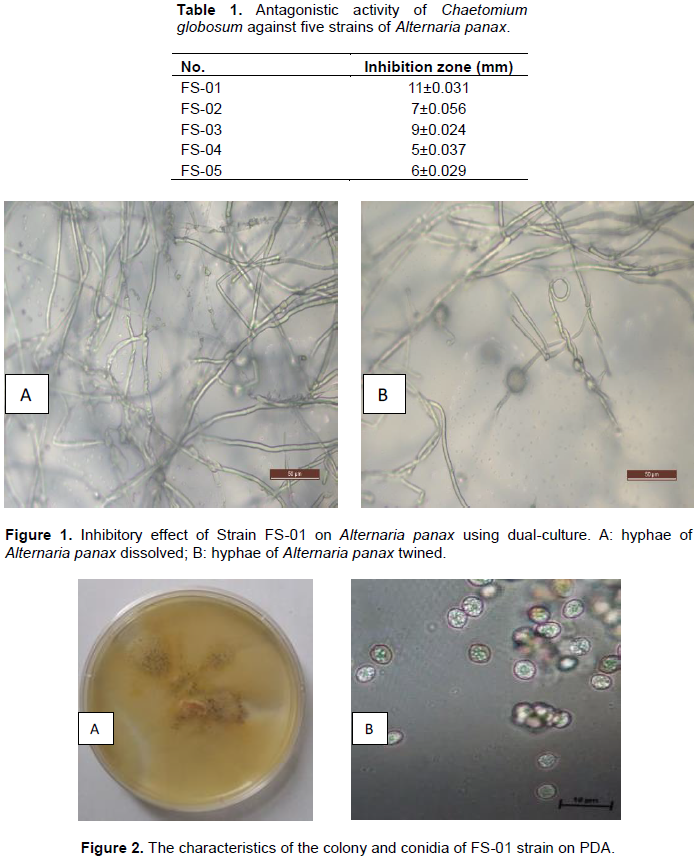 Identification of 18S rDNA sequence
PCR products of 578-bp were obtained from amplification of the 18S rDNA of the genomic DNA of strain FS-01. Sequence analysis showed that strain FS-01 shared 99% identity with a number of C. globosum in the NCBI database (Accession No. KX421415.1). Phylogenetic dendrogram was constructed by using 18S rDNA sequences, and it clearly showed that strain FS-01 clustered with members of the genus Chaetomium (Figure 3). Strain FS-01 was identified as C. globosum based on the results of the 18S rDNA sequence analysis and the morphological characterization.
Greenhouse experiment
The results of the greenhouse inoculation experiment showed that disease index of plants inoculated with strain FS-01 was 41.9 lower than that of control, indicating that it had control over ginseng black spot disease (Table 2). 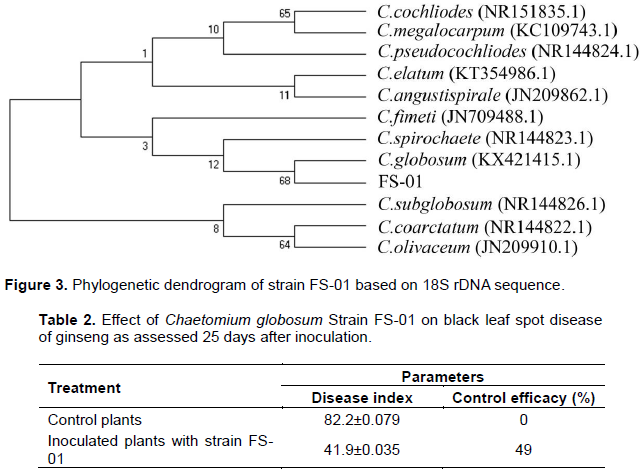 Endophytic fungi living in host plants are valuable natural resources that can be exploited as biocontrol agents because of their beneficial effects on host plant growth (Li et al., 2012). They can induce phytochemical production and defense resistance against pathogens (Zhang et al., 2014). Therefore, the biocontrol agents of C. globosum isolated from gingseng leaves were investigated.
C. globosum is a fungus that belongs to the Ascomycota, Pyrenomyetes Phylum, Sordariales Order, Chaetomiaceae Family, Chaetomium Genus (Kirk et al., 2008). In recent years, some Chaetomium were shown to strongly inhibit black pepper mould, gray mold of strawberry, wilt of tomato, basal rot of corn, and tan spot in wheat (Soytong et al., 2001; Istifadah and McGee, 2006). C. globosum was the most reported biocontrol fungus, which has strong inhibitory effects toward Venturia inaequalis, Fusarium oxysporum, and Setosphaeria turcica (Cullen and Andrews, 1984; Walther and Gindrat, 1988). C. globosum have been exploited as biocontrol agents with various mechanisms including mycoparasitism, antibiosis, induced resistance, and competition for nutrients (Park et al., 1988). However, here we present the first report of C. globosum as a biocontrol agent for ginseng black spot.
This study was conducted to screen biocontrol efficacy of the endophytic fungi from healthy leaves of ginseng for the control of ginseng black spot disease. The FS-01 strain had obvious inhibition on the incidence and reduction of severity of ginseng black spot. It was speculated from these results that FS-01 strain reduced diseases by producing some antifungal substances, but this will require additional work to demonstrate. Therefore, FS-01 strain has potentials to serve as a biocontrol agent.