Development of a sweet whey-based medium for culture of Lactobacillus

In this study, the potential use of sweet whey as a base medium for lactic acid bacteria culture and its effect on the technological characteristics of lactobacilli was evaluated. Bacteria were grown on raw or deproteinized whey supplemented with different amounts of yeast extract and/or tomato juice. Results obtained showed that biomass production on whey supplemented with yeast extract was higher than those observed with tomato juice. Whilst, supplementation by either whey, tomato juice or yeast extract increased significantly the growth of both lactic acid bacteria, the performance was in the same range as that on a modified MRS medium. Additionally, acidification and proteolytic activities resulting from control and modified MRS medium were of comparable values. The present investigation demonstrates that sweet whey can be used as an alternative substrate for lactic acid bacteria cultural purposes and provide opportunity to make a new growth medium with low cost.

Many sub-products of food industry that are released into the environment are a source of pollution. Among these, we are interested in whey from dairy industry. This sub-product is still poured in large quantities, simply in rivers and sewers. Because of its biochemical composition (lactose, proteins, vitamins), whey is an excellent culture medium for microorganisms and thus is a great source of pollution (Boudjema et al., 2009). In order to promote these high  tonnages  whey,  we  are  interested  in  using sweet whey as a culture medium for lactic acid bacteria (LAB).
Indeed, LAB are demanding nutritionally (Desmazeaud, 1983), and culture media have to be supplemented with various peptide sources and growth factors (Pritchard and Coolbear, 1993; John et al., 2007). Rich and complex media, like MRS (De Man et al., 1960) or M17 (Terzaghi and Sandine, 1975) are available and especially suitable  for  the culture  of  LAB:  they  contain complex nitrogen supplementation, like peptones, yeast extract and meat extract, supplying LAB growth with peptidic nitrogen and growth factors. But, their use is limited to specific uses because of their high costs. This is why many researchers are interested in optimization of culture media for LAB by adding different sources of nitrogen like ram horn (Kurbanoglu, 2004), corn steep liquor (Cornelius et al., 1996; Marcela et al., 2016), whey protein hydrolysates (Mc Comas and Gilliland, 2003; Watanabe et al., 2004), malt sprout extract, casein hydrolysates (Vahvaselkä and Linko, 1987; Chiarini et al., 1992; HoráÄková, 2014), baker’s yeast cells (Altaf et al., 2007), vegetal substrates (Gardner et al., 2001; Nancib et al., 2001; Charalampopoulos et al., 2002; Djeghri-Hocine et al., 2006; Djeghri-Hocine et al., 2007a), sugarcane juice (Preeti et al., 2016), Palmyra palm jaggery (Reddy Tadi et al., 2017), and de-lipidated egg yolk (Djeghri-Hocine et al., 2007b). The most efficient nitrogen source seems to be yeast extract (Aeschlimann and Von Stokar, 1990; Arasaratnam et al., 1996; Göksungur and GÅ±venç, 1997; Guha et al., 2013; Vethakanraj et al., 2013). But this is costly in industrial production. Therefore, attempts have been made to replace the yeast extract (Baralle and Borzani, 1988; Amrane and Prigent, 1993; Amrane, 2000; Gaudreau et al., 2005; Timbuntam et al., 2006).
Furthermore, other interesting constituents for the growth of bacteria and especially Lactobacillus genus that was studied, is the tomato juice, rich in simple sugars, minerals and vitamins. It stimulates growth, increases bacterial biomass, with shorter generation time and improves production of acid in medium (Gibson and Abdel-Malek, 1945; Miller and Puhan, 1980; Babu et al., 1992).
In our work, we investigated the possibility of valorization of sweet whey as culture medium for lactic acid bacteria belonging to Lactobacillus genus.

Bacterial strains
The following strains used in this work belong to the collection of the Laboratory of Biology of Microorganisms and Biotechnology, University of Oran 1 Ahmed Ben Bella, Algeria: Lactobacillus plantarum BH14; Lactobacillus casei CHTD27, Lactobacillus sp. CHM11 isolated from raw camel milk, Lactobacillus sp. V8 and V14 isolated from fresh ovin meat and Lactobacillus sp. LVK9, LVK11, LVK12 isolated from cow’s raw milk.
Media
Culture medium used was upon sweet whey, from local manufacturing plant soft cheeses (camembert) and tomato juice (TJ). Whey was deproteinized by heating in a water bath at 100°C for 30 min, then centrifuged at 5000 rpm for 15 min. The supernatant was filtered through a standard paper filter (DURIEUX, ref: 66301130). The  same  procedure,  except  the  heat  treatment was performed on the tomato after scraping (Boudjema et al., 2009).
Deproteinized whey was then supplemented with various concentrations of yeast extract (YE) and/or fresh tomato juice (pH is adjusted to 5.7 with 5N NaOH or 5N HCl) supplemented with 0.1 g of magnesium sulfate and 0.05 g of manganese sulphate. The whole was autoclaved at 120°C for 15 min.
Culture
After incubation for 24 h at 30°C, bacterial growth was measured by turbidimetry at a wavelength of 600 nm and a microbial count on MRS solid medium (results are expressed as U.F.C / ml).
Measuring the acidity produced
Measurement of the acidity produced by the bacterial strains was done by Dornic titration as described by Karam and Karam (1994).
Detection of cellular proteolytic activity
Proteolytic activity was sought in a solid medium on a Petri dish buffered to pH 7 with phosphate buffer (KH2PO4 / Na2HPO4 0.1 M) supplemented with 1% sterile reconstituted skim milk at 10%. According to the method described by Van den Berg et al. (1993), bacterial strains tested were seeded simultaneously on the surface of culture medium using multipoint inoculator. After incubation at 30°C for 48 h, proteolytic activity was revealed by the appearance of a clear halo around each bacterial colony. The dimension of this halo was later measured.

Optimization of culture medium
WY growth medium (Whey + yeast extract)
Results obtained clearly show that biomass production was improved by the non-supplemented whey (Figure 1). L. casei CHTD27 biomass was proportional to the amount of yeast extract added until concentrations above 8%, and then stabilized. For L. plantarum BH14, biomass continues to increase up to 10% of yeast extract. There are differences in biomass between the two strains for the same yeast extract concentration; this is probably due to the strain effect. 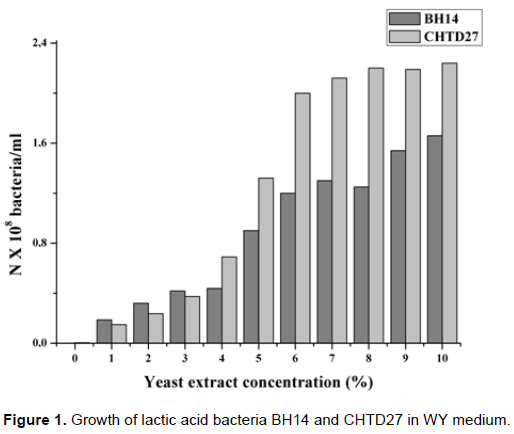 The stimulant effect of YE on bacterial growth was often reported (Baralle and Borzani, 1988; Amrane and Prigent, 1993; Champagne et al., 1999; Nancib et al., 2005; Djeghri-Hocine et al., 2007b). However, Boudjema et al. (2009) and Ghaly et al. (2003) reported that at high concentrations of YE, the cell concentration decreases, under the effect of a high toxicity of YE.
From the viewpoint of medium cost, the use of a culture medium with such concentrations of YE is not profitable. For this reason we have substituted yeast extract by the tomato juice.
WT growth medium (Whey + tomato juice)
Figure 2 shows the results obtained. The addition of tomato juice to increase concentrations stimulates bacterial biomass proportionally, except for the strain L. plantarum BH14 where we recorded maximum growth in the presence of 35% (v / v) tomato juice (WT7 medium). A decrease in biomass was observed with higher quan-tities of tomato juice (WT 8, WT 9 and WT 10 medium). 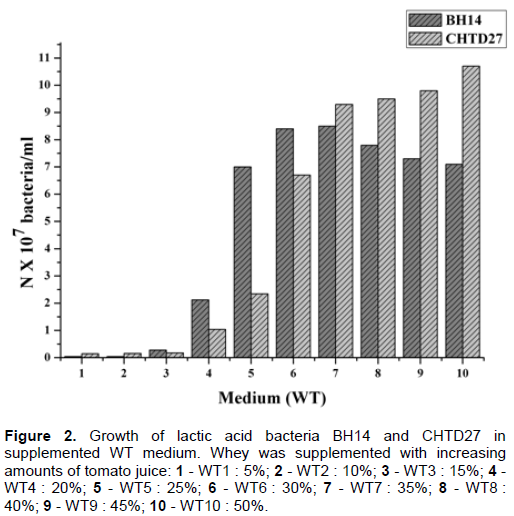 This could be explained by the reduction of activity of β-galactosidase because of the high concentration of acids found in tomato juice.
Also, Inagawa et al. (1987) showed that phytic acid found in the corn syrup at a concentration of 4.4% reduces the activity of β-galactosidase in vivo, and therefore assimilation of lactose by bacteria.
Small biomass differences between the two strains were observed for the same concentration of tomato juice. Our observations agree well with the work of Babu et al. (1992) which showed that the addition of tomato juice in the skimmed milk stimulates the growth of lactobacilli.
However, the amount of biomass produced in a medium enriched with the tomato juice is significantly lower than that obtained with YE, which is probably due to a source of nitrogen deficiency in the tomato juice.
To overcome these limitations, and in order to obtain good productivity of biomass, we performed bacterial growth assays in a whey-based medium containing the two supplements (yeast extract and tomato juice).
WT growth medium (Whey + tomato juice+ yeast extract)
From results obtained previously, we chose the medium WT6 containing 30% tomato juice, because beyond this concentration the medium becomes cloudy, which influences the spectrophotometric reading.
In addition, we limited ourselves to a maximum concentration of 1% YE, because there was a good biomass production at this concentration. Amrane (2000) worked on the production of lactic acid by Lactobacillus helveticus cultured in the supplemented whey by YE and concluded that the concentrations of yeast extract greater than 20 g/L become toxic to the microorganism. Similarly, Ghaly et al. (2003) reported that at high concentrations of yeast extract, the cell concentration decreases as a result of the high toxicity of yeast extract. Bouguettoucha et al. (2007), Kulozik and Wilde (1999), Amrane and Prigent (1997), who worked on a milk free thermophilic bacterium L. helveticus and Norton et al. (1994), Schepers et al. (2006) and Sirisansaneeyakul et al. (2007), who have worked respectively on thermophilic lactic bacteria immobilized Lactobacillus lactis IO1, L. helveticus found that 10 g/L yeast extract was the optimal concentration for these strains, so they can give good growth and production of lactic acid.
All previous results led us to retain WT6 medium at which we have added 1% yeast extract: the so-called BMK medium was chosen for remain study. Figure 3 shows the results obtained. We noticed that all tested strains grew in BMK medium to the  extent   that   we   achieved  important  cell  densities indicating that it was favourable. The second observation was that growth was also a function of the  strain. Indeed, we can distinguish three categories of strains according to their growth in that environment: those whose growth was much larger in the MRSm medium than BMK medium, those with almost identical growth in both media and those whose growth was higher in the BMK medium than MRSm medium. 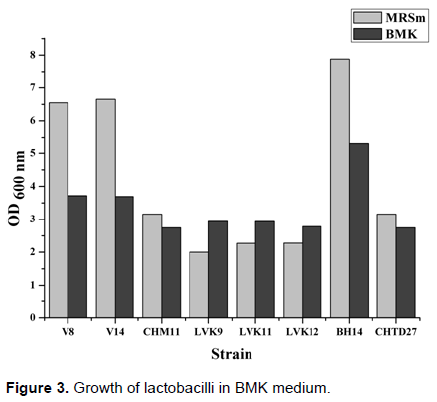 All these observations indicate that BMK medium can be used to grow lactic acid bacteria and we wanted to examine whether the main technological characteristics of these bacteria were expressed in these trophic conditions.
Technological characteristics of lactobacilli grown in BMK medium
Production of lactic acid
On BMK medium, the strain CHTD27 gives an amount of lactic acid almost equivalent to that produced on MRSm medium (5 and 5.5 g/L respectively), but a very significant difference is observed for BH14 strain wherein the amount of lactic acid produced in MRSm is double that produced in BMK medium (Figure 4). Differences were also observed for the same medium depending on the strain. 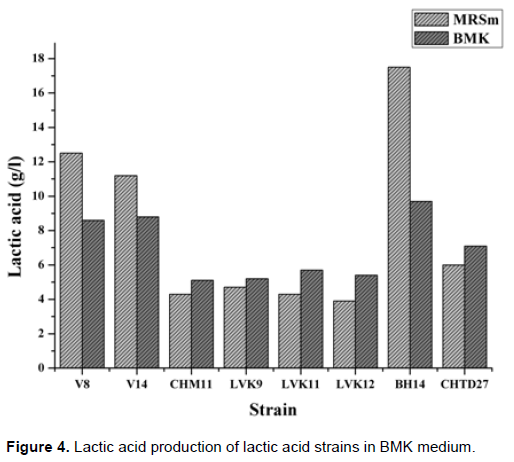 These results are consistent with observations reported by  several  authors  on  the  effect  of  yeast  extract  and differences in acidifying power of strains. Amrane and Prigent (1999), Kulozik and Wilde (1999) and Sherpers et al. (2006) showed that for a full use of the lactose, it is essential to supplement whey with nitrogen sources. According to Zhang et al. (2007), the addition of yeast extract to deproteinized whey has greatly increased not only the rate of acidification by Lactobacillus bulgaricus 11842 but also the activity of β-galactosidase. This activation leads to degradation of lactose and a good uptake of glucose which results in a good growth.
Proteolytic activity of the lactic acid bacterial strains
Results obtained (Figures 5, 6 and 7) show unequivocally that proteolytic activity observed is manifested in the same way in the two culture media tested. The result, (h/c) [h: diameter of the clear halo (mm); c: diameter of the colony (mm)] is substantially identical in the two culture media. 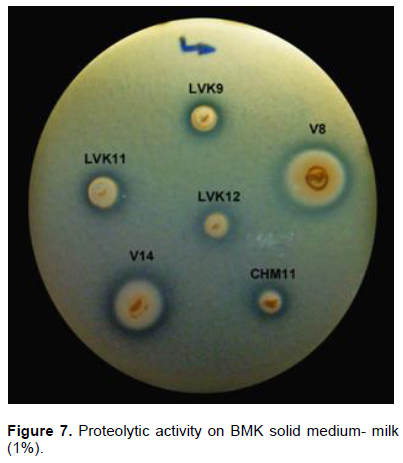 Our culture tests on deproteinized whey showed that it is too poor to the needs of lactobacilli. Its optimization through the addition of yeast extract and/or tomato juice led to the development of an ''inexpensive''  media for the growth of certain Lactobacilli in a similar way to that obtained in MRS medium. In addition, the results show that on BMK medium [whey supplemented with a  mixture of tomato juice and yeast extract (at concentrations of 30 and 1%, respectively)], the biomass obtained is comparable to that observed in MRS medium.