Contamination of soil with heavy metals is one of the major environmental problems in many countries that reach from many sources as power stations, application of metal pesticides, fertilizers, and sewage sludge. In this study, ten Rhizobium leguminosarum bv. viciae isolates were collected from different governorates in Egypt (Menoufia, Kafr El-Sheikh, Qalubia, Fayoum, Ismailia, Sharkya, Dakhalia, Behira and North Sinai) to evaluate their resistance to three heavy metals (Cu, Zn and Pb). The results showed that the isolates of RL3 and RL6 exhibited the best resistance toward the heavy metals tested. PCR based specific primers were used to screen the tested isolates for detection of some heavy metal resistant genes (copA, pbrA and czcD). The Pb-resistant gene pbrA was detected in most of tested isolates except RL7 and RL9 isolates, while, the Cu-resistant gene copA was found in all isolates except RL1, RL2, RL4 and RL8 isolates; however, the Zn-resistant gene czcD was detected only in the RL9 isolate. SDS-PAGE analysis was used to study the protein banding patterns for some tested isolates under lead stress and compared them with their untreated control.

Rhizobia are Gram-negative soil bacteria with high agronomic significance due to their ability to establish nitrogen-fixing symbiosis with leguminous plants through invading their roots and forming nodules for atmospheric nitrogen fixation (Stan et al., 2011). The symbiosis process can be affected by many environmental factors such as temperature, soil acidity and salinity (Dart, 1977; Gibson and Jordan, 1983; Sobti et al., 2015). Heavy metals soil contamination is among the factors  that  have negative effects on the growth of each rhizobium and plant. Nowadays, with increasing industrial activities, the use of industrial waste waters for irrigation and application of metal containing pesticides and fertilizers, the level of soil pollution with heavy metals is increased (Gopalakrishnan et al., 2014; Stan et al., 2011). Approximately 30% of the terrene environment is suggested to be degraded or contaminated and this surely can cause disaster problems for each environment and agricultural production (Alloway and Trevors, 2013; Valentín et al., 2013). The exposure to heavy metals is toxic not only for soil microorganisms but also for plants. It has been showed that with increasing concentrations of heavy metals such as Cu, Zn and Pb, the bacterial counts of Rhizobium sp. are reduced and also the expression of nod genes was varied (Stan et al,. 2011; Chaudri et al., 2008). On the contrast, it was suggested that Rhizobia can tolerate high heavy metal concentrations in different ways and may play a significant role in the restoration of contaminated soil (Carrasco et al., 2005; Teng et al., 2015). The symbiotic relationship between rhizobia and legumes reinforce elimination rate of pollutants (Glick, 2010). Hao et al. (2014) showed that rhizobia heavy metal tolerance mechanisms may include: (i) Adsorption and accumulation of heavy metals; and (ii) microbial secretion of enzymes and bioactive metabolites to increase their bioavailability and sequester their toxicity.
In this study, ten rhizobial isolates were collected from root nodules of broad bean (Vicia faba L.) plants representing different geographic sites in Egypt. The objectives of this study was to: (i) characterize these isolates by comparing their growth on medium supplemented with different concentrations of heavy metals (Cu, Pb and Zn); and (ii) screen the tested isolates for presence of heavy metal resistance genes using polymerase chain reaction (PCR) and to study the protein banding patterns under some heavy metal stress using sodium dodecylsulphate-polyacrylamide gel electrophoresis (SDS-PAGE).

Isolation of Rhizobia
Ten isolates of Rhizobium leguminosarum bv. Viciae (RLV) were collected from root nodules of V. faba L. plants representing several Egyptian governorates according to the methods described by Vincent, 1970. Table 1 shows the isolation sites and the name of the isolates. 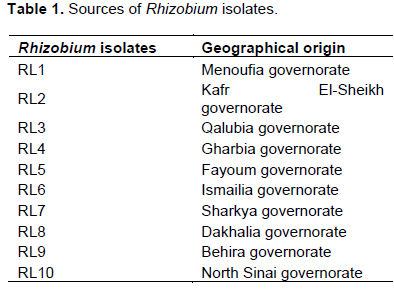 DNA extraction
Total genomic DNA was extracted from bacterial cultures grown in yeast extract mannitol media (YEM) as described by Shamseldin et al. (2009). The quality and quantity of DNA was characterized both spectrophotometrically and by 0.8% agarose gel. The DNA from all isolates produced clear sharp bands, indicating good quality of DNA.
Amplification of heavy metals resistant genes
The primers for the amplification of a Cu-resistance gene (pcoR) were pcoRf; 5-CAGGTCGTTACCTGCAGCAG-3(forward) and pcoRr; 5- CTCTGATCTCCAGGACATATC -3(reverse) (Trajanovska et al., 1997). Pb-resistant gene (pbrA) primers were pbrA1; 5-ATG AGCGAATGTGGC TCGAAG-3(forward) and pbrA2; 5-TCATCGACGC   AACAGCCTCAA-3(reverse)   (Borremans   et  al., 2001). Zn-resistant gene (czcD) primers were czcD1; 5-CAGGTC ACTGAC ACG ACC AT-3(forward) and czcD1; 5-CAT GCT GAT GAG ATT GAT GAT C-3(reverse) (Nies et al., 1989). PCRs were carried out in 25 µl reaction mixtures using the following conditions: Initial denaturation at 94°C for 10 min, followed by 35 cycles of 94°C for 1 min, 60°C for 1 min, and 3 min at 72°C.A final extension was done at 72°C for 7 min. PCR products were separated on 2% agarose gels at 100 V for 1 h in TBE buffer, stained with ethidium bromide, and photographed under UV light.
Evaluation of heavy metals tolerance
The RLV isolates were evaluated for their tolerance against three different heavy metals (Cu, Zn and Pb) by plating in YEMA medium. The stock solutions of heavy metals (mM) were added to sterile agar as follows: CuCl2.2H2O 0.5, 1 and 2; ZnSO4.7H2O0.5, 1 and 2; Pb(C2H3O2)2.3H2O 0.5, 1.0 and 2.The plates were inoculated with bacterial cells and the bacterial growth was evaluated after 7 days at 28°C (Ausili et al., 2002). Isolates were considered resistant if growth was observed or sensitive if otherwise.
Protein banding patterns of Rhizobial isolates
The cultures of tested isolates growing on Broth YEM medium and supplemented with 0.5 mM of Pb(C2H3O2)2.3H2O were pelleted and Sodium dodecyl sulfate- polyacrylamide gel electrophoresis (SDS-PAGE) was performed as described by Pereira et al. (2006). Gels were stained with Coomassie brilliant blue R-250 and photographed.

Detection of some heavy metal resistant genes
In this study, PCR based on heavy metal specific primers was used to screen and detect some heavy metal resistant genes in the tested isolates (copA, pbrA and czcD). The primers used for the amplification Pb-resistant gene pbrA yielded a band of approximately 500 bp in most of tested isolates except RL7 and RL9 (Figure 1A). For Cu-resistant gene copA, the PCR produced one band of approximately 650 bpin most of tested isolates except RL1, RL2, RL4 and RL8 (Figure 1B). This band is homologous to that obtained by Trajanovska et al. (1997).
On the other side, only one band of approximately 500 bp was detected in RL9 isolate with amplification of the Zn -resistant gene czcD (Figure 1C). It must be mentioned that microbes use heavy metal resistant genes to encode products that reduce or eliminate the toxicity of heavy metals for adaptation of the different environment stresses (Wei et al., 2009). From these genes, pbrA, which encodes a P-type Pb(II) efflux ATPase in the lead resistance operon that involved in uptake, efflux, and accumulation of Pb(II) (Borremans et al., 2001). In addition, CopA is essential gene in copper resistance operon and catalyzes the intake of copper (Wei et al., 2009). Moreover, the CzcDis necessary gene in Zn-resistant operon and mutation in this gene can disrupt level of Zn-resistance (Nies et al., 1989). 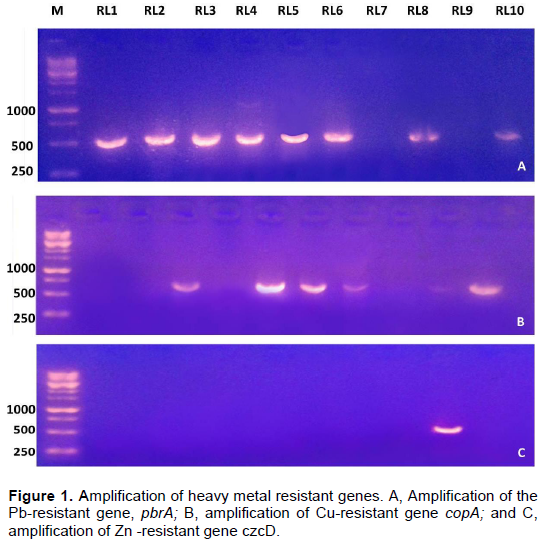 The appearance of resistance levels in isolates as RL 3 and R6 against some heavy metals as Pb is due to these isolates contain the pb-resistant gene pbrA (Figure 1A). On the other hand, the appearance of resistance levels in some isolates although their resistance genes did not detected by PCR is not understood. One of explanations is that these isolates were isolated from soil polluted with heavy metals and have probably adapted this environmental stress. This explanation is supported with previous literature shown that the selective pressure of metals on microorganisms can lead to microbial populations with a high resistance  to  metals  (Pereira  et al., 2006). Another explanation, these isolates may have other resistance mechanisms for removal of these elements (Wei et al., 2009; Teng et al., 2015).
Characterization of Rhizobium isolates by SDS-PAGE
The analysis of protein alterations seems to be a good indicator to estimate the level of stress imposed to Rhizobium populations (Pereira et al., 2006). Hence, SDS-PAGE analysis was used to study the protein banding patterns for some Rhizobium isolates under lead stress and compared them with their untreated control. The isolates RL2 and RL8 were selected as sensitive isolates, while the isolates RL3 and RL 6 were selected as resistant according to their growth under lead stress (Figure 2). In general, Rhizobium isolates showed similar banding patterns however some differences were detected as indicated in Figure 2. Comparative analysis of the lanes showed the  absence  of  two  protein  bands (about 25 and 40 kDa) in the sensitive isolate RL2 (treated and their control) compared to other isolates. 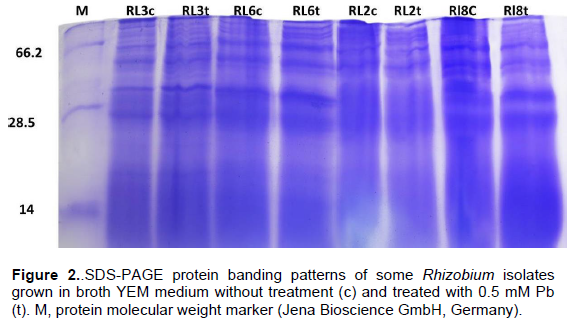