Azospirillum brasilense strains Ab-V5 and Ab-V6 have been broadly and successfully used in commercial inoculants in Brazil, for both non-legumes and legumes, contributing to increases in grain yields with reduced applications of chemical fertilizers. Azospirillum survival, however, may be very low in liquid inoculant formulations and strategies such as the enrichment with polyhydroxybutyrate (PHB) and biofilm may help both bacterial survival and agronomic performance. The production was quantified for both PHB and biofilm by strains Ab-V5 and Ab-V6 in liquid inoculant formulations. Differences were observed between formulations, strains, and strain x formulation. Cellular PHB concentrations ranged from 7.9 to 40.2% of the cell dry weight after 96 h, and considerable amounts of biofilm were synthesized by both Ab-V5 and Ab-V6. Maximum accumulation of PHB and biofilm occurred with A. brasilense strain Ab-V6 in the formulation FORM2+P3, indicating that it is possible to enrich the inoculants on PHB and biofilm by improving the culture media.  Field experiments will now be performed to confirm the agronomic efficiency of the improved inoculant.

Nitrogen (N) is the nutrient most required for plant growth, and agricultural production and productivity are directly related to its availability to crops. The majority of the Brazilian soils are poor in N, requiring an intense management of chemical N-fertilizers, but the country imports over 70% of the N needed for annual  production, resulting in high cost for the farmers (Hungria et al., 2013a). Although N-fertilizers can be easily assimilated by plants, they are also subject to severe losses by leaching and emission into gaseous forms, leading to water pollution, ozone-layer depletion and global warming (Hungria et al., 2013a; Sá et  al.,  2017).  In  this  context, the search for alternative biotechnological products, with an emphasis on microbial inoculants, aiming at the total or partial substitution of N-fertilizers, through innovative practices that are environmentally friendly but capable of maintaining high agronomic yields, has been a major goal of investigation (Hungria et al., 2005; Souza et al., 2015; O´Callaghan, 2016; Pereg et al., 2016; Mahanty et al., 2017).
Biological nitrogen fixation (BNF) represents a cheap and sustainable alternative to N-fertilizers and can be promoted by seed inoculation with elite diazotrophic bacteria, contributing to plant’s N nutrition (Hungria et al., 2005; Malusá et al., 2012; Ormeño-Orrillo et al., 2013). Although the main contribution of BNF is derived from the symbiosis of bacteria collectively known as rhizobia with legumes, other diazotrophic bacteria less specifically associated with plants, associative or endophytically and contributing to lower amounts of nitrogen can also be important to global saving of N-fertilizers (Bashan and de-Bashan, 2010; Ormeño-Orrillo et al., 2013; Pereg et al., 2016). Furthermore, many of these bacteria have addi-tional mechanisms such as the synthesis of phytohormones, induction of plant-stress tolerance and defense genes, among others (Bashan and de-Bashan, 2010; Fukami et al., 2017a, b), which may help to promote plant growth. Due to their multiple beneficial mechanisms, these bacteria have been classified as plant-growth-promoting bacteria (PGPB), and among them, those belonging to the Azospirillum brasilense species are the most studied and employed as inoculants worldwide, with consistent responses to inoculation in all continents, highly contributing to the economy of chemical fertilizers (Okon and Labandera-Gonzalez, 1994; Dobbelaere et al., 2001; Hartmann and Bashan, 2009; Bashan and de-Bashan, 2010; Hungria et al., 2010; Okon et al., 2015; Cassán and Diaz-Zorita, 2016; Pereg et al., 2016; Fukami et al., 2016, 2017a, b).
Liquid inoculants carrying PGPB are easy to handle and can be applied to seeds and by foliar spraying; however, in general, they provide inadequate protection to bacterial cells, leading to early cell death (Stephens and Rask, 2000; Hungria et al., 2005; Tittabutr et al., 2007; Bashan et al., 2014). The improvement of shelf life and maintenance of cell viability can be achieved with the addition of protective molecules such as polymers, which help to maintain water activity and serve as additional supply of carbon and energy to the bacteria (Mugnier and Jung, 1985; Okon and Itzigsohn, 1995; Hungria et al., 2005; Trujillo-Roldán et al., 2013).
Cell viability can also be improved by the synthesis of polyhydroxybutyrate (PHB), a reserve polymer that allows bacteria to withstand environmental stresses (Tal and Okon, 1985; Kadouri et al., 2003; Bhat and Subin, 2015). Kadouri et al. (2003) observed that the synthesis and use of PHB as carbon and energy sources by A. brasilense strain Sp7 favored the establishment of this bacterium and its survival in competitive environments under  stress conditions. Therefore, it is expected that the accumulation of PHB may favor cell longevity in inoculants. In addition to PHB, biofilm formation provides several benefits to the bacterial community, such as the improvement in bacterial cell-to-cell communication, tolerance of stressful environmental conditions, and host plant colonization (Morris and Monier, 2003; Kreft, 2004; Fukami et al., 2017a). Although studies about the application of biofilms for the benefit of agriculture are scarce, they could contribute to the success of inoculation, protecting bacterial cells from the competition with other soil microbial communities and improving BNF (Jayasinghearachchi and Seneviratne, 2004; Karivaradharajan et al., 2013; Fukami et al., 2017a).
In Brazil, the utilization of A. brasilense strains Ab-V5 and Ab-V6 for maize (Zea mays L.), wheat (Triticum aestivum L.), and brachiarias (Urochloa species), as well as for co-inoculation of soybean (Glycine max (L.) Merr.) and common bean (Phaseolus vulgaris L.) has exponentially grown since 2009 (Hungria et al., 2010, 2013b, 2015, 2016; Hungria, 2011; Marks et al., 2015; Fukami et al., 2016). The objective of this study was to evaluate the production of PHB and biofilm by these two strains of A. brasilense in new formulations of liquid inoculants.

Bacterial strains and growth conditions
The study was performed with A. brasilense strains Ab-V5 (=CNPSo 2083) and Ab-V6 (=CNPSo 2084) from the Diazotrophic and Plant Growth-Promoting Bacteria Culture Collection of Embrapa Soja (WFCC #1213, WDCM #1054). Both strains derived from a selection program for cereals (Hungria et al., 2010), and are currently employed for commercial production of Azospirillum inoculants in Brazil. The strains were grown in liquid media (FORM2+P3 and FORM4+P6) previously developed in our laboratory (Santos, 2017); the formulations are under registration.
Evaluation of cell dry weight and polyhydroxybutyrate
The strains were single cultured in 500 mL of the liquid formulations (FORM2+P3 and FORM4+P6) for 96 h, at 28±2°C, with agitation of 140 rpm. At 48, 72, and 96 h, 10 mL samples of each treatment were withdrawn and centrifuged at 7,690 g for 15 min at 4°C. The supernatant was discarded and the cell mass in the precipitated fraction was washed twice with 5 mL of saline solution (NaCl, 0.85%), followed by further centrifugation, and the supernatant was discarded. The samples were dried at 70°C until constant weight and weighed to determine the cell dry weight (CDW, g L-1) (Belal, 2013). The cells were re-suspended in 12 mL of sodium hypochlorite (NaClO, 5.25%) and incubated for 2 h at 40°C (Karr et al., 1983). The mixture was centrifuged at 2,370 g for 15 min at 4°C, and the supernatant discarded. The precipitated fraction was washed successively with 10 mL of distilled water and 96% ethanol (C2H6O) (Karr et al., 1983; Hawas et al., 2016). The material was oven dried at 70°C, 1 mL of concentrated sulfuric acid (H2SO4) was added, and maintained at 90°C for 30 min, followed by cooling. PHB concentration was obtained by determining the optical density OD235,  considering  sulfuric   acid   PA   as   the   blank   (Law   and Slepecky, 1960). The amount of PHB present in the sample is provided by the estimate of the crotonic acid (C4H6O2) derived from the reaction of the sample with sulfuric acid, using the extinction coefficient of the crotonic acid (1.55 × 104 M-1 cm-1). The experiment was performed with three biological replicates, each with three replicates, for each strain and formulation.
From the obtained values of CDW and the absolute PHB concentration of each sample, it was possible to estimate the relative PHB concentration (%), as follows:

Biofilm formation
Biofilm formation was evaluated after Christensen et al. (1985), with some modifications. The strains were single cultured in 100 mL of the liquid formulations (FORM2+P3 and FORM4+P6) and also in NFb medium (Döbereiner, 1991) for 24 h at 28±2°C, with agitation of 140 rpm. The cultures were then diluted to an OD600 of 0.2 and 100 μL of cell suspensions, and transferred to each well of polystyrene microplates with U-bottom (Deltalab S.L.), for each of the three culture media. Plates were incubated in a humid chamber at 28±2°C for 14 days. The culture medium was carefully removed from each well and the plates were dried at 60°C for 1 h, followed by three washes by immersion in 0.9% NaCl and dried at 60°C for 1 h. Next, 100 μL of 0.1% crystal violet (C25N3H30Cl. aqueous solution) were added per well and kept for 20 min. Plates were washed three times by immersion with distilled water. After drying for 1 h at 60°C, 100 μL of 96% ethanol were added to each well and the plates were allowed to stir gently until all the crystal violet was dissolved. Finally, the OD570 was determined. The experiment was performed with three biological replicates, each with three replicates, for each strain and formulation.
Statistical analysis
The experimental design was entirely randomized in 2 × 2 factorial, always with three biological replicates,  each  with  three  replicates.
The data were submitted to the analysis of homogeneity of variance and the means were compared by the Tukey’s test (p ≤ 0.05) using the STATISTICA 7.0 program.

Increases in CDW were observed during the 96 h of growth in both liquid formulations, FORM2+P3 and FORM4+P6, for both strains of A. brasilense, Ab-V5 and Ab-V6 (Figure 1). Differences were observed between the strains, being always higher with Ab-V6. Differences were also observed due to the interaction strain × formulation; growth of Ab-V5 was favored by the composition of FORM2+P3, especially in the first 72 h, while for Ab-V6 the CDW at 72 and 96 h was considerably higher in FORM4+6 (Figure 1). 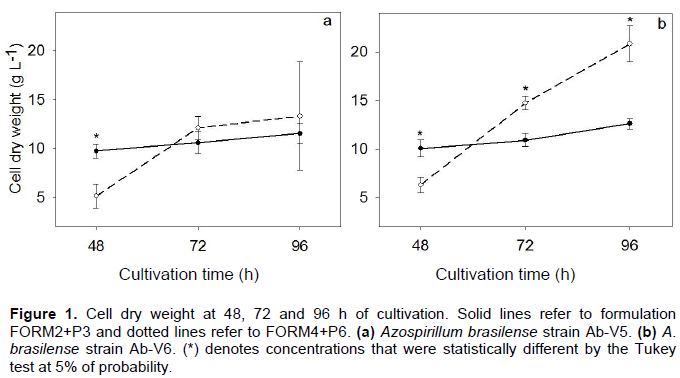 The production of PHB ranged from 2.13 to 5.07 g L-1 in FORM2+P3 and from 1.16 to 1.76 g L-1 in FORM4+P6, being always higher in the first formulation (Figure 2). Differences between strains were also observed, being always higher in Ab-V6 than in Ab-V5 when grown in FORM2+P3, but with similar and considerably lower accumulation when both strains were grown in FORM4+P6 (Figure 2). 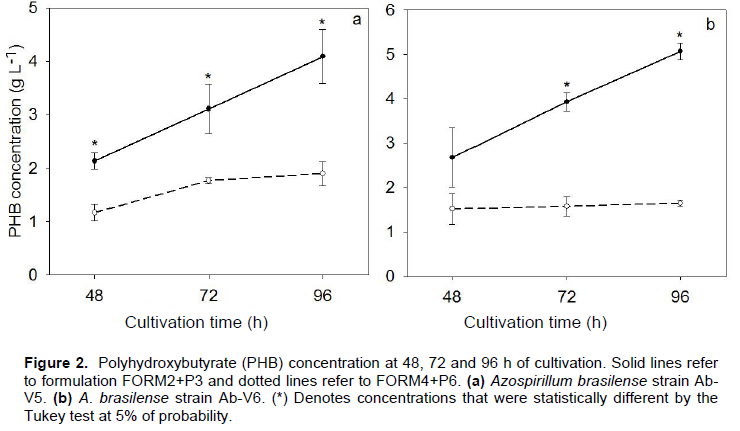 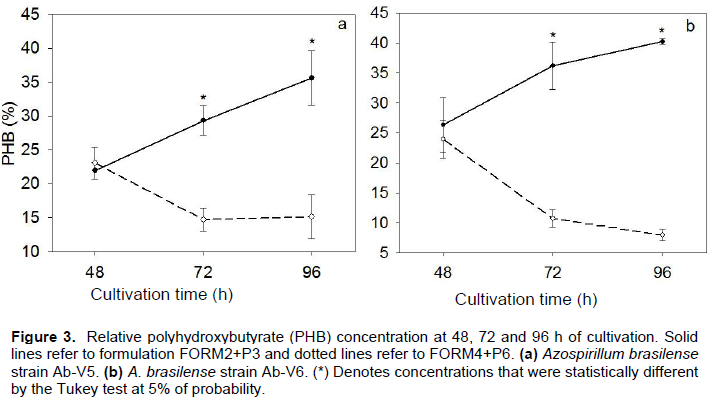 Inoculants carrying A. brasilense strains Ab-V5 and Ab-V6 have been exponentially commercialized in Brazil and other South American countries for both non-legume and legume crops (Hungria et al., 2010, 2013b, 2015, 2016; Hungria, 2011; Marks et al., 2015; Fukami et al., 2016). However, the successful performance of the bacteria relies on their survival under stressing conditions and on an adequate colonization of roots, and PHB accumulation and biofilm formation are keys for the achievement of both processes. Therefore, inoculants enriched with PHB and biofilm are of agronomic interest. In this study, the production of PHB and biofilm by two strains of A. brasilense in new formulations of liquid inoculants was evaluated, and the maximum accumulation of PHB and biofilm with A. brasilense strain Ab-V6 in the formulation FORM2+P3 was identified. Field experiments will now be performed to confirm the agronomic efficiency of this inoculant.