Biochemical profile of cuttings used for in vitro organogenesis of Prunus africana: An endangered species in Cameroon

Prunus africana (Kanda stick) is a valuable medicinal tree classified as priority species for domestication in Cameroon. To measure the ability for developing axillary buds and multiple shoots in relation with the origin and state of explants, some biochemical parameters were assessed in eight types of single-node cuttings. These cuttings were treated with different concentrations of kinetin (kin) indole butyric acid (IBA) and thidiazuron (TDZ) and cultured in Murashige and Skoog (MS) medium. The glutelin content (1.13 ± 0.201 mg/mg FW) was higher compared to those of total albumin, globulin and prolamin and most representative at mature vegetative apical stage (MVA). The highest (15.60 ± 1.966 mg/mg FW) and lower (2.82 ± 0.072 mg/mg FW) amount of phenol compound was observed in the mature dormant stages and immature vegetative distal stage (IVD), respectively. Regarding the peroxidases, highest activity (0.453 ± 0.055 OD/mg/ FW.5 min-1) was obtained in mature dormant apical stage. Apart from IVA state, there was no reactive explant cultured in vitro. The high percentage of budding and proliferation of budding (100%) and rooting (100%) were achieved with 12 µM Kin and 24 µM IBA, respectively. In the presence of 24 µM TDZ, multiple shoot was induced with a maximum of 5 shoots/explants. Micropropagation success of P. africana is influenced by cytokinin, physiological and biochemical status of single node cutting.

Prunus africana (Hook.f.) Kalman commonly known as Pygeum, is a large tree which grows in the afromontane forests between 1500 and 3000 m asl (Betti and Ambara, 2013). It is mainly used for the healing properties of its bark extracts, against benign prostatic hyperplasia (Kadu et al., 2012). Global demand of P. africana’s bark is esti-mated at more than 4000 t per year for a value of finished goods estimated at U.S. $220 million (Cunningham et al., 2002) and one of the main sources of supply to satisfy this demand consists of Cameroon natural populations (Nsawir and Ingram, 2007).
Unfortunately, much of this exploitation has been irresponsible with entire trees being girdled of their bark and left to die or, in other cases, felled to facilitate easier access to their bark (Betti, 2008). This massive exploitation leads to classify it as an endangered species in Cameroon (Cunningham, 2005). A decrease has therefore been noted in its population over the time in terms of tree density, area of occupation, and habitat quality due to the actual level of exploitation (Amougou et al., 2010). Thus, without the renewal of this culture, extinction may occur during the next decade. The key challenge is therefore to develop different methods of propagation that are both appropriate to the species and easily applicable to local communities.
Propagation by seeds is the main form of regeneration of P. africana. This propagation is the easiest and cheapest way usually used to regenerate trees. However, this method of propagation faces two major constraints that hinder access to seeds of P. africana: the low aptitude to germinate and the rapid loss of their vigor and viability during storage. To date, the best germination percentage obtained after 06 months of storage at 4°C is 37% (Avana, 2006). Vegetative propagation via cuttings using auxins in rooting media has been also done (Tchoundjeu et al., 2002).
Biotechnologies across in vitro micro propagation might be an alternative to produce seeds and planting stock material for plantation. Meanwhile, the success of micro propagation is dependent on the nature, origin, physiological and biochemical state of plant material (Yildiz and Er, 2002). Generally, young cuttings during dormant phase are more reactive than old cuttings in vegetative phase (Auge, 1989). These events are accompanied with some biochemical variations such as the protein and phenol level. Storage proteins are a source of reduced nitrogen, carbon, and amino acids for growing tissues.
Peroxidases are implicated in cell differentiation by cross linking low weight phenolic compounds in the cell wall (Almagro et al., 2009), thus allowing or restricting a cell growth. These phenol components are products of phenol-propanoid pathway. Phenols plays a major role in root process but their effect is under control of the biochemical endogenous level in cuttings. They are the main substrate of peroxidases and their preferential oxidation by peroxidase prevents peroxidase-catalysed oxidation of auxin.
The present investigation was carried out to determine physiological and biochemical status of single-node cutting in relation with their ability to budding and develop axillary buds. In addition, the effect of cytokinin on budding and development of multiple shoots and their rooting with auxin was assessed.

Biochemical changes of cutting at growing stages
The biochemical studies were conducted on cuttings at different stages during growth process; mature cuttings at Dormant stage (MDA, MDD); Mature cuttings at Vegetative stage (MVA, MVD); Immature cuttings at Dormant stage (IDA, IDD); Immature cuttings at Vegetative stage (IVA, IVD). Results reveal that all the reserve proteins were represented in each developmental stage but with a differential expression. The maximum amount of glutelin (1.13 ± 0.201 µg/mg FW) and albumin (0.178 ± 0.004 µg/mg FW) were observed at mature vegetative apical stage and mature dormant distal phase, respectively (Figure 1). Regarding globulin content difference was noticed only at the Mature and Immature stages. In addition, for any growing stage, there was not significative difference of prolamin content. The initial level of phenol (5.88 ± 0.06 µg/mg FW) at IVA increase with time during growing stages to reach a maximal value (15.6  ± 1.96) at MDA (Figure 2). Peroxidase activity of the single-node cutting exhibited a low initial value (0.01 ± 0.001 DO/g PF/5 min) in IVD, and generally increased gradually, reaching a maximum level (0.45 ± 0.05 DO/g PF/5 min) in MDA (Figure 3). 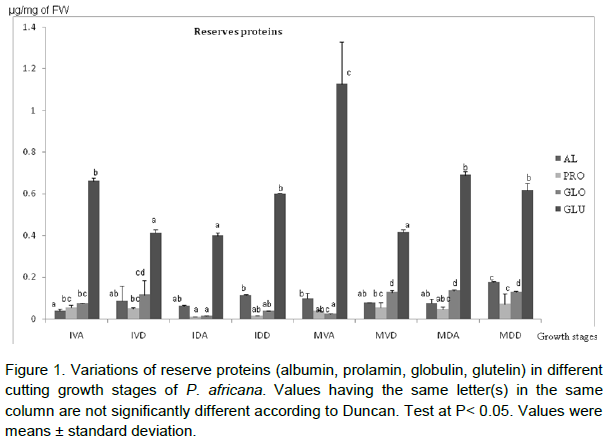 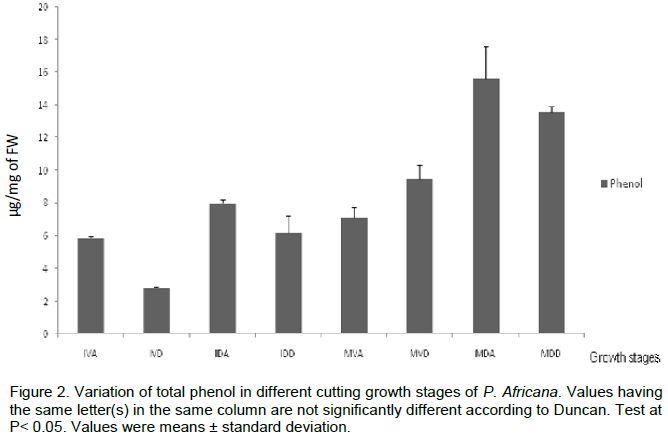 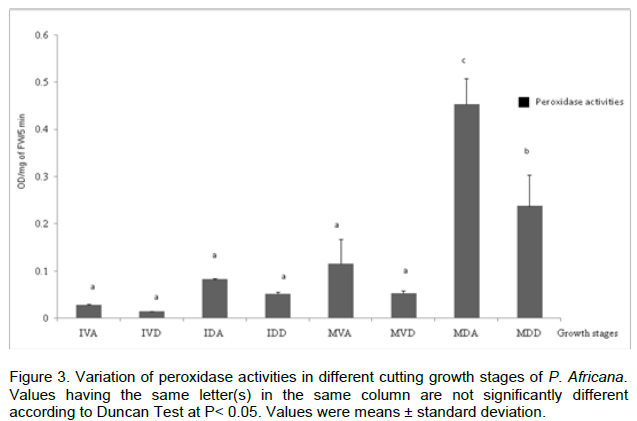 Budding and development of axillary buds or multiple shoot
Three concentrations of Kin and TDZ (4, 12 and 24 µM) were tested and compared to the control (without phytohormons) for the induction of budding. Among those concentrations, the control had the minimum budding rate (0%) while the maximum budding response (100%) was seen with 12 and 24 µM of Kin after 10 days of culture (Figure 4a). Proliferation of axillary buds gave the well developed plantlets at 4 µM with callus formation at the base 10 days after sub culturing in the same medium (Figure 4b). Well-developed shoots, 2 to 4 cm in length, formed the first roots at the base of their stem 10 days after transferring in MS medium supplemented with different concentrations of IBA (4, 12, 24 µM). Within 3 weeks, plantlets with short and thickness roots were observed with 24 µM of IBA (Figure 4c). IBA 12 µM gave (100%) the maximum rooting (Figure 4d, Figure 5). Single-node cuttings were harvested on 1 month old seedling (Figure 6a and b) and cultured in MS medium supplemented with TDZ and Kin at the same concentration (0, 4, 12 and 24 µM). After the budding (Figure 6c) with a highest rate (100%) at 12 and 24 µM TDZ, proliferation of multiple shoots was observed with a maximum time dependent 2, 3 and 5 shoots per explants (Figure 6d, 6e and 6f) and Table 1. 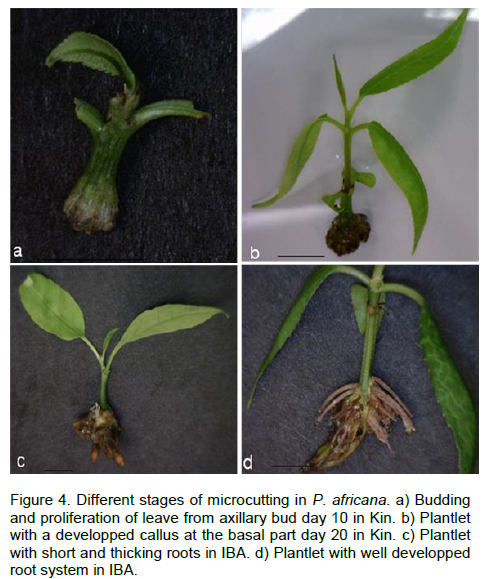 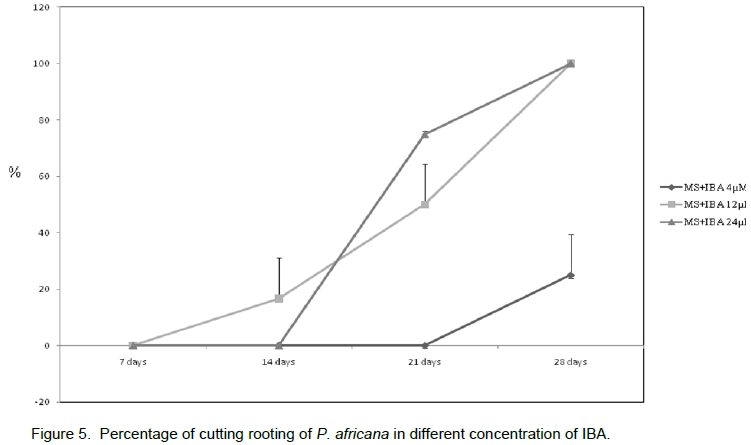 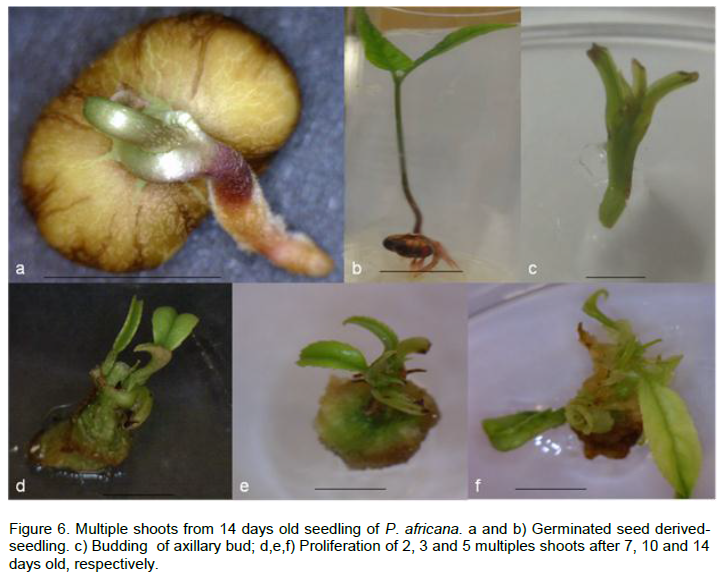 Storage proteins in trees have been examined at cytological, biochemical and molecular levels (De Castro and Marraccini, 2006). The external factors, such as temperature and short days, have been emphasized as key signals in inducing storage proteins accumulation in trees (Martre et al., 2003). In the present study, reserved proteins are present in all the mature or immature stage of cuttings. However, their expression is differential among the different categories of reserved proteins (Rate of glutelin higher compare to those of albumin, prolamin and globulin) and different stages of cutting. Accumulation of proteins with an increasing of total nitrogen content could enhance growth and development of organ from P. africana cuttings cultured in MS medium. Unfortunately only cuttings of IVA stage were reactive showing that many other factors influenced the growth of explants. In this experiment, the increasing of initial level of phenols which are the main substrate of peroxidase had a negative effect on in vitro cutting development. In fact, phenolic compounds were released from cut surface to the culture medium and were probably responsible of the phytotoxic effect. The oxidized products not only may contribute to failure of the explant development, but also may lead to the death of explants (Liu and al., 2015). Some factors including type of explant, light exposure, age and vigour of the donor plants, source of explant, genotype, size of explant affect the controlling of explants browning (Thomas and Ravindra, 1999). Time of the year at explant collection is also another important factor influences the explants browning. It is possible to alleviate the browning of explant with the selection of growing stage (Thomas and Ravindra, 1999) which is IVA in this study that presented the minimum phenolic compounds.
Different methods developed in this work showed that P. africana might be multiply with success from single-node cuttings of young plants. The successful percentage of different steps was assessed depending on the nature and concentration of phytohormons used. We observed a positive action of low concentration of Kin on budding and development of axillary bud. Similar results were obtained by Enjalric (1983) and Fotso et al. (2007) in Hevea brasiliensis and Ricinodendron heudelotii, respectively. AIB was used for rooting of cutting with 100% of maximal effect at 24 µM. Shiembo (1994) obtained the same results in R. heudelotii multiplied ex vitro into a propagation system. Maximum rate has been observed with 2 and 4 mg/L of IBA for rooting of Prunus laurocerasus L. (Sulusoglu and Cavusoglu, 2010). On the other hand, propagation of many woody plants such as Psidium guajava (Yasseen et al., 1995), Cola anomala and Cola nitida (Fotso et al., 2002) is limited by the difficulties of rooting. When using TDZ and Kin at high concentration, there had a development of multiple shoots from one axillary bud. These phytohormons have created probably at the level of buds, an antagonist effect of apical dominance of main axillary bud on lateral buds which enter in competition with the principal bud. In contrary, low concentration of Kin treatment promote the budding of principal axillary buds without reducing its dominance which maintain in a dormant state, lateral buds.
In conclusion, chemical profile of explants varies from different growing stages and influences its reaction. However, acquired results showed that tissues culture of P. africana via micro cutting is promising and could be useful alternative technique for more rapid clonal multiplication of this endangered species. For this reason, acclimatization of plantlets are required.

This research was supported by the International Foundation for Sciences (IFS), Sweden, through Grant N°: D/4916-1 received by NZWEUNDJI Justine Germo and Unesco l’Oreal Fellowship.