The country’s economic policies determine the levels of self-employment and entrepreneurship thereby impacting the economic growth (Gohmann, 2012). Normally, increases in entrepreneurship also lead to increase in total employment levels. In order to increase the levels of entrepreneurship, there must be deliberate efforts to educate or train people in entrepreneurship. Education and training in entrepreneurship should aim to give the students the additional entrepreneurial knowledge, attributes and capabilities that are needed for idea
generation abilities in the context of setting up a new small business (Jones, 2010). The lack of entrepreneurship education and training should, therefore, manifest in increased small businesses’ failure and increased levels of unemployment in an economy. As Nkirima (2010) has pointed, Higher Education Institutions (HEIs) should review their curricula to provide education that is more relevant and which is designed to promote the independence of the individual and responsible entrepreneurial capacity for job creation, development of the communities and increase in national development. It should help the students to acquire the new skills that enable them to identify new opportunities, become self-reliant and be job-creators and not job-seekers after graduation (Agbonlahor, 2016).
A high rate of unemployment among graduates in Malawi has negatively affected the economy. People tend to look for jobs after graduating but there are only a few opportunities and most of these job opportunities are snatched off by those in high positions where close relatives and friends with no qualifications at all are employed, leaving the deserving graduates out of the system. In addition, according to Malawi Government Secretary for Labour, Youth and Manpower Development, youths’ unemployment is estimated to be 70% thereby reaching ‘alarming levels in the country’ (Ntchindi, 2016). The study will highlight the contribution of entrepreneurship programs in making students more entrepreneurial and enhancing their intentions to start new ventures leading to job and wealth creation in Malawi.
Problem statement of the study
The paper examines the significance of education in entrepreneurship in the development of a knowledge-based economy, within Malawian context, with the aim of nurturing entrepreneurship at all levels of Malawi society. As a country, Malawi has embarked on small and medium enterprise (SME) promotion as a means of achieving sustainable economic growth and improving people’s livelihood. As highlighted in the Malawi Government Development Strategy, improved enterprise creation and growth will significantly improve the social and economic welfare of most Malawians.
As established from the module aims of many entrepreneurship courses, entrepreneurship education is believed to be a step towards addressing the challenge of high unemployment rates in Malawi, by inspiring graduates to pursue initiation and growth of their own enterprises. This in turn is expected to create jobs and contribute to other economic challenges faced in our country Malawi. Unfortunately, in many instances this in not the case in Malawi. While the National Statistics Office has indicated that about 92% of the Malawi populations have some family business or something of a business nature only 7% of these survive (Baluku  et  al., 2016).
The overall research question was, therefore, how entrepreneurship education affects the entrepreneurial intentions of HEIs students in Blantyre District. The research sought to answer the following specific research questions:
(i) What is the impact of entrepreneurship education being offered at the Malawi College of Accountancy on entrepreneurial intentions among students?
(ii) What is the effect of the time it takes to complete entrepreneurship education programme on the entrepreneurial intention of the students?
(iii) What is the effect of the trigger-events that take place during the entrepreneurship education programme on the intention to become an entrepreneur? 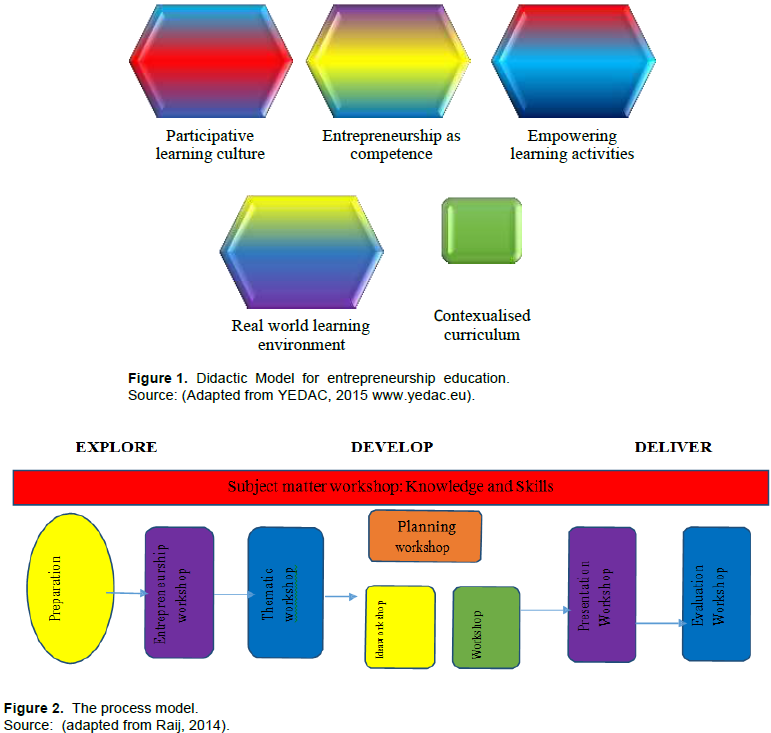 Entrepreneurial education model
Lackeus (2015) provides some initial advice on learning-by-doing activities that can trigger the development of entrepreneurial competencies. The teachers should give their students assignments to create value (preferably innovative) to external stakeholders based on problems and/or opportunities the students identify through an iterative process they own themselves and take full responsibility for. Such assignments lead to repeated interactions with the outside world which triggers uncertainty, ambiguity and confusion. This should be regarded as a positive outcome and a source of deep learning.
To alleviate the levels of difficulty and uncertainty such an assignment can result in a team-work approach which should be applied by giving the students access to increased creative ability and peer learning opportunities. Robust advice on how to manage the value creation process should be given to the students. Figure 3 outlines the relation between educational assignments, triggered activities/events and developed entrepreneurial competencies. 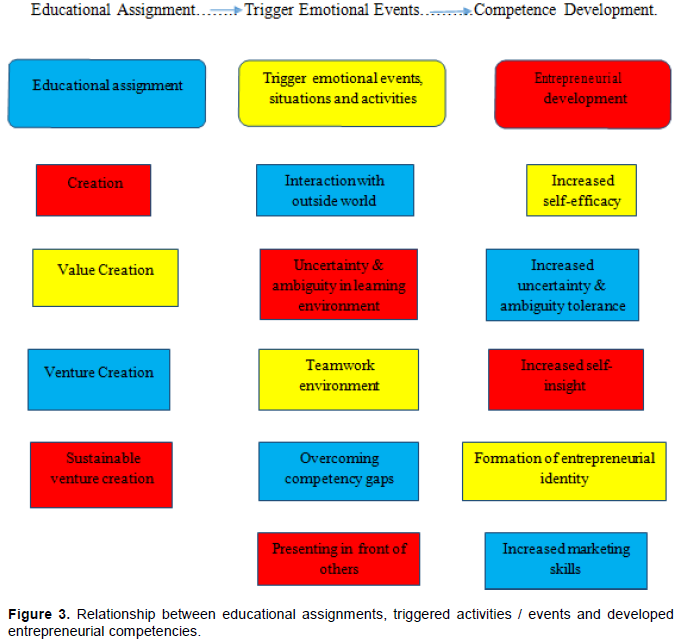 According to Fayolle et al. (2015), entrepreneurial attitude is the extent of a person’s positive intention of starting a new small business. The early development of entrepreneurial intentions is particularly important because it can lead to persistence in the future in the intention to start up a business. Also numerous studies on university students have shown that entrepreneurship education that focuses on self-employment as a career option has a positive effect on students’ entrepreneurial goals or intentions.
Jackson (2015) argued that the first purpose of education is to develop students as individuals who make their own decisions about their careers and in the second, the purpose of education is to create graduates to a politically determined model who support politically defined economic aims. Early entrepreneurship education experiences could inspire students towards an entrepreneurial career path (that is business start-up) or towards alternative career paths e.g. organisational employment (Elliot and Thrash, 2003). Entrepreneurial intention entails a person’s plan or motivation to perform a behavior which leads to the setting up of a small business and a personal conviction that the person will create that new business venture in the future (Kautonen et al., 2015).

The study involved the students pursuing Bachelor’s Degree in Business Management and Entrepreneurship at Malawi College of Accountancy in Blantyre District. It also included members of staff at the college who are involved in the teaching of the entrepreneurship programme. The former graduates of the programme were also included in the sample because they represented the actual interests of entrepreneurs in the industry after going through the programme and were determined to be the main focus of the study in as far as entrepreneurship education and intentions are concerned. The mixed methods research methodology was used in order to optimize the data collection and interpretation. In total 60 participants were purposively sampled for the study of which 42 responded to the questionnaire that was administered. The 60 respondents were purposively selected because they were believed to be information-rich. The questionnaire was pilot-tested on 5 respondents and was determined to be an adequate instrument for data collection. This represents a response rate of 70%.

In total, 22 items were included and asked in the questionnaire with 16 items dealing with the feeling and attitude that the respondents have towards the entrepreneurship programme. The options ranged from highly agree to highly disagree and yes or no answers. The remaining 4 questions or items were about their occupation, gender and the period taken to finish the programme.
The respondents were asked questions about being ever employed or owning businesses and the number of years they had been working or doing entrepreneurship
or if they have not done any. This gave information of those with enough knowledge of the purpose of studying the programme and the expectations of the institution as well as their own expectations. This assessed their knowledge of entrepreneurship and how they could use such knowledge after graduating.
Out of the 42 individuals, 16 were self-employed and working, 9 were running their own businesses, 10 were just employed, and the remaining 7 were students with no work or self- employment experience. The items in the questionnaire included the followings given in Table 1.
Of the 100% participants, all of them indicated that they had and still have a positive expectation of the entrepreneurship offering to deliver on the students’ expectations and equip them with the entrepreneurship mindset. On having and discovering entrepreneurial traits in the participants, 45.2% had entrepreneurial traits and mostly from families and close friends as they grew up in that environment while 54.8% of them denied having any entrepreneurial traits they could think of. In total, 62% of the participants agreed that they had been self-employed before while 38% of them had never been self-employed.
On trigger events that impacted the participants in their course or during the programme, 57% of them had several events that positively impacted their entrepreneurial intentions while 43%of them never experienced those trigger events. Of the 71% of the respondents, the programme matched their expectation of the programme while the remaining 29% were still not decided and were still expecting more. All the100% participants responded to Q21 and Q22 that they were 100% sure to recommend the programme to a friend and its continuation at the institution. Figure 4 summarizes the information given above.
From the questions that ranged from strongly agree to strongly disagree, the following were the responses. In total, 69% of the participants strongly agreed and some agreed that if they decided to open a firm, family and friends would approve and agree of that decision while 31% of them disagreed of any approval from their close relatives or confidants. In total, 64% of the respondents were confident that they could control the process of a new firm and all the necessary practical details of managing a firm and had a high probability of succeeding. 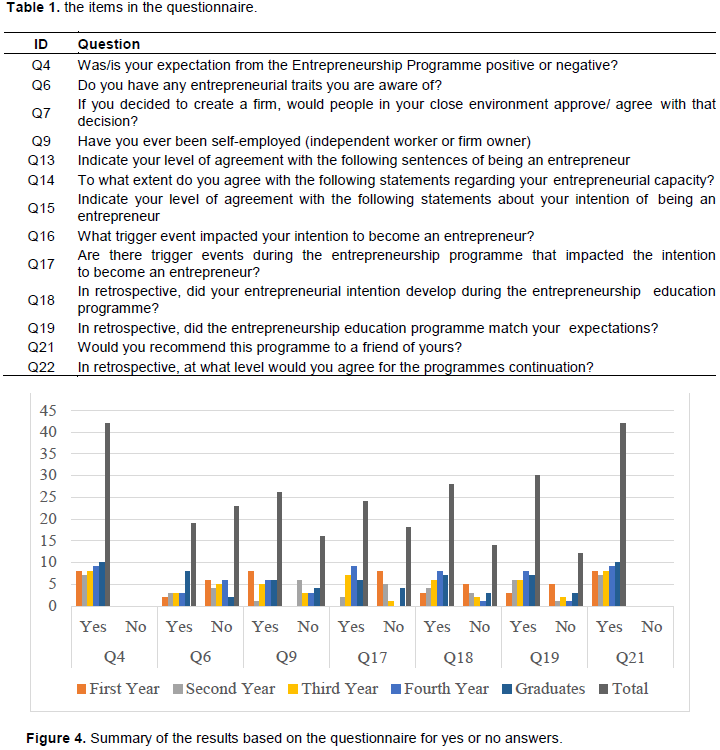 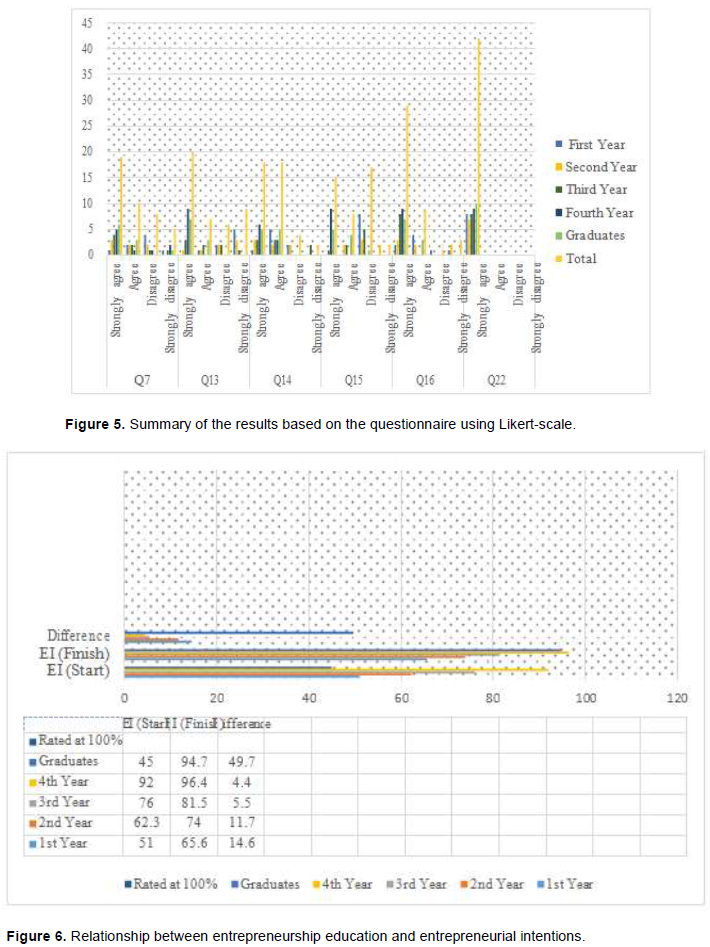