The impact of open innovation practice on innovative performance through intellectual capital: Empirical study on SMEs 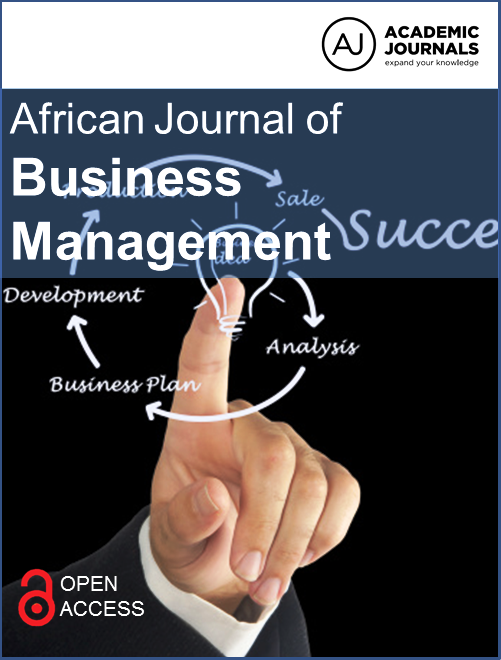 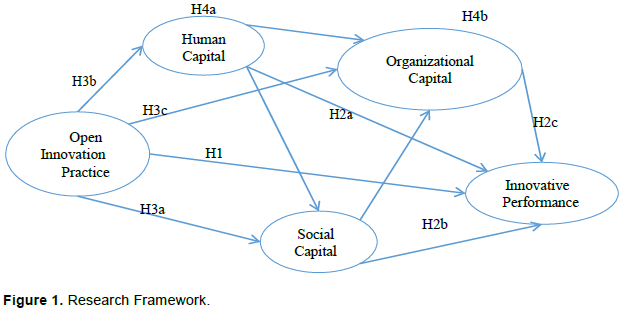 Sample and data collection
A survey was conducted from 08/2017 to 02/2018 to collect the data used to explore the effect of open innovation on intellectual capital and consequently innovative performance in SMEs. The  survey  questions  were  designed  to  assess  the  OI  practice,  intellectual  capital,  and innovative performances of SMEs. The initial survey draft was discussed with the firms’ owners, managers, and relevant governmental agency representatives. It was pre-tested    using   2 pilot   interviews   to   check   if    the    wording, comprehensibility, and sequencing of questions were acceptable.
SMEs relevant to the study were first screened from the master database in consultation with the representatives from the SMEs agents. The firms for the survey were then randomly selected from manufacturing firms comprising the metalwork, woodwork, textile and garment, leather, metal, and woodwork enterprises operating in the Northern part of Ethiopia. Considering the representativeness of the sector and zones covered in the study, four hundred firms were selected. The questionnaire was first given to each interviewee and the questions were asked face-to-face in the same order. 243 interviews were correctly and successfully performed, leading to a response rate of 60.75%.
The respondents who completed the questionnaire were mostly the owners as well as managers of the firms (92.6%), and managers but not owners (7.4%). The respondents were selected from the sectors (metalwork = 26.5%; woodwork = 23%; textile and garment = 26.5%; leather = 2%; metal and woodwork = 23.5%). Furthermore, the firm‘s operational age ranges from 4 to 23 years. The data were first screened and SmartPLS was applied for evaluating the model and testing the hypotheses.
Measurement of constructs
The measurement scales for the constructs were established based on existing academic literature and operational definitions. Accordingly, the OI practice measurement scale was developed based on concepts from (Laursen and Salter, 2006; Spithoven et al., 2013; Ahn et al., 2015). Eight items measurement scale was used to assess how the linkages with partners benefit SMEs. A 5-point Likert- scale (ranging from 1= less important to 5= very important) was adopted to measure the parameters. The measures for human capital assessed the overall expertise, skill, and knowledge of an organization‘s employees. Likewise, measuring items for social capital assessed the organization‘s ability to exchange and leverage within and among networks of employees, customers, suppliers, and alliance partners. The organizational capital measures the ability of the organizations to appropriately store knowledge in physical organization- level repositories. A five, five, and four items measurement  scales  were  adopted  from  (Subramaniam  and  Youndt,  2005)  to  assess  the human, social and  organizational  capitals,  respectively. A   5-point
Likert- scale from 1(strongly disagree) to 5(strongly agree) was applied to measure the parameters. Finally, the innovative performance was measured with seven items scales used by (Gunday et al., 2011). Similarly, a 5-point Likert scale from 1 (much worse performance than competitors) to 5 (much better performance than competitors) was applied to evaluate the innovative performance.

SmartPLS- SEM version 3.0 was used as a data analysis tool. It is a second generation tool which applies a component-based approach to SEM (Hair et al., 2016). It uses a two-step process to separately assess the measurement and the structural models. The first step, the measurement model, evaluates the validity and reliability of the scales. The second step, structural model, evaluates the research model and the paths among the research constructs.
Measurement model evaluation
As the measures are all reflective the individual itemand construct reliability, the convergent and discriminant validity of all items should be studied to examine  the  measurement model. The factor loadings, composite reliability (CR) and average variance extracted (AVE) were used to assess item reliability, construct reliability and  convergence validity respectively as recommended by (Hair et al., 2016). The minimum cutoff values are set at 0.7, 0.7 and 0.5 for factor loadings, CR, and AVE respectively. To achieve the loading cutoff point, three items from OI practice construct and one item from innovative performance construct which did not reach this value was dropped to maintain parsimony (Hair et al., 2016) Finally, as it is shown in Table 1 the factor  loading, CR, and AVE values are all above the suggested thresholds. Hence the items measurement reliability, internal consistency reliability, and convergent validity are satisfactory and sufficient.
Lastly, discriminant validity was assessed through the Fornell and Larcker (1981), which states that each latent construct‘s AVE should be greater than the construct‘s highest squared correlation of another latent construct. Table 2 shows that the correlation matrix of the constructs and the square roots of AVE (diagonal and bold). The diagonal values are all larger than the off-diagonal values   in  the  respective  rows  and  columns, signifying adequate discriminant validity.
Structural model evaluation
Once the measurement evaluation criteria were fulfilled, the goodness of the theoretical model should be determined. Structural model can be evaluated using the coefficient of determination (R2) and the strength of path coefficients (β) derived from bootstrapping techniques (Chin, 2010).  Besides, as the hypotheses formulated in this research    involved   mediation relationships, the significances of the indirect effects were verified by the variance accounted for (VAF) analysis (Hair et al., 2016). Figure 2 and Table 3 summarize the results of the final model. Table 3 summarizes the results of the proposed hypotheses. Accordingly, the OI practice has positive and significant direct influence on both the intellectual capital and the innovative performance, supporting H3a, H3b, H3c, and H1. Moreover, the organizational and human capitals have a positive and significant direct influence on the innovative performance, confirming H2a and H2c. But the impact of social capital on the innovative performance is not significant, rejecting H2. The explanatory power of the model was examined using the coefficient of determination (R2) value (Hair et al., 2016). R2 denotes the extent of variance in the endogenous constructs explained by the exogenous variable/s (Chin, 2010). As depicted in Figure 2, the R2 results indicate a robust model with 72% of the variance in the social capital, 66% of the variance in the organizational capital, 54% of the variance in the innovative  performance and 44% of the variance in the human capital explained by the independent variable/s. 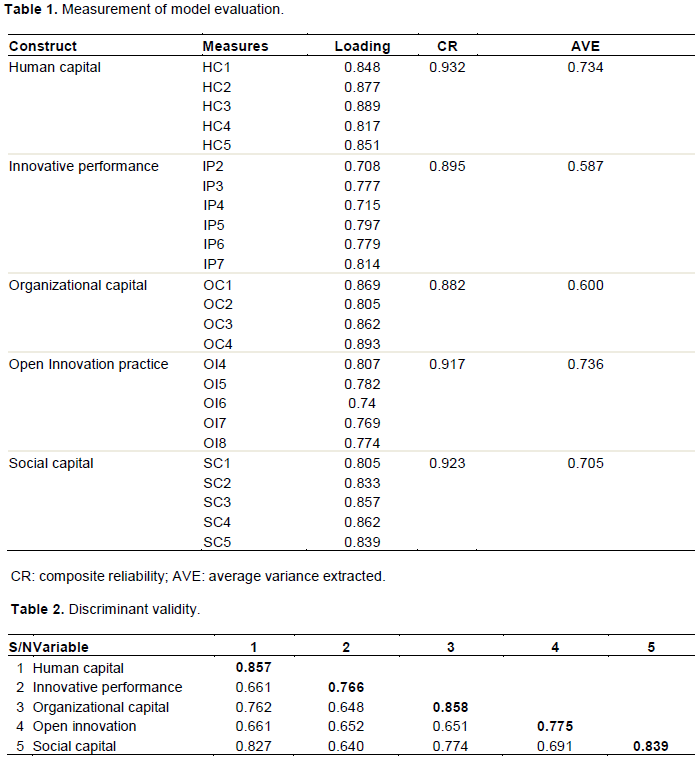 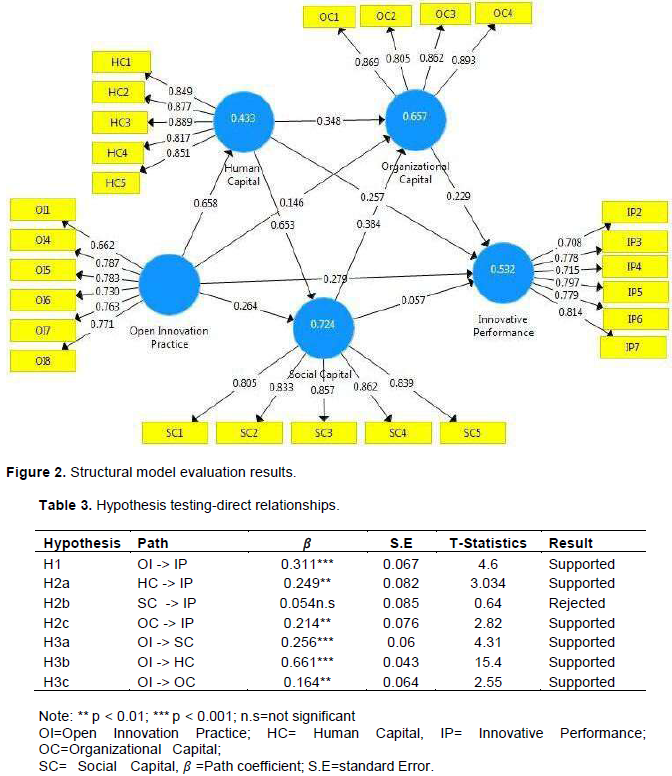 The analysis of mediation effects
Mediation occurs when causal predecessor X influences the outcome variable Y through intervening variable M (Figure 3). The whole effect of X on Y is divided into direct and indirect components. The route from X to Y without passing from M is called direct effect and represented by-c‘ ‖. The path from X to Y through M is called the indirect effect. The indirect effect coefficient (a x b) is the product of -a‖ and -b‖. The full effect (C) is hence the accumulation of direct and indirect effects (C=c‘+ a x b).
The bootstrapping approach was applied to check the mediation effect. The bootstrapping approach does not make any assumptions about the shape of the variables' distribution or sampling distribution of the statistics. It can be used to small sample sizes with high confidence. The approach is therefore flawlessly fit for the PLS method. Besides, this approach exhibits higher statistical power compared with the Sobel test. As suggested by Hair et al. (2016), the significance  of  the  individual  paths  (X-M  and  M-Y)  is  a requirement  for  the  mediation condition. Moreover, the indirect effect is assessed by the size of its effect relative to the total effect (Indirect effect/Total effect) described as variance accounted for (VAF). When the indirect effect is significant but does not absorb any of the exogenous latent variable's effect on the endogenous variable, the VAF would be less than 20% which implies almost no mediation. Conversely, when the VAF has relatively large outcomes (above 80%) a full mediation occurs. When the VAF value is between 20 and 80% the situation is characterized as partial mediation. Table 4 shows the bootstrapping results including direct, indirect, total effects and VAF for the paths with the potential mediating factors. Accordingly, as the impact of social capital on innovative capital is insignificant, the mediation role of social capital between open innovation practice and innovative performance (H4c) is  not  supported. The other mediating factors were evaluated with respect to the VAF, as the values of ‗a‘ and ‗b‘ are significant. Given the VAF values, the impact of OI practice on the innovative performance is partially mediated by human capital. But the organizational capital has an insignificant role in mediating this effect. Hence H4a is supported but H4b is dropped. Furthermore, the result from Table 4 confirms that the impacts of social and human capital on the innovative performance are partially mediated through the organizational capital. 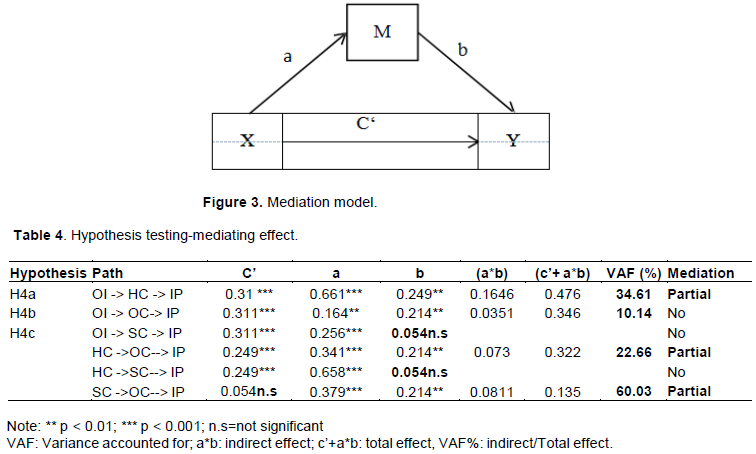 This work was supported by the Mekelle University, Ethiopia, under the project grant [CRPO/EITM/PhD/ 001/08]. The author is grateful for the financial support provided.