Institutionalism and development process of family firms in Kenya

This paper uses institutional theory to investigate the nexus between institutional context and development of the entrepreneurial process in family firms (from start-up, development, and growth to innovation and corporate entrepreneurship), focussing on the behaviour patterns of entrepreneurs. A qualitative case study methodology was used to examine 60 cases over a one-year period. Thirty of these cases were from two extreme contexts: affluent means and modest means. Six cases were considered to have entrepreneurial-development and growth potential and, thus were selected for in-depth interviews. The institutional context influences entrepreneurial development. While external institutions, such as regulatory policies and macroeconomic environment positively influence entrepreneurial development from an affluent-means context; they have no impact on entrepreneurial development in a modest-means context. Qualitative studies have ways of delving deeper into real issues that can help entrepreneurs begin to adopt modern management practices. Too many informal enterprises may never contribute to economic growth. Thispoints to the need for academia to begin generating meaningful discourses by looking outside the traditional family research topics. If policymakers consider the implications of the study, it will change the lives of many informal enterprises and reduce poverty.

Research in entrepreneurship is increasingly making a case for contextualized perspectives (Steyaert and Katz, 2004; Baker et al., 2005; Welter, 2011; Welter and Smallbone, 2011; Hunter and Lean, 2018), largely to recognize the diversity of entrepreneurial behaviours and the environmental conditions in which they operate (Welter and Smallbone, 2011; Jones et al., 2016). Shane (2003) argues that this would help explain ‘why’ and ‘how’ only  some  individuals  exploit   opportunities   that   yield greater benefits and successfully grow their enterprises, while others do not.
Personal characteristics and entrepreneurial behaviours as evidence shows may explain how different individuals perceive and exploit opportunities (Welter and Smallbone, 2011; Upananda and Kumara, 2014). However, as Zahra and Dess (2001) argue, the nexus between the institutional context and how an entrepreneur responds to opportunities in the course of entrepreneurial development (start-up, development, growth, innovation, and corporate entrepreneurship) is still not fully explained in the literature.
Family enterprise
Family enterprise has not been adequately defined. This is because ‘family’ can be an all-embracing term; it can be the immediate family, extended family, or family by marriage. Most definitions of the family enterprise focus on who controls ownership, management, and the board. For the purpose of this paper, the definition by Chua et al. (2009) suffices: “a business governed and/or managed with the intention to shape and pursue the vision of the business held by a dominant coalition controlled by members of the same family or a small number of families in a manner that is potentially sustainable across generations of the family or families” (p. 25).
The family business, as many studies show, is the dominant form of business organization around the world (Aldrich and Cliff, 2003; Sharma, 2004; Morck and Yeung, 2003; Chrisman et al., 2005). More than 80% of global enterprises are family-owned (Gersick et al., 1997). Most global economies are controlled by a limited number of wealthy families (La Porta et al., 1999). As recent studies reveal, entrepreneurial intentions of starting and growing an enterprise are not uniform (Galanakis and Giourka, 2017). Instead, “the process of transforming initial entrepreneurial intentions to a growing venture demonstrates that different approaches are required in order to foster each one of the factors identified. Focussing on activities and resources one stage at the time, or presenting parallel activities that reflect the different levels of maturity of regions, institutions, individuals and societal perceptions may provide better service to nascent and active entrepreneurs” (p. 317). An earlier study (Klyver, 2007) established that the involvement of the family members differs depending on the phase of the entrepreneurial process. Family members are most strongly involved in the emergence phase when the final decision to start or not has to be made. Furthermore, involvement of family members is most common when entrepreneurs are young and have higher education of no more than three years duration. Family members tend to be males with whom entrepreneurs have strong ties and these family members tend to be more critical than other actors in other roleâ€relationships (p. 258).
This paper, therefore, explores the influence of the institutional context on family firms and entrepreneurial development from start-up, development, growth, innovation, and corporate entrepreneurship in Nairobi, Kenya. Entrepreneurial behaviour is examined in two different contexts: affluent and modest. Institutional theory is used to examine six enterprises, three from each sector (primary, secondary, and tertiary).
Research problem
At this juncture, the importance of entrepreneurship to economic development and the lack of extensive research on the nexus between institutional context and entrepreneurial development of the family firm emphasizes the need to carefully consider this important topic (Ebner, 2005; Kasseeah, 2016). Further, the family is an important institution whose role in entrepreneurship cannot be underestimated (Aldrich and Cliff, 2003), especially in terms of resource mobilization (Steier and Greenwood, 2000; Elfring and Hulsink, 2001; Zhang et al., 2003). The nexus between the institutional context and entrepreneurial development of the family firm demands further investigation. Similarly, it should also be investigated as to why within the same environment some entrepreneurs enjoy greater benefits and their firms experience successful growth while others do not. The investigation, aimed to address these gaps in knowledge, is guided by three questions:
(i) How does the institutional context influence entrepreneurial development of the family firm?
(ii) In the same environment why do some family entrepreneurs enjoy greater benefits and successfully grow their firms while others do not?
(iii) What characteristics, if any, do family members in a successful enterprise possess?
Institutionalism in this study is conceptualized through the lenses of both affluence and modest economic means. In other words, the firms studied were analysed by comparing not only the differences between the two environments within which they operate but also the emerging institutional contexts within their locations. In this paper, the environment refers to the macroeconomic environment, and the context refers to the immediate environment and the activities wherein these enterprises are embedded.
Institutional theory
Earlier research on institutional theory generally defines it as a theoretical framework used to examine interactions between organizations and institutional environments (DiMaggio and Powell, 1983, 1991; Scott, 1995; Fang et al., 2012). In other words, “the institutional context consists of regulatory, normative, and cultural arrangements that engender, enforce, and limit economic and social activities. This definition outlines both formal and informal institutions” (Fang et al., 2012: 16).
Institutional theory presupposes that organizations, over time, will adopt similar behaviours when driven by a variety of pressures within their environment. Organizations, as it is argued, look at the characteristics of the  environment  and  then  conform  to  the  dominant societal norms, rules, and routines (DiMaggio and Powell, 1983). For organizations to survive, they must conform to the prevailing rules and belief systems in an environment (Scott, 1995; Meyer and Rowan, 1977; DiMaggio and Powell, 1983). For example, an enterprise in the informal sector will face pressure to conform to the majority, even when the situation dictates that the enterprise must change its status to formal. 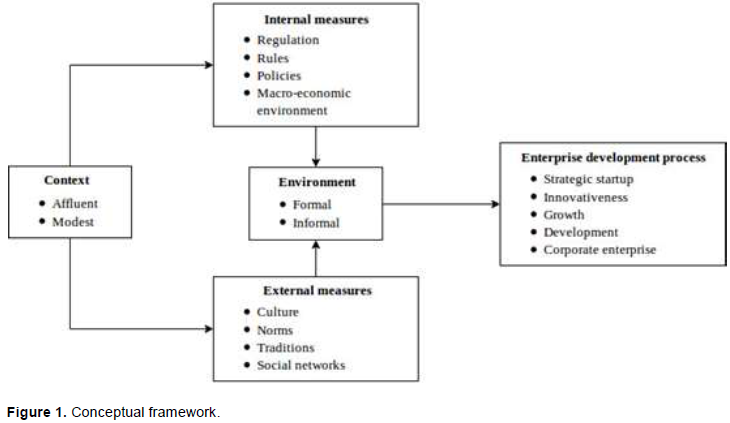 An analysis of the institutional context (Table 1) shows that it can influence entrepreneurial development. External institutions, such as the regulatory framework and its rules and policies, necessitate the modern management practices that are essential for a firm to attain the requisite growth trajectory to become a corporate enterprise. Although successful in some aspects, enterprises within the modest (informal) context are limited by entrepreneurs’ fear of compliance with the law. Success at the informal level is measured by the other side activities the entrepreneur has managed to develop, such as helping a relative (fosters internal institutions), setting up another side enterprise, or building their own home-any or all of which may not be directly complementary to the enterprise.
The six case studies demonstrate that while entrepreneurs in the affluent context leverage on opportunity  recognition,  informality  is  based  on  strong family ties, culture, and social networks. The affluent context is closely linked to formal enterprises, while informal enterprises are closely associated with the modest context. Formal enterprises, especially those that take advantage of information and communication technologies (ICTs), must adhere to certain global norms due to the nature of their business links outside the country. This is because, in most cases, their enterprises depend on venture capitalists to finance their growth.
The differences between formality and informality are significant, reflecting the behaviour patterns between college and high school-educated entrepreneurs. Also highlighted are the differentiating factors that may not just be education, but rather entrepreneurs’ orientation towards internal institutions and whether there is a failure to seek out and exploit opportunities. Within the modest context, entrepreneurs do not seem to seek out opportunities; rather, in all the observed cases, they are swept into and duplicate what their relatives are doing. By contrast, those within the affluent context seek out opportunities and leverage modern management practices to sustain their enterprises.
The growth trajectory of family firms in the affluent context is intertwined with the ability to raise capital from venture capital sources. This, in turn, has forced the development of a new culture that looks at the numbers and adheres to global standards. This contrasts with those firms from the modest context, which grow organically or leverage other internal institutions in order to meet their financial requirements. These entrepreneurs perform differently, with some succeeding and others failing, largely because of the influences of the business culture they adopt. 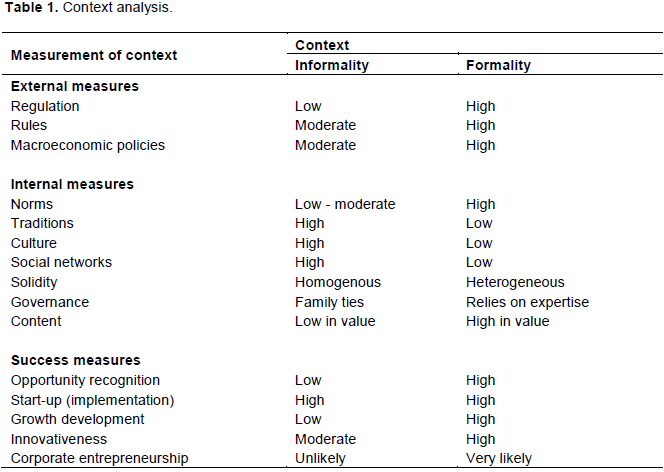 This study seeks to understand how institutional context influences entrepreneurial process in the family firm. It seeks to discover why entrepreneurs perform differently, and the characteristics, if any, that family members in successful enterprises possess. In all, the study confirms the theoretical assumptions. First, there are variations in the interactions between external and internal institutions as they relate to entrepreneurial development. How this happens depends on the environment in which the family enterprise is embedded in. Although the contexts are situated within one large city, the absence of external institutions (those that heavily influence the entrepreneurial development in affluent areas) in families within a modest context hinders them in terms of the same development trajectory that is enjoyed by the affluent who embrace these institutions.
Internal institutions encourage inward-looking tendencies that blur the enterprise-development process. Although innovativeness exists in a modest context, it happens intermittently, disrupted by the behaviour of starting  multiple   unrelated   enterprises.   This   perhaps explains why there is a large informal sector in developing countries. Policy interventions include incentives to formalize enterprises, training programs on enterprise scaling and developing innovative and entrepreneurial clusters. The number of enterprises within the informal environment is too large to ignore. As entrepreneurs are the engine of economic growth, entrepreneurship needs to grow; at the moment, there is no enough to support Kenya’s economic growth.
In practical terms, the study makes a meaningful contribution to the way we research family enterprises. Quantitative methodologies often fail to capture the nuances associated with entrepreneurs. Moreover, nonverbal actions and issues of trust matter in getting to the bottom of research. This study brings a different theoretical dimension to the study of the family enterprise, especially in developing countries where such investigations have focused only on the benefits of these types of enterprises and issues of succession.

In any research where the sample is too small, there is always a concern that the outcomes do not yield to generalisations. Nevertheless, the study generates a useful discourse that can lead to a better understanding of how institutional context influences entrepreneurial development. The study raises some curious questions that need further research. The behaviour patterns of entrepreneurs in the modest context appear to show that they are content with their modest achievements. This raises the question: does entrepreneurship in developing countries plateau when an entrepreneur attains modest achievements?