Agricultural market participation in Mozambique has historically been very low.  Despite a remarkable increase in pigeon peas production, the factors that influence smallholder participation in pigeon peas markets in Tete Province have remained unknown. The study therefore sought to determine factors that influence smallholder producers’ participation in the pigeon peas market using the transaction cost theory. Multi-stage sampling was used to collect data from 73 households through semi-structured questionnaires and logistic and multiple regression models were used to assess factors affecting smallholder participation in the pigeon peas market. Proximity to main market, access to credit, regular attendance of farmer group meetings, trust among group members, age of head of household, household private assets endowment and adequate labour, access to extension services and provision of  knowledge on pigeon peas production, and  early planting positively influenced smallholders market participation. Time to travel to main market; ratio of active household members; working in other farmers’ fields on casual basis; and food security limited smallholders’ market participation. The study recommended the implementation of credit access schemes, investment in extension services, setting up of well-equipped village based markets, setting up platforms for regular interaction of producers to build social capital and interventions that enable building of private assets. The increasing importance of pigeon peas merits further research in other locations along the Zambia-Nacala Trade Corridor.

Smallholder farmers dominate the agricultural sector in most of the developing world. Due to forces of globalization, the majority of the small farmers lack the capacity to compete on the global markets that are normally characterized by strict grading standards (Makoka, 2009). Development agents and policy  makers face a challenge of ensuring that smallholder farmers participate in global markets in a way that increases their competitiveness, while at the same time gaining sustainable growth. Market participation is both a cause and a consequence of economic development (Boughton et al., 2007).  Markets  offer  households  the  opportunity to specialize according to comparative advantage and thereby enjoy welfare gains from trade. Recognition of the potential of markets as engines of economic development and structural transformation gave rise to a market-led paradigm of agricultural development during the 1980s (Reardon and Timmer, 2006) that was accompanied by widespread promotion of market liberalization policy agendas in Sub-Saharan Africa (SSA) and other low-income regions. Furthermore, as households’ disposable income increases, so does demand for variety in goods and services, thereby inducing increased demand-side market participation, which further increases the demand for cash and thus supply-side market participation (Boughton et al., 2007). The standard process of agrarian and rural transformation thus involves households’ transition from a subsistence mode, where most inputs are provided and most outputs consumed internally, to a market engagement mode, with inputs and products increasingly purchased and sold off the farm (Timmer, 1988; Staatz, 1994).
In Africa, agricultural smallholder producers are the basis for development and they make majority of the population and account for large share of GDP and export earnings (Warner and Campbell, 2000). Small-holder producers in developing countries increasingly seek to participate in global markets. This participation is an important driver of economic and social progress throughout the developing world (Stanton and Burkink, 2008). Smallholder farmers face high transaction costs and uncertainty arising from missing or inefficient input and product markets, high access barriers and costs of information, and other market imperfections that restrict market access (Jones et al., 2002).
Agricultural market participation in Mozambique has historically been very low. Rural smallholder households, who devote most resources to agriculture and draw over two thirds of their income from crop production, are typically subsistence oriented (Benfica and Tschirley, 2012).  In recent years, particularly since 2008, prices of major food crops have increased in international markets. Pigeon peas production, a traditional crop in Central and Northern Mozambique, has expanded significantly at an annual rate 8 percent since 2008, faster than any other food crop (Walker et al., 2015). This has made pigeon pea important to the Mozambican smallholder sector, given that even with negligible inputs; it is one of the most stable yielding crops (Walker et al., 2015).
There has been  a remarkable increase in production and dedicated commercialization efforts of pigeon peas among them; export and establishment of three pigeon peas processing plants in Zambezia, Beira and Nacala by the Export Trading Group (ETG); International Crops Research Institute for the Semi-Arid Tropics (CRISAT) and National Agricultural Research Center for Mozambique (IIAM) release and promotion of  high yielding pigeon peas varieties, and provision of technical services on the benefits of row cropping  that  establishes
the foundations for agricultural intensification  (Walker et al., 2015),  joint project on promotion of market oriented production of pigeon peas by  the Netherlands Development Organization (SNV) and Alliance for a Green Revolution in Africa (AGRA) in Tete Province and setting up of buying centres at Zobue in Moatize District, by buyers such as Olam and Kafaitulah Commercial.
Despite these efforts, the factors that influence participation in pigeon peas market in Tete Province have remained largely unknown. Furthermore, little research has explicitly and systematically explored the transaction cost related factors that influenced participation of smallholder producers in pigeon peas markets in Mozambique. The study sought to determine factors that influence smallholder producers’ participation in the pigeon peas market using the transaction cost theory.

The study used primary data that was collected from a sample of 73 farmers in three Districts; Moatize, Angonia and Tsangano of Tete Province in Mozambique. The three districts were selected based on the intensity of pigeon pea production. Simple random sampling was used to select three localities form Moatize District, one locality each from Tsangano and Angonia Districts. The study selected nine villages using simple random sampling. From each selected village, a farmer leader was selected and systematic random sampling was then used to select every second household in a village. Key informants were selected from three localities based on the intensity of pigeon peas production.
Semi-structured questionnaires were used to collect data through structured face to face interviews. The study also used reading (document analysis) as an information gathering method thus several publications and reports were read for the purpose of collecting secondary data.
Data analysis
To identify the transaction cost related factors that affected the quantities of pigeon peas marketed, a multiple regression model was estimated. This type of technique allows for prediction of a score on one variable on the basis of their scores on several other variables. In multiple regressions, more than one variable is used to predict the criterion.  To construct the multiple regression models using the Statistical Package for Social Scientists (SPSS), the backward method for selecting explanatory variables was used in the study as recommended by Landau and Everrit (2004).  The study also uses logistic regression analysis to predict market participation outcome based on single variable and also to estimate the magnitude and direction of effect of variable.
This study used the chi-squared for a 2 X 2 contingency table test and Fishers’ exact test to assess whether there was any association between pigeon peas market participation and some transaction costs related variables. In addition, the study used logistic regression analysis to predict market participation outcome based on single predictor variable and to estimate the magnitude and direction of effect. Variables that were initially found to be significantly associated with market participation based on cross-tabulation results and Fishers’ exact test were analysed. The logistic regression model was selected owing to its rigour and strength  in  predicting  outcomes  on  both  continuous  and  binary
variables (Stoltzfus, 2011).
As postulated by Peng et al. (2012), regression techniques are versatile in their application to research because they can measure associations, predict outcomes, and control for confounding variable effects. As one such technique, logistic regression is an efficient and powerful way to analyze the effect of a group of independent variables on a binary outcome by quantifying each independent variable’s unique contribution. A logistic regression model allows us to establish a relationship between a binary outcome variable and a group of predictor variables (http://www.ats.ucla.edu accessed on 01/08/2016).  It models the logit-transformed probability as a linear relationship with the predictor variables.
In this study, let y be the binary outcome variable indicating market participation or non-participation.  With 0/1 and p be the probability of y to be 1, p = prob(y=1). Let x1, .., xk be a set of predictor variables as shown in Table 1.  The logistic regression of y on x1, ..., xk estimates parameter values for β0, β1, . . . , βk via maximum likelihood method of the following equation:

where Y represents the quantities of pigeon peas sold, and X1…Xk represent the explanatory variables as shown in Table 2. The error term, ε, represents the collective unobservable influence of any omitted variables. In a linear regression, each of the terms being added  involves   unknown    parameters,   β0, β1,…βk, which    are estimated by “fitting” the equation to the data using least squares (Rubinfield, 2011). 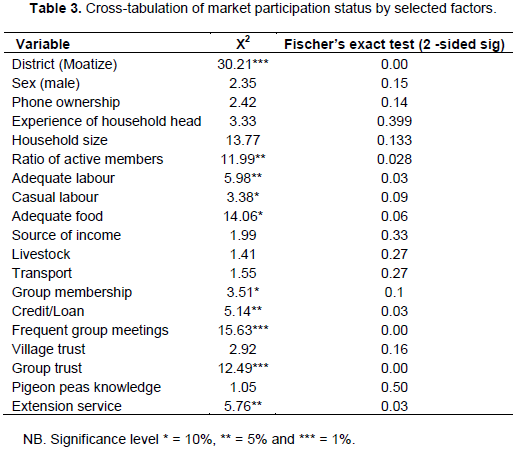 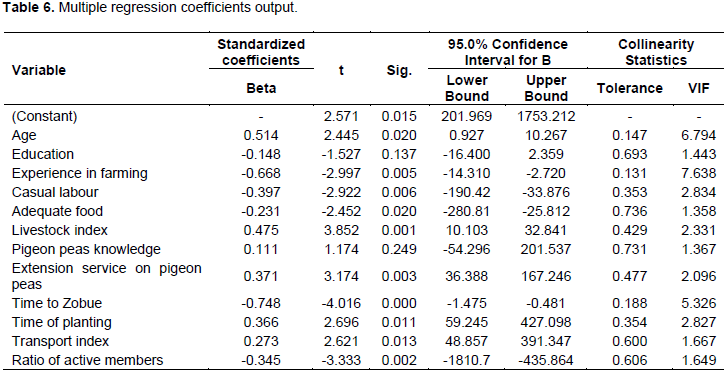 Pigeon peas market participation was positively influenced by proximity to main market depicting location specificity of farm; access to credit, social networks depicted by regular attendance of farmer group meetings; and trust among group members; and age of head of household part of household organization;  household endowment in the form of livestock and transport ownership and adequate labour; access to information portrayed by access to extension services and knowledge on pigeon peas production, and time specificity of operations represented by early planting. However, time to travel to main market, ratio of active household members, working in other farmers’ fields on casual basis and food security limited smallholder producers market participation.

The study recommended the implementation of credit access schemes, investment in extension services; to improve access to information on production and marketing through dissemination of well-structured extension messages, setting up of well-equipped village based markets, setting up platforms for regular interaction of producers to build social capital and interventions that enable building of private assets such as livestock transfer schemes.  Furthermore, given the increasing importance of pigeon peas due to climate change, stable yields and increasing demand in India merits further research in other locations with larger samples particularly along the recently completed Zambia-Nacala Corridor railway line is recommended.