Corporate governance and risk disclosures: An empirical study of listed companies in Kenya

For this study, the deductive approach was used, which according to Saunders et al. (2016), is most common in the positivist researches. Hypotheses were developed using the relevant theories and tested empirically to examine the relationship between corporate governance characteristics and risk disclosures.
Data were collected from listed companies' annual reports. The sample consists of 48 non-financial listed companies in the Nairobi Securities Exchange (NSE). The study examined risk disclosures practices for the period 2010-2016. The focus was on non-financial sectors. Financial firms were omitted from the study firstly because they are regulated by other and different rules which may influence disclosure practice such as the Banking Act. This is in line with most of the risk disclosures studies (Khlif and Hussainey, 2014; Al-Maghzom et al., 2016).
Risk disclosure index development
To analyze data, content analysis was done from which a risk disclosure index was constructed in order to measure the level of risk disclosure.  A content analysis of the annual reports was performed based on detailed decision rules. The decision rules were mainly adopted from ICAEW (1999), Linsley and Shrives (2006), Konishi and Ali (2007) and Abraham and Cox (2007) with some modifications. The items to include in the risk disclosure were identified through a pilot study. The procedures applied were adopted from Beattie et al. (2004) and Rajab and Schachler (2009).
A total of 48 items were identified for inclusion in the risk disclosure construction. A discourse index can be weighted or unweighted. In this study, the risk discourse index unweighted because the study did not focus on a particular user group (Naser et al., 2006). An item was given a score of one if disclosed and a score of zero if not disclosed.
To calculate the risk-disclosure index, the following formula was used:

Where, RDIj is the risk disclosure index for firm j, rd the disclosure score for firm i and if the item was not disclosed and 1 is the item was disclosed, nj the maximum number of items that could be disclosed.
Reliability of the data
To test the reliability of the data, an independent coder was used to code independently of the initial coder.  Scott’s pi test was used in order to test the reliability of the data (Linsley and Shrives, 2006; Abraham and Cox 2007).  The reliability test scored 83.4, 81.2, 84.2, 86.5 and 84.6. A score of 75 in the reliability test is considered enough (Milne and Alder, 1999; Beattie et al., 2004; Abraham and Cox, 2007).
To ensure the validity of the data, the risk disclosure items were reviewed against the IFRS disclosure checklist produced by the ICAEW and against two detailed IFRS compliance checklists which were obtained from professional auditors (Deloitte and KPMG). The purpose of using these checklists was to verify the completeness of the self-constructed checklist related to risk disclosure IFRSs.
Statistical tests and methods
Descriptive statistics
A one-way analysis of variance (ANOVA) was used to determine the significance of differences between the means of the variables. In addition, the nonparametric Wilcoxon Signed-Rank Test was performed, to compare two sets of scores in order to investigate any change in scores from one-time point to another.  This test is assumed when the assumption of normality is violated because it does not assume normality (Altman, 1991).
Regression analysis methods
The sample of companies in this study comprised 48 non-financial firms listed at the Nairobi Securities Market over the seven-year period, 2010 to 2016. The model consisted of corporate governance characteristics and firm-specific characteristics. Both univariate and multivariate analyses were used.
Measurement of variables (dependent and independent variables)
The main regression model examined total risk disclosures and factors of corporate governance firm-specific characteristics. Corporate governance variables included board composition, ownership structure, and duality of leadership, internal control, internal auditing, and risk management. Firm-specific characteristics were company size, industry type, profitability, liquidity, auditor type, and company risk level (Table 1). 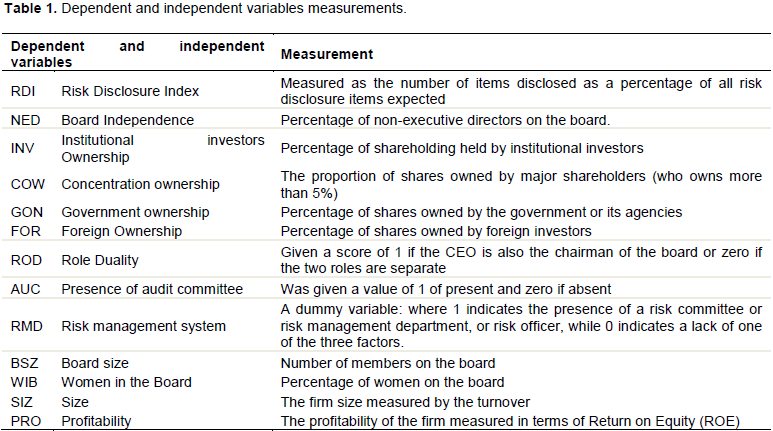 Multivariate analysis
In this study panel data was used where the same cross-sectional unit was measured over time and analysed using the multiple regression method. According to Wright and London, 2009 multiple regression is an appropriate method of analysis where the objective is to determine the combined effects of the independent variables on predicting a dependent variable is desired.
Assumption of normality
In order to test for normality, the graphical method was used whereby the Normal Probability Plot was done. From the analysis, it was found that total asset, market capitalization, and revenue variable, were not approximately normally distributed. The values of these variables were, therefore, transformed into natural logarithms. The logarithmic transformation has been widely applied to address the non-normality of variables (Lopes and Rodrigues, 2007).
Regression model

Regression analysis
The results of the regression model indicate a significant relationship between the dependent variable (risk disclosure) and the corporate governance attributes (Table 2). The R2 of 0.872 suggests that corporate governance variables included in the model largely explain the variance in risk disclosures.
From the presence of the result of non-executive directors, ownership   concentration,  foreign  ownership, and percentage of women on the board were found to affect significantly the level of risk disclosures. Government ownership, cross directorship, role duality, presence of audit committee and the board size were found not significant.

Ownership concentration was negative and significant. This means that as ownership becomes more concentrated  on  a  few  people,  less  risk  information is disclosed. Companies owned by a few members may not want to disclose all the information because they have a lot of information about the company. These findings are consistent with findings of other researchers such as Mohobbot (2005), and Al-Maghzom et al. (2016) and consistent with signalling and agency theories which posit that directors of companies with highly dispersed ownership are likely to disclose more information to mitigate against information asymmetries.
The relationship between risk disclosures and the presence of an audit committee was found to be positive and significant. This is an indication that the number of meetings of the audit committee does influence the level of risk disclosures. These findings are inconsistent with the findings of Allegrini and Greco (2013), and Al-Maghzom et al. (2016). This finding is also consistent with the agency theory which proposes that in order to reduce agency conflicts and information asymmetry, internal and external monitoring practices should complement each other.
Board size has a negative and significant relationship with the level of risk disclosures. This implies that the larger the board the lower the level of risk disclosures. This result is consistent with findings in Al-Maghzom et al. (2016). It is also consistent with agency theory which suggests that larger boards are not effective. The ineffectiveness of larger boards has also been shown in other studies such as Coles et al. (2008) and Guest (2009).
On the control variables, both firm size and profitability were found to be significantly positively correlated with risk disclosures. That firm size affects positively the disclosure of information has been found in a number of studies such as Elzahar and Hussainey (2012) and Wachira (2018). This means that larger firms are likely to disclose more information. This is consistent with signalling and agency theory which argue that larger firms are motivated to disclose more information in order to differentiate themselves from smaller ones. Therefore, larger firms are likely to use risk disclosures to differentiate themselves from smaller firms (Khlif and Hussainey, 2014).
That profitability of a firm affects its disclosure of risk information has also been supported by several studies (Khlif and Hussainey, 2014; Al-Maghzom et al., 2016). This means that highly profitable firms are likely to disclose more risk information. Directors firms for high profitable disclose risk information to signal stakeholders of their performance. This is consistent with signalling theory.

It is recommended that for companies to increase their level of risk disclosures, there is a need to strengthen their corporate governance mechanisms. To further understand the relationships between corporate governance mechanisms and the level risk disclosures more documents in addition to the annual reports of companies should be studied. The study should also be extended to include companies that not listed on the stock market and also comparative studies between countries, particularly in the African region.