The Savings and Credit Cooperative Societies (SACCOS) which are co-operative financial models are flourishing in most of the developing economies recently. However, loan repayment capacity remains a challenge that threatens their future. Using financial statements data for the year 2012, from 36 SACCOS in Kilimanjaro Region, Tanzania, and using descriptive statistics and regression models in the analysis, this study examines the relationship between financial performance and loan repayment capacity. It thus examines the extent by which SACCOS are capable of recovering the loan issued and also the financial ratios that explain loan repayment capacity in SACCOS. The study depicts that there is a severe financial risk management problem among Tanzanian SACCOS. Focusing on sustainability is significant for improvements of loan repayment, but focusing on profitability in SACCOS results to an adverse loan repayment. The study asserts that the primary focus of SACCOS should not be profit but member’s wealth maximization and sustainability of the institution. Moreover, we suggest that in addition the traditional means of dealing with financial risk, the uses of a modern risk management tool like credit scoring should be considered in evaluating borrowers. 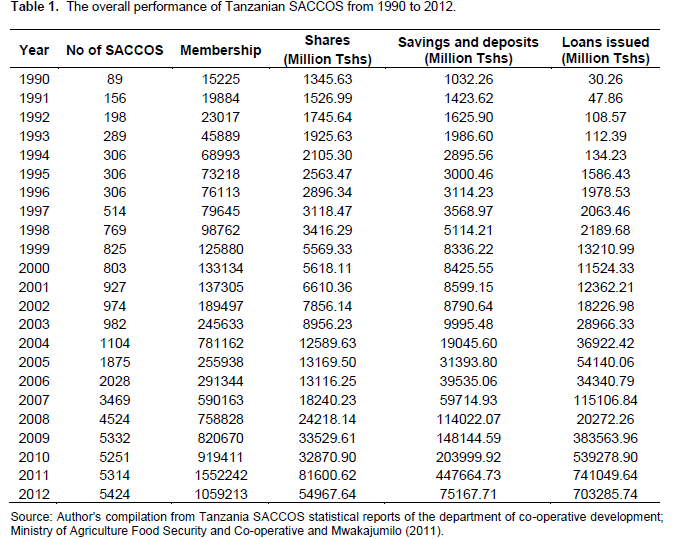 The analysis of this study grounded on the importance of the CRM in financial institutions. CRM theory based on risk identification, analysis, monitoring, evaluation, and mitigation. Under this theory, therefore, the study examined how various financial ratios affect credit risk management in SACCOS. The study used secondary data gathered from SACCOS network known as Umoja wa SACCOS za Wakulima (USAWA). USAWA is an organization, created in 2006 that gather Savings and credit co-operatives into a network to mutualise technical and financial support and contribute to improving access to the management of financial services. Data collected from 2012 financial statement of all SACCOS members of USAWA (up to November 2014 there were 36).
The loan repayment performance is the dependent variable. It is measured by the percentage of the Portfolio at Risk (PAR). PAR formula is an unpaid balance divided by Current Loan Amount (outstanding portfolio) (Khan and Jain, 2009; Ledgerwood, 2000). For the sake of making a broad discussion, the study used both PARs in 30, 90, 365 days, as well as total PAR. In general, the PAR ratio shows the exact situation about the institution’s portfolio at risk and is used to evaluate potential losses, as well as any future credit risks. Increasing the percentage (ratio) means reduced loan repayment performance.
The independent variables were financial ratios, with the attentions on the profitability, liquidity, sustainability and growth ratios. Usually, for the firm’s credit risk evaluation, the financial indicators are the primary tools. The reason is that they have the nature of comparable and measurable, and so they make the comparison between the firm and historical data possible (Wei et al. 2010). The assumption in this study is that SACCOS are non-profit institutions thus the increase in profit increase adverse loan repayments. Also, SACCOS should focus on investing in loans than physical assets because they were made to provide finance to the members. Thus, liquidity is expected to lower financial risk. In term of sustainability, the assumption is that sustainable SACCOS are that which can collect the loans issued. Hence, sustainability lowers financial risks. Similarly, reasonable growth is necessary and a sign of sound performing loans. Table 2 provides the summary of independent variables (financial ratios) that is used in the model. Most of the ratios used were adapted from previous works that focused on other forms of enterprises, like Wei et al. (2010). However, the researchers were careful in calculations because SACCOS are not perfectly the same as other forms of financial institutions.

We started by analyzing the capacity of SACCOS in managing loans. In this case, the performance is presented in terms of loan repayment performance in PAR (30, 90, 365, Total). Table 3 shows that some SACCOS had PAR equal to zero. The indication is that there are SACCOS, which manage well their loans. However, most of these institutions are having a serious problem. For instance, basing on the criterion that, PAR30 days should not be above 5% of less than 2% for loans PAR 90. However, the mean values are far above the standards.

Table 4 is a summary of the default for two years, 2011 and 2012, for 36 SACCOS’ members of USAWA. First of all, the table reveals that there were no significant differences in loan performance between the two years. Secondly, the nonperforming loan is SACCOS more than 60 of all issued loans. The implication is that, at large, the industry has reduced loan recovery. These findings are in agreement with those of Magali (2013a and 2013b), and Lagat et al. (2013) that SACCOS have higher credit risk.

In Figure 1, the correlation between loan repayment performances in different periods is presented. The results indicate that there is a close relationship between PAR 30, 90, 365. The findings suggest that when SACCOS is failing to recover the loan in early days it is not capable even in the long time. The inverse is also true. 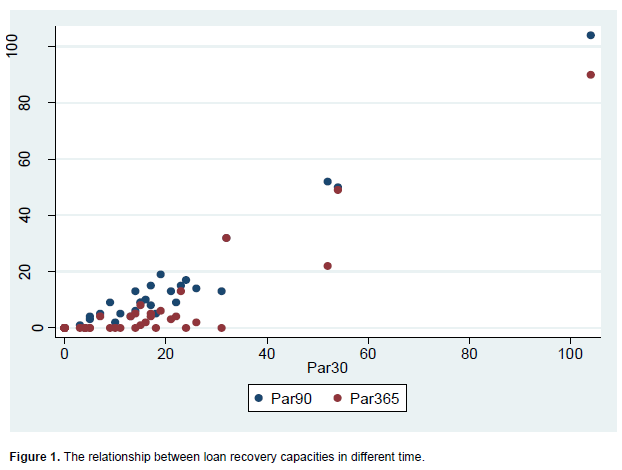 Table 5 is the empirical results. The table shows the estimated coefficients of all variables included in Equation 1, using four dependent variables (PARs) and multiple independent variables. In the table, the t-values are in parenthesis. Also *, **, and *** indicate significant level at 1%, 5% and 10% respectively. The STATA software determined the coefficients.

From the Table 5, OSS, CER, QCR, IGR, and PGR are the significant factors that influence the loan repayment performance in SACCOS. OSS is a show the negative relation to the loan repayment. The meaning is that increase in OSS increase SACCOS loan repayment capacity (note that higher percentage of the portfolio at risk indicate poor loan recovery). SACCOS, which have a higher level of OSS, are those which can maximize the collection of income from their investments. The effects of OSS are similar to the IGR that represent the growth of SACCOS, which also shown an opposite relationship with loan repayment performance. It shows that those SACCOS that have higher income growth also have good repayment capacity. This observation is similar to that of Ayayi (2012) that little credit risk has a close relationship with the sound financial sustainability.
However in the case of liquidity there are mixed results. QCR is having an inverse relationship with poor loan repayment. The meaning here is that SACCOS, which were liquid, are those which had little credit risk. However, on the other hand, more CER means reduced loan repayment performance in SACCOS. A lot of current assets in SACCOS indicate a higher level of issuing loans. This finding is congruence to the Magali (2013a) whose findings are that the larger the size of the loan granted the higher the credit risk.
Lastly the PGR (profitability growth) lower the repayment capacity. The indication is that, when an SACCOS is aiming at a profit, firstly it is needed to expand loans that are their primary business. As the results of focusing on profit, the first thing is that SACCOS increases the average loan. The problem is that most of the people collect much money without proper business plans, in which most do not manage the investment and have difficulty in repaying. Also, some SACCOS give loans to the ineligible applicants, for example, those who have no enough deposits by using compensating balance idea. For example, a candidate, who asks for Tshs 10,000,000, is approved for a loan and receiving Tshs 7,000,000 whereas Tshs 3,000,000 remains in SACCOS as compensating balance. Of course, it is the easiest way to expand business and may lead to higher profit but in turn, the institution is increasing the risk because there is less security for their money. When SACCOS are focusing on profit, they mostly depend on external funds and possibly try to stretch their managerial and institutional abilities. As commented by Huppi and Feder (1990), this should never be done in credit cooperatives. Also, the results indicate that an increase in CER and CPR increases the credit risk in SACCOS. These are the measures of liquidity and solvency. These findings might be slightly different from other creditors like commercial banks when they are rating borrowers (say institution borrowers), the higher ratio is good. For instance, it is indicated in Khan and Jain (2009) that the ratio of more than 1.5 is good as compared to that of less than 1.5.

This paper adds knowledge on credit risk management in SACCOS by analyzing the relationship between financial performance (measured by financial ratios) and loan repayment performance in SACCOS. The findings suggest that despite the available traditional tools used in SACCOS to manage financial risks, there is a higher level of credit risk problem in SACCOS. Also, findings suggest that focusing on sustainability and growth of SACCOS is a valuable tool to fight reduced loan repayments by member-borrowers. However, the results show that focusing on profitability lower loan repayment in SACCOS. The reason is that when SACCOS are focusing on the maximizing profit they tend to stretch their activities beyond their managerial and institutional abilities. As such most of the people collect much money without proper business plans, in which most do not manage the loan and have difficulty in repaying. Also, sometimes SACCOS give loans to the ineligible applicants, for example, those who have no enough deposits or have been members for a short time that their behaviors are not well known. In the case of the level of liquidity, the study found mixed results for different liquidity ratios.
From these findings, the implication is that the financial performance is important in showing the loan repayment performance. These findings congruence to the previous works like Wei et al. (2010) and Sharma and Zeller (1997) which acknowledge the role of financial indicators on firm’s credit evaluation. Thus, as cooperatives based microcredit institutions, SACCOS should focus on relevant performance, which focuses on maximizing the member’s welfare and not maximizing profit. It is also a time for SACCOS to reconsider appropriate means to improve their loan recovery. In this paper, we suggest that SACCOS can use, and it is important to use credit scoring model following the fast growth experienced in recent years. As also shown by Berger et al. (2007) and Frame et al. (2001), credit scoring on small financial enterprises tends to increase portfolio quality by reducing information opaque. That is to say, an essential tool in CRM is appropriate information through a highly efficient loan administration and management information system. This study has deployed secondary data from 36 SACCOS for one year, which then can affect the conclusion. As such, an area for future research, the study can be conducted by surveying large sample and including more financial factors and nonfinancial factor. Also, primary data will add value in understanding CRM management practices is SACCOS as well as in informal financial institutions.