Foreign portfolio investment (FPI) has become an increasingly significant part of the world economy and an important source of funds to support investment not only in developed but also developing countries. Foreign investors enter emerging markets for diversification and also to maximize returns. Financial market theory suggests that, over the long run, higher returns should compensate for the higher risks of emerging market (Tokat, 2004).

Foreign portfolio investment increases the liquidity of commercial banks and domestic capital markets, and can help develop market efficiency as well. As markets become more liquid, as they become deeper and broader, a wider range of investments can be financed. New enterprises, for example, have a greater chance of receiving start-up financing. Savers have more opportunity to invest with the assurance that they will be able to manage their portfolio, or sell their financial securities quickly if they need access to their savings. In this way, liquid markets can also make longer-term investment more attractive (APEC, 2000).

According to Bekaert et al. (2002), foreign portfolio investments (FPI) are reversible and tend to leave as fast as they come in an economy. Due to this, portfolio flows may have a drastic impact on Kenya’s economy and on the value of shares of companies in which foreign investors offload their holdings, hence the stability of the market in general.

An increase in FPI leads to changes in information flow, efficiency and liquidity thereby affecting stock market returns. Volatility or rapid reversal of foreign portfolio flow increases risk and uncertainty in the stock market, leading to high macroeconomic instability. Thus, it affects the value of the firm by pushing stock prices up when they come in, but down when they offload. FPI also affects the net foreign assets in form of foreign currency, hence undermining competitiveness. Sudden and large inflows of FPI lead to exchange rate appreciation and widening current account deficits.

During the past three decades, the relationship between firms’ stock returns and foreign exchange rates have been empirically analysed. Theory explained that a change in the exchange rates would affect a firm’s foreign operation and overall profits which would, in turn, affect its stock prices, depending on the multinational characteristics of the firm. Conversely, a general downward movement of the stock market will motivate investors to seek for better returns elsewhere. This decreases the demand for money, pushing interest rates down, causing further outflow of funds and hence depreciating the currency. While the theoretical explanation was clear, empirical evidence was mixed.

The design of the study was causal as it seeks to test for the existence of cause-and-effect relationships among variables (Cooper and Schindler, 2004). This design is suitable in studies which aim to determine whether a group of variables together influence a given dependant variable (Saunders et al., 2009). The design was suitable for this study as it aimed to establish the effect of foreign portfolio investments on stock returns.

Kenya. The 11 listed commercial banks trade the securities in NSE.

The study used panel financial data over the seven year period (January, 2008 to December, 2014) to find the effect of foreign portfolio equity (sales, purchases and turnover) and exchange rate risk on stock returns of listed commercial banks in Kenya. Regression coefficients were interpreted using the E-views software output. To ensure that enough degrees of freedom in the models to be estimated are available, monthly data covering the entire study period was collected resulting to 7392 observations. The method of data collection was secondary research, which essentially involved reviewing data sources that were collected for some other purpose than the study at hand. Thus, all the relevant data for this study were available in secondary form. The main sources of data were: Central Bank of Kenya, Capital markets Authority, Nairobi Securities Exchanges and Kenya Bureaus of Statistics.

Justification for use of panel data approach

Panel data is also called pooled or combined data since there are elements of both time series and cross section data. According to Damodar and Sangeetha (2007), panel data has a number of advantages. First, since panel data relate to individuals e.g. firms over time, there is bound to be heterogeneity in these units. The technique of panel data estimation takes such heterogeneity explicitly into account by allowing for individual specific variables. Secondly, by combining time series of cross section observations, panel data give more informative data, more variability, less collinearity among variables, more degrees of freedom and more efficiency. Thirdly, by making data available for several units, panel data can minimise the bias that might result if the study aggregate individuals into broad aggregates. These advantages enrich panel data empirical analysis in ways that may not be possible if only cross-section or time series data is used, hence the use of panel data in this study.

Descriptive statistics was essential in determining the statistical properties of the model so as to select the proper functional form of the estimable model. Therefore the study sought to determine the spread of the data which included calculating for the mean, standard deviation, standard errors, maximum and minimum values of the variables overtime. This also involved finding correlation matrix so as to check which variables were highly correlated so as to avoid the problem of multi-collinearity which is a common problem in time series data.

A unit root test was carried in this study to examine stationarity of variables because it used panel data which combined both cross-sectional and time series information. A variable is said to be stationary if it displays mean-reverting behaviour implying that its mean remains constant over time (Hlouska and Wagner, 2005). Any regression with non-stationary variables is invalid and hence, any time series application must start with testing stationarity of the data (Charito, 2010). This study used Levin, Lin and Chu unit root test to examine stationarity. Levin, Lin and Chu suggested the following hypothesis:

H1 = each time series is stationary

Choice of model: Testing for the validity of the fixed effects model

In the case of commercial banks, the Hausman test had a chi square statistic of 0.000000 with an insignificant probability value of 1.0000 meaning that the study should reject the fixed effect model in favour of the random effects model as presented in Table 1.  The results from panel estimation output for the effect of foreign portfolio equity and exchange rate risk on stock returns of listed commercial banks in Kenya are shown in the Table 2. 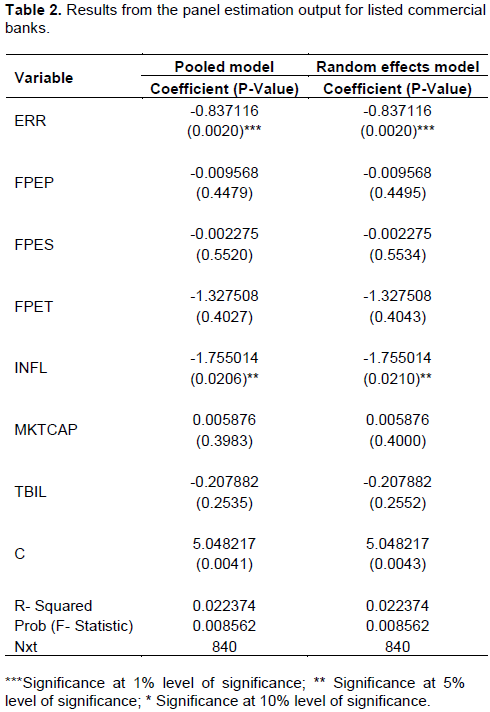 The results for listed commercial banks when tested independently showed varying findings. Foreign portfolio equity sales had a coefficient -0.0022 and an insignificant probability value of 0.5534 for commercial banks. The results showed that foreign portfolio equity sales do not affect stock returns. The results are in support the work of Meurer (2006) who studied the behaviour shown by international investors in the Brazilian stock market. Meurer found out that portfolio flows are higher when the index is low, and the outflows are higher when the index is high, showing that portfolio investors are trying to operate in the opposite way with respect to the market, buying stocks when prices are low and selling when prices are high, chasing profitable opportunities.

Foreign portfolio equity purchases had a coefficient of -0.0095 and an insignificant probability value of 0.4495. The results are statistically insignificant meaning that foreign portfolio equity purchases for commercial banks do not affect stock returns. The results contradicted with the work of Luciana et al. (2010) who examined the relationship between stock returns and foreign investment in Brazil. They concluded that the inflows of foreign investment boosted the returns from 1995 to 2005. This suggested that positive feedback trading played a role, and that the market promptly assimilated the relevant new information that arrived.

Foreign portfolio equity turnover had a coefficient of -1.327 and a probability value of 0.4043 for commercial banks and a coefficient of -0.5559 which is statistically insignificant. Therefore, foreign portfolio equity turnover do not affect stock returns of both commercial banks. The results were not consistent with the work of Griffin et al. (2004) who used daily data on equity flows for nine emerging market countries and found that equity flows are positively related to host country stock returns as well as market performance abroad.

Exchange rate risk had a significant negative coefficient of -0.8371 with a P- value of 0.0020 for banking institution and negative coefficient of -0.6023 with a significant P- Value of 0.0673 for non- commercial banks. The results are statistically significant at one percent level of significance for commercial banks. The banks’ exposure to exchange rate risk has grown in importance due to the continuing expansion of foreign currency business, greater variability of exchange rates, and increase in foreign exchange deposits and foreign borrowing in the Kenyan banking sector. The findings are in line with the work done by Muller and Verschoor (2007). Muller and Verschoor (2007) examined the relationship between individual Asian firm’s stock returns and fluctuations in foreign exchange rates. Among 3634 firms from Hong Kong, Indonesia, South Korea, Malaysia, Philippine, Singapore and Thailand, 25 percent experienced economically significant exposure effects to the US dollar, and 22.5 percent to the Japanese yen for the period of January 1993 to January 2003. Reviewing the empirical literature, previous researchers investigated the effect of both contemporaneous and lagged exchange rate changes on current stock returns.

Treasury bills rate had insignificant negative coefficient of -0.2078 with a P-value of 0.2552 in relation to stock returns indicating that treasury bills rate do not affect the stock returns of commercial banks. The findings support the work done by Joseph and Vezos (2006) who investigated the impact of interest rates changes on US bank's stock returns. Joseph and Vezos (2006) study employed an Exponential Generalised Autoregressive Conditional Heteroscedastic model to account for the Autoregressive Conditional Heteroscedastic (ARCH) effects in daily returns instead of standard ordinary Least Square  estimation  methods  with   the   result   that   the presence of ARCH effects would had affected estimation efficiency.

The results suggested that the market return accounted for most of the variation in stock returns at both the individual bank and portfolio levels; and the degree of the sensitivity of the stock returns to interest rate changes was not very pronounced despite the use of high frequency data.

Summary of the findings

The study recommended management of foreign equity flows in Kenya’s financial sector through some non-radical interventions such as building of reserves by commercial banks to guard against reversals. The government of Kenya should enhance stability of macroeconomic factors such as foreign exchange rate through monetary policy as they affect the performance of securities exchange hence stock returns.

The authors would like to express their sincere gratitude to their supervisors; Dr. Lawrence Kibet and Dr. Andrew Nyang’au for the invaluable advice, constructive comments and for the excellent and supportive supervision of the authors Thesis. The time they took reading and giving advice is much appreciated. May God richly bless them beyond measure.