The selection of resistance is inevitable whenever chemotherapy is necessary for pathogen control. Notably, Plasmodium falciparum has developed multifaceted means to overcome the toxicity of nearly all antimalarial medicines. To bypass this challenge, not only should novel drugs be developed, but the resistance mechanisms to new and existing drugs need should be fully explored. Pyronaridine is a companion drug in Pyramax®, a blend of artesunate (ASN)-pyronaridine (PRD) which is the WHO prequalified alternative for malaria treatment in the African setting. However, half-life mismatch predisposes the PRD to swift emergence of resistance especially in high malaria transmission settings. However, there are no well-characterized PRD-resistant parasite lines. Previously, stable PRD- resistant P. berghei ANKA lines were selected by in vivo drug pressure and preliminary results showed cross-resistance with quinolines, therefore, hypothetically the activity of PRD and chloroquine or other quinolines may be comparable, hence, the resistance mechanisms may be parallel. Consequently, genetic polymorphisms and expression profiles of PbMDR-1 that could be associated with pyronaridine resistance were examined by PCR amplification, sequencing and transcript quantification by RT-qPCR. The transcripts level increased during resistance selection while translated PbMDR-1 sequence alignment of PRD-sensitive and PRD-resistant was the same, the expression may be linked to PRD resistance but not mutations.
Key words: Quinolines, malaria, Pyronaridine, Pyramax®, resistance, expression, MDR-1 gene.

Malaria is one of the most devastating infectious diseases faced by the humanity in the 21st  century. Over the past two decades, numerous strains of Plasmodium falciparum have developed resistance  to  nearly  all  anti-malarial drugs presented for clinical treatment of malaria illness (Hanboonkunupakarn and White, 2015; Menard and Dondorp, 2017).This development has prompted a quest for new effective anti-malarial compounds with the least side effects (Tang et al., 2020). One such strategy for plummeting the malaria prevalence is the usage of twin- or triple-anti-malarial drug combinations, which is thought to protect each drug from the development of resistance and reduce the overall transmission of malaria (Dipanjan et al., 2017; Tse et al., 2019; Mishra et al., 2017). In the last 20 years, over 60 countries and territories have officially adopted artemisinin-based combination therapy (ACT) for the treatment of falciparum malaria (WHO, 2017). The artemisinin derivatives cause a rapid and effective reduction in parasite biomass as well as gametocyte carriage, while the partner drug, which has a longer duration of action, achieves effective clinical and parasitological cure. Despite evaluation of  different forms of ACT (Henrich et al., 2014; Mishra et al., 2017), clinical failures or at least longer parasite clearance times have been described in western Thailand, southern Myanmar, and possibly in the Vietnam and Cambodia (Kyaw et al., 2013; Hien et al., 2012). This emergence of parasite resistance to some forms of ACT indicates that novel compounds and combinations must be discovered and developed (Ouji et al., 2018).
To  overcome drug resistance challenge, several forms of Artemisinin Combinational Therapies (ACTs) have been evaluated and now the currently WHO prequalified combination therapy, PRD/ASN (Ashley and Phyo, 2018; Tse et al., 2019; Henrich et al., 2014), which deployment is under a pharmacovigilance system in countries that may consider the drug in their national treatment guidelines (WHO, 2020). Pyronaridine (PRD) is the bis-mannich base, an analog of amodiaquine and like lumefantrine, it has been found to act through the inhibition of β-haematin formation although the mechanisms remain unclear (Chang et al., 1992; Croft et al., 2012).  Recently, attention has been renewed in pyronaridine as a likely partner for use in artemisinin-based combination therapy (ACT) for malaria treatment (Croft et al., 2012; Tse et al., 2019). Indeed, PRD is highly effective against CQ-sensitive and CQ resistant parasites (Gupta et al., 2002; Vivas et al., 2008). Although PRD has not been commercially available as monotherapy or extensively deployed outside China, the in vitro sensitivity to this drug decreased in China between 1988 and 1995, suggested the emergence of PRD resistance (Croft et al., 2012). Pyronaridine resistance has previously been selected in Plasmodium berghei and Plasmodium yoelii (Croft et al., 2012; Kimani et al., 2014; Peters and Robinson, 1992); however, the molecular organization of the phenotype was not investigated. Pyramax® (PRD/ASN), remains active against widespread Chloroquine (CQ) and Sufadoxine-Pyrimethamine    (SP)     drug-resistant     P.    falciparum clearance of malaria infection, studies indicate that use of drug combination with mismatched pharmacokinetics does not prevent selection of the resistance against long-acting drug (Hastings and Hodel, 2014; Li and Hickman, 2015). Artesunate is a short-acting artemisinin derivative with half-life of less than 2 h, while PRD is long-acting with half- life of 16 to 17days (Park and Pradeep, 2010).
Indeed, PRD which is left trailing in sub-therapeutic doses within the body provides strong selection pressure for fast resistance emergence. Thus the need to understand the mechanism of PRD resistance towards the elucidation of molecular surveillance and health policy tools before or during drug use.
Single and multiple mutations, elevated transcript profiles and increased copy numbers of the P. falciparum multidrug resistance gene 1 (Pf PbMDR-1) have been linked with most antimalarial drug resistance in P. falciparum (Kiboi et al., 2014; Pradines et al., 2010; Tang et al., 2020). Therefore, to evaluate the role of point mutation and expression profiles in antimalarial pyronaridine resistance, we used previously generated stable PRD- resistant P. berghei ANKA lines by in vivo drug pressure (Kimani et al., 2014). Documented studies hypothesize that PRD mode of action may be comparable to that of CQ or other quinolines drug; consequently, they may share similar modes of action and resistance mechanisms (Dorn et al., 1998; Hanboonkunupakarn and White, 2015). As a result, the goal of this study is to identify genetic polymorphisms and expression profiles that could be associated with PRD resistance in selected genes associated with quinoline or any other anti-malarial drugs- preliminarily the multi-drug resistant gene 1 (MDR-1). This study is aware that the selected gene may not certainly be accompanying PRD resistance, thus proposes employment of whole-genome shotgun (WGS) sequencing approach and whole transcriptome profiling (WTP) of the dilution cloned resistant parasite using next sequencing generation sequencer (Illumina) to identify novel genes and copy number variation that may have accumulated during the drug selection process.

Previously, stable PRD- resistant P. berghei ANKA lines were selected by in vivo drug pressure (Figure 1a). The fastest growing clone of PRD resistant line (PRDR) was selected and subjected to drug sensitivity profiles (Table 1, Figure 1b). Subsequently, the best growing clone with high resistance profile was considered for  the  evaluation of genetic polymorphism and quantification of transcripts. Then the MDR-1 coding sequence of both PRD-Sensitive and PRDR clones were amplified and sequenced (Supplementary Figure S1). To explore the potential modulatory and compensatory role of MDR-1, the mRNA transcript level was measured. Consequently, these results demonstrated that the transcripts level increased during selection of pyronaridine resistance (Figure 2), while the translated PbMDR-1sequence alignment of PRD-sensitive and PRD-resistant was 100% identical (Supplementary Figure S2). Consistence with part of in vivo results, Pradine et al. reported the absence of association between pyronaridine in vitro responses and polymorphisms in genes involved in quinoline resistance in Plasmodium falciparum (Pradines et al., 2010).
The global dissemination of drug-resistant P. falciparum is spurring intense efforts to implement artemisinin (ART)–based combination therapies for malaria, including ASN/PRD. Nevertheless, resistance to at least one component of some forms of ACT currently in clinical use has been documented, and it is feared that ACT will gradually lose its clinical efficacy due to widespread use. Individual P. falciparum parasites with longer clearance times have been described in Cambodia (Rogers et al., 2009).
The biggest challenge at present is genetic elasticity and high frequency of human malaria parasite P. falciparum to develop resistance to structurally and mechanistically related and unrelated drugs (accelerated resistance to multiple drugs, ARMD) (Rathod et al., 1997), ARMD is characterized by the ability of a strain to generate a drug-resistant clone when put under drug pressure. This results from the high mutation  rate  during parasite multiplication. The goal of the present study was to investigate the role of multidrug resistance gene -1 which is known to be associated with reduced quinoline susceptibility in modulating PRD resistance. Previously, PRD resistance line was developed for over a period of six months and cloned the parasite which was highly growing and with the highest resistance; however, the mechanisms underlying this resistance was never investigated (Kimani et al., 2014). 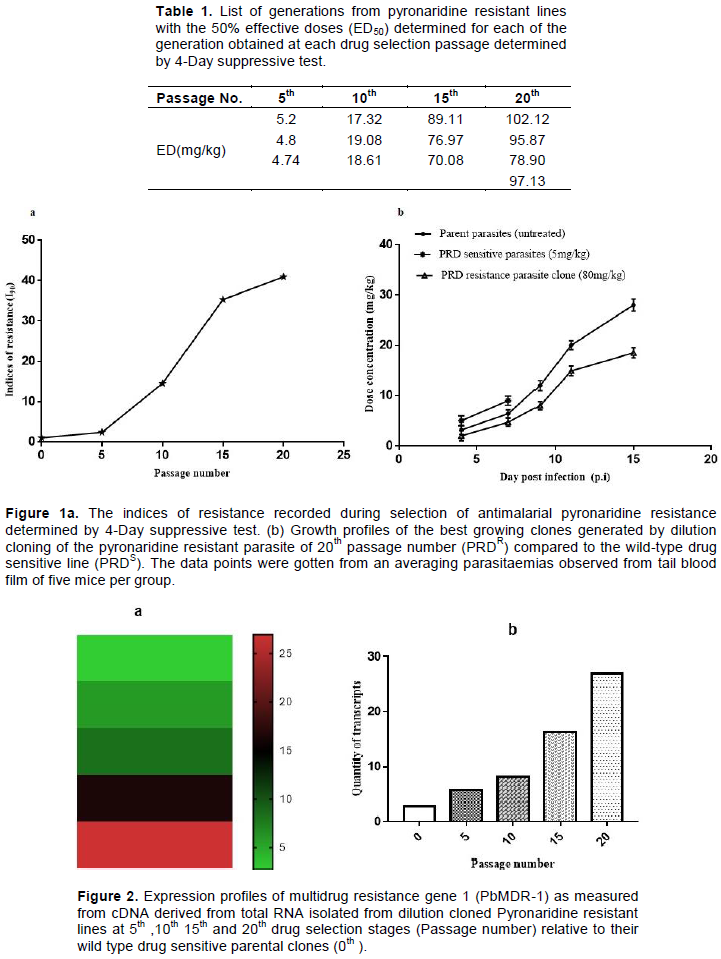 It has been proposed that the selective pressure for resistance to PRD-ASN combinations would be exerted by the longer-acting PRD component. The mechanism by which resistance to pyronaridine develops is unknown, but may be due to a direct effect on the pyronaridine mechanism of action or modulation of targeted gene. For instance, Wu et al. (1988) described an increase in the number of food vacuoles in trophozoites from a pyronaridine-resistant P. berghei (RP) line, some of which were fusing. There was also a marked reduction in the digestive food vesicles containing malaria pigment granules for both trophozoites and schizonts and typical hemozoin grains were not formed in the pyronaridine-resistant parasites (Auparakkitanon et al., 2006; Wu et al., 1988). These and other ultra-structural differences suggested that resistance may be due to a direct effect on the pyronaridine mechanism of action. Another study by Li et al., found over-expression of a 54 kDa protein in a pyronaridine-resistant strain of P. berghei (ANKA) (Li et al., 1995). The protein was localized mainly in the cytoplasm of erythrocytic stage trophozoites, schizonts and merozoites and less commonly in the cytoplasm of infected erythrocytes(Li et al., 1995). Interestingly, a 54 kDa protein is also expressed in chloroquine-resistant P. berghei (ANKA) suggesting a common effect, though whether this is related to resistance development remains unknown (Li et al., 1995). Notably, Qi et al. proposed that antimalarial pyronaridine could be an inhibitor of P-glycoprotein mediated multidrug resistance in tumor cells (Qi et al.,  2002; Qi et al., 2004).
The P. falciparum multidrug (MDR) resistance protein (PfMDR-1) has been implicated in altering parasite susceptibility to a variety of currently available antimalarial drugs. Point mutations in PfMDR-1 have been associated with changes in parasite susceptibility to Chloroquine, Quinine, Mefloquine, and Artemesinin derivatives in both laboratory lines and clinical isolates; however, these mutations have limited use as molecular markers (Duraisingh and Cowman, 2005; Woodrow and Krishna, 2006).

Comparison of coding region of parent strain and pyronaridine resistant line revealed that the nucleotide and translated protein sequence of the PbMDR-1 was identical. Thus, point mutation in MDR-1 was not involved in the generation of pyronaridine resistance. However, the expression levels of the gene increased in tandem with the increase of the resistance implying that the expression profile may be linked to PRD resistance.

The  research  was  supported   by   the   Government  of Kenya through National Commission of Science, Technology and Innovation award to SKK grant NCST/ST&I/RCD/4th Call M.Sc./196.