This work is focused on the design and testing of a co-current fixed bed gasifier with two air injections. The electric power of the gasifier was set at 10 kW. The design is based on experimental data relating to specific gas production rate, engine power efficiencies, biomass flow rate, pyrolysis and reduction time etc. The gasification tests were conducted with rice husk, hulls of balanites aegyptiaca and charcoal. The realized gasifier has a diameter of the grid and a total height of 14 and 87 cm, respectively. A mass of 6.7, 17.9 and 10.8 kg were respectively gasified for rice husk, hulls of balanites aegyptiaca and charcoal. The highest temperatures (968°C in the oxidation zone) were obtained during charcoal gasification with a reaction time of 244 min. the temperature of 625°C in the oxidation zone and a reaction time of 114 min were obtained for the gasification of the hulls of balanites.

The socio-economic context of the African countries is characterized by a strong demography and low per capita income, particularly for the countries of the West African Economic and Monetary Union (UEMOA). The UEMOA countries must ensure a strong economic growth in  order to achieve a sustainable development of their populations. The achievement of such economic growth requires the increase of productivity particularly in the primary or even secondary sector. It is in this context that access to modern energy services  such  as  electricity  is essential because it helps to promote access to resources (water ...) necessary for the development of all sectors of the economy. Indeed, the rate of access to electricity in rural and urban areas of the UEMOA area is very low. In addition to weak economic growth, the lack of access to modern energy services such as electricity results in the predominance of traditional biomass which accounts for almost 80% of primary energy supply compared to 15% for hydrocarbons and only 5% for electricity (UEMOA, 2006). This is reflected by the deforestation aggravation, hence the need to find sustainable alternative sources and to modernize the biomass use as energy. Many efforts have to be made by African countries in this field. Indeed, biofuel generates 4% of electricity in Europe against the zero in Africa in 2017 (IEA, 2018). In such a context, the energy recovered from agriculture residues can make a significant contribution to improve the access to modern energy services. In addition to agricultural residues, forestry residues are recommended by Long et al. (2013) to increase the biomass potential to achieve a secure raw material supply for biomass energy conversion technology like gasification. Gasification is the production of a gaseous fuel from a solid fuel. The gas produced during the gasification can be used for heat and power production.
The development of this technology in the UEMOA zone requires on one hand a fully control of the techniques of design and realization of gasifiers and on the other hand an improvement of the performances of the process. The major difficulty related to the control of the process of gasification of biomass is related to the presence of tars in the gas. Indeed, the gas is generally produced with a high content of tar and dust. Gas treatment is needed before most applications, especially in an internal combustion engine. For these types of applications oriented towards electric and power production scrubbing and filtering of the gas are essentials to avoid embedding in the engine pipes. The additional cost of gas cleaning involves the increase of the production cost per kilowatt-hour (kWh) as well as the investment cost. The gasification technology still needs to be improved in order to compete in the energy market (Anjireddy and Sastry, 2011). It should be noted that the co-current type fixed-bed gasifier produces the least tar compared to other types of gasifiers, (Milne et al., 1998). This justifies the choice of this type of gasifier for the present study. It should also be noted that the design of a gasifier plays a crucial role in the efficiency of gasification, the gas heating value and the tars formation (Cao et al., 2006). For example, the injection of secondary air at the level of the biomass feed can lead to a reduction up to 88.7% in mass of total tars content (Pan et al., 1999); hence the importance of providing a secondary air supply on the gasifier. The objective of the work is to design, build and test a co-current type fixed bed   gasifier   equipped   with   a   secondary  air  supply.
Agricultural and forestry residues such as rice husk and balanites aegyptiaca hulls were tested. The gasification of wood charcoal was also tested during the works.

Design method
The gasifier is composed of a drying zone, a pyrolysis zone, oxidation zone and a reduction zone (Figure 1). A throat has also been provided in the oxidation zone to allow better thermal cracking of the tars. To dimension the Imbert gasifier, we can proceed as follows: 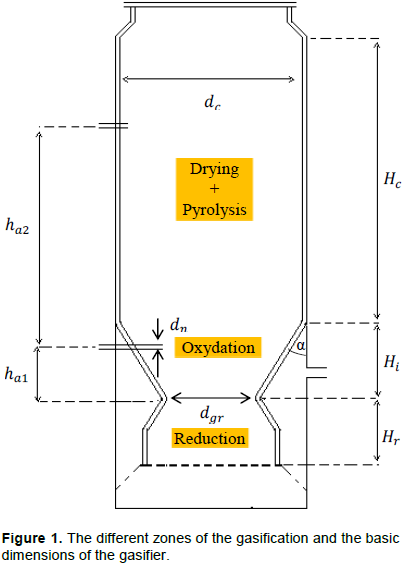 (1) Set the nominal electrical power required ( ) and the gasifying agent;
(2) Choose the type of fuel (wood, rice husk, charcoal…), the gas lower heating value (LHV) and the efficiency of the electric conversion of the gas by the engine ( );
(3) Determine the appropriate parameters for sizing the gasifier using mathematical formulas, interpolation or experimental data.
The appropriate parameters for the design of the Imbert generator are: the throat diameter ( ) located above the reduction zone, the tuyeres diameter ( ), the diameter of the charging zone (drying and pyrolysis) ( ), the diameter of the nozzles ( ), the height of the charging zone ( ), the height of the inclination zone ( ), the height of the reduction zone ( ), the position of the tuyeres ( ), the inclination angle of the throat ( ).
Choice of gasifier data
Choice of electric power and gasifying agent
The thermal power of the gasifier is of the order of 30 kW. This will meet the needs of low mechanical power ( ) of the order of 10 kW. The use of air as a gasifying agent is inexpensive and the produced gas has a low LHV (varying between 3 and 5 MJ/Nm3) but sufficient for the electrical and thermal production. Thus, air was chosen as a gasifying agent for this study.
Choice of biomass, LHVof the gas and electrical efficiency of gasification
The gasifier is intended to be fed by a wide range of biomass, particularly agroforestry residues (rice husk and hulls of egyptiacabalanites). The HHV of the gas depends on the nature of the biomass used. A low HHV of the gas must be chosen for the gasifier sizing thus the targeted electrical power can be achieved even though the biomass produced gas has a very low calorific content. A gas HHV of 3 MJ/Nm3 was considered in this study. The electrical efficiency, which represents the ratio of the electric power to the thermal power of the biomass, depends on the performance of the device. Electrical efficiencies ranging from 25 to 27% have been reported in the literature (Henriksen et al., 2006, Mukunda et al., 1994). The electrical efficiency of 25% was considered in this study.
Determination of appropriate parameters
Gas flow 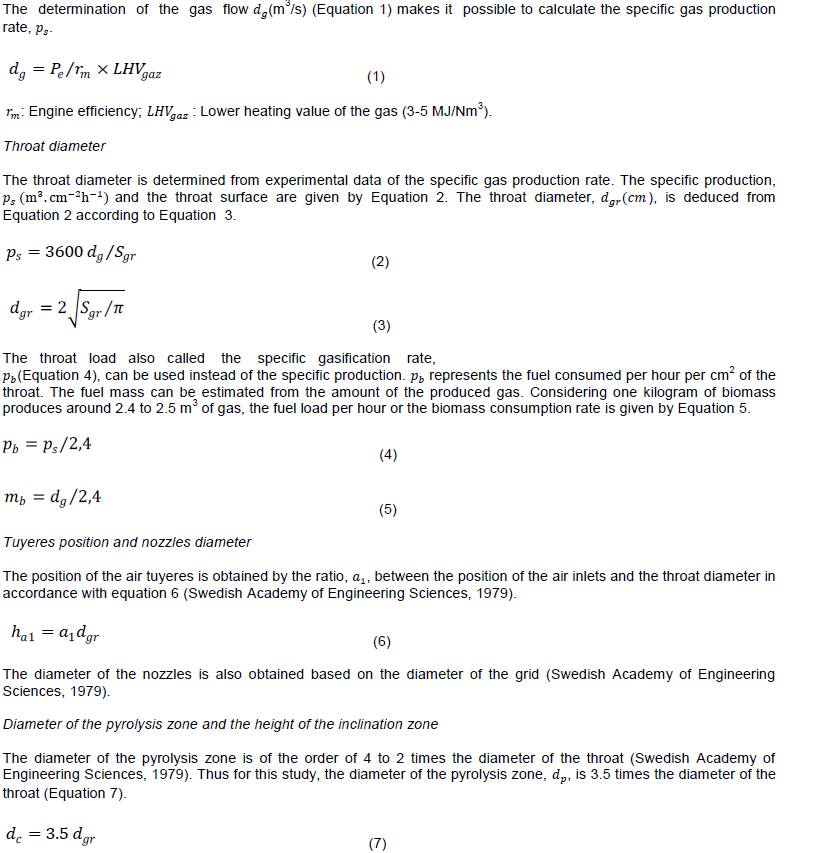 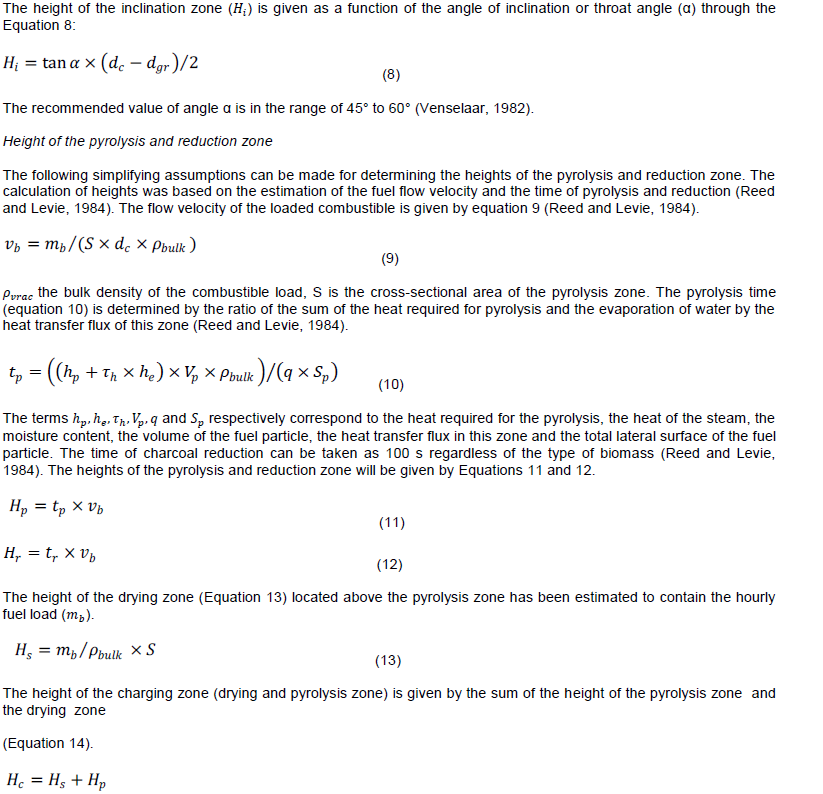 The gasifier dimensions
The data used are summarized in Table 1. The typical value of the specific gas production rate ( ) is 0.9  for an Imbert-type gasifier (Brandini, 1983). Thus the value of 0.9  was considered in this study. The height, , between the primary and secondary air tuyeres has been estimated so that the secondary air tuyeres will be placed at the fuel bed top. The dimensions considered for the gasifier realization are different from those estimated in order to take into account the technical capacity and the dimension of the available materials. The used values for the gasifier realization and theoretical estimated values are summarised in Table 2.  The gasifier is shorter, but has a slightly larger reactive zone than the gasifier designed on the basis of calculations. The image of the gasifier is shown in Figure 3.
Results of gasification tests
The evolution of the temperature within the gasifier according to the time for each type of biomass used is given in Figure 4. Temperature rapid increase is observed during the gasification of agricultural residues (balanites hulls and rice husks) which is due to the rapid combustion at the primary air inlet at the beginning of the gasification trials. The temperatures dropped significantly after the reactor was closed during the gasification of raw agricultural residues. Thus, the oxidation front situated at the hottest point of the reactor stabilizes near the primary air inlet (at ) in the case of balanites hulls and charcoal. Gas production, which is indicated by gas ignition at the flare, occurs rapidly (less than 5 min after reactor closure) in the case of balanites hulls. 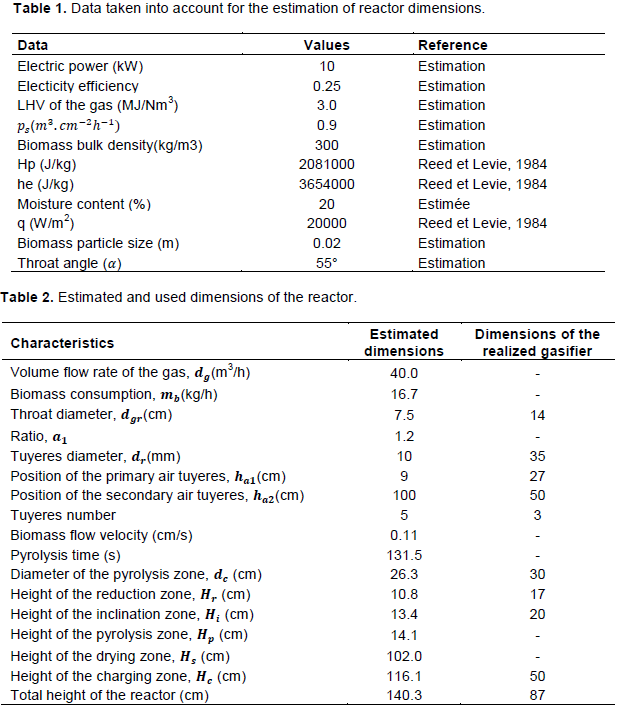 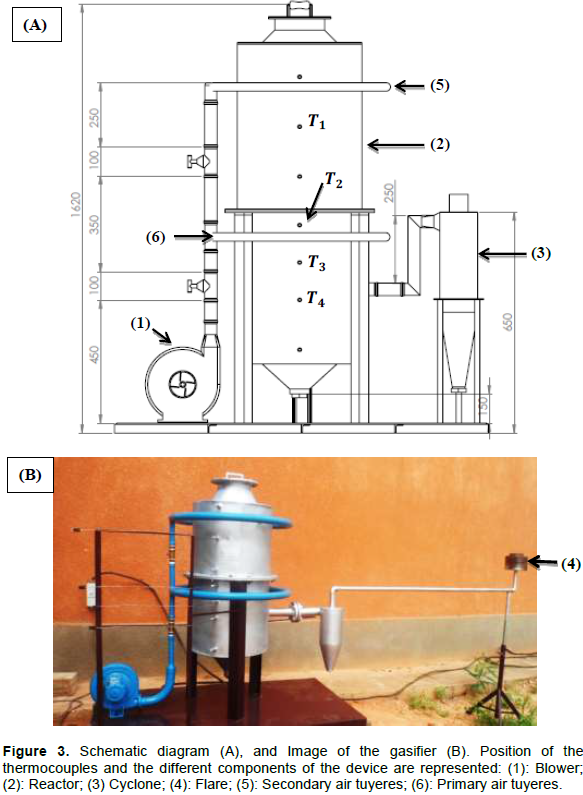 A co-current type fixed bed gasifier has been designed, constructed and tested in the present study. The mechanical power of 10 kW was targeted which led to an estimated biomass consumption of 16.7 kg/h and a throat diameter of 7.5 cm. The produced gasifier has a larger reactive zone than  the  gasifier  designed  with  a throat diameter of 14 cm. However, a low biomass consumption of 2.2, 4.8 and 7.2 was obtained during the gasification of charcoal, rice husks and balanites hulls respectively. This is due to a low air flow hence the need to increase the power of the blower and increase the number of air inlets from 3 to 5 at the oxidation zone of the gasifier. A flowing problem of biomass was observed after the gasification test of the rice husk. This did not allow the production of gas during the gasification of the rice husk hence the need to design and install an agitator system of biomass in the upper part of the gasifier.