Bacterial communities are actively involved in composting process but the environment within the compost influences their diversity, abundance and succession. In this study, the authors investigated the bacterial communities in tropical crop waste compost using pyrosequencing. Municipal crop wastes from the tropics (Uganda) were composted under four different low-technology methods. Samples were collected from the early thermophilic, late thermophilic, and mesophilic phases, and from mature compost. Pyrosequencing of the amplified variable V4 region of the 16s rDNA generated over 110 000 sequences.  Chao1 and cluster analysis at 3% dissimilarity showed that bacterial community richness declined during the composting process. The community was dominated by a few bacterial taxa during the thermophilic phases. Species evenness increased as compost progressed to maturity despite a decline in the number of taxa over the successional progression. Bacterial community diversity, abundance and succession changed with the composting method. This pattern of diversity may be attributed to competition and selection during the microbial succession. A total of 22 phyla and 513 genera were identified from all the methods in the entire composting process. The most abundant phyla were Proteobacteria, Firmicutes, Bacteriodes and Actinobacteria. Pyrosequencing provided more information on compost bacterial community diversity and abundance than previously used molecular methods. Several novel bacteria existing in tropical crop waste compost remained unclassified.

The composting process is primarily driven by micro-organisms and understanding their succession, ecology, characteristics, diversity and abundance is important for its optimization as well as the understanding of nutrient cycling. Microorganisms involved in composting are primarily bacteria and fungi (Riddech et al., 2002), which have variable roles, functions and ability. Therefore, revealing the identity, nature and functions of the organisms is a prerequisite for determining pathways of the composting process and the quality of mature compost. Composting has been widely used in management of organic wastes. In Uganda, about 5000 metric tons of municipal solid waste (MSW) was generated in Kampala city alone per month, which can be composted. MSW compost has a long residual effect in soil than only animal waste compost (Zing et al., 2017). The quantity of waste generated in the urban is increasing with population. Han et al. (2018) reported a positive linear relationship between waste generation amount and population size (R2â€¯=â€¯0.9405). Most of the MSW composting studies in the tropics have concentrated on physicochemical properties of the process and product but there is relatively little knowledge available on microbial characteristics. A high throughput method like pyrosequencing would be more suitable to elucidate the microbial community during MSW composting. Pyrosequencing provides massive parallel sequence based taxon identification compared with previously used molecular techniques (Shendure and Ji, 2009; MacLean et al., 2009; Fullwood et al., 2009). It has revealed more bacterial diversity in soil (Roesch et al., 2007; Acosta-Martínez et al., 2008; Jones et al., 2009) and during composting (de Gannets et al., 2013). Therefore, it is plausible that higher bacterial richness in compost than currently known will be revealed through pyrosequencing. The diversity, abundance and succession of bacteria community in the tropical mixed wastes such as municipal crop wastes composting ecology is currently to a large extent unexplored. The composting process can be divided into four phases: initial mesophilic phase (<40°C), followed by a thermophilic phase (>40°C) before dropping to a second mesophilic phase and finally the compost maturing phase. Bacterial and fungal communities were noted to dynamically relate to the functional composting progress phases (Xi et al., 2016; Zhao et al., 2016). Each of these phases is characterized by different compost ecological conditions such as temperature, pH and nutrient concentrations, which may affect microbial community structure. Bacteria use a broad range of enzymes to degrade available organic substrates such as soluble carbohydrates, proteins and complex lignin, chitin, polyphenols and cellulose.
Although, there have been studies on bacteria community in composting elsewhere, few of these studies have traced and described the microbial community during an entire composting process. For example, Takaku et al. (2006) used DGGE and PCR amplified 16S rDNA to study microbial community during composting of food garbage and rice hulls in Japan. Results showed change in microbial community between composting stages. A total of 33 DGGE bands which were identified belong to phyla Proteobacteria, Firmicutes, Bacteroidetes and Actinomycetes. In a related study, high diversity of Formicates and Bacteroidetes was observed during thermophilic phased during composting of solid agricultural wastes (Song et al., 2014). Culture-method was noted to underestimate the diversity of microorganisms during the composting cycles as compared to sequencing of 16S rRNA (Chandna et al., 2013). Earlier, Horisawa et al. (2008) determined bacteria succession during decomposition of garbage but in a batch-fed garbage decomposer and showed that microbial community in compost were similar at each stage of composting irrespective of the environmental conditions. Taiwo and Oso (2004) and Rebollido et al. (2008) traced microbial succession during composting of organic municipal solid wastes in Nigeria and Cuba, respectively but used the culture methods. There was a higher community of bacteria followed by Actinobacteria and fungi during composting dominated by Bacillus, Streptomyces, Actinomyces, Pseudomonasi and Azospirillum isolates (Rebollido et al., 2008). Bacillus, Streptomycetes and Pseudomonas in addition to faecal coliforms, Seratia and Proteus were the dominant microbial community isolates from pit method composted urban organic wastes (Taiwo and Oso, 2004). Other studies to establish bacteria community during composting process used kitchen waste, sewage sludge and source-separated municipal solid or household wastes mainly in temperate climate (Kowalchuk et al., 1999; Peters et al., 2000; Ryckeboer et al., 2003; Connon et al., 2005; Neher et al., 2013; Song et al., 2014). Some studies have concentrated on microbial succession within one phase of the compost process. For example, Danon et al. (2008) studies bacterial community succession in curing compost of sewage sludge and yard wastes from a commercial composting facility in Israel and reported microbial community changes but the dominant phyla were Proteobacteria, Bacteroidetes and Actinobacteria. The objectives of this study were to explore the bacterial community diversity, abundance and succession during composting of tropical MSW in four low-technology composting methods using pyrosequencing of the 16S rDNA V4 region. 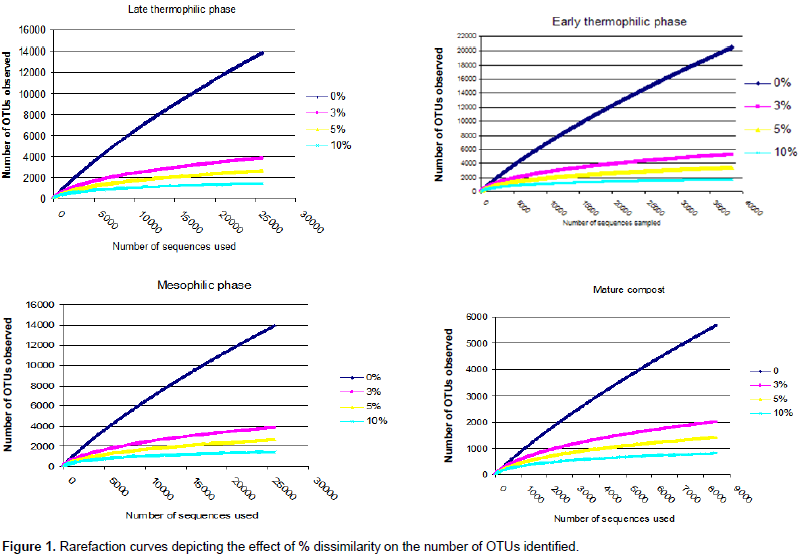 The pit methods generally had the highest richness. The PC method had the highest bacteria diversity as shown by OTUs estimated by rarefaction extrapolation in the early and mesophilic phases. It was followed by the PO method, which had the highest rare faction estimated OTUs in mature compost. On the other hand, AO method had the least bacteria community diversity in the entire composting process except in the late thermophilic phase (Table 1). The clusters and Chao 1 values followed similar pattern except in the early thermophilic phase. Species richness decreased as the evenness increased during composting in all methods as shown by the H' index (Table 1). The AO method had successively increased bacterial diversity as compared to the other methods as compost progressed through maturity.
Proteobacteria, Firmicutes, Bacteriodetes, Actinobacteria and Planctomycetes were the most abundant bacterial phyla throughout the composting process (Table 2). Proteobacteria community abundance was highest during early thermophilic phase, decreased in late thermophilic and mesophilic phases but later increased in mature compost. A similar pattern was observed for Cyanobacteria, Nitrospira, Spirochaetes and Acidobacteria. The abundance of Bacteriodetes increased from the early thermophilic through the mesophilic phases but decreased in mature compost. There wasa similar pattern for TM7, Gemmitimonadates, Deinococcus-Thermus, Chlamydiae and Chloroflexi. The Actinobacteria community increased abundance from 5.1% during thermophilic phase to 8.0% in late thermophilic phase but thereafter decreased successively. Planctomycetes community abundance was nearly consistent during early and late thermophilic phases but later successively increased through compost maturity. The minor phyla (Chlamydiae, Deferribacteres, Chloroflexi, Acidobacteria, Lentisphaerae, Tenericutes, TM7, BRC1, OP1, OD1, Verrucomicrobia, Gemmatimonadates, Deinococcus-Thermus and Spirochaetes) contributed less than 10% to the phyla abundance during all phases of composting. Several sequences remained unclassified with the highest proportions at 38.5 and 26.8% of the sequences from second mesophilic and late thermophilic phases, respectively (Table 2). 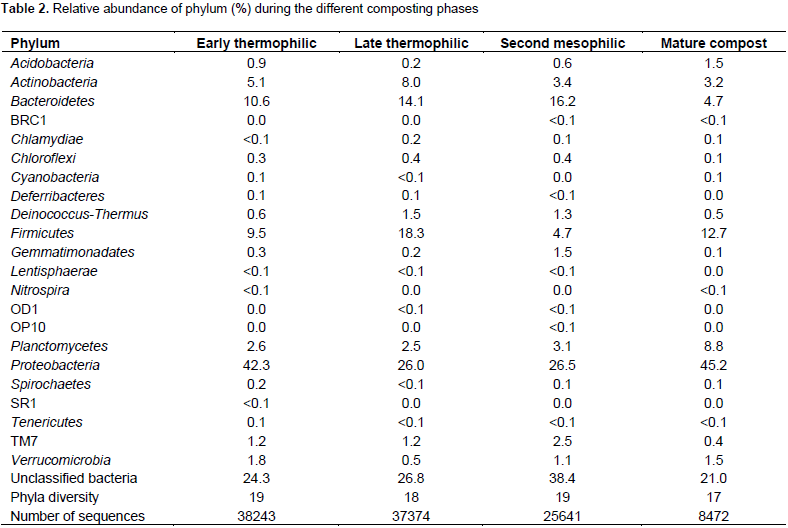 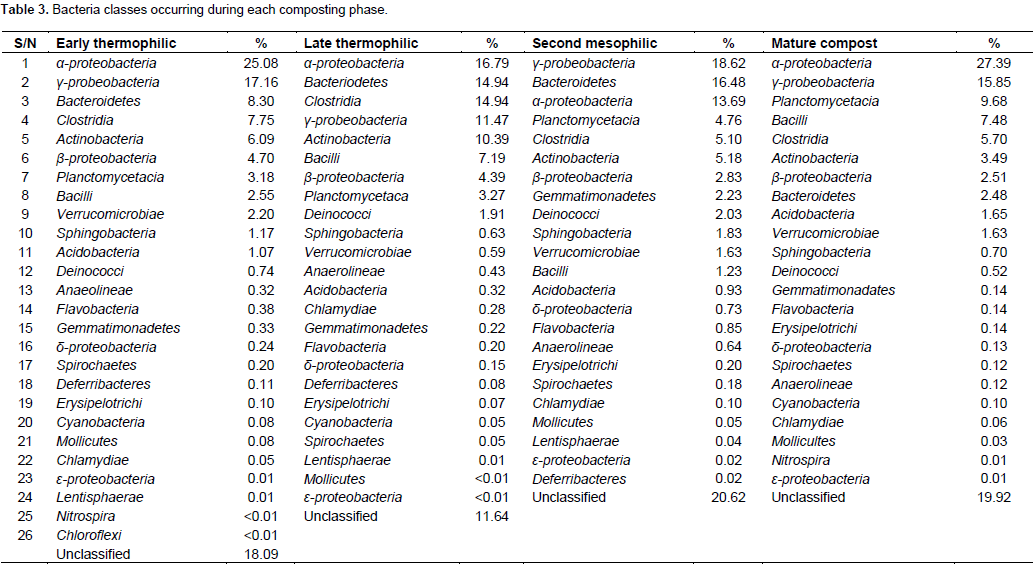 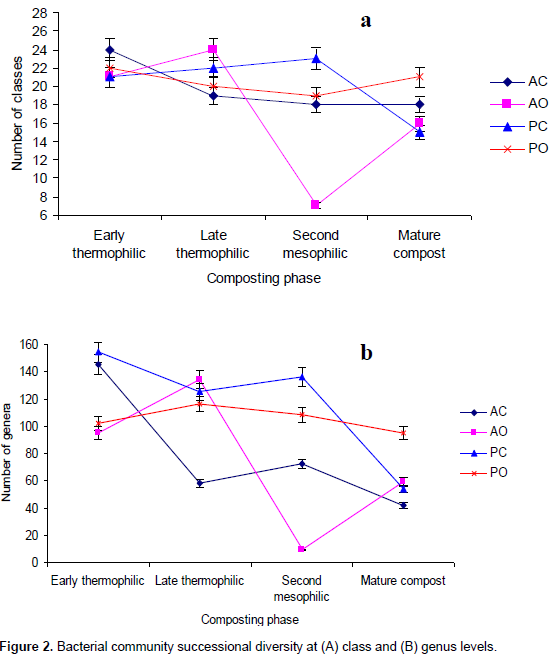 Bacteria succession in different composting methods
Bacterial succession patterns differed significantly depending on the composting methods and phases(p<0.01). For example, in the AC method (Table 2), there was a decrease in abundance of Firmicutes, Proteobacteria, Bacteroidetes and Planctomycetes between early thermophilic phase and mature compost.
However, Proteobacteria dominated the early thermophilic phase and mature compost while Firmicutes and Bacteroidetes were most abundant during late thermophilic and second mesophilic phases, respectively. The minor phyla abundance also successively increased during composting. The minor phyla included Cyanobacteria, Nitrospira, Deferribacteres, Chloroflexi, Chlamydiae, Acinobacteria, Lentisphaerae, Tenericutes, TM7, SR1, BRC1, Verrucomicrobia, Gemmatimonadates, Spirochaetes and Deinococcus-Thermus. For the AO method (Table 2), the abundance increased for Firmicutes and Actinobacteria while it decreased for Proteobacteria, Bacteroidetes and Planctomycetes. For the PC method (Table 2), Proteobacteria Bacteroidetes and Actinobacteria had a successive decline in abundance but it increased for Firmicutes and Planctomyces. There were notable changes in the minor phyla; Acidobacteria and Verrucomicrobia successively increased from 0.1 and 0.4 to 4.2 and 3.4% between early thermophilic phase and mature compost, respectively. For the bacterial succession under the PO method; there was a significant increase in abundance of Proteobacteria, Firmicutes and Planctomycetes and a decrease for Actinonacteria. The minor phyla Verrucomicrobia, TM7 and Acidobacteria were more abundant than Cyanobacteria, Chlamydiae, Chloroflexi, Lentisphaerae, Tenericutes and Gemmatimonadetes.  NMDS analysis gave two convergent solutions after 13 trials, stress value 20.2 and non-linear fit R2 was 0.94 (Figure 3). Temperature, total organic carbon, NH4+ and NO3- explained most of the community variation but pH and total nitrogen were significant factors as well when vector-fitting was permuted 999 times (Table 5). 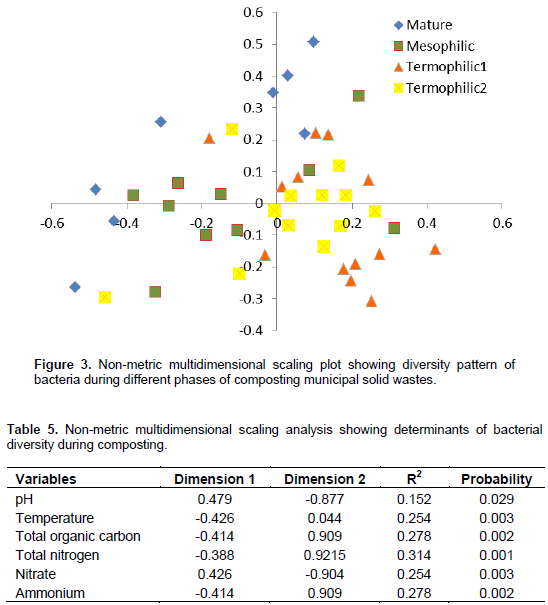 The authors are very grateful to Sida/SAREC for the award of scholarship to the first author. Partial research funding from Swedish Research Council for Environment, Agricultural Sciences and Spatial Planning (FORMAS) and from Carl Tryggers Stiftelse (CTS) is gratefully acknowledged.