Heavy metal pollution is one of the most important problems in Morocco and causes serious effects to humans and animals. The aim of the present study was to evaluate the spatial distribution of heavy metals in Draa Lasfar mine area in Marrakech city and understand the characteristics of the pollution generated by this mine activity. A total of 120 soil samples were collected from Ouled Bou Aicha and Tazakourte along with two soil control samples. The edaphologic soil parameters pH and electrical conductivity (EC) and carbonate content were measured according to standard methods, whilst heavy metals concentration was done by atomic absorption spectroscopy (AAS). Contamination factors (CF) and pollution index (IP) were calculated in order to estimate the anthropogenic contribution of target pollutants determining As, Se, Pb and Zn as the main pollutants in this region. The results show that the polluted areas at the vicinity of the mine, especially two rural communities (Ouled Bou Aicha and Tazakourte) of about 5790 ha, is probably linked to increasing mine activities and the lack of appropriate measures to counteract its effects causing a progressive pollution of soil with heavy metal emissions in this studied region.

The evaluation, mechanism and characteristic of heavy metals pollution near the mine were hotly discussed in recent years all over the world. Environmental pollution by heavy metals which adversely affect soil quality and pose a threat for human health requires a rapid and comprehensive solution. Numerous anthropogenic sources of pollutants can contaminate the soil and water environment, including inputs from waste waters flowing from mines and waste storage, runoff of pesticides from agricultural and or atmospheric deposition (Song et al., 2010). Increasing industrialization has been accompanied throughout the world by the extraction and distribution of mineral substances from their natural deposits. In the process of mining and smelting activities, tailings (heavier and larger particles settled at the bottom of the flotation cell during mining) are directly discharged into natural depressions and consequently, many kinds of risk elements enter the environment, causing serious environ-mental problems resulting in elevated concentrations (Figueroa et al., 2010; Muhammad et al., 2011; Sharma et al., 2007).

In many regions of the world where zinc and lead ores are mined and processed, zinc, cadmium, lead, arsenic, thallium, and iron are transported to the environment (Lee and Kao, 2004; Degeyse et al., 2004; Loureiro et al., 2005). The adverse effects of heavy metals in these areas are connected with their transfer in the trophic chain, from soil through plants to animal and human (Torres and Johnson, 2001). Most human exposure to metals is associated with contaminated groundwater and soils (Aelion and Davis, 2007; El Khalil et al., 2008).

Soil is characterized as a complex and dynamic system. It is constituted by several layers that differ in relation to the physical, chemical, mineralogical and biological nature, which are influenced by the climate and activities of the living organisms. Besides contributing to the maintenance of all forms of life that occur in the terrestrial surface, soil plays an important role in protecting the groundwater acting as a collector filter of organic and inorganic residues, helping in sequestering possible toxic compounds (Sousa et al., 2008).

Excess  heavy metal accumulation  in  soils  is  toxic  to humans and other animals.This present study investigated the issue of Draa Lasfar mine tailings as a potential source of trace elements contamination in adjoining agricultural soils at this mine.

Draa Lasfar mine  involves a deposit of pyrite located 10 km northwest of Marrakech city (Figure 1) that can pose a risk to the environment due to tailings discharges surrounding the mine area (Avila et al., 2012). 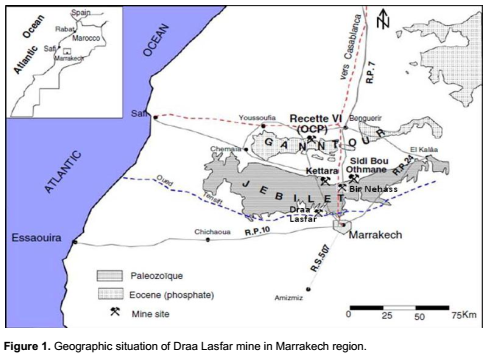 Draa Lasfar mine is located a few hundred meters from the Tensift River, close to two rural communities (Ouled BouAicha and Tazakourte) of about 5790 ha, of which 65% are occupied by farmland (Figure 2). The climate is Mediterranean, bordering between arid and semi arid regime with an average annual precipitation of 231 mm (average of 10 years). Temperatures are characterized by great daily and seasonal variation with an average minimum value of 11.5°C in January and a maximum of 36.8°C in July. 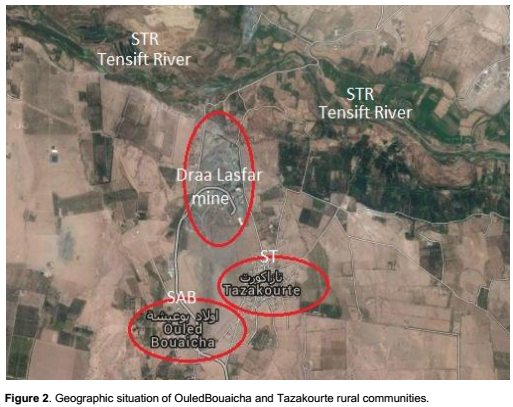 In order to assess the impact of the Draa Lasfar mine on the surrounding environment, a total of 120 soil samples were collected in the vicinity of the mine, covering 230 ha, through 8 sampling lines oriented towards specific receptor media (Tensift river creek, Tazakourte village, Ouledbouaicha village, farms, etc.). Two samples were taken at the other side of Tensift river at 1 km from the mining site as control soils (background) in order to avoid mining contamination.

Samples were taken every 50 m from the upper 20 cm within an area of 100 cm2.The soil samples from the various sampling sites (OuledBouaicha = SOB, Tazakourte = ST and Tensift River =STR) were all taken at a depth of 0 to 20 cm, after removing the first layer of surface soil (2 cm), with a garden shovel cleaned with concentrated nitric acid. Three samples were taken from each sampling site during 12 months. The soil samples were collected into plastic containers, pre-cleaned with concentrated nitric acid to remove any traces of heavy metal contaminant (Brigden et al., 2008).

Soil samples were dried and passed trough a 2-mm sieve. Aliquots of about 1 g were digested with 5 ml of 65% HNO3 in a microwave digestion system for the determination of the HNO3-soluble fraction of heavy metals. The concentrations of Cd, Cu, Pb and Zn were determined by means of a graphite furnace atomic absorption spectrometer (GF-AAS).

Soil pH was measured in soil-H2O suspension (1:2.5, w/w) and electrical conductivity (EC) was measured in a 1:5 soil to water suspension using an HI 9828 Multiparameter portable (HANNA instruments). Organic matter content was determined by the Walkley and Black procedure (Nelson and Sommers, 1982).

Results obtained for the soil pH measurements, revealed that, in general, samples from SOB and ST showed a neutral to alkaline pH ranging from 7.8 to 8.1 similar to control samples.

Low pH values in STR samples were related with heterogeneous deposits of sulphidic residues at mine surroundings, which cause a decrease of the pH by sulphideoxidation and of sulfuric acid formation.

Among the factors influencing the accumulation of nutrients, particle size played a significant role related with this. Fine grained soils often show higher concen-trations of nutrients due to their greater surface-to-volume ratio and enrichment of organic matter (OM) (Wang et al., 2004).

Mean OM contents in studied soils were in the range of 4.7% dry weight in SOB and 6.7% dry weight in STR soil samples. The results show that the anthropogenic contri-bution from discharge of domestic sewage at the Draa Lasfar region was an important source of OM to this mining area. High values of OM content were due to agricultural activities around Tensift River. The organic carbon content (OCC) ranged from 2.7% dw in SOB to 3.9% dw in STR.

Organic carbon concentrations increased in STR, reflecting a corresponding decrease of the soil grain size. The highest organic carbon contents occurred at the soils that had the lowest sand contents and the highest silt and clay contents (Table 1).

Table 3 shows the results of total estimate concen-trations for the following elements in soils: As, Se, Pb and Zn. All the results are expressed in mg/kg.

The concentrations of heavy metals were higher in Tazakourte soil that was identified as hotspots. Heavy metal concentrations in these soils are strongly determined by local geology or anthropogenic influences. The weathering of minerals is one of the major natural sources, while anthropogenic sources include use of fertilizers and herbicides, irrigation and industrial effluent (Bird et al., 2005). In this agricultural area, mining extract activities are likely to be the major contamination sources.

Total As showed higher concentrations in ST with 178.5 ± 42.1 mg/lg. Total Zn also showed similar trends with highest level at the same soils with 890.5 ± 101 mg/kg. The results show an increasing of zinc in the soils by domestic and industrial wastewaters, and agricultural runoff.

The results show significant spatial variations. Compared to the control soil (CS), the contents of other metallic elements show a significant increase. The highest levels were observed in the ST village. 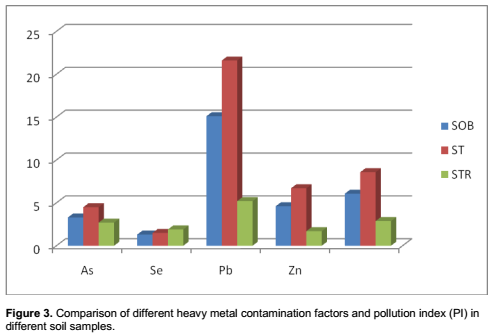 The PI (Table 4) shows that soil samples from SOB and ST villages are highly contaminated with metals since PI values are above the legal limit pollution that is equal to 1, with values ranging from 6.07 and 8.56, respectively (Table 4).

These high metal concentrations in agricultural soils can be justified by the reuse of Draa Lasfar mine wastes for irrigation in this region.

This study introduces an easy method for the assessment of soil heavy metal contamination in mining gathering areas and provides important information about the distribution of four heavy metals (As, Se, Pb and Zn) in Draa Lasfar mine area.

Understanding the degree, scale, and sources of heavy metal contamination is essential for environmental management. It is also important in reducing risks to human health, ensuring food safety, and managing contaminated soil. In future studies, the partition of study areas based on contamination levels should be considered as a research focus. Spatial analysis methods such as spatial overlay must be applied extensively, and human health risk should be seriously considered in partition studies.