Globally, there is an increasing report of bacterial resistance to currently available antibiotics. The urgent need for newer therapeutic modalities was the incentive for the current evaluation of bactericidal and inhibitory effects of methanolic and aqueous extracts of Mitracarpus villosus on selected antibiotic resistant Gram-positive and Gram-negative bacteria. Ten-fold serial dilution was used to test the effects of the extracts. The percentage yield of extractable components was 22% for methanol and 8.3% for water. The minimum inhibitory concentration (MIC) of methanolic extract was 0.001 mg/mL against Streptococcus pyogenes, Enterococcus faecalis, Escherichia coli, Pseudomonas aeruginosa, and Salmonella Typhi showing resistance to antibiotics and 0.01 mg/mL for Staphylococcus aureus, Bacillus subtilis, and Klebsiella pneumoniae while the minimum bactericidal concentration (MBC) was 0.1 mg/mL for all the isolates except S. aureus and E. coli with MBC of 0.01 mg/mL. Similarly, the MIC of aqueous extract was 0.01 mg/mL for S. pyogenes, S. aureus, B. subtilis, and K. pneumoniae; 0.1 mg/mL against S. faecalis and E. coli; 0.001 mg/mL against P. aeruginosa and S. typhi. The MBC of the aqueous extract at 0.1 mg/mL was active against S. pyogenes, S. faecalis, P. aeruginosa, K. pneumonia, and S. typhi; 1.0 mg/mL was active against S. aureus, B. subtilis, and E. coli. Findings from the present study indicate that the extracts of M.  villosus have the potential to be used for treatment and cure of infections caused by selected bacteria. The methanolic extracts show more potent activity. Further study on a larger scale at varied concentrations including a test for potential toxicity in cultured cells are needed to depict their safety profiles before recommendation for inclusion in the antibacterial armamentarium.

A large number of compounds of therapeutic values are traditionally produced from plants that possess antimicrobial activity (Khameneh et al., 2019). Successful defense mechanisms developed by these plants are responsible for the scarcity of infective diseases in those plants (Bolla et al., 2011). A report of Sivananthan (2013)
indicates the potential inhibitory effects of some bioactive compounds on the life processes of disease-causing bacteria, either alone or in combination with other agents. Several studies have explored the potential of medicinal plant administration for the treatment of bacterial related infections (Irobi and Daramola, 1994; Panda, 2014; Martins and Nunez, 2015). However, most of these published reports are from countries where traditional medicines for curative treatment of diverse diseases are frequently adopted owing to economic or practical reasons. Kokoska et al. (2019) and Shedoeva et al. (2019) mention the antimicrobial activity of Aloe vera that has been used for the local treatment of wounds, burns, and infections since ancient times from several in vitro, in vivo, and clinical studies. One major drawback is the concern of safety. A recent study highlighted the toxicity property of some of the diverse plants frequently used in traditional medicine (Mabona and Van Vuuren, 2013). While this needs to be addressed, it is not an exaggeration to say that the health benefits accrued to their use have been enormous.
The plant Mitracarpus villosus is abundantly distributed on farmlands as a weed across the Southern and Northern parts of Nigeria (Onyiloyi et al., 2005), and as also in Senegal, Mali, Liberia, and Gambia (Abere et al., 2007). Previous phytochemical studies and antimicrobial sensitivity tests of the leaf of M. villosus extract reported the potential antibacterial activity of the plants on a few organisms (Irobi and Daramola, 1994; Gbala and Anibijuwon, 2018). Most traditional medicines in West Africa use M. villosus as a remedy for toothaches, headaches (Dalziel, 1992), amenorrhea, leprosy, hepatic diseases, skin diseases (Kerharo and Adam, 1974), venereal disease (Medical Online News, 2019), neurological disorders (John-Africa et al., 2014), dyspepsia, and dysentery (Fabri et al., 2012). Antibacterial effects of the crude ethanolic extract have also been reported for Bacillus subtilis, Streptococcus pyogenes, Escherichia coli, and Staphylococcus aureus (Okoye and Okafor, 2013).
Information regarding the M. villosus (Swartz) DC plant commonly used for local treatment of wound infections is scarce. Traditional plants of known medicinal values are a rich source of active biological compounds with high antibacterial properties (Karygianni et al., 2014).  The presence of compounds of low molecular weight, phytoalexins, in medicinal plants including the M. villosus plant has been shown to possess antibacterial activity (Hemaiswarya et al., 2008). Bioactive compounds including flavonoids, polyphenols, glycosteroids, and terpenoids have been reported in M. villosus (Hemaiswarya et al., 2008). Daiane and Cecilia (2015) and Ekpendu et al. (2001) reported a reasonable amount of triterpenes, terpenoids, and glycosides, in association with M. villosus known to exert various medicinal properties.
Nigeria has an abundant flora, and many species are believed to possess curative activities. Nevertheless, many of these claims have limited scientific validation. The current study may validate the antibacterial activities of M. villosus especially against multidrug-resistant bacteria including Pseudomonas aeruginosa, S. aureus, and E. coli, frequently implicated in delayed healing and infections.
Considering the increasing resistance to currently available antibiotics, the need to develop novel and more potent antibacterial agents to combat the global challenge of antimicrobial resistance is of high priority. Antibiotic resistance remains a serious threat to an effective prevention and treatment of an ever-increasing range of infections caused by bacteria (WHO, 2020). Antibiotic resistance contributes to increase in the cost of health care due to longer duration of illness, additional tests, use of more expensive drugs and more intensive care. Factors such as accumulation of mutations in bacterial genome due to drug selection pressure or natural mutations, misuse and overuse of antimicrobials are associated with increase prevalence of antibiotic resistance (WHO, 2020). The problem of multi-drug resistance is compounded by the widespread indiscriminate use of antibiotics that over time has enhanced bacterial pathogenic potential leading to default in treatment of infections caused by them. This study sought to determine the susceptibility of selected antibiotic resistant Gram-positive and Gram-negative bacteria commonly implicated in diseases in the study area to crude methanolic and aqueous extracts of M. villosus. Extract of M. villosus is frequently used in different communities in Africa for treating various diseases (Neuwinger, 2000) without knowing the active ingredients and pharmacological basis of their action. Identifying the bioactive compounds and its refinement as well as optimization may set the pace for future studies on the toxicity and safety profiles of the use of the plant extract.

Sample collection and preparation
The whole plant of M. villosus (Swartz) DC was collected from the Botanical Garden of Kogi State University, Anyigba, Nigeria (Figure 1). The plant was identified and authenticated in the Department of Plant Science and Biotechnology of the same university. The sample (whole plant of M. villosus) was washed and dried at room temperature in the laboratory for two weeks. Using mortar and pestle, the sample was pulverized to powdery form and placed in a polythene bag until ready for extraction. The maceration method with Soxhlet (solvent) and aqueous (water) were used to extract the bioactive agents. 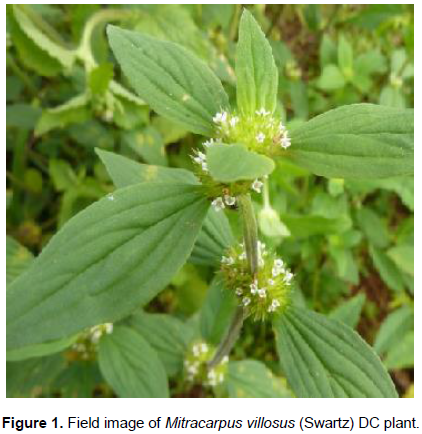 The percentage yield of crude aqueous extract and methanol extract was 9.4 g (corresponding to 8.3%) and 26.4 g (corresponding to 22%), respectively. Table 1 depicts the results of the phytochemical screening. In the methanolic extract, anthraquinones and alkaloids tested negative while glycosides, terpenoids, steroids, saponin, tannin, and flavonoids tested positive. In the aqueous extract, glycosides, anthraquinones, terpenoids, alkaloids, and tannins tested negative while flavonoids, steroids, and saponins tested positive. The results of the antibacterial effects of the crude extract varied at different concentrations against both Gram-positive  and  Gram-negative bacteria are shown in Table 2. Results showed that none of the selected organism could grow in the presence of either the methanolic or water crude extract preparations. The Minimum Inhibitory Concentrations (MICs) and the Minimum Bactericidal Concentrations (MBCs) of the crude extracts against the selected bacteria are depicted in Table 3. The MIC of methanolic extract at 0.001 mg/mL was active against S. pyogenes, S. faecalis, E. coli, P. aeruginosa, and S. Typhi except three isolates. The MBC of the methanolic extract was 0.1 mg/mL for all the isolates except S. aureus and E. coli which was at 0.01 mg/mL. Similarly, the MIC of aqueous extract at 0.01 mg/mL was active against S. pyogenes, S. aureus, B. subtilis, and K. pneumonia while the MBC was at 0.1 mg/mL against all the isolates except S. aureus, B. subtilis, and E. coli.
Our findings showed that both extracts (methanolic and aqueous) have strong inhibitory effects on the growth of the test organisms. The results of the phytochemical study in extracts of M. villosus revealed the presence of bioactive agents such as tannins, flavonoids, saponins, glycosides, terpenoids, and steroids, all of which exhibited antibacterial activity. Our finding supports previous reports by Ubani et al. (2012) and Gbala and Anibijuwon (2018) which indicated that tannins, flavonoids, saponins, glycosides, terpenoids, and steroids are capable of bacterial growth inhibition. However, variations in active substance detection have been documented. Ouadja et al. (2018) identified phenolic and alkaloids in a different species (Mitracarpus scaber) of the same plant which were not identified in the current study, suggesting that variability in bioactive compounds extraction or bio-responsiveness in plant estrogen levels may affect their detection. Ubani et al. (2012), also attributed differences in bioactive substance detection to variation in geographical location as a result of soil mineral concentration.
Results of MIC and MBCs fractions of the methanolic and aqueous extracts shown in Tables 2 and 3 revealed the promising antibacterial activity of the extracts against species of Gram-positive and Gram-negative bacteria such as S. pyogenes, S. aureus, S. faecalis, B. subtilis, E. coli, P. aeruginosa, K. pneumoniae, S. typhi, etc. This finding suggests that, isolation of the active compounds is needed to enable further development of this plant as a source for anti-bacterial substances and the potential pharmacognostic properties of the extract when developed, could surmounts the global treatment challenges associated with antibiotics resistant pathogens frequently encountered in clinical practice.
Findings from the present study showed that the methanolic extract of M. villosus inhibited the selected test organisms better than the aqueous extract, as can be seen from the lower MIC and MBC. This is supported by the higher amounts of bioactive compounds obtained in Table 1 that are known to inhibit and/or kill the bacteria at lower concentrations compared to aqueous (water) extract. Previous reports of Abdelrahim et al. (2017) also showed that the methanol extract of Mitracarpus has a higher inhibitory effect on the growth of B. subtilis, S. aureus, E. coli, and P. aeruginosa compared to the aqueous extract.
The fact that crude extracts of this medicinal herb inhibit some Gram-positive and Gram-negative bacteria indicates the presence of potent antibacterial activities which can be developed (Zahra et al., 2020). Although both the aqueous and methanolic extracts of M. villosus produced inhibitory action against the bacteria, the latter was more active against the bacteria. The need for lower concentrations of the methanol extracts for antibacterial activity compared to the aqueous extracts could be attributed to the efficacy of solvents for extraction of active compounds and also suggests that methanol is a better solvent for isolation of antibacterial principles.
In conclusion, methanolic and aqueous extracts of M. villosus have been shown to possess antibacterial activity on all selected test organisms in this study. The inhibitory effect demonstrated by this extract against test isolates even at their lower concentrations depicts the ethnopharmacological benefit. This observation supports other scientific articles that reported that extract of the plant has potential therapeutic values against S. pyogenes, S. faecalis, E. coli, P. aeruginosa, S. Typhi, S. aureus, B. subtilis, and K. pneumonia resistant isolates commonly associated with various ailments as claimed by traditional medicine healers. Despite the inhibitory effects of extracts of M. villosus on selected clinical isolates that have shown relative resistance to the conventional antibiotics including cotrimoxazole, ampicillin, tetracycline, cefotaxime, amoxicillin clavulanic acid, and ciprofloxacin in the study area (Mofolorunso et al., 2020), further study on individual isolated compounds and their potential for toxicity and safety profiles are needed.

The authors thank the laboratory staff of the Microbiology and Chemistry Departments for providing the enabling environments during the study.