The aim of the study was to establish the seroprevalence of contagious bovine pleuropneumonia (CBPP) and contagious caprine pleuropneumonia (CCPP) among cattle and small ruminants received at abattoirs in Ilorin, Nigeria. A total of 643 blood samples were taken from 324 cattle and 319 sheep and goats. These samples were screened for CBPP and CCPP using rapid latex agglutination tests. The majority were from the north of Nigeria. Sera from cattle were screened for the causative mycoplasma of CBPP, Mycoplasma mycoides subsp. mycoides (Mmm) and small ruminants were screened for the presence of Mycoplasma capricolum subsp. capripneumoniae (Mccp), the cause of CCPP, using specific latex agglutination tests. Clinical signs including specific clinical signs associated with CBPP were also assessed. A prevalence rate of just over 56% was recorded for CBPP. In all, 22 of 324 cattle showed clinical signs but only 10 showed specific clinical signs associated with CBPP infection such as dyspnoea, nasal discharge and cough. A CCPP prevalence rate of about 33% was found among the small ruminants. In total, 52 of 319 small ruminants showed clinical signs of disease but only 22 of these were associated with seropositivity.  The high seroprevalence of CBPP and CCPP in this study is suggestive of extensive CBPP and CCPP infection in Ilorin, Nigeria.

Contagious bovine pleuropneumonia (CBPP) is a highly contagious disease of cattle associated with consolidation and ‘marbling’ of the lung, fibrinous pleurisy and accumulation of pleural  fluid  (OIE,  2013).  Transmission
of the disease is through intimate contact between infected and susceptible cattle due to the inhalation of infected droplets released during coughing, or in nasal discharges from infected animals (OIE, 2013). Nigeria’s status was regarded as CBPP-free in 1965 which had been achieved by a 10-year policy of harmonized disease reporting, vaccination, prompt laboratory diagnosis, quarantine and slaughter (Griffin and Laing, 1966). However, since that time, CBPP cases have re-emerged with the prevalence increasing across different regions of Nigeria (March et al., 2003; Foluso, 2003; Mailafia et al., 2010). In the humid zones, higher herd prevalence has been observed than in arid zones due to differences in the rate of contact between cattle because of their respective production systems (Masiga et al., 1996; Mariner et al., 2005).
Contagious caprine pleuropneumonia (CCPP) is a highly contagious disease of goats and sheep and was originally reported in Algeria in 1873. Its devastating nature and cause of economic losses in the livestock industry makes it a globally notifiable disease (Manso-Silvan et al., 2009). CCPP is pandemic in parts of Asia, Middle East and Africa and it is one of the major threats to the small ruminant industries of developing countries (OIE, 2013). Only 20 countries previously reported the isolation of the causative mycoplasma possibly because of the scarcity of laboratory expertise. However, its isolation has now been confirmed in many regions such as China, Mauritius, Tajikistan, Nigeria, and India using improved detection methods such as the agglutination test, enzyme-linked immunosorbent assay (ELISA) and polymerase chain reaction (PCR) (Nicholas and Churchward, 2012).
There are only a few recent reports describing the prevalence of CCPP in Nigeria compared to CBPP (Egwu et al., 2012; Akwuobu et al., 2014) and none in the southern part of the country. Following the eradication of rinderpest from cattle in 2011, there is now significant global activity in controlling peste des petits ruminants (OIE, 2013).  Since CCPP and this disease can show similar clinical signs it will become increasingly important to differentiate between the two.
Available veterinary records show that CBPP is endemic in Nigeria and that it spreads via movement of trade cattle, seasonal migration and transhuman activities (Aliyu et al., 2000; Foluso, 2003; Ajuwape et al., 2004; Olorunshola et al., 2017). Also outbreaks of CBPP still occur particularly in the northern region which harbours three quarters of the country's 16.3 million cattle (PACE, 2004).  CBPP is caused by the Mycoplasma mycoides subsp. mycoides bacteria which belong to a cluster consisting of five closely related mycoplasmas, namely, Mycoplasma mycoides subsp. capri (Mmc), Mycoplasma capricolum subsp. capripneumoniae (Mccp), Mycoplasma capricolum subsp. capricolum (Mcc) and Mycoplasma leachii (Ml) (Thiaucourt et al., 2011).
Nigeria has a population of between 8 and 13 million sheep with most being found in the northern region and about 3.4 million located in the humid (southern) region. The goat population is about 22-26 million with 6.6 million reported to be in southern region while 20 million are in northern region (Lawal-Adebowale and Alarima, 2011). Breeds of sheep are mainly the indigenous West African Dwarf (WAD) sheep, Due, Balami and Yanks. Among the listed indigenous breeds, Uda, Balami and Yankasa are mostly widespread in the northern region while the WAD breed is common in the southern region. The breeds of goat in Nigeria are also mostly indigenous, and these include the WAD, Sahel/desert known as West African Long-Legged goat, and Sokoto Red/Maradi (Lawal-Adebowale and Alarima, 2011). The Sahel or desert goat and Sokoto Red are the most commont in the north while the WAD is more common in Southern Nigeria (FAO, 2004).
There have been several studies on the epidemiology of CBPP in Nigeria compared with CCPP (Aliyu et al., 2003; Ajuwape et al., 2004; Babalobi, 2011); however, scant information about CCPP is available in the mid-belt region of the country. This study was essentially carried out in Ilorin which is North Central Nigeria. While most of the animals used are from North West Nigeria, effects of relocation especially migration from North West Nigeria to North Central Nigeria make this study very relevant. Furthermore, information on the prevalence of CCPP in Nigeria is still sparse (Ajuwape et al., 2004; Babalobi, 2011). The aim of this study was to provide an up to date epidemiological survey based on abattoir data, regarding the seroprevalence of CBPP and CCPP in the Ilorin region of Nigeria.

Study area
Ilorin is the capital of Kwara State which lies on the plain in the southwest of Nigeria at Latitude 8° 30’ and 8° 50’ N and Longitude 4° 20’ and 4°35’ E. The city occupies an area of about 468 km2 situated within the forest and the guinea savannah regions of Nigeria. The Ilorin climate is tropical, being influenced by the two prevailing trade winds and experiences an annual rainfall of between 1000 and 1500 mm with daily average temperatures of 25, 27 and 22.5°C in January, May and September, respectively. The sampling location for this study was the central abattoir at Ipata, drawing animals from a pool of cattle markets in the local communities of Sango, Oke-ose, Oko-olowo, Alapa, Igbeti, Sadu, Sare, Ajase and Ipata.
Animals, sample collection and study design
A total of 643 blood samples from ruminants, 324 from cattle and 319 from small ruminants (44 sheep and 275 goats) were collected from the Ipata central abattoir. Collected samples of about 3 to 5 ml were kept in labelled sterile bottles and transported to the laboratory in cold boxes containing ice packs and later centrifuged for serum separation before serological testing. The blood sample collections took place from 14 to 24th of December 2016. Relevant information  concerning  the  animals  including  species,  age,  sex, breed, source, weight, physical appearance and health status measured using  classic respiratory signs such as dyspnoea, cough, nasal discharge and emaciation were collected using a structured questionnaire. Cattle carcases were examined for the presence of lung lesions at post mortem.
Serological tests
Rapid latex agglutination tests were used for the detection of both CBPP and CCPP antibodies. These tests had previously proved effective for screening for these diseases in Afghanistan (Bahir et al., 2017). For CBPP detection in cattle serum, the BoviLAT (PA6223) and for CCPP the CapriLAT (RAI6224) tests were used. Both test kits were kindly supplied by the Mycoplasma group at the Laboratory Agency (Weybridge), Addlestone, Surrey, UK. The procedures were carried out according to the manufacturer’s instructions. The test slides were read for the presence of agglutination after between 1 and a maximum of 3 min.  Each animal was observed for clinical signs on presentation at the abattoir which were recorded along with the presenting clinical signs for each animal. The latter included fever (40-42°C), cough and dyspnoea. Positive and negative control sera provided with the kits were tested every 24 samples to monitor test variance and the tests performed in line with previously published data (Nicholas et al., 1996; Ayling et al., 1999a, b; Bahir et al., 2017). Data were analysed by Chi square using SPSS (v.20). 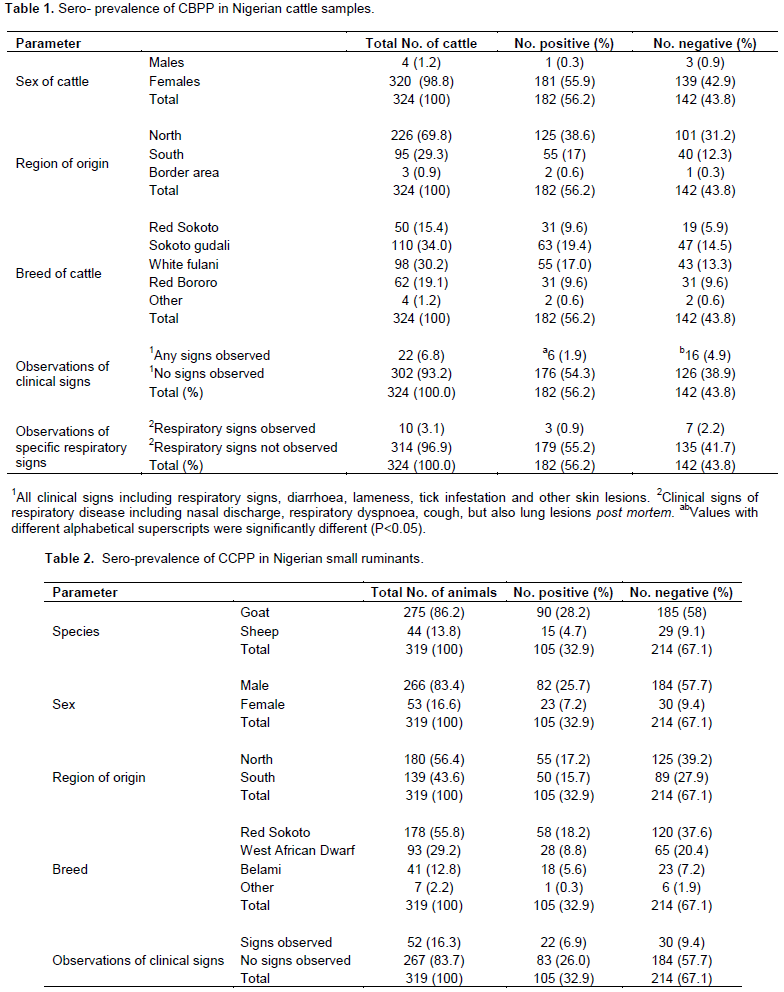