The present study was conducted to determine the seroprevalence of yellow fever virus in patients with clinical signs of febrile jaundice giving suspicion of yellow fever and to evaluate diagnostic techniques for surveillance of yellow fever in the Republic from Chad. From January 2015 to July 2020, an observational study of virological markers was conducted in jaundice patients in Chad. Of the 1730 patients included in this study, a seroprevalence of 0.28% of yellow fever virus was determined. The distribution of pathogens responsible for diseases associated with yellow fever was: 49.47% (Plasmodium falciparum), 2% (hepatitis E virus), 4.62% (hepatitis C virus), and 29.00% (hepatitis virus B), respectively. Discrepancies in the results between the regional reference laboratories and the national laboratory of the Republic of Chad were observed. All genders and age groups were affected. Of the 1730 samples taken, 55.49% were female and 44.51% male (p = 0.01, a significant difference in favor of the female sex). The male/female sex ratio was 1.25. This study, the first, made it possible to determine the rate of the yellow fever virus in the absence of an outbreak in forest areas and with heavy rainfall and to evaluate the MAC-ELISA-CDC techniques used between the national laboratory of the Republic of Chad and those regional references. It was recommended that real-time polymerization chain reaction techniques be made available to national laboratories and reagents from the same manufacturing company in order to carry out effective monitoring of yellow fever.

Yellow fever (YF), sometimes called black vomit, American plague, fever or typhus amaril caused by a Flavivirus, is a serious disease for which there is currently no drug treatment (Hunsperger et al., 2016; WHO, 2016b). It is an arbovirus of equatorial forest monkeys and is transmitted from monkey to monkey by various mosquitoes; the mosquito playing the role of reservoir and vector and the monkey that of biological amplifying host (WHO, 2018). The causative agent of yellow fever is yellow fever virus, and transmission to humans is through a mosquito (Aedes aegypti) which bites mostly at dusk and dawn (Paules and Fauci, 2017; WHO, 2016b). It is a hemorrhagic fever with liver damage accompanied by jaundice, or yellowing of the skin and mucous membranes, kidneys with a tendency to bleeding and the nervous system, fatal in 20 to 60% of the cases. The number of yellow fever cases is estimated each year between 18 and 50/100,000 people living in areas at risk of transmission (WHO, 2016b). The disease exists in many countries in Africa, South America and Europe (Abeera et al., 2019; Amraoui et al., 2016).
An observational study was performed in the absence of an outbreak in patients with signs of febrile jaundice suspected of yellow fever.
The current outbreaks of yellow fever worldwide have demonstrated that rapid laboratory confirmation of suspected yellow fever cases is a key part of an effective response (WHO, 2016a). The best way to detect these outbreaks early enough is surveillance. The surveillance system that is currently in place in almost all African countries focuses on the human component only and is based on clinical examination for jaundice, blood sampling and research immunoglobulins M (IgM) by national laboratories with confirmation by a regional laboratory (Santiago et al., 2018; www.signalement-moustique.fr, 2017). This way of proceeding, although strongly recommended, remains limited because it often only gives alert when disease transmission is already well established in the community. It is probably too late for a disease such as yellow fever, which is characterized by a high proportion of asymptomatic cases (WHO, 2016b; HCSP, 2017).
Routine screening for yellow fever virus on all suspected blood samples has helped delineate areas of transmission and reduced the risk of infection with yellow fever virus. There remains, however, a residual risk of transmission of the yellow fever virus; this risk could be due to two factors: a technical error and a viral variant not recognized by certain reagents.
The aim of this study was to determine the seroprevalence of yellow fever virus in patients with signs of febrile jaundice associated with yellow fever during or in the absence of the epidemic outbreak and to assess the performance of yellow fever virus detection techniques between the national laboratory of the Republic of Chad and the regional reference laboratories of Yaoundé (Cameroon) and Dakar (Senegal).
The results of this work will allow corrective measures to be taken on yellow fever diagnostic techniques  to ensure the quality of results between laboratories and set up an effective surveillance system for the fight against yellow fever in the Republic of Chad and in the sub-region. 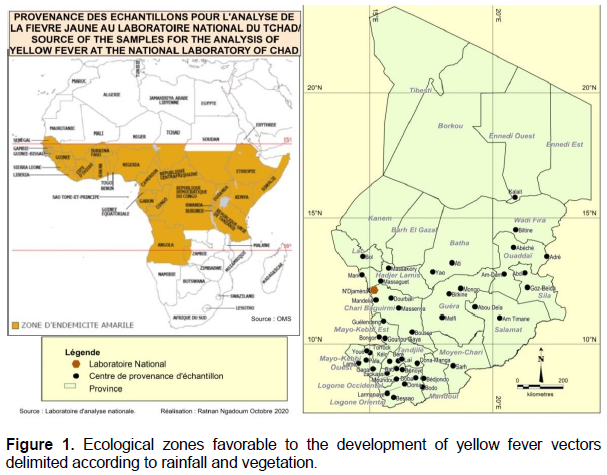 This is the first National Quality Control operation dedicated to the search for RNA of the yellow fever virus. It involved 4 laboratories which all returned a reply slip.
Overall, there is a number of outlier or isolated inter-laboratory values, showing heterogeneity in the results obtained for the same technique.
Detection of the isolated yellow fever virus remains a major challenge for developing countries and in Chad. The evaluation of the circulation of the yellow fever virus requires, on one hand, a better selection and a better loyalty of the places where the vaccination coverage is less or absent in order to carry out a serological survey and on the other hand, by the method which would make it possible to distinguish the antibodies generated against the wild virus (natural immunity) from those aroused by the vaccine virus (acquired immunity). It would be desirable to avoid sampling where the vaccination coverage is high, or to determine by calculation what is the size of the sample which makes it possible to avoid this problem and also to promote vaccination against the virus, in particular from ages 9 and above, and depending on gender.
To the WHO, CDC Atlanta and CDC Africa which are involved in the research of the yellow fever virus, it is recommended that they should make available the standard MAC-ELISA-CDC kits to the national laboratories to carry out adequate serological analyses for the detection of yellow fever virus IgM and/or RT-PCR tests containing the same reagents with the same concentrations and from the same manufacturing company to perform differential tests (such as dengue viruses, West Nile virus and Zika virus) in order to minimize discrepancies results between national and regional reference laboratories for fever.

The authors thank all the people who allowed and facilitated the realization of this investigation in the Health Districts of the different provinces: Yellow fever surveillance focal points for the collection and delivery of samples to the national laboratory; WHO-Chad and MSF-Holland, for sending samples to regional laboratories for quality control and confirmation of results; Mr. RATNAN for drawing up the map of yellow fever for the study areas.