Magnaporthy grisea is one of the most important diseases of the many diseases that attack rice. Failures of entire rice crops have resulted directly from rice blast epidemics.  All    of    the    plant    disease   management strategies and techniques that have been generated have been brought to bear against rice blast, but often with limited success. Rice blast has never been eliminated from a region in which rice is  grown, and a single change in the way rice is grown or the way resistance genes are deployed can result in significant disease increase even after years of successful management. This disease is a model that demonstrates the seriousness, elusiveness, and longevity of some plant diseases. Rice blast has been widely studied throughout the world. Many investigators have considered it to be a model disease for the study of genetics, epidemiology, molecular pathology of host parasite interactions and biology (Xiao et al., 2015), which helped discover new biological control agents, for agriculture crop protection (Tokpah et al., 2016).
Biological control agents (BCAs) antagonistic to plant pathogens are a sustainable strategy for plant protection (Chen et al., 2013). Successful biological control based on plant associated antagonists not only requires a better knowledge of the complex regulation of disease suppression by antagonists in response to biotic and abiotic factors, but also requires a knowledge of the dynamics and composition of plant-associated bacterial communities and what triggers plant colonization (Cretoiu et al., 2013). However, research of screening efficient biological control agents could be used to limit the fungal pathogen (blast). The study intend to discover bacterial strains with potential biological control characteristic from different rice parts, through efficient and useful BCAs experimenting strategy based on activities of extracellular hydrolytic enzymes, antagonism inhibition ability and phylogenetic analysis and BOX fragment sequencing. The practical results of greenhouse and field experiments are conducted for controlling M. grisea and the correlation is analyze between antagonism and biological control efficacies, assessment score, and biological control efficacies. Finally, conidia germination and appressorium penetration on the rice leaf, which led to the control of M. grisea in actual production (Qi et al., 2012).

Examining isolates with potential biocontrol efficacy against M. grisea disease
Rice samples were gathered from farmers filed in Taicang of which bacterial population density was discovered and referenced in (Table 1). Seven hundred and ten bacterial strains were isolated from rice tissue, comprising root, surface and interior of stems, endorhiza, phyllosphere, soil, and rhizosphere. Generally, the amount of bacterial isolates from surface of plant tissues was higher than those from interior (Table 1). Activities of extracellular hydrolytic enzymes (cellulase, chitinase, glucanase, protease and siderophores) were measured, and the bacterial isolates and as well as antagonistic ability were evaluated with reference method (Table 1). 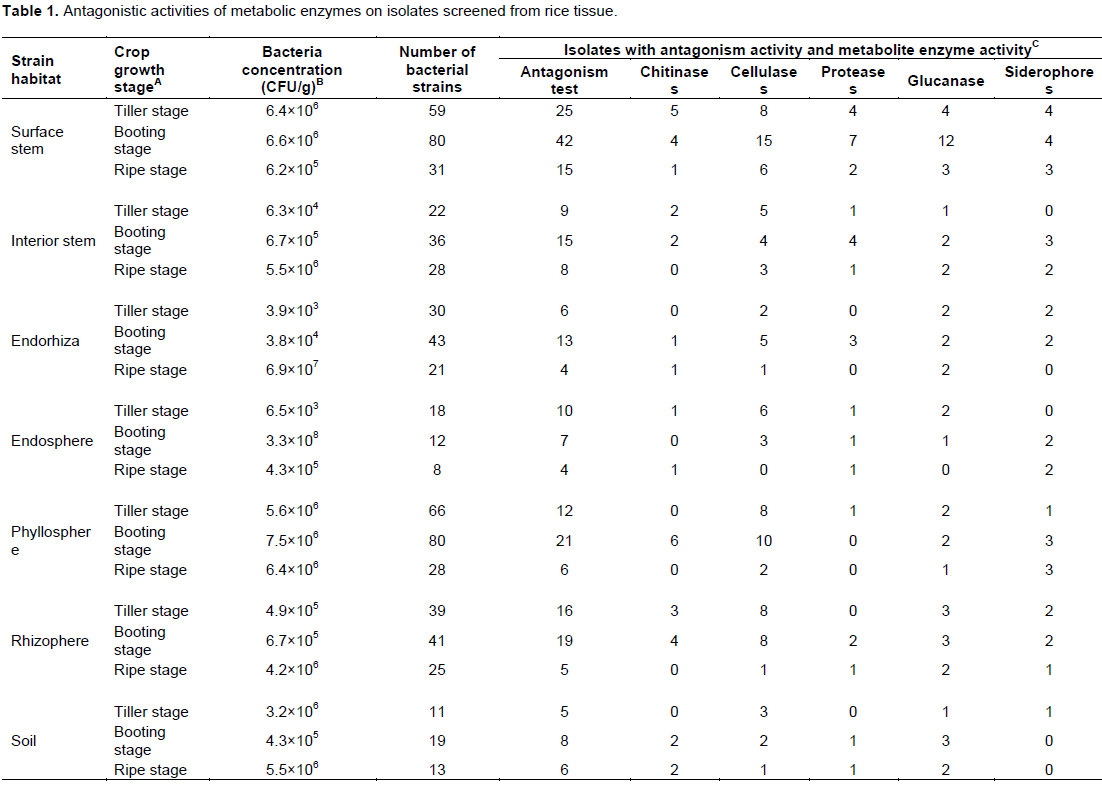 ARDRA and BOX analysis of potential biological control efficacy strains
Eighty-nine isolates with more than 2 in the evaluating score were chosen out of 710 bacterial isolates, and subjected to ARDRA/BOX fingerprint analysis to avoid redundancy in further analysis. The isolates were separated to 10 clusters on 65% similarity (Figure 1A), of the  10 clusters with 1 isolate accounted for cluster 1, 2, 7, 9, 10 and 2  clusters with at least 2 isolates cluster 6, 8, while, others clusters with 4 strains, 29 strains and 47 isolates accounted for 3, 4 and 5 (Figure 1A). Thirty-five bacterial strains with highest evaluating score were taken from each cluster; BOX-PCR experiment was taken to rearrange them into 6 clusters with very important variability (Figure 1B).16S rRNA gene fragments were amplified from genome of these 35  bacterial  strains  and identification of physiological and biochemical shows that HS-8 and DL-7 are Pantoea ananatis and Bacillus cereus strains, and other stains were identified using similar method (Table 2). 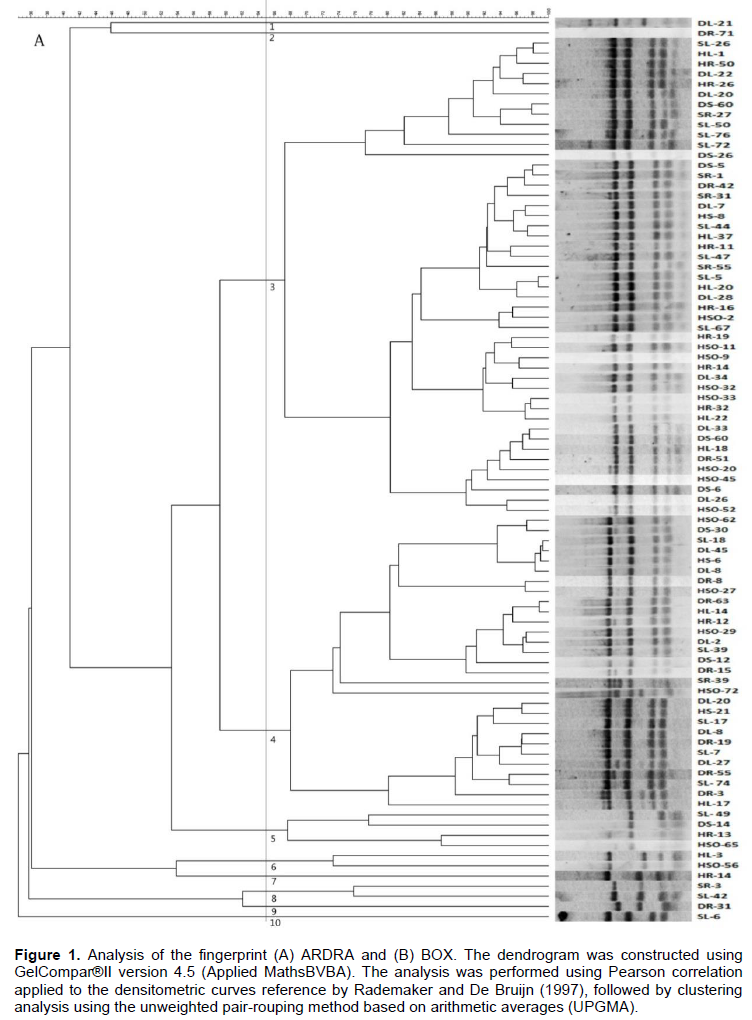 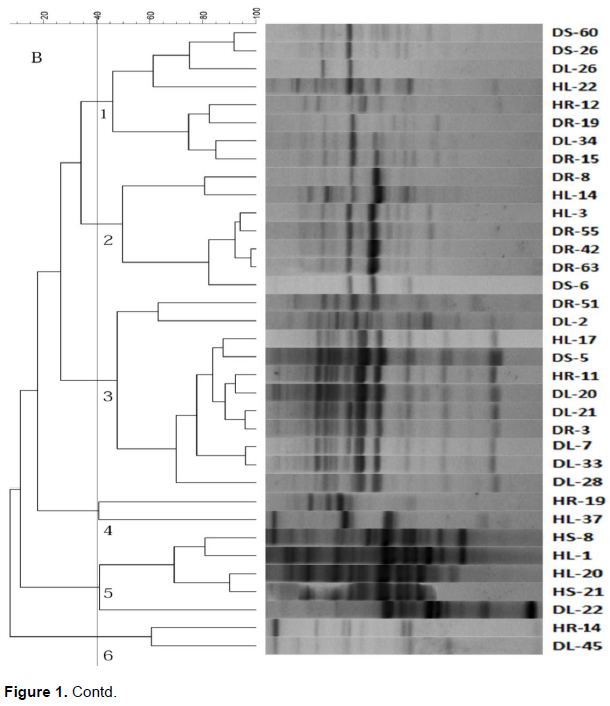 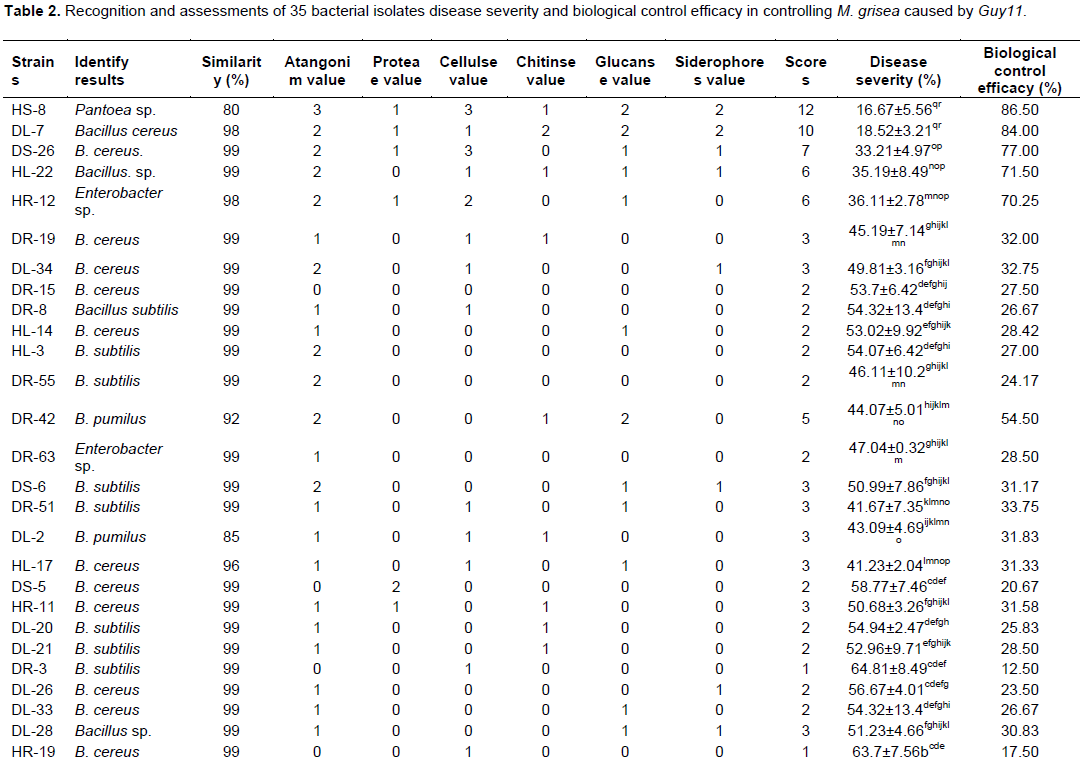 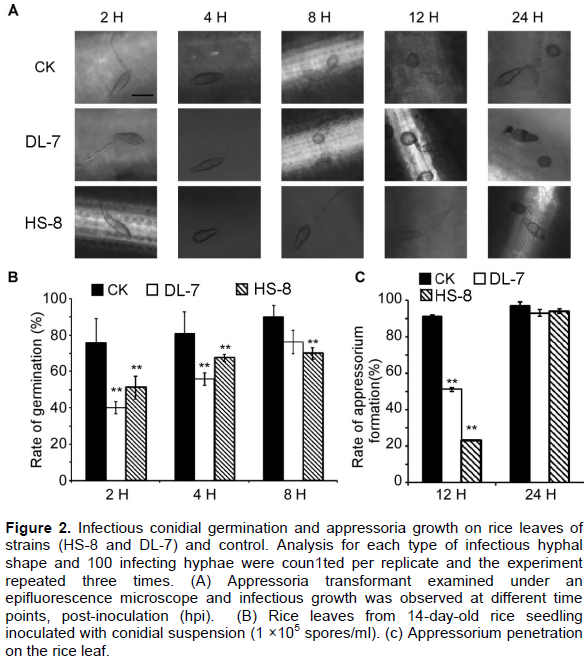 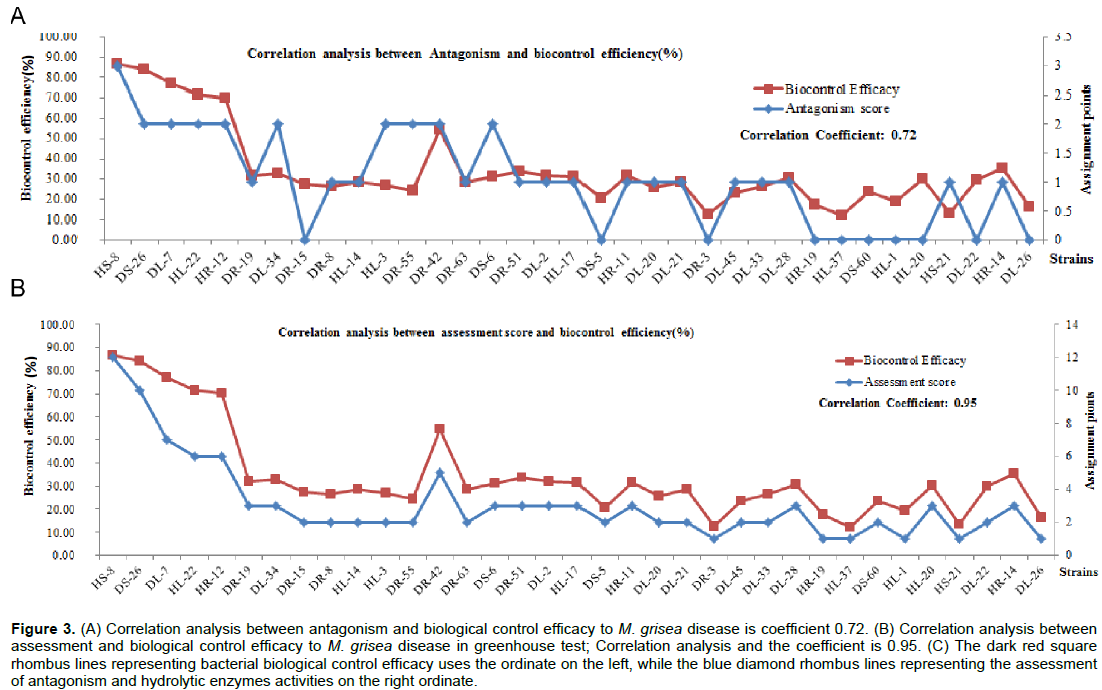 With the alarming news of rice blast disease, and the aggravation of global warming on the rice crop, M. grisea has caused serious loss not only in China but also in other parts of the world (Graham et al., 2013).
Biological  control  agents  were separated in different positions (rhizosphere, surface and interior of stems, endorhiza, phyllosphere, soil, and root) from non-infected/infected rice in this experiment. Bacterial strains with antagonist activities were examined from rice vivo tissue (Table 1); demonstrating vivo plant habitats might  include more bacteria cultural antagonism to plant pathogen as proposed (Villarroya et al., 2016). It might also be related with adaption in the microbial communities in infested fields (Bulgarelli et al., 2013).
To discover acceptable origin of potential  BCAs is to obtain successful biological control and assess the vivo and in vitro of the crop. Previous, research has mainly focused on isolating nitrogen-fixing bacteria (Balsanelli et al., 2016) and plant growth-promoting bacteria (Corcione et al., 2013).
On the contrary, the study focus is on  biological control isolates to restrict M. grisea infection on rice (Figure 4A and B) which, suggest that antagonistic activity against M. grisea and activities of hydrolytic enzymes, were in essential to the biological control agents. Thus, recommending the study assessment strategy for testing biological control agents in similar works. 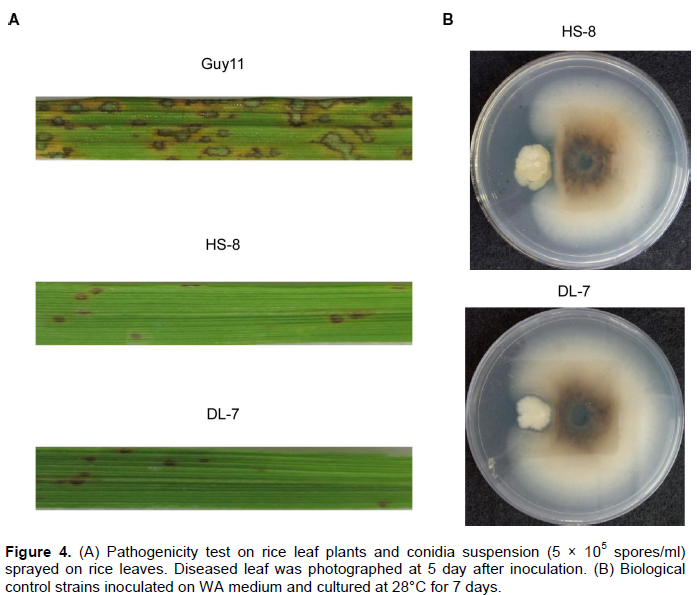 ARDRA and classifies assessment strategy and BCAs helped avoid using biological control agents of same species in greenhouse and field test and receive different genetic background, which reduce workload in follow-up test. In other experiments, classifying assessment strategy based on genetic background was not included (Er et al., 2016), which resulted in duplication of same species, which is time-consuming.
Biological control success may depend on suitable formulations as well as survival of the microbial agents. Bacteria as biological control agents have advantages over fungal when applied as a preventive application to suppress the disease. In line with this study, several strains of bacteria isolated from rice plant were previously evaluated for their antagonistic ability against M. grisea (Tokpah et al., 2016). Six BCAs were acquired with more than 50% which displayed preferable biological control ability (Table 2).
Moreover, those six BCAs with more than 50% showed significant correlation in greenhouse with strains’ assessment score but some disparity of acting in field experiment against M. grisea (DR-42 and HR-12), showing  that  similar  BCAisolatesmightgivedifferent biological control characteristic against M. grisea in the sameenvironment. Biological  control efficacy was higher in greenhouse and lower in field test (Tables 2 and 3), perhaps resulting to different environmentalsites,andtemperature(Zaidaetal.,2014),withfurtherconsequences in different of colonizing abilities. On the other hand, few other characters of bacterial isolates, such as motility and nutrient competing ability, are possibly altered by colonizing condition as well (LeRoux et al., 2015). For separating successful biological control bacteria in different environment, climates and soil types were also considered. Like most other pathogens, conidia of M. grisea play a central role in the disease cycle. The infection process is initiated with attachment and conidia germination on the plant surface and appressoria formation from the end of the germ tubes (Figure 2A and B) (Turrà et al., 2015). In this study, more experiment that will focus on the mechanisms of the biological control agents was discovered.
With reference to the authors knowledge, this research is the newest to discover collections of an effective bacteria’s, namely P. ananatis spp. strain (HS-8) and B. cereus spp. strain (DL-7) as BCAs against M. grisea based on the study assessment strategy (Tokpah et al., 2016), which showed good feasibility resulting in high correlation coefficient (Figure 3A and B). P. ananatis  HS-8  and  B.  cereus  DL-7  show obvious biological control capacity against M. grisea in greenhouse and field experiments while, other isolates with good biological control efficacy in greenhouse (DR-42 and HR-12) did not do well in field experiment (Tables 2 and 3). It can be hypothesize that strains HS-8 and DL-7 may ascribe to better adaptability in various environment as in different colonizing sites even one rice plant might face complete disparate environmental condition. Focusing will be on the mechanism of strains HS-8 and DL-7 referencing BCAs against rice diseases.

Authors declare no conflict of interests.