Most protocols regarding sample decontamination for Mycobacterium avium subspecies paratuberculosis (MAP) isolation are based on the MAP detection from feces and not milk. The choice of the best decontamination protocol is crucial to a successful MAP isolation. In this study, 36 combinations of variables for sample decontamination and MAP isolation from raw milk presented in the literature were carried out on milk samples artificially contaminated which were then inoculated into tubes with three different culture media: Herrold egg yolk medium (HEYM) prepared with fresh egg yolk, HEYM prepared with commercial egg yolk and Lowenstein-Jensen medium (LJ). Each treatment was performed in triplicate for each medium, with a total of 324 observations. The protocol combination which provided higher MAP growth and lower nonspecific contamination in a shorter period of time was considered improved. In this study, the protocol involving 0.75% HPC at room temperature for 24 h, using centrifuge at 2500 × g for 15 min and addition of antimicrobial solution immediately before inoculation into tubes with HEYM prepared with fresh egg yolk provided the greatest MAP isolation from raw milk samples.

Mycobacterium avium subsp. paratuberculosis (MAP) is the causative agent of paratuberculosis, a chronic granulomatous enteritis that affects all ruminants and has been proposed as one of the etiologic agents of Crohn's disease, a chronic granulomatous enteritis seen in humans. The transmission vehicle could be milk and dairy products (Abubakar et al., 2008; Atreya et al., 2014; Liverani et al., 2014). Despite the ban on the marketing of raw milk in Brazil since the 1950s (BRASIL, 1950), it is estimated that about 20 to 30% of bovine milk production in Brazil is marketed without sanitary inspection: the sale of these products is held freely in several cities (Abrahão et al., 2005, Motta et al., 2015), and this is a significant public health problem.
Animals with paratuberculosis excrete MAP in feces and, in smaller quantities, in milk (Sweeney et al., 1992). Most protocols regarding sample decontamination for MAP isolation are based on MAP detection in feces and not in milk (Stabel, 1997, Whitlock et al., 2000, Bradner et al., 2013). Due to the characteristics of each type of sample, different protocols must be followed. Therefore, it is necessary to develop methods accordingly.
MAP isolation also depends on chemical decontamination to inactivate other microorganisms in the sample that could inhibit the growth of MAP, since this presents a very slow rate of growth (Collins, 2003, Bradner et al., 2013). Chemical decontamination, however, is known to affect also the viability of MAP and therefore increases the likelihood of a false-negative culture result (Grant and Rowe, 2004). In addition, the existing culture protocols take from 12 to 18 weeks to isolate a suspect colony (Grant et al., 2001). Thus, a balance between an efficient inactivation of undesirable microorganisms and low environment toxicity for MAP is needed. The choice of the best decontamination protocol is crucial to a successful isolation of this potential zoonotic organism.
This study compared protocol combinations for sample decontamination and MAP isolation from raw milk, aiming at a protocol with earlier isolation, less contamination and facility of application. 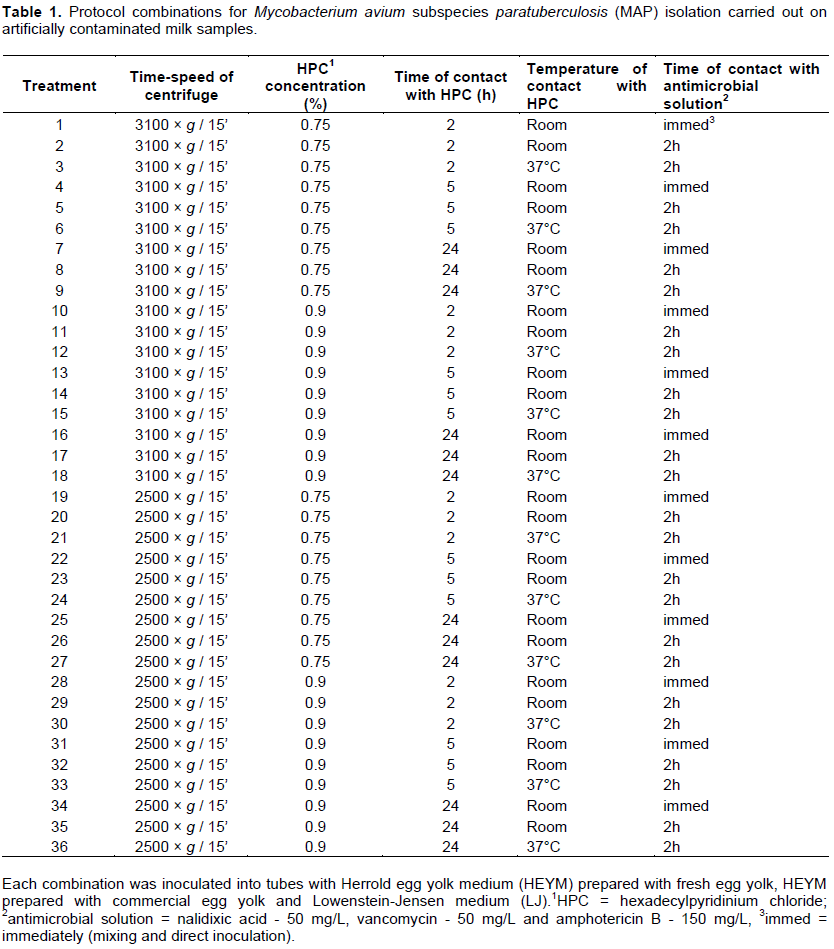 HEYM was prepared according Manual of Diagnostic Tests and Vaccines for Terrestrial Animals, from World Organisation for Animal Health (OIE, 2014). Briefly, for 1 L of medium we used 9 g of peptone, 4.5 g of sodium chloride, 2.7 g of beef extract, 27 mL of glycerol, 4.1 g of sodium pyruvate, 15.3 g of agar; 2 mg of mycobactin, 870 mL of distilled water; 120 mL of egg yolks and 5.1 mL of a 2% aqueous solution of malachite green.
Statistical analysis
Each treatment was performed in triplicate for each medium, with a total of 324 observations. Data were analyzed by ANOVA and discriminated means were compared by F test and Scott-Knott test at 5% probability. Observation of bacterial growth was made considering score 5 for optimum growth, score 3 for good growth, score 1 for no growth and score 0 for contamination. 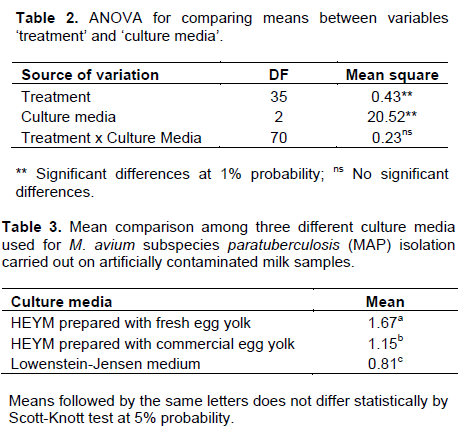 There are no studies showing differences between the use of a fresh egg yolk emulsion or commercial egg yolks in the composition of HEYM. However, these differences can be explained by the possible use of some kind of preservative in the manufacture of commercial emulsions of egg yolks which may influence MAP growth. Unlike some studies (Juste et al., 1991, Florou et al., 2009) where there have been no reported differences between HEYM and LJ, in this study, 88% of tubes containing LJ were discarded due to contamination. However, production of LJ is more difficult compared to HEYM and one objective of this study was the ease of handling.
Comparing the 36 treatments used for M. avium subspecies paratuberculosis (MAP) isolation, the protocols followed by letter ‘a’ were significantly better than those followed by letter ‘b’ (Table 4). 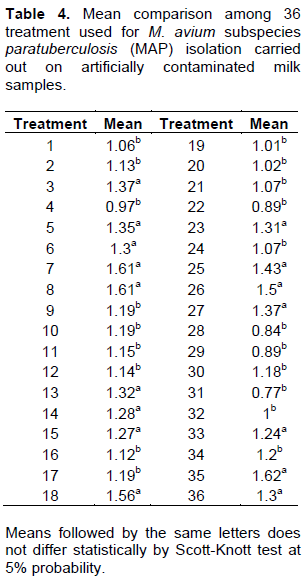 Similar to some studies (Dundee et al., 2001, Gao et al., 2005) which have shown that treatment of milk with 0.75% HPC is better for the detection of MAP, in this study 0.75% HPC was used in the improved protocol. Some studies have used other products for chemical decontamination, such as BHI with HPC and CB-18TM (Dundee et al., 2001; Ozbek et al., 2003; Ruzante et al., 2006). However, this study aimed at a high isolation rate of MAP and ease of application, and considering that these other reagents are more costly compared to HPC and that more work is necessary for the implementation of these protocols, this study used only HPC. The other agents would be greatly disadvantageous if a large number of samples needed to be tested. Meanwhile, studies carried out by Dundee et al. (2001) indicated that treatment with HPC for 5 h was more effective, while in this  study   HPC  for  24  h  was  used  in  the  improved protocol.
Although in this study just K10 strain was used for comparing protocol combinations for sample decontamination, it is important to highlight that the types of culture media could determine differences in the growth of MAP strains (Cernicchiaro et al., 2008).
Considering that animals with paratuberculosis excrete MAP in small quantities in milk (Sweeney et al., 1992) and that a significant proportion of MAP cells was observed to be present in the initial sample of milk were not recovered after decontamination, regardless of the method used, there is a consensus that decontamination methods may also affect MAP cells, resulting in false negatives (Reddacliff et al., 2003). These researchers have found that, during decontamination, the number of microorganisms is greatly reduced as well as in subsequent removal of aliquots for inoculation into media. This increases the necessity of using other diagnostic methods, for example molecular tools, as complementary instruments in MAP detection, although isolation is considered the gold standard.
In this study, it was considered that a protocol involving 0.75% HPC at room temperature for 24 h, using a centrifuge at 2500 × g for 15 min and an antimicrobial solution immediately before inoculation into tubes with HEYM prepared with fresh egg yolk provided the optimal MAP isolation from raw milk samples. This protocol was also less laborious, shows an ideal quality for the simultaneous processing of large quantities of raw milk samples, although the protocol was somewhat time consumed requiring 24 h.