Cryptosporidiosis is an infection caused by Cryptosporidium species which are intestinal pathogens (Saha et al., 2019a). It serves as a common cause of diarrhoea in humans and animals (Elsawey et al., 2020). Cryptosporodium associated diarrhoea has become well known as a result of its severe manifestation in acquired immunodeficiency disease  syndrome (AIDS) patients (Agholi et al., 2013). It is an important opportunistic infection and is responsible for significant morbidity and mortality in Human Immunodeficiency Virus (HIV) and AIDS patients (Sarkar et al., 2014).

The clinical spectrum seen in HIV infected individuals ranges from asymptomatic infections to severe diseases that are characterized by profuse watery diarrhoea, which may be accompanied by vomiting and abdominal pain.(Nkenfou et., 2013; Petrova et al., 2017).

Effective methods to diagnose cryptosporidiosis especially among immunocompromised have been of great challenge in most laboratories in developing countries like Nigeria. Without a proper diagnostic tool, the burden of the infection and its effect on growth, malnutrition and mortality remains underappreciated. Over the years microscopy using modified Ziehl Neelsen (MZN), has been the main diagnostic method in detecting the oocyst in diarrhoeal stool (Ojuromi et al., 2012). Because of their tiny size (about 4-6 µm), detecting the parasite in diarrhoeal stool using MZN has been a problem (Ojuromi et al., 2012; Kumarya and Gwarzo, 2013). This is because the oocysts are usually confused with other faecal materials, pollen and yeast cells. Another disadvantage of this technique is that large number of oocysts (50,000-500,000) per gram of stool need to be present for detection (Ahmed and Karanis, 2018). Where low oocyst numbers are expected in samples, concentration methods are used to increase the sensitivity of detection (Radfar et al., 2013). Due to its limitations, other more effective methods such as antigen detection using enzyme linked immunosorbent assay (ELISA) which can detects low level of oocysts in a gram of stool, have been developed to give more reliable results (Ghoshal et al., 2018). This method of diagnosing cryptosporidiosis is becoming increasingly used because of their increase in sensitivity and specificity (Gawad et al., 2018).

Studies on cryptosporidiosis remain scanty in Northern Nigeria, especially amongst immunocompromised patients. The greatest burden of cryptosporidiosis is in children and HIV patients (Costa et al., 2018; Karshima and Karshima, 2021). It has been estimated in India among children <2 years, that cryptosporidiosis leads to 3.9-7.1 million diarrheal episodes, 66.4-249.0 thousand hospitalizations, and 5.8-14.6 thousand deaths each year (Sarkar et al., 2014). In HIV seropositive patients, it is a major cause of chronic diarrhoea which subsequently leads to malnutrition and death in severe cases (Iqbal et al., 2012). Therefore, prompt and reliable methods of diagnosis are essential to help curb the severity in such groups of patients.

The main aim of this study is to compare microscopy using Modified Ziehl-Neelsen (MZN) with ELISA in the detection of Cryptosporidium in stool.

The study was a cross sectional and prospective type. A total of 183 HIV seropositive patients attending the HIV treatment clinic were recruited to participate in the study.

Collection and processing of samples

Stool samples were collected in a clean wide mouthed screw capped plastic containers, which were transported to the Medical Microbiology laboratory of ABUTH, Zaria for processing. The samples were preserved and concentrated using the formalin-ether concentration method (Allam et al., 2021). In this method, 2 ml of watery stool was collected in a tube and then 10 ml of 10% formalin added. This was mixed well then filtered using a coffee strainer into another tube and faecal particles collected on the sieve were discarded. Three millilitres of ether were added to the filtrate and solution was vortexed for 15 s. This was to allow adequate mixing of ether to the filtrate and centrifuged immediately at low speed (500 g) for 1 min. After centrifuging, four layers were formed; topmost layer represented the ether, then faecal debris layer followed by formol water layer and lastly the sediment layer. The layer of the formol water was carefully transferred to another clean tube using a Pasteur pipette. One millilitre of this was transferred into a clean plain bottle for ELISA analysis, and the remaining was then centrifuged at 1000 g for 10 min.  The supernatant was discarded while the sediment was used for making the smear (Tahvildar-biderouni and Salehi, 2014).

The smears were allowed to air dry and then fixed using 95% ethanol. After fixing, the slides were stained with concentrated carbol fuchsin, after which it was heated from below until vapour was seen. This stain was left for 5 min before it was rinsed with water. This was followed by decolourization using 1% sulfuric acid for 1 min and then washed. Lastly 1% methylene blue was used to counterstain for 1 min, and finally washed. The smeared slide was then air dried and viewed under X 100 objectives. Under oil immersion, Cryptosporidium oocyst appeared as oval pinkish red on a blue background.

The supernatant from the previously preserved stool sample was used for this procedure using ProspecTTM (Oxoid, Basingstoke, UK). This is a rapid ELISA kit for detection of Cryptosporidium antigen in the stool. Test was carried out according to the manufacturer’s instructions.18

Washing of wells consisted of filling each well to overflowing and decanting contents. After the last fill, contents were discarded into a container, and the plate turned upside down on a paper towel. Results were read both visually and using an ELISA reader. Visually, positive result was seen as pale to deep yellow while negative  wells  will  remain  colourless. Wells were read at 450 nm. Absorbance of 0.15 OD and above was read as positive while absorbance reading at less than 0.15 OD was recorded as negative.

A total of 183 diarrheal stool samples were collected from March to December 2017 from HIV seropositive patients attending the HIV treatment clinic. Ninety-two (50.3%) participants were in the age group 26-35 years while the 36-45 years group had 46 (25.2%). Only 7 (3.8%) of the participants were from the age group 56-65 years. Out of the 183 participants, 132 (72.1%) were females and 51 (27.9%) were males (Table 1). +Modified Ziehl-Neelsen stain identified 7 (3.8%) Cryptosporidia in stool of the HIV seropositive while ELISA identified 9 (4.9%) of these cases (Figure 1). However, using a Kappa test there is strong agreement between the two methods in the detection of Cryptosporidium in the stool. 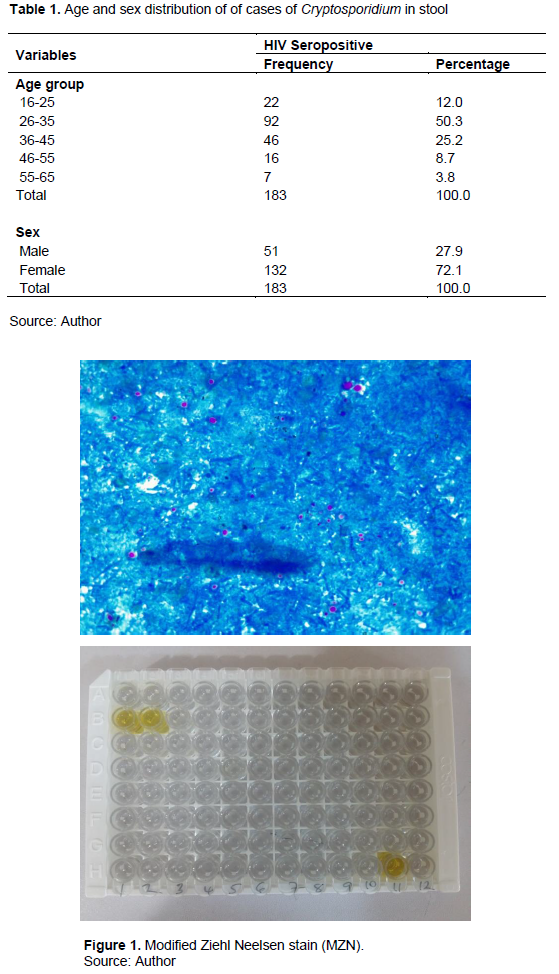 The sensitivity and specificity results showed that ELISA has a significantly higher sensitivity than MZN in the detection of Cryptosporidium in stool; although the specificity of MZN is, still high (Table 3). These findings are buttressed by several studies in various parts of the world that revealed the higher sensitivity and specificity of ELISA as compared to MZN (Cengiz et al., 2016; Aly Shalash et al., 2016; Omoruyi et al., 2014). However, one study by Mittal et al. (2014) revealed that MZN staining is a more sensitive method than ELISA for detection of Cryptosporidium in stool samples but that the specificity of ELISA was more than MZN (Mittal et al., 2014; Saha et al., 2019b). Another study in India showed that MZN and ELISA have comparative sensitivity and specificity. They also concluded that ELISA may be used as a reliable substitute for microscopy in setups where  the  case  load is higher or expertise in special staining techniques is unavailable and that the cost of the ELISA kits can only be justified if the sample load is sufficiently high or if immunocompromised patients form a significant patient population (Ghoshal et al., 2018; O’Leary et al., 2021).

Furthermore, MZN may detect some false positives as indicated by the positive predictive value of 85.7% and above. One of the major advantages of ELISA is in its detection of Cryptosporidium antigens during asexual multiplication which cannot be picked on MZN (Ghoshal et al., 2018). In this  study,  2  cases  of  Cryptosporidium were detected in stools which were reported as negative by MZN, further buttressing the relative superiority of ELISA  over   MZN.  Despite being a bit costly, ELISA should be considered for diagnosis in situation where there is a low concentration of parasite in the faecal samples and to overcome the lack of experienced technicians who can carry out MZN (Hassan et al., 2021). 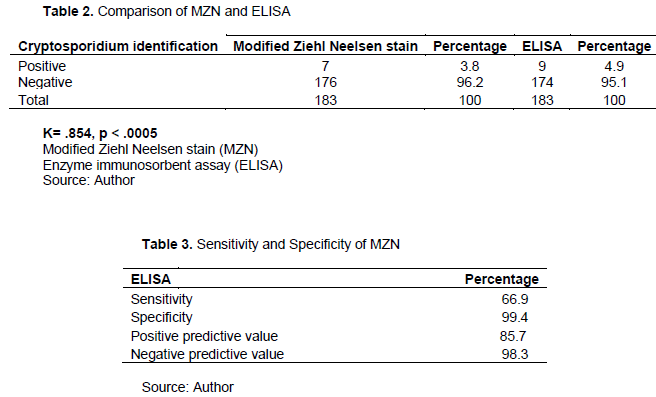