One of the important causes of uterine and cervical malignancy and premalignancy lesions in human is the infection with papilloma virus, especially genotypes that belong to high-risk human papilloma virus (HR-HPV) group. The involvement of HPV DNA testing in an adjacent to cytological screening will be of positive impact in early discovery of cervical neoplasia among women at risk and will significantly minimize the mortality rate. The study subjects were screened for cervical neoplasia which may be caused by different genotypes of HR-HPV among Saudi females. Two hundred and thirty eight (n=238) cervical scrapings were collected from women who attended Maternity and Children Hospital (MCH) at Al-Madinah Al Munawarah between August 2015 to January 2017, and thereafter processed and examined cytologicaly using liquid based cytology (LBC). Simultaneously, one-step Polymerase chain reaction (PCR) was performed to examine the presence of HR-HPV different genotypes. Low incidence of precancerous epithelial lesions was observed among enrolled patients 13 (5.5%) with the following distribution: high-grade squamous intraepithelial lesion in 5 cases (38.5%), low-grade squamous intraepithelial lesion in 4 (30.8%) and four cases (30.8%) as a typical squamous cells of undetermined significance. Nevertheless, HR-HPV was detected only in 6 (2.5%) cases and overall prevalence of HR-HPV in abnormal Pap smears was 15.4% (2/13). On the other hand, HPV were also seen in 1.9% (4/238) among smears that were registered free from any type of malignancy (NILM). The study concluded very low prevalence of HR-HPV in routine cervical screening samples among suspected Saudi women. Additionally, weak correlation between HPV and the incidence of cervical neoplasia was also observed. This may direct the clinicians and researchers to look for other suspected HPV genotypes in this regards.
Key words: Cervical cancer, high-risk human papilloma virus (HR-HPV), low-risk human papilloma virus (HR-HPV), Saudi women, Al-Madinah Al Munawarah, Saudi Arabia.

Cervical cancer remains a major public health concern, affecting communities with low socio economic status (Sankaranarayan et al., 2009). It is a type of fatal neoplasia with mortality that exceeds 275,000 annually;  the majority of which are in the third world countries (WHO/ICO, 2011). One of the major causes of his type is the high risk human papiloma virus, especially types 16 and 18 (Lowy and Schiller, 2012). Whilst Saudi Arabia possess a population of more than nine millions females within the reproductive age (>15 years old), the risk of having cervical cancer will be more likely. Recent studies announced that the mortality rate was 84 women among 241 confirmed cases of -cervical malignancy. This type of cancer is accounted to be the 8th most frequent cancer among Saudi females within ages of 15 to 44 years old. Concerning burden of HPV in KSA, there is no available data. However, in other parts of Western Asia, different studies estimated 2.3% prevalence of HPV among suspected females, with most of the infections attributed to 16 or 18 genotypes (Information Centre on HPV and Cancer - ICO, 2010).
Scientific studies over the past few decades revealed definitive evidence that cervical cancer is a sexually transmitted disease caused by a certain type of high-risk, oncogenic HPV infection (Parkin, 2002; McLaughlin-Drubin and Munger, 2008). The prevalence of HPV in cervical neoplasia was suggested to be within the range of 85 to 99% globally (Walboomers et al., 1999; de Sanjose, 2010). In recent studies, several factors were proved to be correlated with HPV persistence; the most important are HIV/AIDS, cervicovaginal dysbiosis, contraceptives and smoking (Mitra et al., 2016). For instance, there are two genotypes of genital HPV, low oncogenic risk including genotytypes 6 and 11, while genotypes 16 and 18 are of high oncogenic risk belonging to the second genotype. Thus, developing to precancerous lesions by these viruses depend mainly on the infecting genotype. At the present time, genotypes 18 and 16 are carrying the responsibility for about 70% of all global infections (Koshiol et al., 2000; Stanley, 2009).
Nevertheless, progression to cervical neoplasia caused by LR genotypes only (without the involvement of HR genotypes) was not detected among different forms of the diseases (Ostor, 1993). Moreover, the prevalence of HPV associated cervical cancer could be better assessed by self sampling. Screening of human papilloma virus has shown a recent increase when self-sampling- which means the participants do not need to attend the clinics for sampling- was applied, (Enerly et al, 2016; Sultana et al, 2016). It showed higher detection rates for â©¾CIN2 than routine cytology-based screening, and similar detection rates as HPV and cytology co-testing, revealing its importance (Lam et al., 2018). For Saudi Arabia, we received limited published data on the prevalence of HPV infection (Al-Badawi et al., 2011; Alsbeih et al., 2011). The involvement of cytological screening with the aid of molecular techniques will greatly help in the detection of suspected cases. Therefore, rapid detection and identification will greatly reduce the mortality and morbidity among risky groups. Moreover, identification of HPV genotypes in KSA may help in the development of vaccination for HPV types.

Study type, duration and clinical specimens
Two hundred and thirty-eight women (n=238) attended Maternity and Children Hospital (MCH) in Al-Madinah Al Munawarah with different ages (15-80 years) and gynecological symptoms (menorrhagia, urine incontinence, vaginitis and other vaginal diseaases) during the period from August 2015 to January 2017 were included in this study after being given their informed consent. They were investigated for cytological appearance and the presence of HPV as well. Vaginocervical fluid was collected by using modified cyto-brush and rinsed into a labeled vial containing 15 ml of PreservCyt® transport medium, then transported to the laboratory for investigation. The samples were then processed using (Beckton, Dickson; PrepStain Slide Processor/TriPath Imaging Inc, 2005). The remaining specimens were investigated for high risk HPV DNA.
DNA extraction, PCR amplification and gel electrophoresis
DNA was extracted by DNA extraction kit according to the manufactures’ instructions (Sacace Biotechnologies- Italy). Purity of the harvested DNA was adopted by NanoDrop (Thermo SCIENTIFIC, US). In the amplification protocol, three sets of PCR premix-1 were used to check for the presence or absence of 12 possible genotypes (PCR mix-1 “16-35”, PCR mix-1 “18-59”, and PCR mix-1 “52-66”). Polymerase chain reaction (PCR) was adopted in 25 μl according to (Sacace Biotechnologies), in a PCR tube containing 5 µL of PCR-mix-1, 10 µL of 2.5 PCR buffer, 0.5 TaqF polymerase and 10 µL of template DNA were mixed. Also, control tubes were prepared to be included in the reaction. Amplification of the target sequences was conducted using PCR machine (SYNGENE, UK). PCR protocol was carried out according to Sambrook et al. (2001). Finally, the target ampilicons were monitored under UV light on 3% agarose gel, with reference to Table 1 to compare the products sizes. 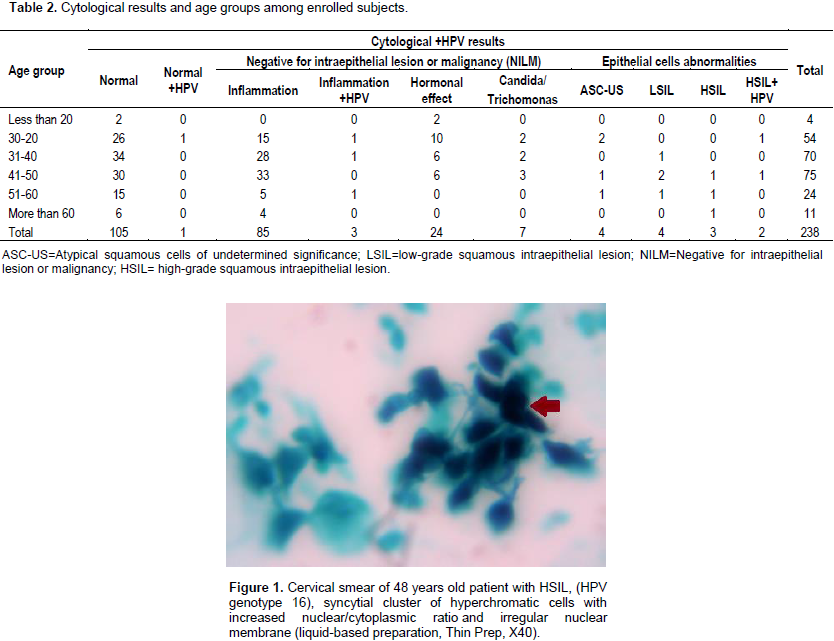 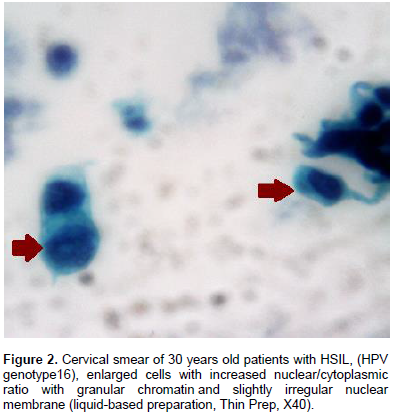 Detection of HPV
HPV was detected in only six cases (2.5%), with two of them present in patients with epithelial change (2/13 hand, the remaining four genotypes were detected within cells that appeared free from any types of neoplasia as follows; HPV genotype 52 was identified in two patients with inflammatory condition and genotype 33 was present in one case with inflammation. However, HPV-58 was confirmed in women with normal smears (Figures 3 and 4 and Tables 2 and 3). 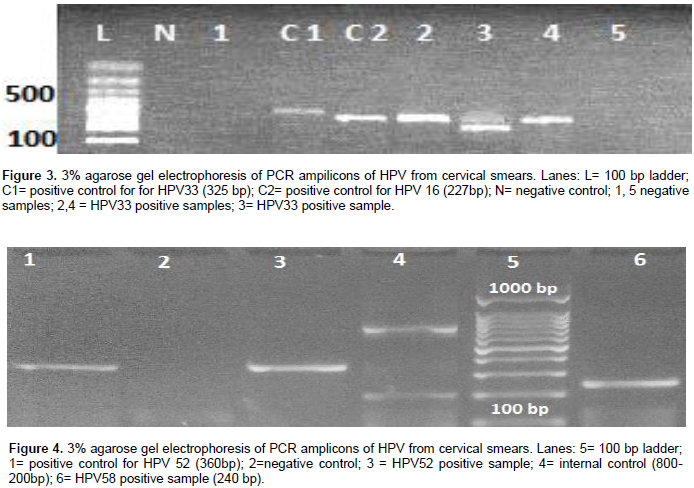 In this study, the incidence of abnormal epithelial cells is low, constituting 6.3% (12/190) of screened cases. This result is not far from that of Altaf (2008), who studied cervical neoplasia among Saudi women in the period from 1990 to 2004. Here, the author found that the incidence of abnormal pap smears was 4.7% of study group (5132 patients) and also reported the classification of abnormal pap smears in the study as follows; atypical squamous cell (2.4%), atypical glandular cells (1.1%), low scale squamous intraepithelial (0.6%) and high scale squamous intraepithelial (0.4%). Different malignant groups were observed which include: adenocarcinoma of the cervix, neuroendocrine carcinoma and squamous cell carcinoma. This study showed that the most of precancerous lesions were distributed in the age group (41-50) followed by (51-60) years. This result totally disagree with Sawaya et al. (2000) who studied the percentage of cervical changes in a three years longitudinal study, their results indicated that the target cervical abnormalities were found to be predominant among women under 30 years old followed by age group of 30-49 and 50-64 years old respectively, while women over 65 years old showed the lowest frequency.
Nevertheless, Saudi Cancer Report (SCR, 2011) showed evidences that cervical neoplasia among Saudi females were mostly found among age group of 15-44 years old. Our findings also suggested that HPV-16 was detected among women of the age group 21-30 and 41-50 while HPV-33 was isolated at age group 51-60 years old. These results are not far from that of Bruni et al. (2010), who recorded cervical cancer among Saudi females to be most likely concentrated among the age group (41–45 years) followed by the age group (56–60 years) as has been observed in other communities. One of the major concerns of this project is the estimation of the prevalence of HPV among suspected women. Different studies estimated that the prevalence of HPV among suspected females may exceed 99% worldwide (Walboomers et al., 1999; de Sanjose et al., 2010), whereas in KSA and other similar regions the ratio between HPV and cervical cancer is scanty (Hussain et al., 2012; Khorasanizadeh et al., 2012; Hammouda et al., 2011; Alsbeih et al., 2011; Al-Badawi et al., 2011).
On the other hand, many researchers noted that the situation of cervical neoplasia among Saudi women is comparable and the participation of HPV in this phenomenon is also within the normal range worldwide (Ghazi, 2014). The majority of these studies suggested that the most frequent genotypes were HPV 16 and 18 respectively (Alsbeih et al., 2011; Al-Badawi et al., 2011). Furthermore, multiple infections caused by more than one genotype were recorded among Saudi females (Ghazi et al., 2013; de Sanjose et al., 2010; Walboomers et al., 1999). One important finding is the presence of epithelial cell changes among 11 (84.6%) cases with the absence of any HPV genotypes, a result that was previously suggested by many researchers worldwide. Farnsworth (2011) observed significant prevalence (8%) of squamous carcinoma among Australian females identified negative for HPV. Similarly, Poljak et al. (2009) with the agreement of Tjalma et al. (2013) proved the occurrence of 12.6% of cervical cancer cases without any evidence of the existence of HPV as causal organism. This may provide evidences to adjust and standardize all the available diagnostic kits to be more reliable for a wide spectrum check of HPV genotypes (Sin et al., 2014).
One more additional point, is the presence of HPV among 4 (30.8%) cases with normal cytological smears, which may be an inquiry to search for the any suspected participation of HPV in the initiation of future abnormalities among Saudi females, especially if we consider the appearance of these non-classical genotypes; 33 and 52, among cells with inflations. Similar findings which prove the role of these new genotypes were reported in this regard in the Middle East communities (Darnel et al., 2010) and elsewhere (Bruni et al., 2010; Sawaya et al., 2000). Based on the previously mentioned studies, this research finding totally agrees with the fact that the occurrence of cervical neoplasia among Saudi female is scanty compared to different part of the world. On the other hand, this study proved the existence of new genotypes beside HPV 16 (HPV 33 (33.3%), HPV 52 (16.7) and HPV 58 (16.7%)) which were not previously observed in this region. However, Darnel et al., 2010, suggested that HPV 33 could be the most dominant genotype responsible for this condition in the Middle East followed by genotypes 18 and 16 respectively (Darnel et al., 2010). These findings prove that there are genotypes other than 16 and 18 in charge of causing cervical cancer among Saudi women, a point that should be considered by researchers and specialists in the medical field, putting into consideration the impressive scanty distribution of HPV in this region.

Our results suggested decreasing prevalence of precancerous epithelial lesions in routine cervical screening samples (5.4%), with scanty occurrence of HR-HPV compared with findings elsewhere. Thus, future research may concentrate on other HR-HPV and/or LR-HPV genotypes, which are currently not proved for this region. However, molecular tools provide an accurate and reliable tool for early detection in the population at risk and are recommended for routine screening.

This work was funded by the Deanship of Scientific Research, Taibah University, Al-Madinah Al-Munawarah, Kingdom of Saudi Arabia (Grant no. 1435/6303).