Evaluation of epidemiological factors of the bacterial pharyngitis in children in Shouk Al-Kameesh, Al-Khoms, Libya

Pharyngitis is an inflammation or irritation of the pharynx or palatine tonsil. The etiology is usually viruses which cause the majority of the pharyngitis but most bacterial cases are attributed to group A Streptococci (GAS). This study aimed to identify the frequency of bacterial pharyngitis especially GAS of children, according to epidemiological factors. Symptoms present and signs for each patient were recorded, following which a throat swab was collected. There were 237 cases of  children aged between 1 and 14 years with inflammation; out of 394 cases that visited the ENT primary care at  Souk Al-Kameess during the 12 months study period. From the incidence of 394 sore throat cases,  GAS was observed in 237 cases (60.15%). Of these 110 (46.41%) were girls and 127 (53.59%) were boys. A higher proportion of children were found with GAS pharyngitis aged 5-9 and the lowest incidence of sore throat occurrence was 3-4 years. The highest incidence of children pharyngitis was recorded in January (Winter) and September (Autmn). The following factors showed independent positive correlation with GAS sore throat infection; patients visiting, months, year season, tonsillectomy, culture result, catalase test result and bacitracin test result with significant value of P<0.01, whereas sex, age and gram stain results with PËƒ 0.01. In conclusion, the results of this study found that cases of bacterial sore throat were higher than non-bacterial sore throat. The main cause of bacterial pharyngitis was GAS. Therefore, this study suggested that the use of the effectiveness of antibiotics and recommended anti-bacterial pharyngitis therapy to prevent initial rheumatic fever and its complications.

The most common etiology for Pharyngitis is by viral upper respiratory transmission. However, inflammatory processes  of  the nasopharynx are  pharyngitis and tonsillitis can be caused by bacteria (Lin et al., 2003). The bacteria that cause pharyngitis and tonsillitis are beta-hemolytic Streptococcus
and Staphylococcus aureus
(Bhalla et al., 2019). Bacteria cause erythema of the nasopharynx mucosa along with an exudative membrane (Leung and Kellner, 2004).
Most bacterial cases are due to group A Streptococci (GAS) infection (Van Schoor, 2013). Other causes include allergic reaction, trauma, toxin and neoplastic (Hildreth et al., 2015). Symptoms may include a sore throat, fever, headache and a hoarse voice (Rutter and Newb, 2015). Gonorrhea, fungus, irritants such as smoke, allergies and gastro esophageal reflux cause Pharyngitis. Pharyngitis occurs mostly by people contact with nasal discharge, rather than by oral contacts (Kirkpatrick, 1996). Approximately 7.5% of people have a sore throat in any full three-months (Principi et al., 2013).
Identifying the cause of pharyngitis, especially group A Beta-Hemolytic Streptococcus (GABHS), is important to prevent the potentially life-threatening complications (Singer, 2001). Strep throat is a bacterial infection, which is the cause in about 25% of children and 10% of adults (Hildreth et al., 2015). An estimated 616 million cases of GABHS pharyngitis occur annually worldwide (Carapetis et al., 2005).
Rapid diagnosis and treatment of pharyngitis and tonsillitis patients with unnecessary antibiotic prescriptions in primary health care center lead to high costs and increased risk of antibiotic-resistance. Pharyngitis and its epidemiological factors are a public health problem. Since there is no such study in this area, this research was done in Souk Al-kamees, Libya. The aim of this study was: (i) to identify the frequency of childrens’ pharyngitis in Souk Al-kamees, Libya, (ii) to study the epidemiological factors of pharyngitis according to gender, age, seasonal variation, history of tonsillectomy and associated disease among the survey population, and (iii) to identify the bacterial pharyngitis especially GABH among the study population.

Study design
A study designed to be prospective of suspected cases of pharyngitis. The preliminary data collected by questionnaire from Souk Al-Kamees outpatient clinic, Alkhoms, Libya. The study was conducted for 12 month (February 2018 - January 2019). The study population age ranged between 1 and 14 years of those attending Souk Al-Kamees outpatient clinic with a suspected case of pharyngitis with throat-related complaints (sore throat).
Moreover, patient demographics clinical data include age, sex, race, blood sample, and patient symptoms were recorded. The samples were collected by the throat swab from just above the tonsils of an infected throat of the patients. The sample was immediately placed in a nutrient broth and incubated at 37°C for 24 h. The samples were transported to the laboratory for culture and identification.
Methods
The collected  swabs  from  the patients were cultured on the Blood agar and incubated at 37°C in an anaerobic incubator for 24 to 48 h. The colonies were tested with Gram stain for morphology and identification (Biomaghret, Tunisia). Biochemical tests like catalase test were done with the slide test for the identification of Group A beta hemolytic Streptococcus. A bacitracin disc was added to a plate of blood agar to find the GABH sensitive to bacitracin (huge inhibition occurred around bacitracin disk). Streptococcus pyogenes are sensitive to bacitracin (Pires et al., 2009). The ASO serological methods like latex agglutination for the qualitative and semi-quantitative measurement of antibody to anti streptolysin-O in human serum were done (Biomaghret, Tunisia). The collected data were analysed by SPSS software version 1.3 and significance level of P< 0.01. 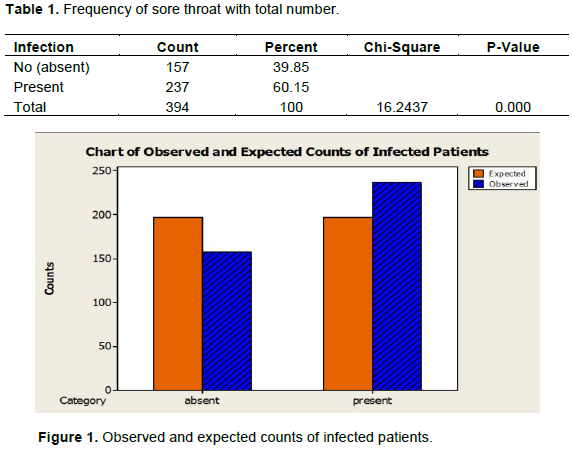 Sore throat is still the most common reason for visits to physicians. In the present study the percent of sore throat from total number of visitor equals 60.15%. Similar result was found by Bisno et al. (2002) in America and also in another study by Linder and Stafford (2001).
In this study, the culture result shows the occurrence of bacterial pharyngitis in children was more than nonbacterial pharyngitis by 50.2%. Results have shown that the pharyngitis by GAS is the most common as a bacterial cause of pharyngitis in children by 45.6%. Previous studies have shown exudative pharyngitis in children with acute Streptococcal infection 86% in Spain (Baquero et al., 1999) and 54% in Latvia (Zavadska, 2010). Another study showed that the GAS disease prevalence ranged from 21.4 to 27% among children aged 1-15 years in northern Taiwan (Lin et al., 2003). In contrast, a study carried out by Chi et al. (2003) showed that virus caused most acute pharyngitis and that GAS pharyngitis was uncommon in Taipei and Jos, Nigeria. Previous reports have also shown that Streptococcal throat carriage rate was 9.78%  amongst  primary  school pupils in Benin, Nigeria (Sadoh, 2001).
The highest occurrence rate was in the 5-9 years age group. This might be due to high exposure to the outer environment and lack of awareness. Several previous studies show similar results as pharyngitis is the highest at age 5-15 year by 37% in England (Bisno, 1996; Pichichero, 1997; Pickering et al., 2000). Evidence suggests that the prevalence of infection in this age-group may be due to the increased activity of children, giving a higher chance for the exposure to infection (Saleh, 2009). Besides, this school-age children may be making contact with each other in classrooms leading to increased infections. In the current study, an occurrence of pharyngitis in children among boys was 53.6%, compared to 46.4% in girls. A study in Sabha, Libya done by Soliman (2012) showed the pharyngitis infection rates for males was 64.3% and that of females was 35.7%. In contrast, a study in Syria found that distribution of pharyngitis in male was 47.4% and female was 53.6% (Cherith et al., 2005).
A monthly comparison showed that January (16.5%) and September (13.9%) contain the highest rate of occurrence of acute pharyngitis in children. While the lowest rate of occurrence of acute pharyngitis in children occurred in March (3%) and April (3.8%). In addition, the acute pharyngitis in children peaked twice during year in autumn 37.6% (November, October and September) and winter by 30.8% (December, January and February). This results may be due to children staying mostly indoors in crowded conditions, which may increase the rate of transmission of infection. In a similar study in Benghazi by Alhouni (2005), the peak incidence of infection was reported in winter and autumn. In contrast, previous studies in Taiz/Yemen by Saleh (2009), found the highest prevalence during winter season (November and December) as well as rainy season (July and August). In north India, a study by Nandi et al. (2001) showed that the relative incidence was higher during the winter (November to January) and rainy (August) months.
In the current study, results have shown that fever, cough, and running nose were the highest symptom among children with acute pharyngitis  (64% of fever, 47.7% of cough and 43% of running nose). A study in Benin city showed fever and inflamed tonsils/pharynx were the most frequent signs or symptoms occurring in 89.04 and 87.67%, respectively (Wilson, 2008). Another study in Latvia showed pharyngeal erythema and fever were prevalent up to 90 and 85%, respectively (Zavadska, 2010).
The results of the study showed that only 23 patients out of the total number of patients have tonsillectomy, usually a viral sore throat, which means that the operation of tonsillectomy reduces the occurrence of pharyngitis in children. Similar to a study in Finland by Alho et al, (2007) reported that the tonsillectomy reduces the number of acute pharyngitis and symptoms.
Antistreptolysin-O (ASO) test is an accurate diagnosis of pharyngitis and, is necessary to rule out group A streptococcus (Vintilescu et al., 2020). In this study, the positive result of ASO titer is 46%; this percent represents previous infection by GAS and negative result by 54%. In similar study by Stollerman and Dale (2008), the ASO titer significantly elevated over normal levels during a Streptococcal infection. Therefore, the ASO titer is the standard serological assay for confirmation of Group A Streptococcal infection.