Viral hepatitis is a serious public health problem affecting billions of people globally. Limited information is available on this issue in Cote d’Ivoire. The objectives of this study were to determine the prevalence and factors associated with hepatitis B virus (HBV) and hepatitis C virus (HCV) during an active screening campaign in Abidjan. A cross-sectional study was conducted at Pasteur Institute of Cote d’Ivoire from July 2015 to February 2016. The ethical clearance for this study was obtained from the National Ethical and Research Committee. An informed written consent was obtained from the participants of the study and administered a questionnaire related to the socio demographical information and risk factors of a possible route transmission HBV and hepatitis C virus (HCV). Blood samples were collected for the detection of HBS Ag, Ab-HBc IgG and Ab-HCV. Serological analyses were performed by Cobase 601 (RocheR). Data were analyzed by R software. A total of 1801 patients were recruited; among them 138 children (7.7%) aged from 0 to 15 years and 1663 adults (92.3%). The sex ratio was 1.2 (964/837). The overall prevalence of HBsAg was 30. 9% (557/1801) and 41.1% (702/1708) for Ab–HBc IgG. About HCV, the overall prevalence rate was 5.3% (95/1687), none of the children was HCV positive. The co-infection HBV/HCV rate was 0.95% (16/1687). HCV was associated with age and sexual risk behaviors. HBV was associated with gender, youth, sexual risk behaviors, and scarification. Our findings revealed a high prevalence of HBV. The measures to reduce the disease and its load transmission must be strengthened.

According to the World Health Organization, more than 240 million people are infected with the hepatitis B virus (HBV) worldwide, and the majority lives in developing countries (WHO, 2013), such as Côte d’Ivoire. Every year, there are more than 600000 deaths due to the complications related to the infection. HBV’s association with liver diseases, such as the primary liver carcinoma and cirrhosis, is clearly established (Hammad and Zaghloul, 2009). HBV and HCV are easily transmissible through sexual, parenteral, and vertical routes (Pozzetto and O. Garraud, 2011). Several behavioral, environ-mental, and cultural factors may also be responsible for these infections (Kramvis and Kew, 2007). In Africa, after the vertical and sexual transmissions, HBV and HCV infections are due to cultural practices (levirate, sorority, sexual rituals, scarification, piercing, and tattoos) or medical surgeries (Simpore et al., 2007). Several authors have reported different prevalence of HBV and HCV among sub-populations in Cote d’Ivoire with estimates which vary according to the studied population and methods that are used. In fact, the authors reported that 12.1% HIV co-infected children (Rouet et al., 2008), 3.2% children without HIV; 7.53% blood donors; and 17.6% hemodialysis patients were seropositive for HBs Ag (Kouassi-M’Bengue et al., 2010, 2012, 2013). For HCV infection, the authors reported that 2.5% among blood donors (Kouassi-M’Bengue et al., 2012) were seropositive. However, there is no reliable national survey of HBV and HCV exposure in the population is most likely to benefit from the early detection, surveillance and treatment. Given this gap in our understanding of HBV and HCV in Cote d’Ivoire, we launched an active screening campaign in Abidjan in collaboration with the National Hepatitis Infection Control Programs and the support of a private partner.
The aim of this study was to determine the prevalence and factors associated with HBV and HCV in Abidjan (Cote d’Ivoire).

A partnership of five years (2015-2020) was signed between Cote d’Ivoire government and an international pharmaceutical laboratory. As a result of this contract, Pasteur Institute of Côte d'Ivoire (IPCI), hosting the National Reference Center (CNR) of viral hepatitis, has been designated as a technical implementation partner. A national awareness campaign was launched through the media to get a larger sensitization of the whole population.
A cross-sectional study was conducted at IPCI from July 2015 to February 2016. Voluntary patients or subjects addressed by healthcare staff to IPCI were enrolled in the study.  The subjects responded to a range of questions such as  socio demographic information, such us age, marital status, profession, educational background (literacy, schooling), knowledge about hepatitis B and C virus, site of living; other data on the risk factors of the  possible route of HBV and HCV transmission like the sharing of toothbrush and cutting objects, sexual risk behaviors, history of blood transfusion, tattooing or piercing body, scarification, and the history of HBV vaccination was obtained. Blood samples were collected for the detection of HBS Ag, Ab-HBc IgG and Ab-HCV. Serological analyses were performed by Cobas e 601 (Roche R).
Ethical issues
The ethical clearance for this study was obtained from the National Ethical and Research committee. We obtained an  informed  written consent from all participants of the study. Biological parents or relatives have given their consent for infants.
Data analysis
Data were entered into Epi Info 3.5 and analyzed by R sofware. Qualitative variables were compared using the Fisher exact test and quantitative variables by analysis of variance. A percentage with 95% confidence interval (CI) was used to describe the prevalence. OR with 95% CI was calculated for each association. A p values less than 5% was considered as significant. 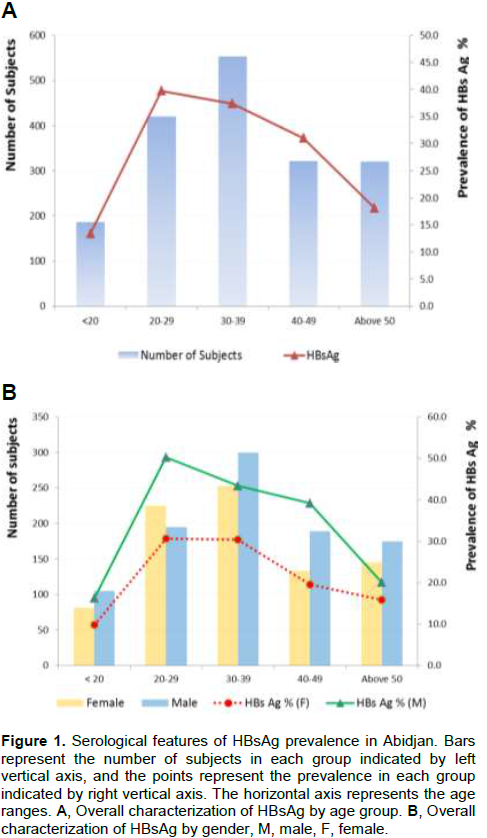 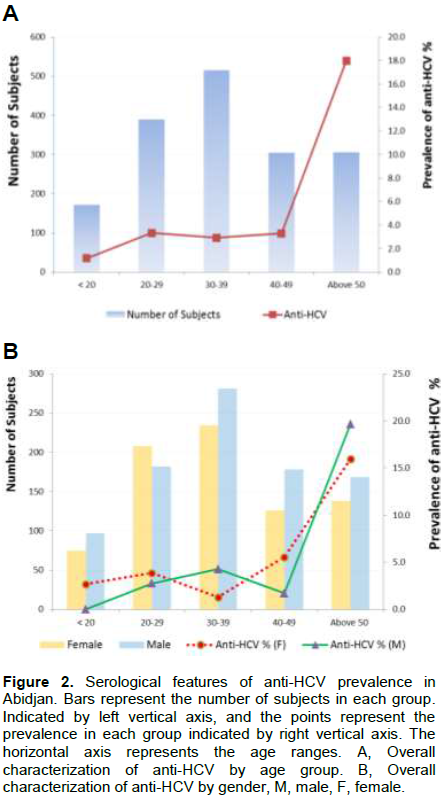 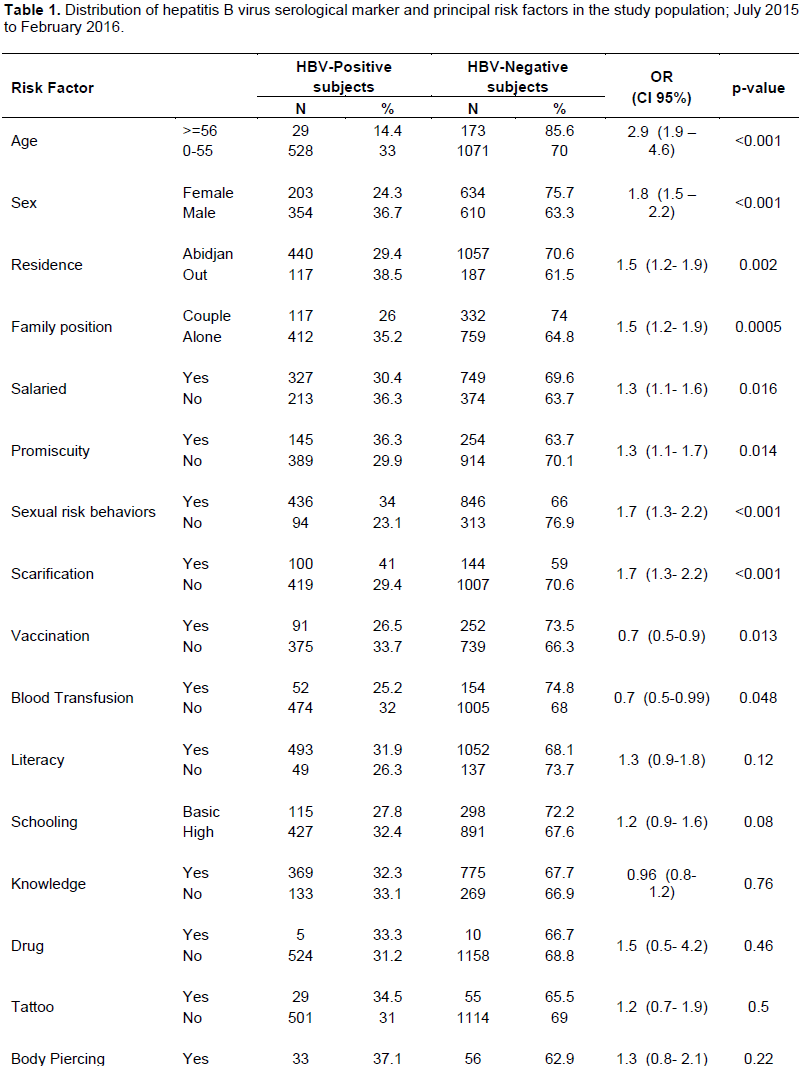 Table 2 lists the frequency of potential risk factors reported by groups reactive or not with HCV-ab. Factors significantly associated with HCV infection were increasing age (OR =10.6; p<0.001)  literacy (OR=3.5; p<0.001), schooling (OR= 2.5, p<0.001), living in Abidjan and family position. Conversely, no association was observed between HCV seropositivity and gender, tattooing, and sexual risk behaviors. 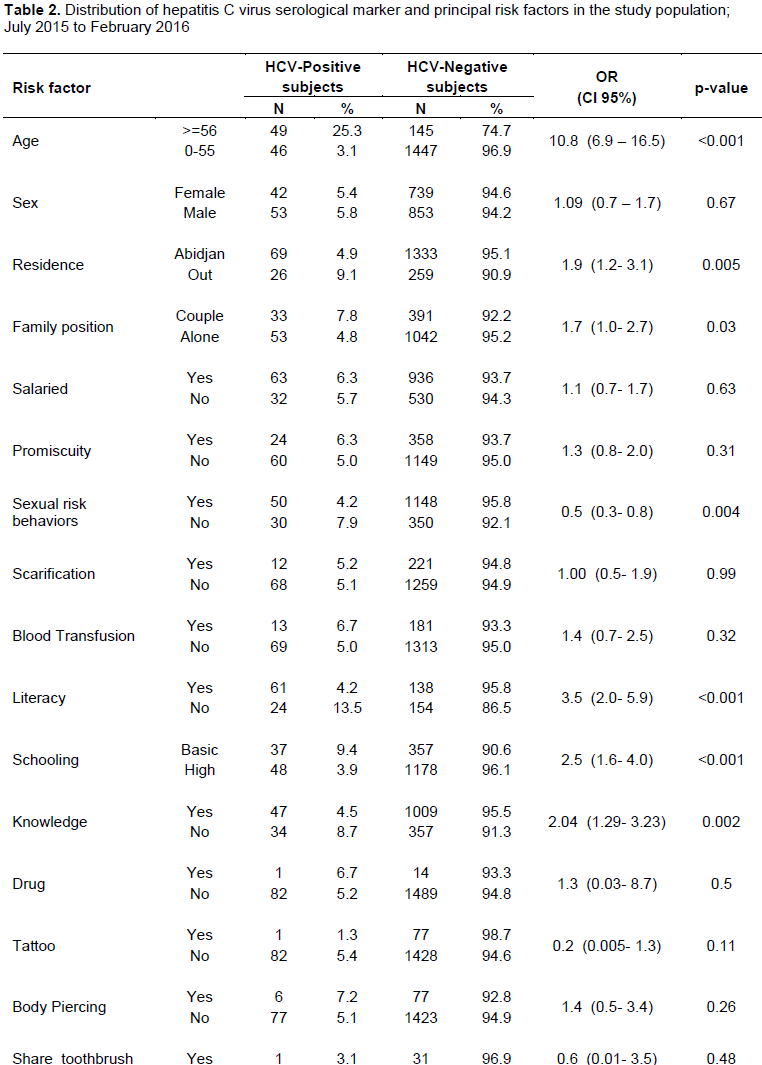 A cross-sectional study to assess the epidemiology of HCV and HBV prevalence among the general population living in Abidjan and other cities in Cote d’Ivoire was reported. To the best of our knowledge, this is the largest community-based epidemiologic study of HCV and HBV infections from Cote d’Ivoire during a national continual screening campaign. Most of the previous studies in this field were limited due to the short duration of the survey and scarce sample of populations (Assi et al., 2011). Thedescriptive epidemiologic data presented in this study can provide new insight into the contribution of HCV and HBV in the etiology of the liver disease in Cote d’Ivoire.
Data analysis revealed a very high prevalence (30.9%) of hepatitis B and confirmed a relative mean prevalence (5.3%) of hepatitis C. These results show a higher HBV and HCV prevalence than in the target groups as reported by other studies. So, Adoba et al. (2015) reported a prevalence of 14.5 and 0.5% for 200 barbers in Ghana; Coppola in a retrospective review study notified 0 to 15% HBV for immigrant coming from sub-Saharan Africa (Coppola et al., 2015); even in a retrospective study concerning 578 patients with chronic hepatitis conducted in Ethiopia, 22.3 and 3.6%, respectively for HBV and HCV were reported (Taye et al., 2015). However, regarding the rate of HCV, our results are lower than hemodialyzed and thalassemia patient with 33.5 and 37.1%, respectively (Malhotra et al., 2016; Ramadan et al., 2016).
Nevertheless, our rates are lower than the ones reported by Robert et al. (2016); in a population of HIV seropositive men which make sex with men with 49.4% for HBV and 10.4% for HCV. This high prevalence can be explained by the fact that it was the first year of national screening campaign and many people are interested. However, many patients are involved by medical prescription. A study realized in Kenya had recruited 389 patients with jaundice; HBs Ag seropositive was 50.6%, higher than our work (Missiani et al., 2016). Another study in Cameroon, concerning 97 hemodialyzed patients reported 6.2 and 20.6% seroprevalence for HBV and HCV (Halle et al., 2016).
This study also revealed a high rate of seropositivity to Ab-HBc-Ig G without any detection of HBs Ag in 41.1% cases. In this work, we did not research anti HBs, so our interpretation of these cases is a prior contact with HBV. The detection of the anti HBs Ab would have allowed us to decide between a passive immunization or the hypothesis of occult hepatitis. Concerning HBV and C co-infection, our prevalence was similar (0.9 vs. 0.2%) to that reported by Ojide in Nigeria (Ojide et al., 2015). The virological and molecular aspects of HBV/HCV coinfection are poorly comprehended. Although, liver disease activity and progression are generally more severe in the presence of double infection, an inverse relationship in the replicative. Levels of the two viruses exists, suggesting direct or indirect (that is, mediated by host immune responses) viral interference (Raimondo et al., 2008).
The analysis by gender has revealed that the seroprevalence of hepatitis B among males is significantly higher than that found in females. Our study is consistent with the results obtained by Deng et al. (2013) in 2013 in China (6.54% compared 3.87%) and Makuwa et al. (2009) in Gabon in 2009 (16.2% compared 9.9%); and no plausible explanation has been given for the higher rate in males in the general population but probably due to the higher exposure to occupational HBV risk factors in men, or else females clear the HBV more efficiently as compared to males.
Age group of 16 to 55 years is the most affected (35%), compared to the older (14.4%). These results show that young people are the most affected by HBV, p<0.001. These results are similar to those of Makuwa et al. (2009) who reported a prevalence of 22.22% among young men in the same age group in urban areas of Gabon. The low prevalence of individuals in the age group above 50 years of age could indicate that several people in this group might have died from cirrhosis or liver cancer due to the lack of medical care.
Regarding HCV, the higher prevalence was observed in advanced age groups; indeed, no anti-HCV seropositive case was found in 138 children younger than 16 years, nevertheless, the seropositivity increased progressively from adults (3.8%) to older persons (18%). The higher prevalence of HCV in older people could be attributed to a longer exposure to risk factors for HCV transmission; for instance iatrogenic transmission resulting from inadequately sterilized equipments, inappropriate use of supplies, etc. This risk factor is considered as the main risk associated with HCV infection in majority of the participants from the general population included in this study. This same risk is the primary cause for HCV transmission in many outbreaks documented in the United States and the European Union Heath care (Centers for Disease Control and Prevention, 2011; Rantala, 2008).
This study also reports an HBV carriage in 12.3% of children under 16 years; a significant difference was observed between younger (0-5 years) and older children (6-15 years), (7.3% vs. 14.4%) p=0.25. At this stage, the study cannot demonstrate the evidence of a vertical transmission or a horizontal infection. In fact, some traditional practices could explain the high prevalence of HBV in children, particularly, mothers using saliva to heal baby’s wound. However, vertical transmission probably plays an important role, as in Cote d’Ivoire, no efficient action (HBV free screening during pregnancy, vaccination at birth and not at six weeks) is taken to fight against it.
The lack of significant difference in the prevalence of HBV among people when taking into account their history of blood transfusion can be explained by the improvement of blood safety in Cote d’Ivoire. In fact, HIV, hepatitis B and hepatitis C, and the bacterium Treponema pallidum subspecies pallidum are routinely detected in blood donations. However, the prevalence of 25.2% of HBV among transfused persons to 32% in non-transfused shows that the contamination by a residual risk of blood transfusion remains (Ouattara et al., 2006).

This study reports a high  prevalence  of  HBV  and  HCV carriage in Cote d’Ivoire. The results of our study showed that youth, gender, sexual risk behaviors, scarification, living out of Abidjan in one hand and in the other hand old age, sexual risk behaviors, literacy, schooling are the common risk factors for transmission, respectively of HBV and HCV infection in the community. A better organization and increased awareness campaigns on HBV and HCV will reduce their prevalence. The measures to reduce the disease and its load transmission must be strengthened.