Traditional medicinal plants claim many traditional uses across different parts of the world. In Ethiopia, it remains the main source of treatment for the majority of human population and livestock. The aim of this study was to evaluate antibacterial activity of crude extracts of some traditional medicinal plants commonly used for traditional human medication in selected localities of Jimma Zone, Southwest Ethiopia. Data on ethno-botanical information and traditional uses of medicinal plants were gathered using semi-structured interview questionnaire involving a total of 30 experienced respondents of the study area.  Candidate traditional medicinal plants were collected from Sigmo District of Jimma Zone, South western Ethiopia, labeled, processed, and extracted in accordance with standard procedures and the plant samples were deposited at Herbarium of Jimma University, Ethiopia. Antibacterial activities and minimum inhibitor concentration (MIC) of petroleum ether, chloroform and methanol extracts of leaves and stems of three frequently used plants [Kosteletzkya begonifolia, Leucas martinicensis, and Ranunculus multifidus] were evaluated against Staphylococcus aureus DSM 7346, Pseudomonas aeruginosa DSM 1117, Escherichia coli ATCC 25722 and Salmonella typhimurium ATCC 13311. Phytochemical constituents of the extracts were determined following standard analytical procedures. Results revealed that leaves were the most frequently used parts of the three medicinal plants. They are usually used for the treatment of tooth ache and gastro-intestinal ailments. The highest antimicrobial activities were observed in petroleum ether extract of K. begonifolia stems against S. aureus [Inhibition Zone (IZ), 28.3-30 mm], P. aeruginosa (IZ: 27-28.67 mm), E. coli (IZ: 28.3-31 mm) and S. typhimurium (IZ, 28-30.3)]. The extract displayed activity significantly closer to that of the control antibiotics, ciprofloxacin (IZ, 30-35 mm). Likewise, chloroform extracts of leaves of R. multifidus and methanol extracts of L. martinicensis displayed strong activities against S. aureus (IZ, 26.67±0.8 mm) and E. coli (IZ 26.67±3.3 mm), respectively. The lowest MIC observed in the current study was 5.6 mg/mL and recorded for both petroleum and chloroform extracts of leaves of R. multifidus, L. martinicensis, and K. begonifolia against S. aureus. The observed antibacterial activities could be accounted to combinations of phytochemical compounds isolated from the test plants including alkaloids, tannins, flavonoids, terpenoids and cardiac glycosides. Leaves of the three traditional medicinal plants evaluated in the current study displayed promising antibacterial activities against bacterial test strain. However, the highest activity was observed in petroleum ether extract of stems of K. begonifolia against all test strains with Inhibition Zone (IZ) diameter ranging between 28-31 mm. Further toxicity and pharmacokinetic study are recommended.

Plants represent a rich source of antimicrobial agents and have been used medicinally in different parts of the world. Plant based traditional medicine plays an essential role in human medication, with significant numbers of world population relying on traditional medicines for their primary health care (Owolabi et al., 2007). In spite of the great advances achieved in modern medicine, thousands of rural communities in developing countries still dependent on folklore medicine to cure diseases mainly because of economic and cultural factors (Kamatenesi and Oryem-Origa, 2007). However, such plants should be investigated for better understanding of their properties, safety and efficacy to develop alternative antimicrobial drugs (Khulbe and Sati, 2009). Accordingly, the utilization of plants for the production of natural or recombinant compounds of commercial interest has gained increasing attention over the past decades (Canter et al., 2005). Furthermore, in the era of high pressure from emergence of microbial drug resistance and limited therapeutic efficacy of many of the available drugs, search for potent antibacterial drugs with new modes of action should be given emphasis. Local medicinal plants are potential source of novel antimicrobial agents and anti-Quorum sensing substances (Bacha et al., 2016).
According to Abebe (2011), traditional remedies are the most important and sometimes the only source of therapeutics for nearly 80% of the population and 95% of traditional medicinal preparations in Ethiopia.  Despite the use of traditional medicine over many centuries, relatively small numbers of plant species have been studied for possible medical applications and the source of information is largely limited to indigenous societies (Cunningham, 1993).
Ethiopia is a country known for its rich plant biodiversity and tradition use of plant based drugs for curing or treating of many human and animal diseases. Reports indicate that more than 35,000 plant species are being used for medicinal purposes all over the world (Lewington, 1993). In Ethiopia alone, 800 plant species are estimated to be in use for traditional medication (Tesema et al., 2002). Likewise, WHO estimates that majority of the population in developing countries, including 90% of African population; rely on traditional medicinal plants for their healthcare (WHO, 2002).
Sigmo District is located in Jimma zone, Oromia Regional state, Ethiopia. Though large part of the district is covered with forest and could serve as potential source of traditional medicinal plants, scientific information on the availability and practice of the use of traditional medicinal plants are lacking. On the other hand, food borne infections have been one of the major public health concerns in many parts of the world, including the study site, accounting for considerably high cases of illnesses. Among the etiological agents, Pseudomonas aeruginosa, Escherichia coli, Staphylococcus aureus and Salmonella species are the major ones (Branham HYPERLINK "http://onlinelibrary.wiley.com/doi/10.1111/j.1745-4565.2006.00052.x/full"et alHYPERLINK http://onlinelibrary.wiley.com/doi/10.1111/j.1745-4565.2006.00052.x/full., 2005; Dabassa and Bacha, 2012). The current study was designed to evaluate the antibacterial activities of the frequently used traditional medicinal plants in the study area. Accordingly, three of the traditional medicinal plants labeled as Kosteletzkya begonifolia (Ulbr.) Ulbr, Leucas martinicensis (Jacq.) R.Br. and Ranunculus multifidus), were characterized for their antibacterial activities. 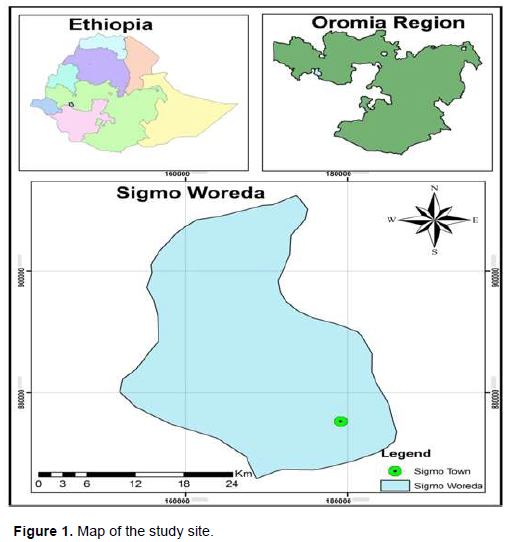 Collection of ethno-botanical data
Traditional Medical Practitioners (TMP's) and experienced elders were the main informants during collection of ethno-botanical information of the used traditional medicinal plants in the current study. A total 30 informants (11 TMP's and 19 other community members) were interviewed using semi-structured interview questionnaire. Accordingly, data on the plant parts being used, preparation techniques and administration of plants for management of common food and water borne diseases were collected. To ease the interview processes and get the detailed information without any language barrier, both interview and focus group discussions were conducted using local language having translated content of the interview questions into local language (Afan Oromo).
Collection and preparation of plant material
Having established the commonly used plants in the study area, the stems and leaves of three dominant plant species were collected using plastic bags and transported to Botanical Science Laboratory of Jimma University for identification. Having identified and labeled with the necessary botanical information, voucher specimens were deposited at herbarium of Jimma University, Department of Biology. The collected plant materials (stems and leaves) were dried under shade and grinded to appropriate size using mortar and pestle prior to extraction.
Plant extraction
Soxhlet extraction method was used for plant matter extraction (stem and leave). Briefly, 50 g of powdered plant material was weighed and packed into thimble placed in a glass.  A reflux condenser and a round bottom flask with 500 ml solvent (starting with petroleum ether) was fitted above and below the thimble holder, respectively. Then, continuous extraction was carried for a period of at least 6 h until the extract becomes colorless. The solvent was removed from each extract by Rotary Evaporator under reduced pressure and temperature (£ 40°C). The concentrated crude extract was then added to 50 ml beaker and the remaining solvent was evaporated under reduced pressure followed by storage in a refrigerator (+4°C). The extraction was continued in the same way using same volume of two other solvents separately (chloroform and methanol) (Mulat et al., 2015).
Antibacterial activity assay
The antibacterial activity assay was evaluated using agar disc diffusion and micro-dilution broth assay techniques as described in Mackeen et al. (1997) and Komuraiah et al. (2009), respectively.
Agar disc diffusion assay
Four bacterial strains, including S. aureus DSM 7246, Salmonella typhimurium ATCC 13311, P. aeruginosa DSM 1117 and E. coli ATCC 25722, were used for the assay. The bacterial strains were activated overnight at 37°C prior to testing. Test solutions were prepared by dissolving 0.2, 0.1 and 0.05 g of plant extracts in dimethyl sulfoxide (DMSO) to achieve final stock concentrations of 200, 100 and 50 mg/mL, respectively. Sterile Whatman filter paper discs (6 mm diameter) were evenly placed on Mueller Hinton agar plate surface previously swabbed with an overnight activated culture of the test strains whose turbidity was adjusted to 0.5 McFarland standards. Then, 30 μL each of the test sample was loaded onto duplicate discs. Standard disc of ciprofloxacin (10 μg/disc) and paper disc loaded with 30 μL of DMSO were used as positive and negative controls, respectively.
The plates were then inverted and incubated for 18-24 h at 37°C. After incubation, clear zones around the discs (zones of growth inhibition) were measured and expressed as Means ± SD (mm) of two experiments.
Determination of minimum inhibitory concentration (MIC)
MIC of the crude extracts was determined as described by Komuraiah et al., (2009). Accordingly, extract that exhibited observable activity during antibacterial activity assay was further diluted in nutrient broth (to a concentration of 50 mg/mL, 16.6 mg/mL, 5.66 mg/mL, 1.8 mg/mL, 0.6 µg/mL and 0.2 µg/mL). Then, 0.1 mL (100 μl) of standardized inoculum (1 - 2 × 108 CFU/mL) was added to each test tube. The tubes were incubated aerobically at 37°C for 24 h. Control tubes were included in each test. The lowest concentration of extract that produced no visible bacterial growth (no turbidity) when compared to the control tubes was regarded as MIC.
Determination of minimum bactericidal concentration (MBC)
MBC was determined by sub-culturing the test dilutions onto a fresh agar plate (without extract) and incubated for 24 h. The highest dilution that yielded no single bacterial colony was taken as MBC.
Phytochemical screening
A small portion of the powdered plant extracts were used for phytochemical analysis (tested for the presence of plant secondary metabolites including alkaloids, tannins, glycosides, saponins, flavor-noids, steroids and terpenoids) following standard methods described earlier by Trease and Evans (1998).
Data obtained from both survey and experimental activities were analyzed using SPSS software (version 16:00 and Microsoft excel). Values were mean of duplicate experiments and statistical significance within in a category was evaluated using % coefficient of variation with values > 10% considered statistically significant. For mean separation, statistical significances were considered at p<0.05. 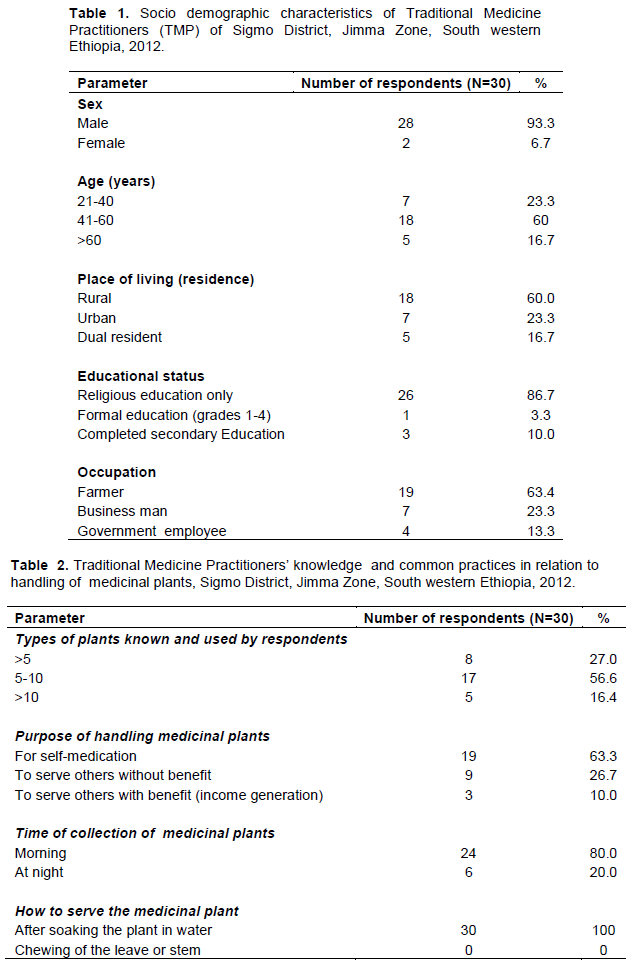 Ethno-botanical description
Among ten traditional medicinal plants rated for their frequency of use, three (R. multifidus, L. martinicensis, and K. begonifolia) were found the most preferred and frequently used traditional medicinal plants of the study site (Figure 2). Leaves of the three plants have been used to treat ailment of the gastrointestinal tracts (GIT) and oral cavity after simple soaking of the leaves in water and filtration (Table 3). 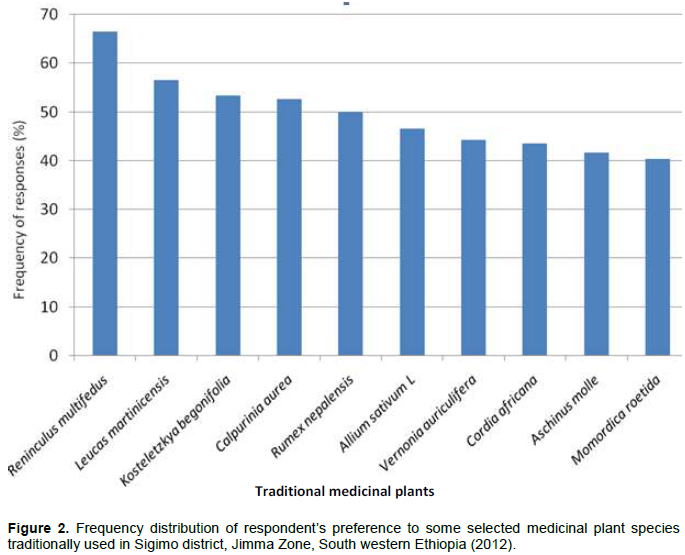 Antibacterial activities of leaves and stems extracts
Mean inhibition zone diameters of duplicate experiments for the three different concentrations of extracts (200, 100 and 50 mg/mL) are as summarized below (Tables 4, and 5). Accordingly, all the tested leave extracts displayed observable activities with mean inhibition zone diameter (IZ) ranging between 14.33 ± 2.33 to 26.67 ± 3.33 mm. Strong inhibitions were recorded for methanol and chloroform extracts of L. martinicensis and R. multifidus against E. coli (26.67 ± 3.33) and S. aureus (26.67 ± 3.33 mm) at 200 mg/mL concentration, respectively. Relatively, similar activity was observed even at 100 mg/mL concentration of petroleum ether extract of L. martinicensis against P. aeruginosa (24.00 ± 3.50). The least activity was encountered in chloroform extract of K.begonifolia against S. typhimurium (14.33 ± 2.33) both at 50 and 30 µg/ml (Table 4). 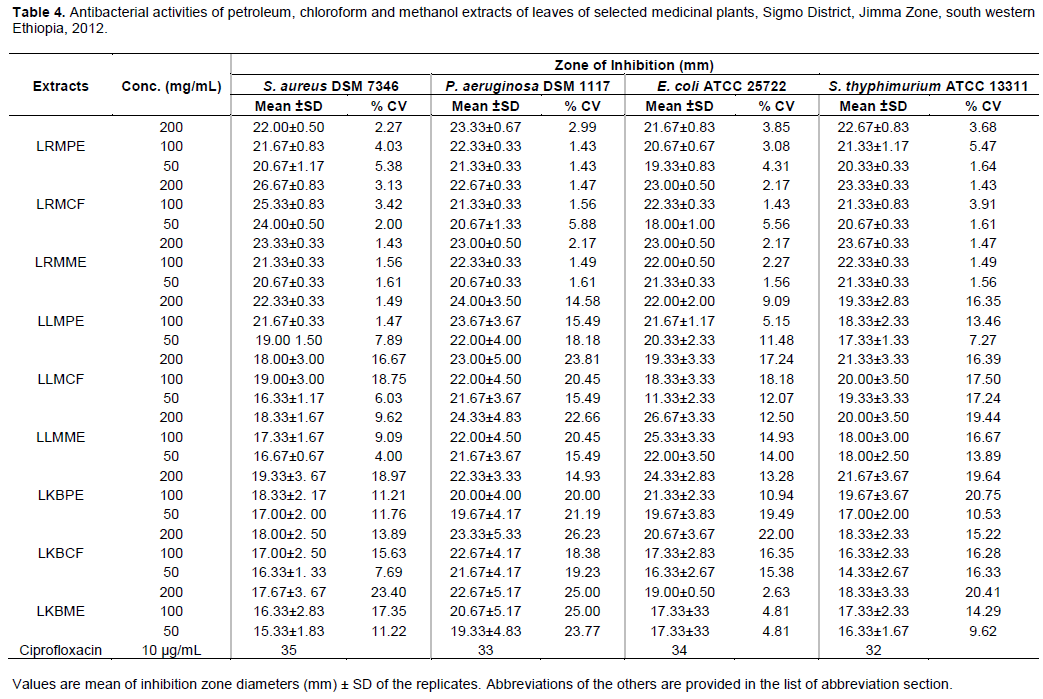 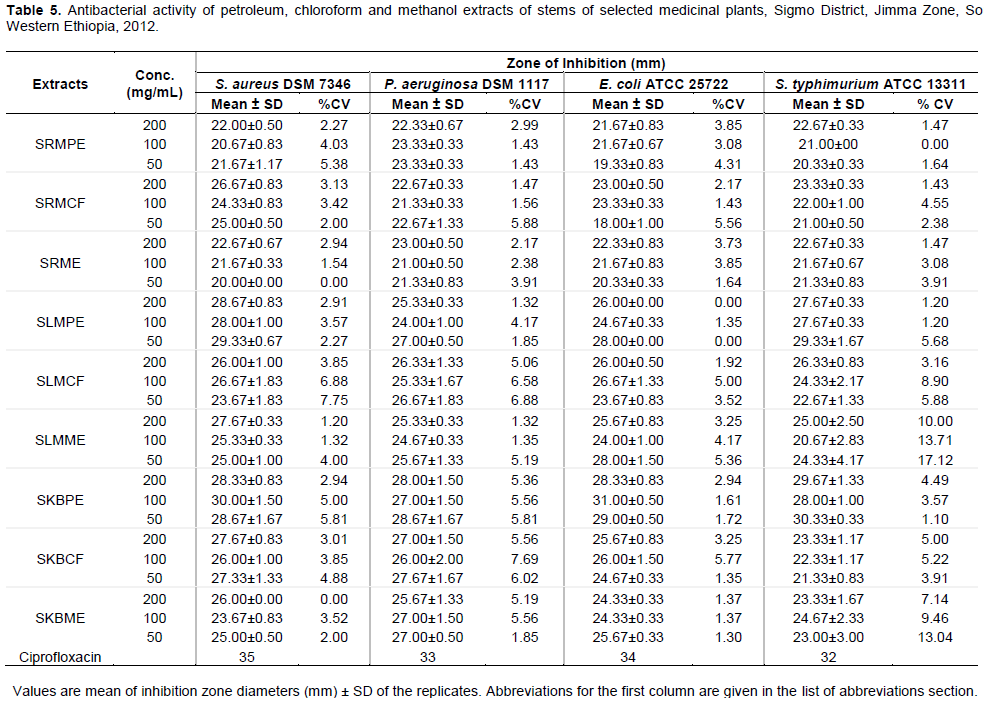 The traditional medicinal plants evaluated in the current study have shown promising activities against both Gram negative and Gram positive bacteria. The highest antimicrobial activities were recorded for petroleum ether extract of Kosteletzkya begonifolia stems against S. aureus [Inhibition Zone diameter (IZ), 28.3-30 mm], P. aeruginosa (IZ: 27 to 28.67 mm), E. coli (IZ: 28.3 to 31 mm) and S. typhimurium (IZ, 28 to 30.3)]. The extract displayed activity significantly closer to that of the control antibiotics, ciprofloxacin (IZ, 30 to 35 mm). The finding strengthens the fact that traditional plants could represent new sources of antibacterial substances with stable, biologically active components. As the bioactive substances present in the extracts of the study plants justify the rationale for the use of the same plants in traditional medicine, isolation, purification and structural elucidation of the bioactive constituents are recommended.

The authors would like to thank Jimma University for financial support.