Respiratory infection is one of the infections that can be transmitted in closed places due to the ease of transmission of pathogens from infected people to healthy people through droplets from coughing and sneezing, among these bacterial causes, Haemophilus influenza. Therefore, this study aimed to evaluate the prevalence of this type of bacteria among pilgrims coming from different geographical locations in the world and determine the antibiotic-resistant strains. Around 1226 nasopharyngeal swabs were collected from 613 pilgrims from several different nationalities before and after completing the Hajj. These specimens were cultivated on chocolate agar medium and the pathogens were identified according to Clinical Laboratory Standards Institute (CLSI) protocol and confirmed by an automated system machine (VITEK2). There is no H. influenzae was detected among pilgrims before performing Hajj and the rate of transmission of H. influenzae was 1% after performing Hajj. The most effective antibiotics against to H. influenza isolates from pilgrims was Rifampicin while all the isolates were resistant to ampicillin. The continuous monitorization of the rate of potentially pathogenic bacterial during the Hajj season is required in order to develop advanced strategies to confront any outbreak of any infectious disease among the pilgrims.

Hajj and Umrah season have been associated with the spread of respiratory infections between visitors and pilgrims, this is due to mass gathering resulting from the gathering of a large number of Muslims to perform Hajj rituals from all over the world in the limited geographical area and specific times (Lewnard et al., 2019). A number of health reports showed that respiratory infections were the most common health complaint among pilgrims and the first reason for hospitalization (Sarangi et al., 2000) (Farley  et   al.,   1992;   Shafi  et  al., 2008).  Respiratory infection and meningitis are important health problems, which are often associated with crowded places due to the ease of translation of the pathogens from the infected and carrier persons to healthy persons by droplets through the air (Madani et al., 2006; Asghar et al., 2011). These causes include Streptococcus pneumoniae, Haemophilus influenza, and Neisseria meningitidis, these bacterial pathogens are densely colonized in the human nose and mouth, along with many commensals bacteria which can turn into pathogens, especially in unhealthy living conditions (Slack, 2015; Memish et al., 2014).  Many studies, showed that the colonization of H. influenzae bacteria in the nasal playing a major role in the spreading of infections of the respiratory system (Whittaker et al., 2017; Ahmed et al., 2009). One of the factors that cause concern due to these health conditions during the Hajj season is the spread of bacterial strains that were not included in the vaccinations that the pilgrims receive before the Hajj and also the emergence of bacterial strains resistant to antibiotics which have become a major challenge to the health system in Saudi Arabia (Michael et al., 2019; Bozdogan et al., 2006; Stephen et al., 2007). Based on these facts, this study focused on one of the causes of respiratory tract infections, which is H. influenzae.  H. influenzae bacteria belongs to Gram-negative coccobacilli and include two major categories, encapsulated and unencapsulated strains. Encapsulated strains contain six serotypes are (a, b, c, d, e, and f) (Plumb et al., 2018; Harris et al., 2017). H. influenzae type b, (Hib) is the major virulence factor of this organism and causes pneumonia, meningitis, epiglottitis, and bacteremia (Soeters et al., 2018; Adam et al., 2010). Un-encapsulated strains are non-typable H. influenzae (NTHi) due to lack of capsular serotypes and less invasive.  Hib vaccine is effective in preventing Hib infection only but not effective against infection with NTHi strain (Romaneli et al., 2019). Therefore, this study aimed to evaluate the prevalence of this type of bacteria among pilgrims coming from different geographical locations in the world to determine the emergence of antibiotic-resistant strains, which would provide the basis for the adoption of appropriate preventive to limit the spread of these pathogens and control them.

The subject of the study
The current study included, 613 pilgrims from several different nationalities around the world; 90 hajjes from Libyan, 161 Indian, 68 Syrian, 102 Nigerian, 95 Indonesian, 35 Turkish, 46 British, 11 Australian, 2 Iranian, and 3 Swedish of the total number of pilgrims who performed the Hajj in the year 1432 AH corresponding to 2010, where the sample was selected in a statistically controlled manner by specialists in biological statistics, where the method of collecting a number of random samples was adopted, regardless of nationality, or gender.
Collection of samples
Around 1226 nasopharyngeal swab were collected from of 613 Pilgrims, one swab at arrival each pilgrim to Saudi Arabia and second swab after completing the Hajj, in addition to collecting data from these pilgrims including; date of collection, nationality, sex, age, coughing, smoking, antibiotic usage, contacts numbers. All specimens were collected on a sterile transport medium (Amie’s agar gel- Oxoid) and sent to the microbiology research laboratory in the faculty of medicine, where nasopharyngeal specimens insulated on  chocolate   agar   medium   under   aseptic  conditions  inside  a biological safety cabinet class 2 and the plates were incubated in a CO2 incubator at 37°C according to clinical and laboratory standards institute (CLSI).
Isolation and Identification of H. influenza
H. influenzae was isolated after an overnight incubation from chocolate agar as a mucoid colony, and the identification was confirmed by characteristic appearance and microscopically by Gram stain as a Gram-negative coccobacillus followed by the confirmatory tests of suspected colonies were subculture on nutrient agar with commercial diagnostic discs, nicotinamide adenine dinucleotide (factor V) and hemin (factor X). Isolated strains were confirmed by automated system (microbial identification system) VITEK2 Compact '' biomerieux''.
Antibiotics susceptibility testing
Susceptibility testing included numbers of antibiotics as the following: Azithromycin, Cefotaxime, Ceftriaxone, Ciprofloxacin, Levofloxacin, Ampicillin, Rifampicin, Clindamycin, Meropenem, Augmentin, chloramphenicol, and Trimethoprim-sulfamethoxazole, and conducted according to clinical and laboratory standards institute (CLSI) (CLSI, 2012, 2018).
Statistical method used in this study
Statistical analysis was done by an experienced biostatistician, using the latest statistical.
Ethics approval
We obtained the approval of the ministry of Hajj to carry out this study in addition to obtaining written consent from the heads of pilgrim groups and from every person participating in this study before starting to collect samples. 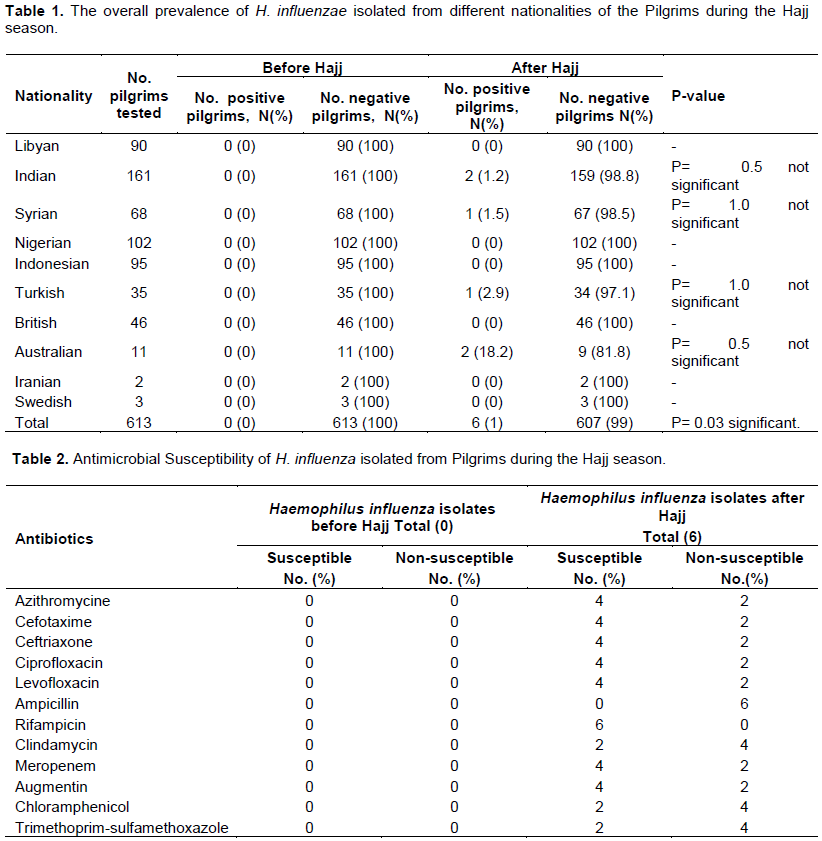 Hajj and Umrah are mass congregations that may put serious health hazards to visiting pilgrims and native residents via the transmission of infectious diseases especially the infections that may get spread via contact, respiratory droplet and with the influx of untreatable bacterial strains, this may lead to emerging multidrug drug-resistant strains, that may lead to outbreaks in mass congregations like Hajj and Umrah and generate resistant strains that may get a swift global and local transmission through Hajj and Umrah gatherings where was in the recent years there was a quick drop in antibiotics response against common infections. Studies showed that exposure to the mass gathering during the performance of the Hajj rituals had a role in infection with respiratory diseases and the acquisition of this bacterial infection and its spread among the pilgrims (Shiraha et al., 2017). Studies have shown that the colonization with potentially pathogenic bacteria such as H. influenzae is considered a major factor in respiratory tract infection and meningitis, and it is transmitted from infected persons or carriers (Gautret et al., 2015). Some studies also showed a difference in transmission rates, which were associated with factors including social, economic, and living conditions (Rubach et al., 2011). Two important factors of concern during Hajj season the first, emergence and spread of several antimicrobial-resistant strains such as; ampicillin-resistant H. influenzae, and antibiotic-resistant S. pneumoniae (such as; penicillin, macrolide, quinolone). The other factor of concern is the possible spread strains not included in the current vaccines administered to all pilgrims before coming to Saudi Arabia (Dworkin et al., 2007). Therefore, the World Health Organization recommends monitoring epidemics in such gatherings that may spread due to this mass gathering in these seasons, and to ensure that available vaccinations for these pathogens especially the causes of respiratory tract infections (Ahmed et al., 2009). In the current study, the bacterial isolates of H. influenzae were recorded after performing Hajj and none of them were proven before the Hajj on all the pilgrams who underwent this study. Can be concluded from this that the pilgrams of some countries were colonizing with the causes of bacterial infection, and with exposure to crowding they became a source of infection spread as the translation rate increased to (1%) after performing Hajj. The highest percentage was recorded among Australian pilgrims (18.2%), followed by Turkish pilgrims (2.9%), followed by Syrian pilgrims (1.5%) and Indian pilgrims (1.5%), respectively while other nationalities have not been infected with H. influenzae during the Hajj season, either before or after performing the Hajj. In comparison with some similar studies, the results of this study were lower in the number of isolated bacteria, compared to other studies that recorded higher rates (Nik et al., 2019; Blain et al., 2014; ChunCho et al., 2019; Sarangi et al., 2000; Farley et al., 1992). This may be one of the reasons that there are no epidemics during the Hajj season, and it may be due to taking antibiotics and getting vaccinated before going to Hajj. However, also, the results of the antibiotic susceptibility tests showed that the most effective antibiotics against H. influenzae isolate frompilgrims who have been shown to be infected with H.  influenzae was Rifampicin which was the sensitivity of the isolated bacterias (100%), while all the isolated strains were resistant to Ampicillin.

This study showed that being in crowded places increases the possibilities of transmitting infectious diseases among the participants. In the study, it was found that the level of bacterial carriage in the upper respiratory tract before performing the Hajj was very low, in other words, there are no H. influenzae detected among pilgrims before performing Hajj and the rate of transmission of H. influenzae was 1% after performing Hajj, the results of the susceptibility testing on the isolated bacterial strains showed highly sensitive to rifampicin while all the isolated strains were resistant to Ampicillin. So, the continuous monitorization of the prevalence rate of potentially pathogenic bacterial during the Hajj season is required in order to develop advanced strategies to confront any outbreak of any infectious disease among the pilgrims. These results should be subject to more detailed studies in the next Hajj seasons to evaluate the carriage rate of pathogenic bacterial strains in pilgrims and determine if any changes in the prevalence levels and the introduction of controls for this study by Saudi citizens to compare the prevalence rates of bacterial infection among pilgrims with Saudi citizens.