The efficacy of some fungicide alternatives as foliar spray was evaluated against bean wilt incidence under field conditions. The fungicide alternatives were indole acetic acid, gibberllic acid, Trichoderma harzianum, vitamins E and C, lemon grass, moringa leaf and thyme oils. The obtained results showed that the applied fungicide alternatives treatments could suppress the incidence of green bean wilt. In the light of the present study, a thought-provoking outcome of the following investigation was reached when the results clearly indicate that 100% suppression of the disease was reached when the bean plants were sprayed with a combination of indole acetic acid 40 ppm + gibberellic acid 40 ppm + T. harzianum 105 cfu/ml. Such an arrest in disease development decreased to 90.5 and 86.4% when the infected plants were treated with indole acetic acid 20 ppm + gibberellic acid 20 ppm + T. harzianum 105 cfu/ml and T. harzianum was combined with gibberellic acid 40 ppm, respectively. It could be hypothetically suggested that combined treatments between growth regulators with the bioagent as foliar spraying might be used practically for controlling such soilborne diseases replacing fungicides treatments.

The oldest known beans have been known since earliest historic times found in the 5th dynasty tombs where they are mentioned in one of Ramses II's paeans. In medicine, ancient Egyptians used beans in remedies against constipation, as a remedy for a sick tongue, treatment for male urinary complaints and when women ate beans on an empty stomach as a birth control method.  Common bean (Phaseolus vulgaris L.) is one of the most widely cultivated food legume species in the world (Baudoin et al., 2001) for local consumption and exportation purposes and is a worldwide food-secure and nutritious worldwide crop to people of all income categories   (Pachico, 1993)  especially to the poor as a source of dietary protein because animal protein such as meats and fish is often rare or completely absent from their diets (Beebe et al., 2013). Bean is attacked by certain pathogenic fungi causing wilt, root-rot and leaf spot diseases which seriously affected both plant stand and yield production. These organisms can occur individually throughout the growing season.
Bean plants influenced genuinely by wilt which is broad disease in the globe also is frequently viewed as concerning illustration of major issue of bean production, diminishing as well as decreasing both yield and quality (El-Mougy, 2001; El-Mougy et al., 2007). Yield losses caused as a result of bean wilt disease are more notable in developing countries due to higher abiotic stress were recorded. The main pathogen responsible for wilt incidence of bean was reported to be Fusarium oxysporum f. sp. phaseoli (Burnchara and Camacho, 2000; El-Mougy, 2001).
The control of bean wilt depends on chemical control, biological control, resistant cultivars and control by cultural practices. There is therefore a need to develop tools and procedures that are simple, fast and accurate for the quantification of pathogen populations, particularly, Fusarium species. In order to overcome such hazardous control strategies, scientists, researchers from all over the world paid more attention towards the development of alternative methods which are, by definition, safe in the environment, non-toxic to humans and animals and are rapidly biodegradable. One of such strategy is the use of biocontrol agents (BCAs) to control fungal plant diseases. Among the BCAs, species of the genus Trichoderma is most promising and effective biocontrol agent. Trichoderma as antagonist controlling wide range of microbes (Chet et al., 1977), and their mechanism of mycoparasitism is much more complex, involves nutrient competition, hyperparasitism, antibiosis, space and cell wall degrading enzymes.
A successful disease-control program could involve just a single practice, but the long term reduction of disease losses generally requires the application of several control measures. The best way to ensure success of a disease-management program is to use integrated disease-control measures (Dik et al., 2002). Generally, IPM is regarded as the use of environmentally safe practices to reduce the disease incidence and development or use of multiple control tactics integrated into a single pest control strategy (Zinkernagel et al., 2002). For example, different natural products, that is, biocontrol agents, plant extracts, essential oils, antioxidant, growth regulators and natural compounds were used as an IPM program which takes a somewhat different approach in plant disease control (Bindu and Kumar, 2009; Li et al., 2009; Sharma et al., 2012). A considerable concern in discovering plant-derived anti- microbial agents arised recently (Sagdic et al.,  2003)  for alternative application in the strategy of preventing bacterial and fungal growth (Lanciotti et al., 2004). Volatile compounds and essential oils used as alternatives for anti-bacterial and anti-fungal treatments (Jenny, 2000; Michael, 2000). Furthermore, Juglal et al. (2002) studied the effectiveness of nine essential oils to control the growth of mycotoxins producing moulds and observed that clove, cinnamon and oregano were able to prevent the growth of Aspergillus parasiticus and Fusarium moniliforme. Benkeblia (2004) observed an inhibitory effect of onion essential oil at different concentrations on the growth of F. oxysporum, Aspergillus niger and Penicillium cyclopinum.
In Egypt, the farmers replant the missed holes on the same field. This practice could leads to a high population of the pathogens, causing serious losses which could reach up to 12% (Anonymous, 2012). The Egyptian farmers followed unwise and intensive use of fungicides for disease management. This strategy proved to be an unsatisfactory solution for controlling wilt disease in Egypt. Research over the last few decades for alternative substances with fungicidal properties has revealed that a potentially useful component of integrated disease management (IDM) programmes against foliar fungal pathogens can be spray applications (Fallik et al., 1997; Mann et al., 2004; Mitchell and Walters, 2004). Therefore, recently, great attention has been diverted to the use of fungicide alternatives for suppressing plant diseases (El-Mougy, 1995, 2001, 2009; Siddiqui et al., 2001; El-Gamal et al., 2003; El-Mougy et al., 2004, 2007; Abd-Alla et al., 2009; Abdel-Kader, 1997; Abdel-Kader et al., 2011, 2012; Abdel-Kader and El-Mougy, 2014) to decrease human and animal health risk concerns. Increased use of foliar fungicides has prompted us to explore potential impacts of this change in production practices and determine if foliar non-fungicide use can be justified for use of other than disease management.
In the present study, an investigation control method to disease development and to reduce the yield losses caused by wilt using non-fungicidal methods of treatment was performed. In this concern, we aimed to determine the efficacy of some fungicide alternatives growth regulators e.g. indole acetic acid and gibberellic acid individually or combined with the bioagent T. harzianum, lemon grass, moringa leaf and thyme (essential oils) or vitamins C and E (antioxidants) as foliar spray against bean wilt incidence under field conditions.

Evaluation of some fungicide alternatives against wilt incidence was carried out under field conditions for two successive growing seasons.
Evaluation of growth regulators
Generally, we observed that the results of the disease control under the effect of Indole Acetic Acid and Gibberellic acid when each was used independently or in combination with the biocontrol agent, T. harzianum depended on their used concentration (Table 1). A  dose- response experiment was conducted to determine the level of wilt incidence and reduction in the percentage of the disease to obtain a glimpse of a potential control mechanism. 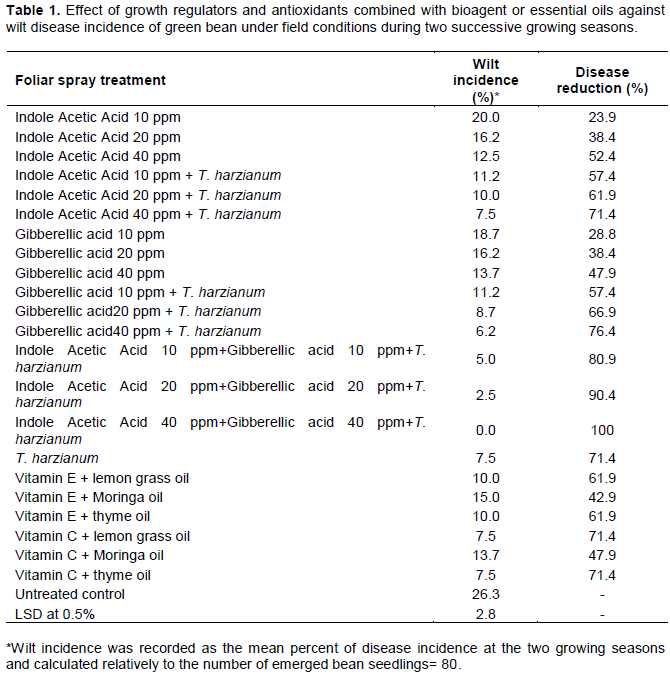 Disease management strategy research should be largely focused on identifying crop and soil management approaches that have an immediate impact on managing root diseases. It is vital to raise host resistance, to refine and promote methods for the sustainable control of bean wilt simultaneously with the study of pathogenic variation. The information generated will be used as a basis for the development of improved crop management methodologies for sustainable production of beans by resource-poor, smallholder farmers. In this context, the present work emphasizes the importance of Trichoderma as a biological control agent and its application towards management of plant diseases. The present work also revealed a significant reduction in wilt incidence of green bean under field trials using integrated treatment application of growth regulators, essential oils or antioxidants with the bioagent T. harzia­num. It may be concluded that such treatments are considered appli­cable, safe and cost-effective method for controlling such root diseases. So, induced resistance needs to find its way into plant diseases protection strategy and crop management programmes.