Litter decomposing macrofungi (LDM) and ectomycorrhiza (ECM) play vital roles in maintenance of forest ecosystem. Since these soil-litter dwelling fungi produce lignolytic enzymes, they have been proved useful in soil bioremediation. However, literature of these groups is limited and therefore it is important to record and identify them. This study reports the diversity of litter growing macrofungi in three sal (Shorea robusta C.F. Gaertn.) dominated small forests, that is, Bethuadahari Wildlife Sanctuary (BWS), Ranaghat Forest (RF) and Zafarnagar Forest (ZF) of Nadia, West Bengal India. During the study period (2013 and 2014) 10,253 carpophores, belonging to 37 macrofungal species were sampled and 17 edible, 14 inedible and 4 poisonous species were identified based on previous records. Podoscypha elegans (G. Mey.) Pat. was recorded in India for the first time. Only 7 ECM (~18.91%) and 30 saprophytic (~81.08%) species were recorded. The differences of diversity pattern in the three forests varied significantly. Shannon and Brillouin indices were highest in BWS suggesting the most diverse fungal community in terms of α diversity whereas; β and Taxonomic diversity studies suggested that RF was the most heterogeneous forest among the sampled forests.

India is a mega-diversity nation having a forest cover of 697,898 km2 occupying 21.23% of the land area (State of Forest Report, 2011-2012) and is endowed with rich fungal flora (Manoharachary et al., 2005). Fungi are one of the most under-studied and under-protected groups (Minter, 2011) and thus, need special attention.
Saprotrophic decomposer fungi, mutualistic mycorrhizal fungi and parasitic fungi are the main functional groups which inhabit the forest litter (Simard and Austin, 2010). Some fungi of the first group and ectomycorrhiza (ECM) produce macroscopic carpophores and are referred to as macrofungi.
Litter decomposing macrofungi (LDM) colonize the forest litter and play a major role in litter decomposition (Osono, 2015) while ECM, is considered essential for the growth and health of forest tree species (Courty et al., 2010). Unfortunately, record of these groups is limited. Both ECM and LDM play vital roles in forest nutrition cycle (Cairney and Meharg, 2002). LDMs assume signi-ficance because a number of attempts have been made by different workers to exploit their lignolytic enzymes arsenal for bioremediation (Anastasi et al., 2013). The bioremediation property of both LDMs (Baldrian and Šnajdr, 2006; Liers et al., 2013) and ECM (Casieri et al., 2010) has been documented. Decontamination of pollutants from soil, water etc by the use of microorga-nisms is denoted as bioremediation (Rhodes,  2012)  and this process is thought to be highly advantageous in recent years over other conventional processes (Ali, 2010). The forest area in West Bengal is around 11,879 km2 occupying 13.38% land area and Nadia accounts for merely 0.30% (12 km2) of this (State Forest Report, West Bengal 2011-12).  Forests of Nadia are tropical moist deciduous broad leafed ones dominated by Shorea robusta C.F. Gaertn. (Dipterocarpaceae). The forest cover of the district is very low and is patchy in nature. Such a condition prevails in all other districts of tropical moist climate of West Bengal (Maldah, Murshidabad, Barddhaman, Hugli, Haora, Eastern parts of Bankura, West and East Medinipur and the Northern parts of North and South 24-Parganas).
With this in view, the current study intended to record the occurrence of this important but less studied group of macrofungi in three forests of Nadia District of West Bengal, India. Detailed survey were undertaken to also study the a, b and taxonomic diversity of  the LDM species. This type of diversity study with LDM is the first of its kind in this area.

Study areas
In the three forests the dominant tree is S. robusta (Dipterocarpaceae) along with  other  species  like Swietenia mahagoni (Meliaceae), Tectona grandis (Lamiaceae), Terminalia arjuna (Combretaceae), Mesua ferrea, Diospyros blancoi (Ebenaceae), and Saraca asoca (Fabaceae). The tree density differed in the three forests, BWS (~67 ha) being the densest among them. BWS is a protected forest while RF (~34 ha) and ZF (~29 ha) are not protected. The distance between BWS and ZF is ~52 km while between BWS and RF is ~56.5 km.
Sampling, identification and diversity analysis
Forest areas were surveyed at intervals of 7 days from January 2013 till December 2014 and identified based on morpho-anatomical characterization and literature (Butler and Bisby, 1960; Arora, 1986) studies. P. elegans was further identified based on sequencing of 18S rDNA and NCBI blast. The sequence was published in NCBI genebank. Sampling was carried out in fixed random plots of 25 × 25 m2 marked as B1 to B10 in BWS (that is, 10 plots), R1 to R7 in RF and Z1 to Z7 in ZF (that is, 7 plots each in RF and ZF). The total number of different species and individuals were recorded. Frequency of occurrence (F) was calculated after Tapwal et al., (2013) as follows:

Collection and identification
Altogether 5754, 2556 and 1943 numbers of carpophores were surveyed from BWS, RF and ZF respectively and 37 species were recognized (Table 1; Supplementary File 1) and classified into 18 genera of 12 basidiomycetous families. Two species of Agaricus and one species each of Marasmius, Coprinus, Agrocybe and Podoscypha could not be identified due to lack of literature. P. elegans was recorded for the first time in India. The identity of the species was further confirmed by 18S rDNA sequencing and blast analysis and the sequence was published in NCBI GenBank (Accession number: KP966113.1). The species was found growing on both wood litter and on soil-litter in BWS and RF during June to August. 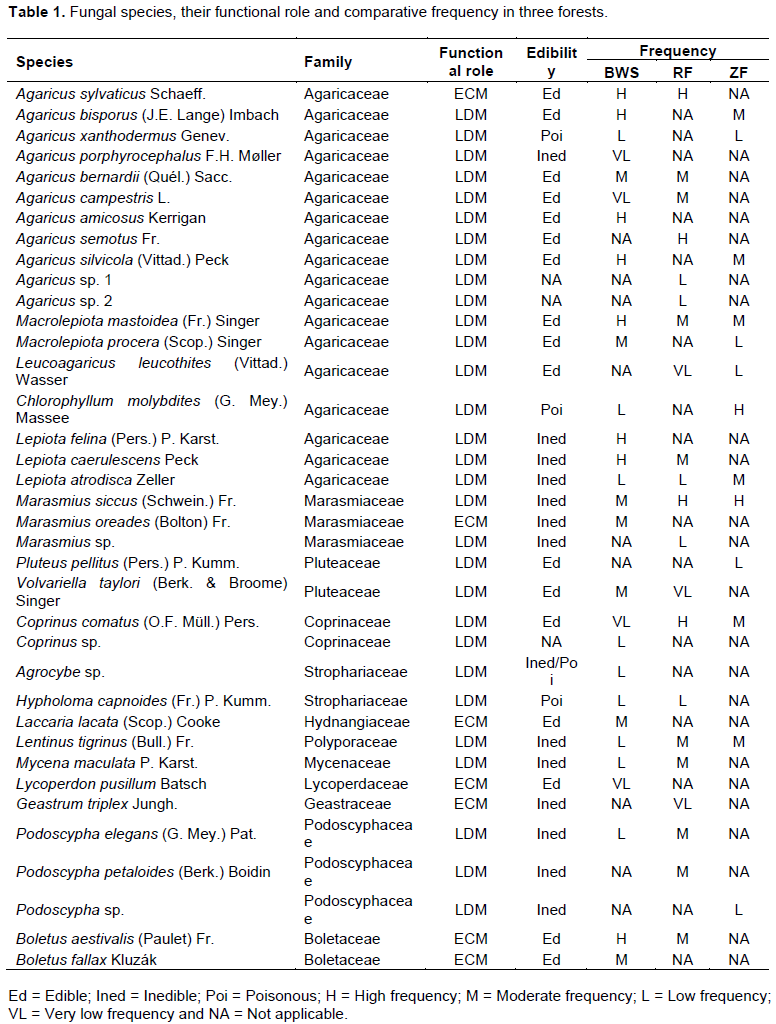 28 fungal species belonging to 12 fungal families were recorded in BWS (Table 1), among which Agaricaceae represented the largest family. In RF, 21 species were recorded belonging to13 genera and 10 families while in ZF a total of 13 species were recorded among 10 genera and 6 families.
17 edible, 14 inedible and 4 poisonous (Table 1) species were recognized and only 7 species, previously reported as ECM, were recorded of which 6 namely Agaricus sylvaticus, Marasmius oreades, Laccaria lacata, Lycoperdon pusillum, Boletus aestivalis and B. fallax were present in BWS while 3, viz. A. sylvaticus, Geastrum triplex and Boletus aestivalis were recorded from RF and none was recorded from ZF.
Agaricaceae was the most dominant fungal family in terms of number of species (Figure 1). Five genera and 18 spp. of Agaricaceae were found in the three forests of which the maximum (14 spp.) were documented in BWS, followed by RF (10 spp.) and ZF (8 spp.). The genus Agaricus showed maximum of 11species (Table 1), of which 8, 6 and 3 were present in BWS, RF and ZF respectively.  Among  the  other  families,  Marasmiaceae (Marasmius siccus, Marasmius oreades and Marasmius sp.) and Podoscyphaceae (Phaps elegans, Phaps petaloides and Podoscypha sp.) were the second most abundant having three species each. 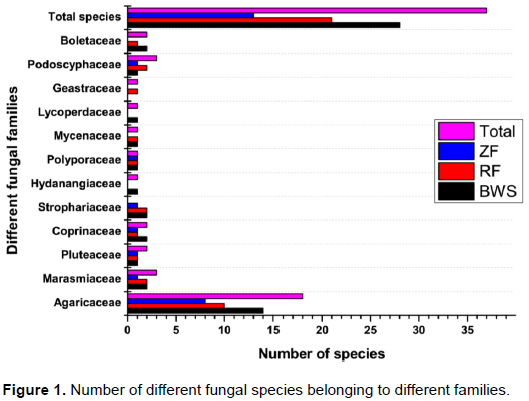 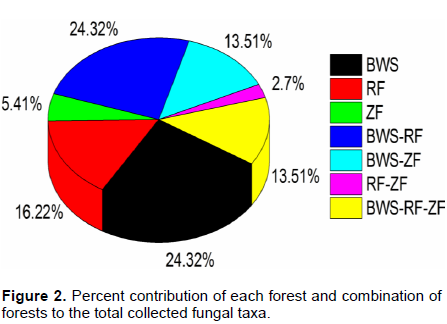 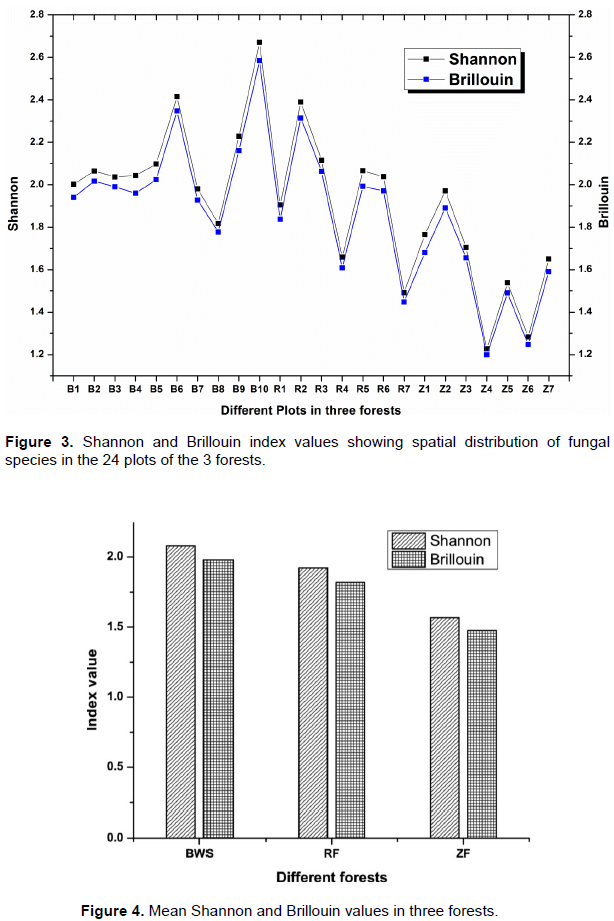 Rarefaction
The   individual   based    rarefaction    curve    (Figure  5; Supplementary File 3) showed highest species richness in BWS. Since, the curve line of ZF lies significantly lower than RF, species richness was lowest in ZF. At 101 sample size, 22.32, 18.84 and 12.68 specimens may be recorded in BWS, RF and ZF respectively. 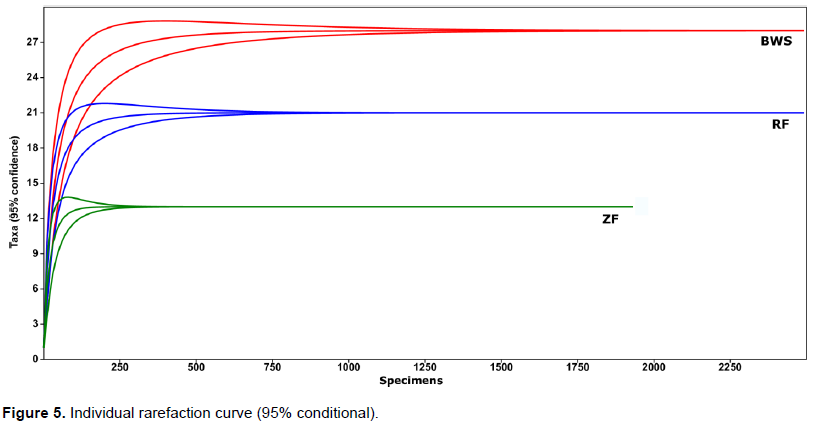 Myco-vegetation in the litter layer of forests of Nadia
The transient nature of the carpophores makes fungal sampling challenging and to minimize the sampling error, pooled data was analyzed for overall presentation of fungal diversity in this study. Collections were done between May to October (2013-14) and no carpophores were found during December to April indicating that the pre-Monsoon, Monsoon and the cooler post-Monsoon periods (prior to winter) were favourable for fungal study in this region. The carpophores sprouted for varying periods from 1 to 5 months (Supplementary File 1).
There was also month-wise variation in the availability of LDMs (Figure 6) and 17, 23, 27, 25, 10 and 5 species were recorded during the months of May to October respectively. Maximum species were available during July (mid- Monsoon). The average rainfall recorded in the district of Nadia is 188.20, 955.00 and 118.40 mm in the pre-Monsoon, Monsoon and post-Monsoon periods respectively (Annual Flood Report, 2014). 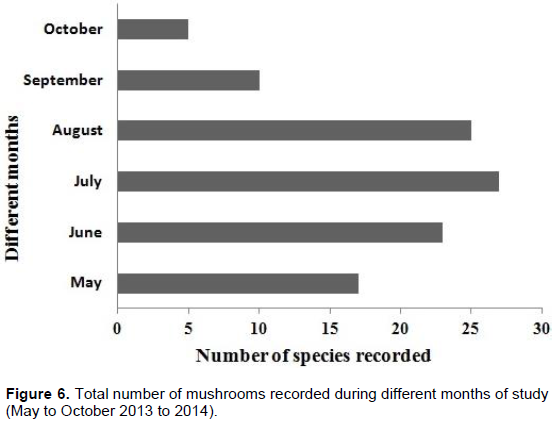 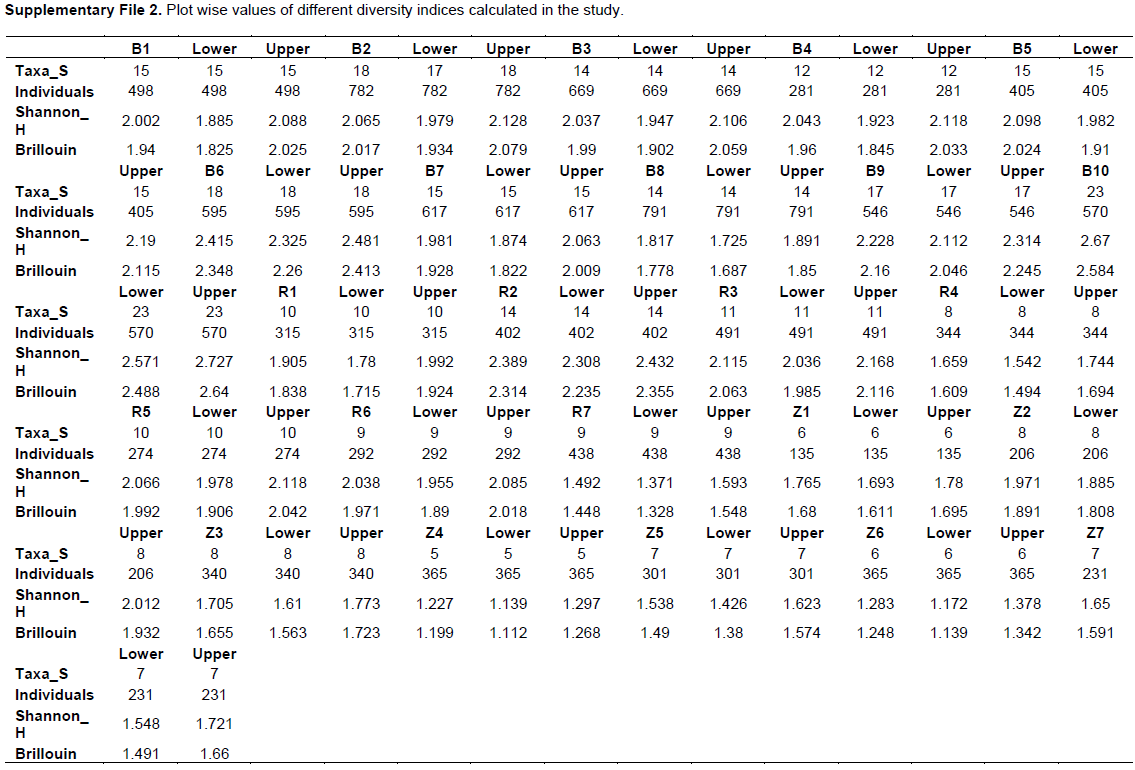 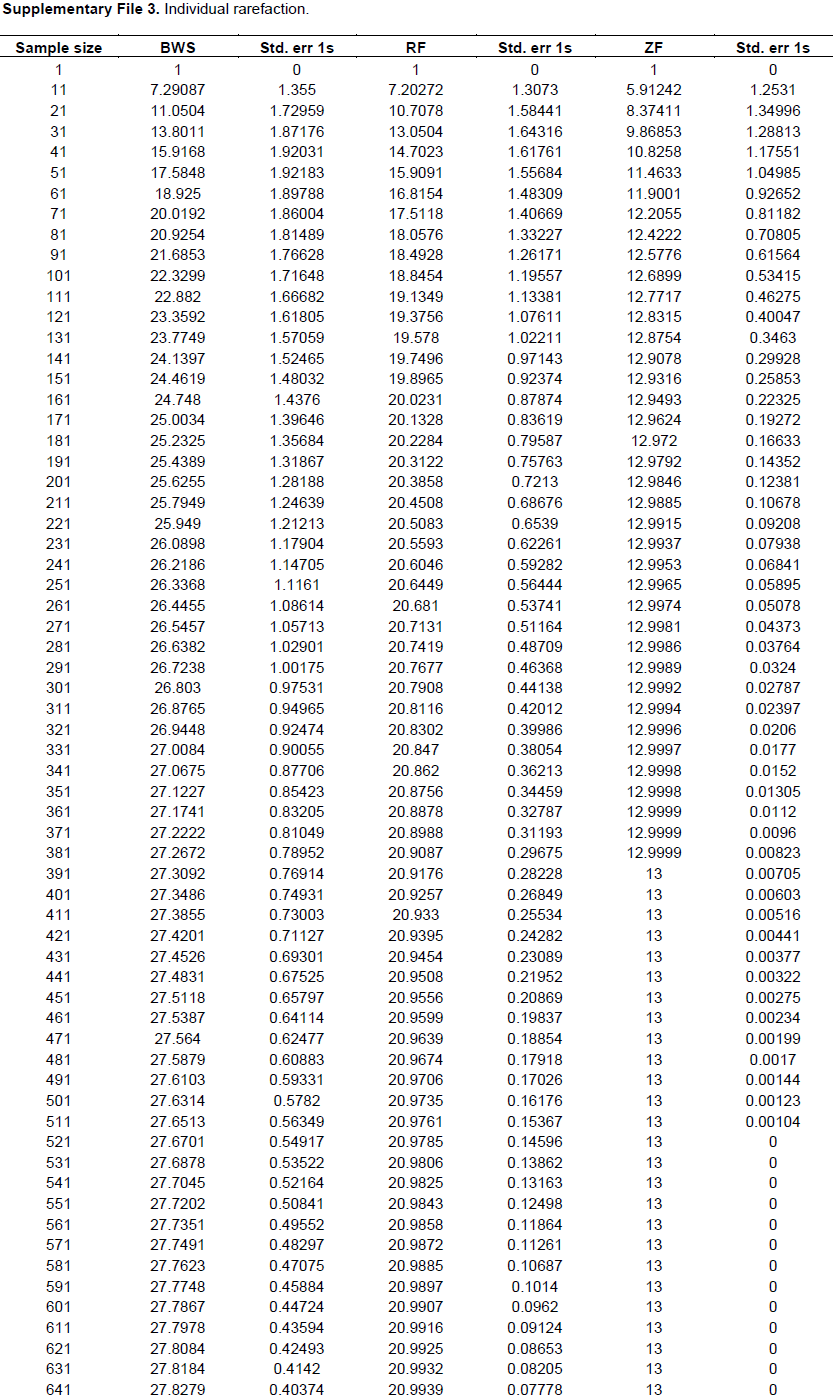 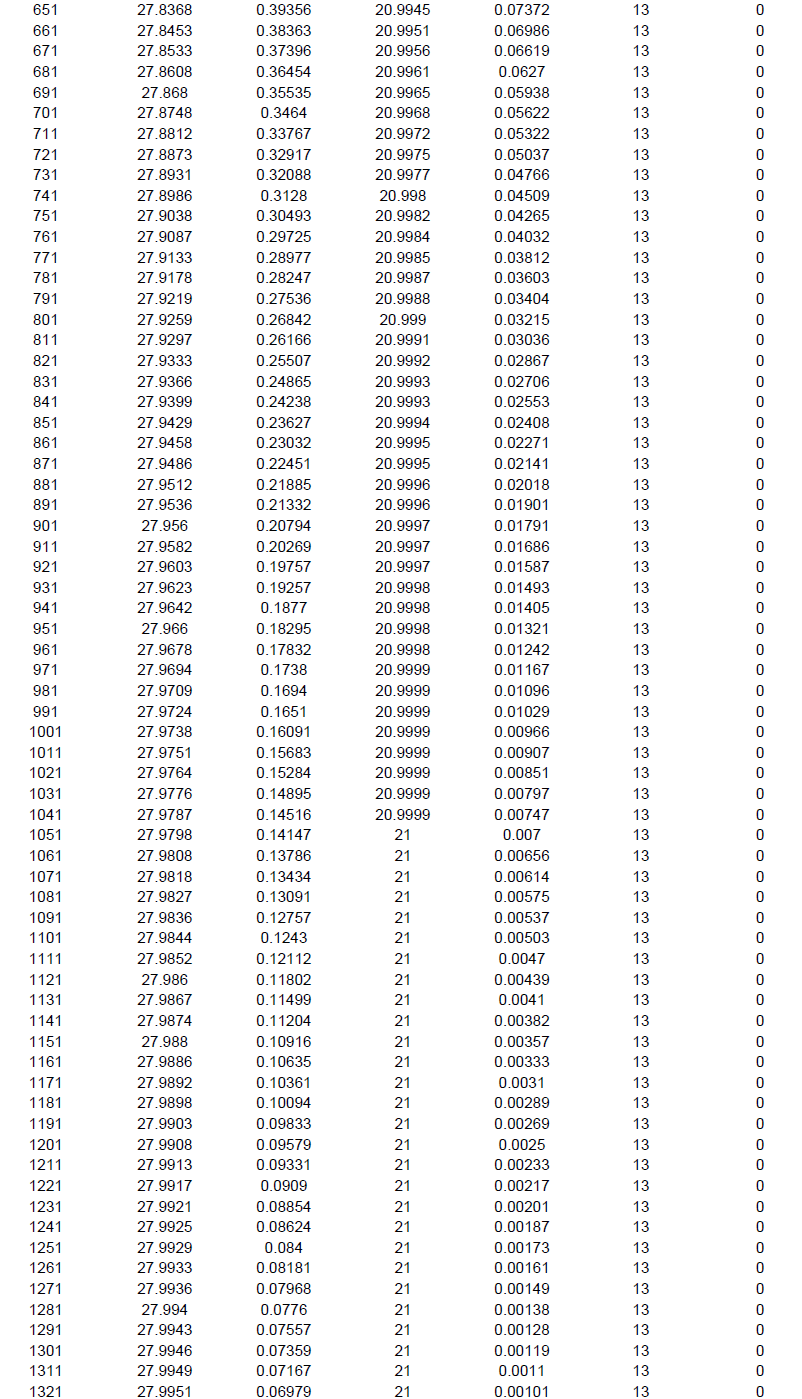 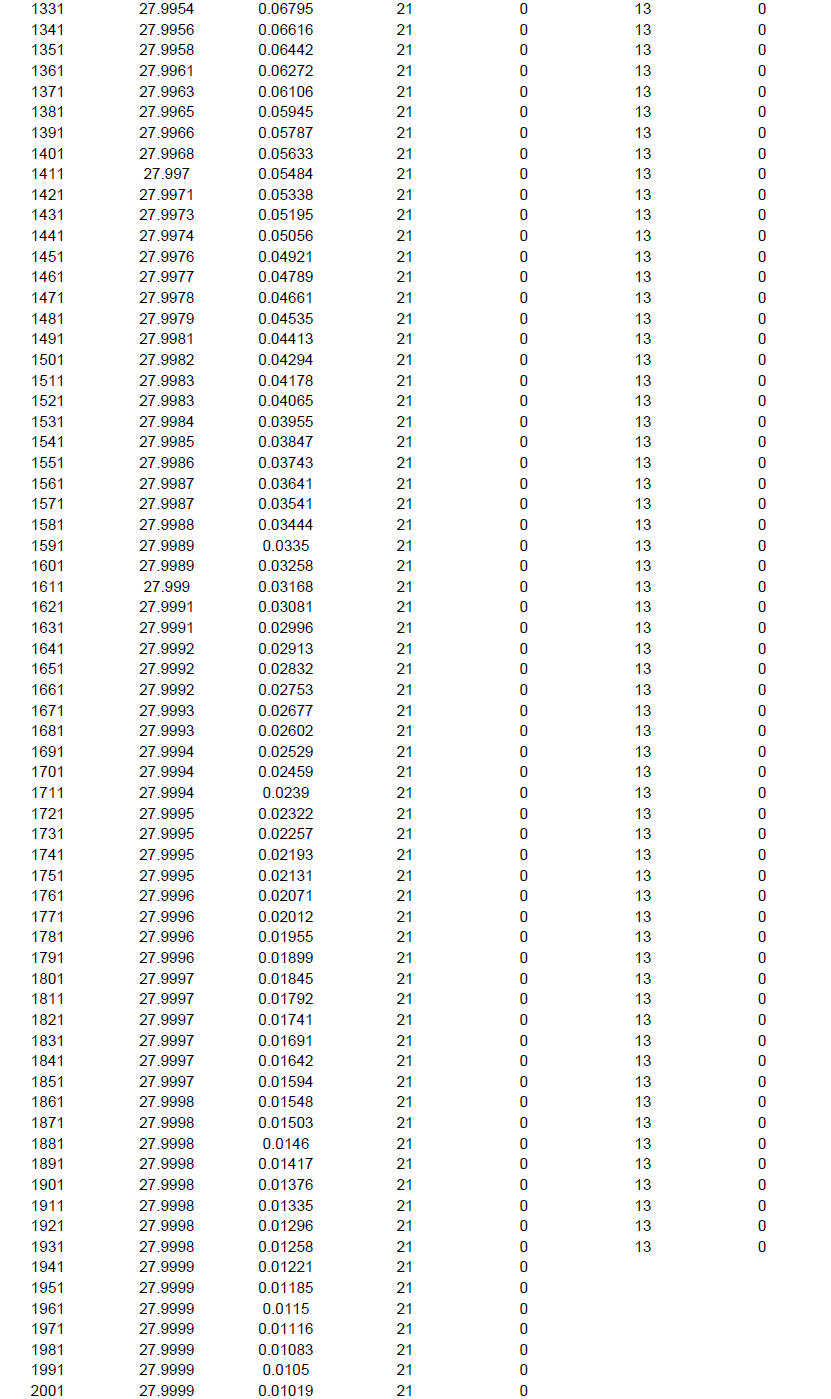 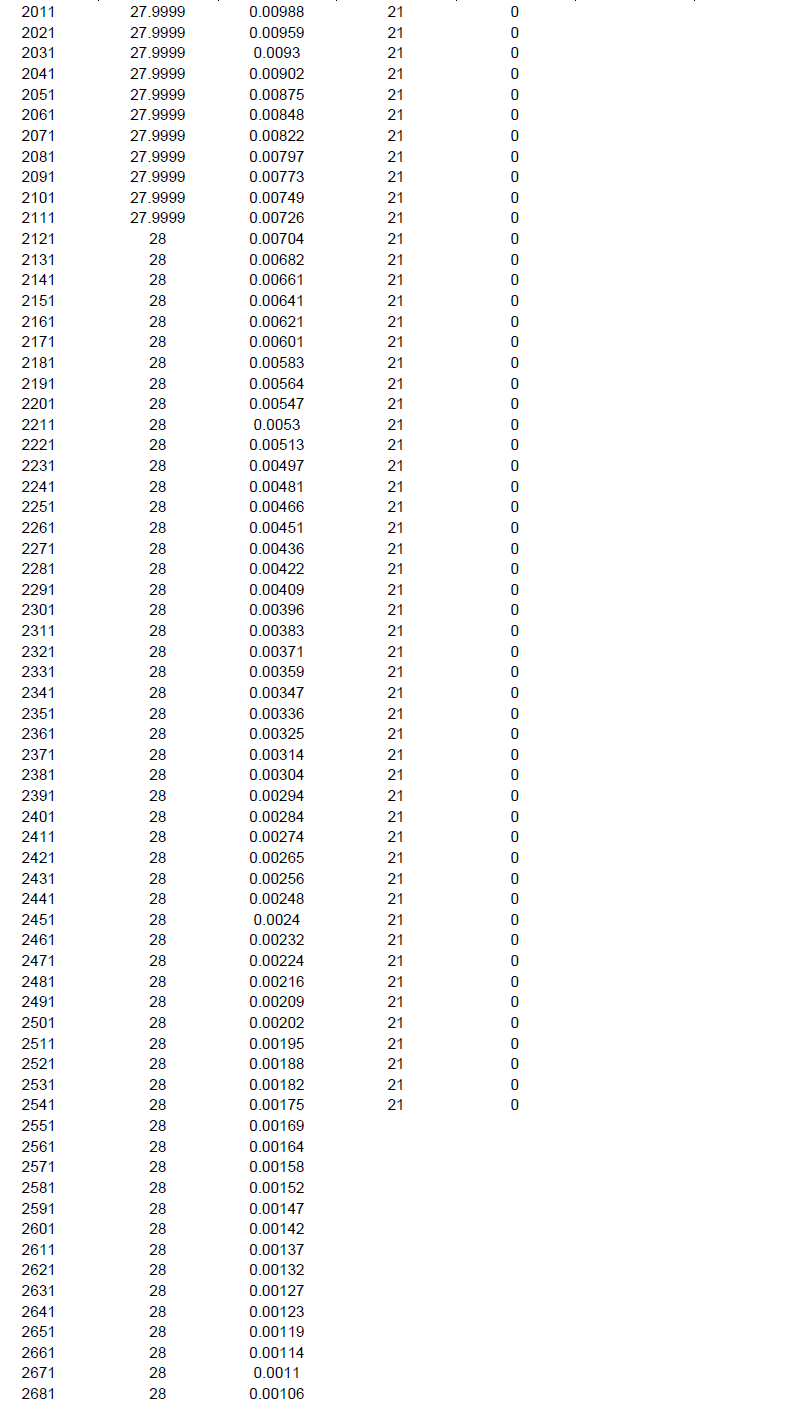 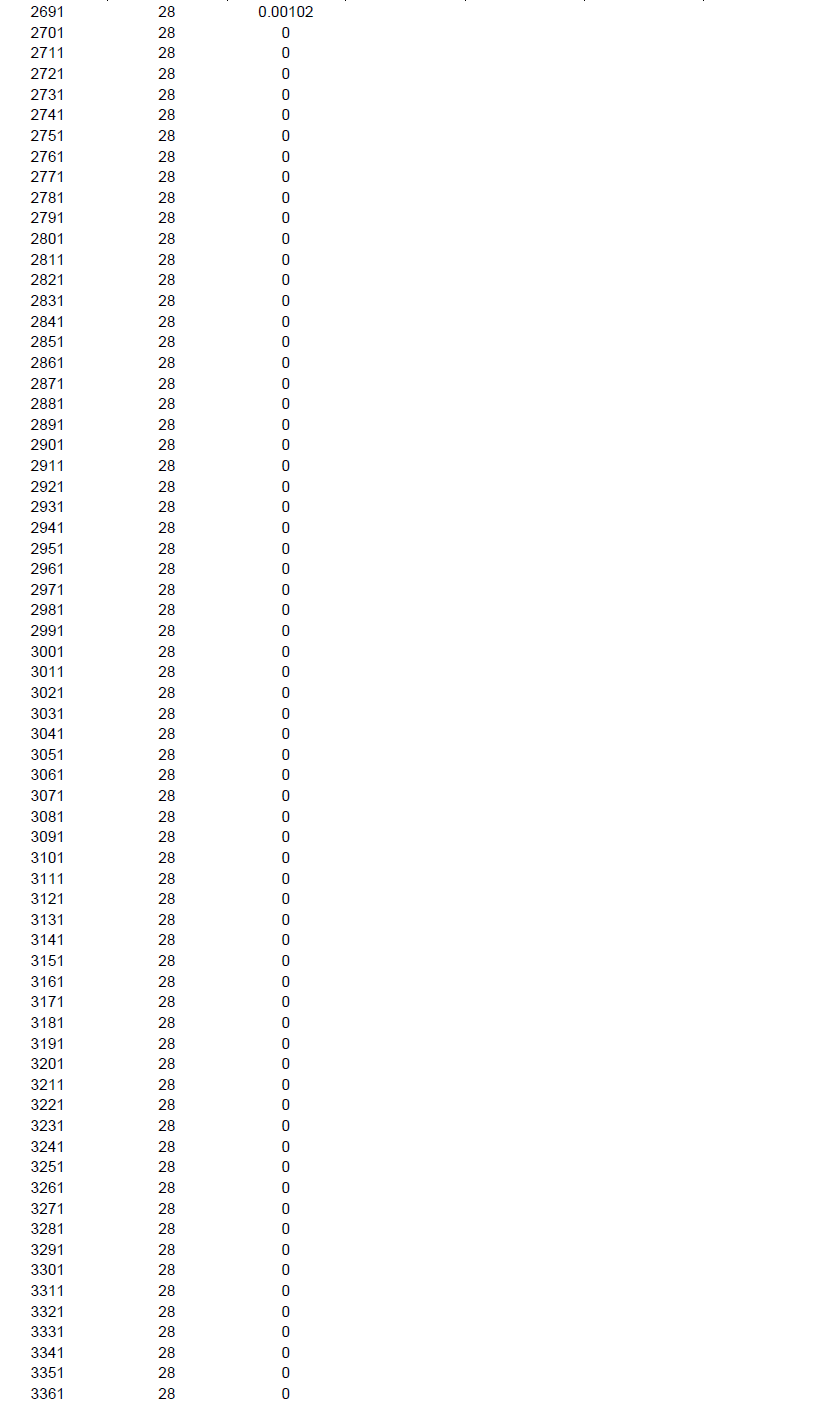 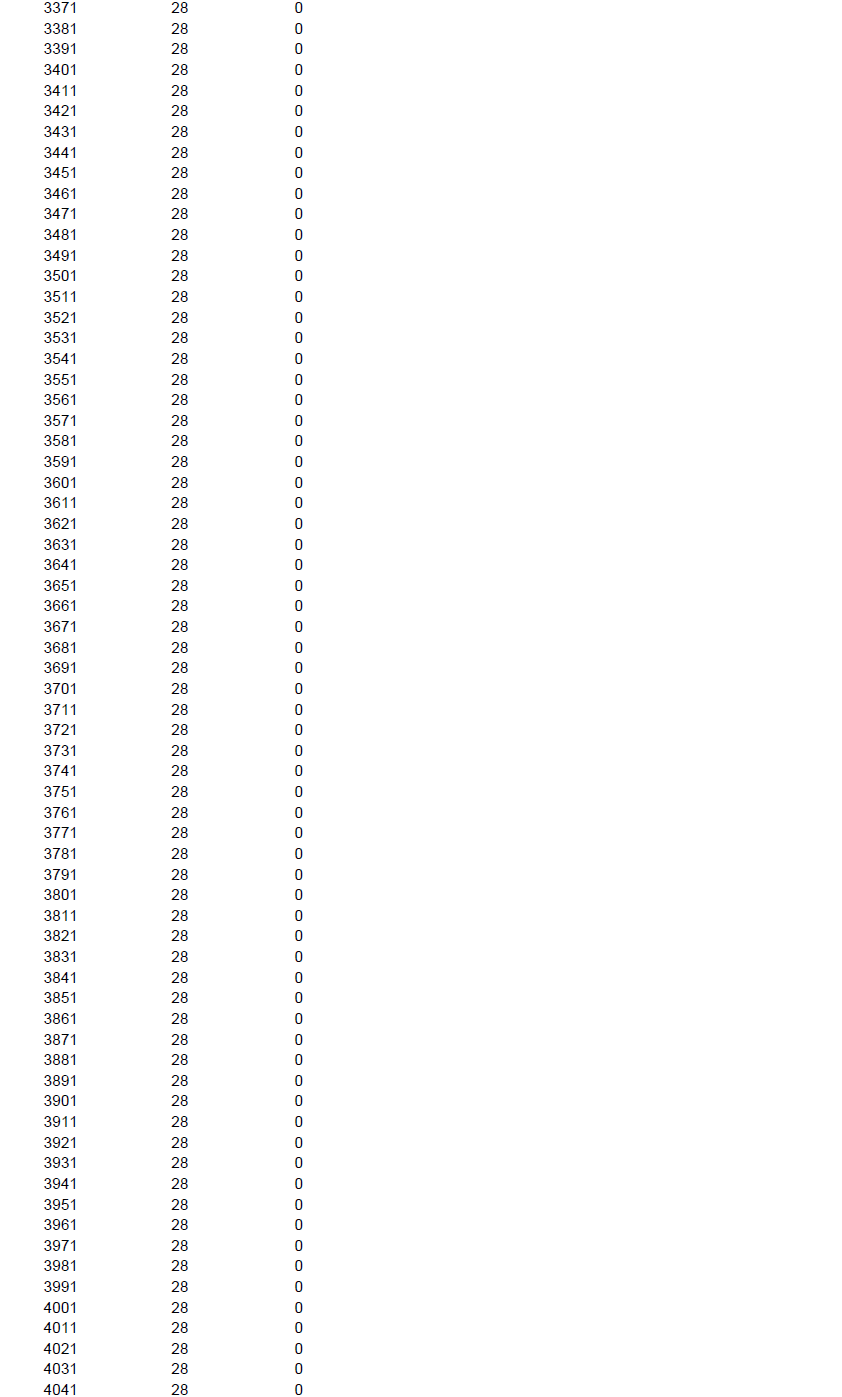 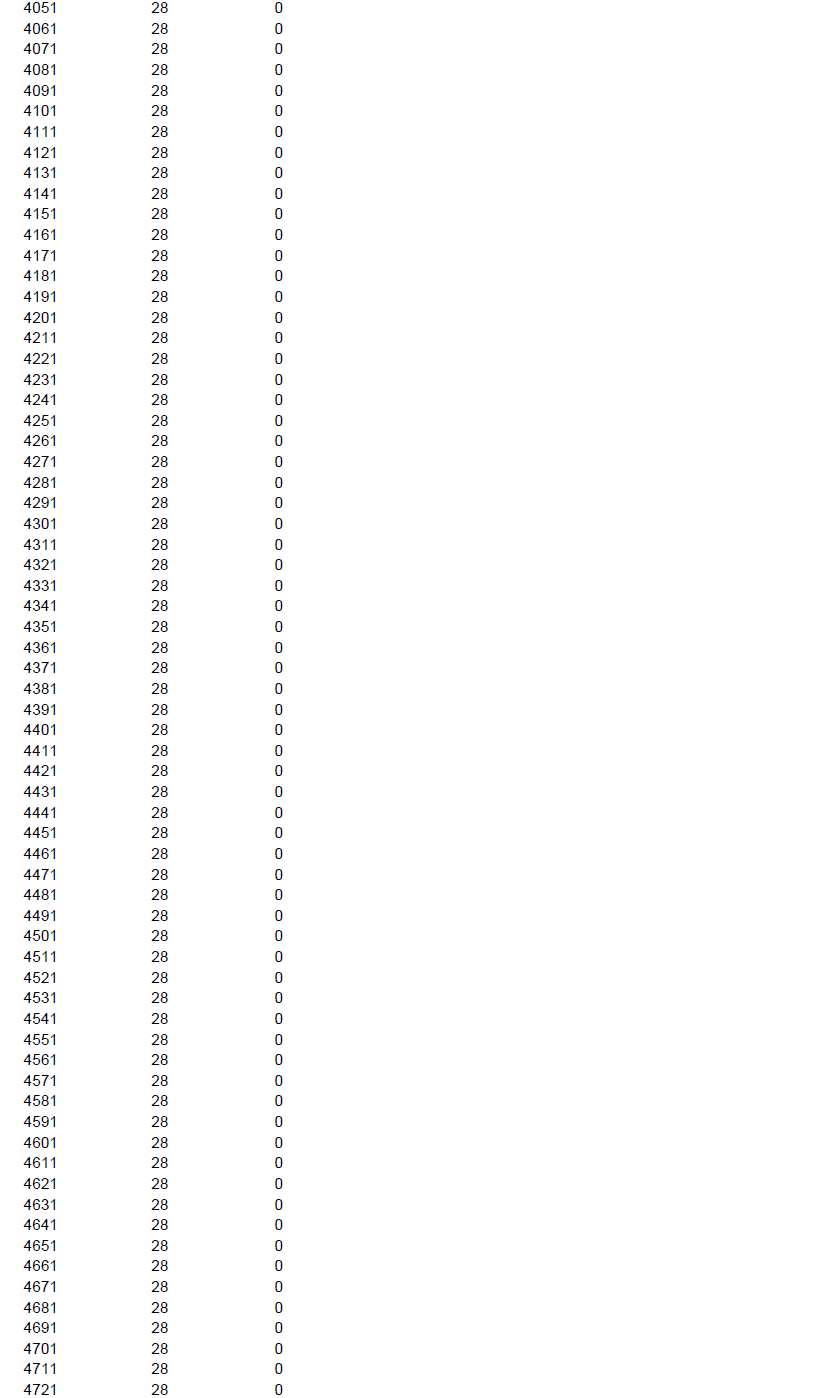 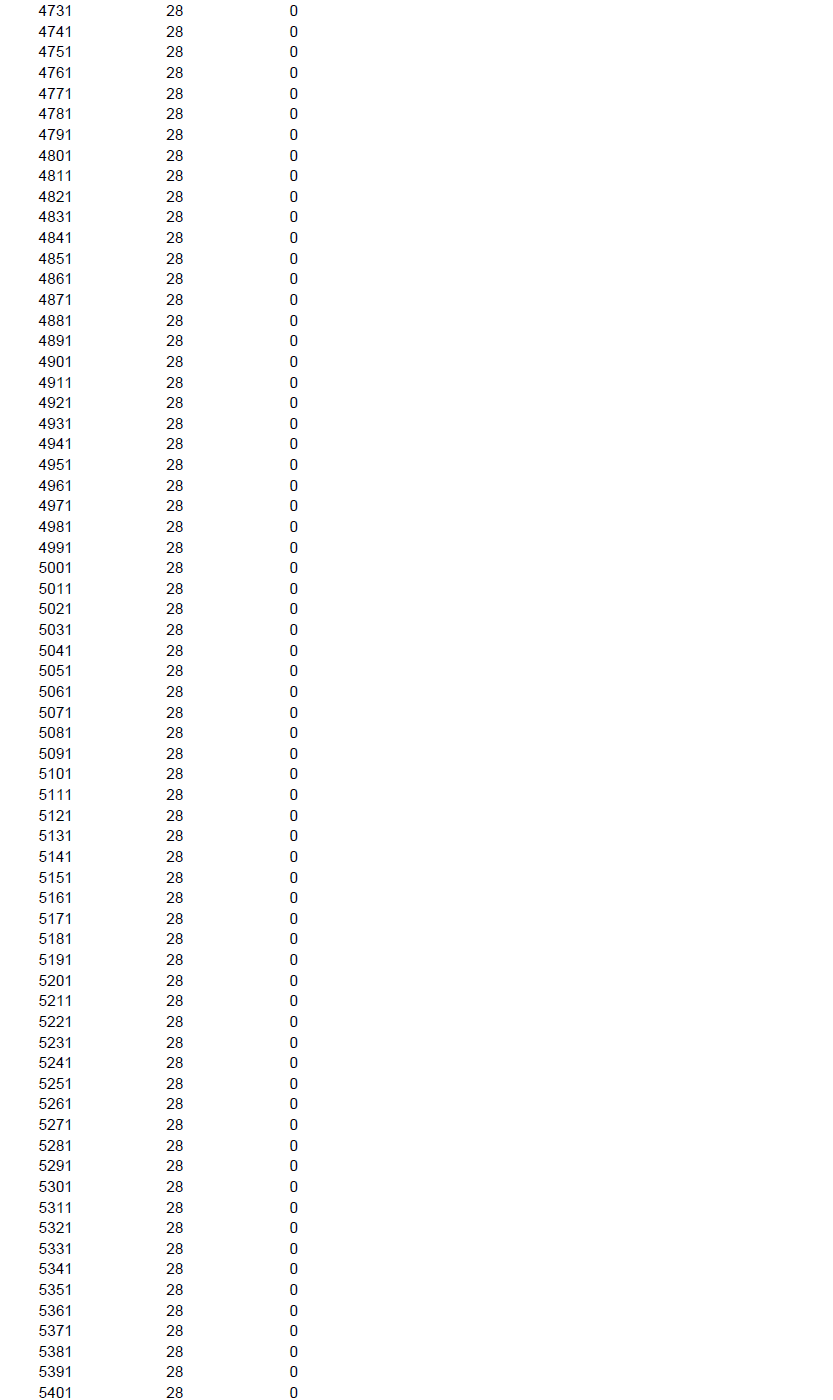 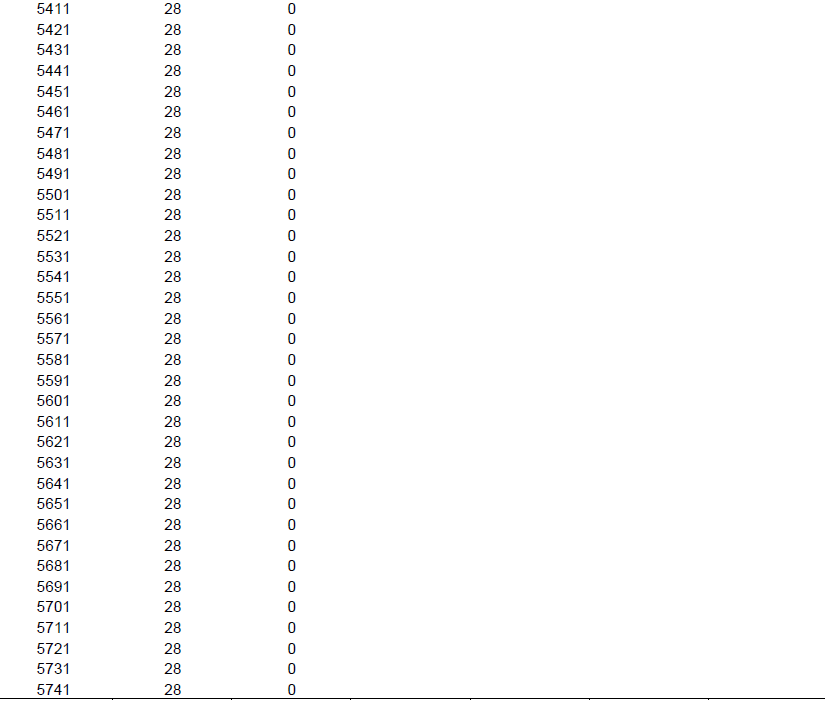