Twenty six isolates of Colletotrichum gloeosporioides from anthracnose infected mango fruits were isolated from different places of Tamil Nadu, India and these isolates were identified as C. gloeosporioides by Internal transcribed spacer (ITS) and species specific (CgInt) primers. The sensitivity of C. gloeosporioides isolates to benomyl fungicide were evaluated at five different concentrations viz., 0.5, 1, 2, 5, 10 mg/l through poisoned food technique and were expressed very less to highly sensitiveness to the fungicide. All the twenty six isolates were able to grow at the lowest concentration of 0.5 mg/l benomyl amended medium and the average mycelial growth was 70.70 mm at even days after inoculation. At the highest concentration of 10 mg/l benomyl, only two isolates viz., MCG 7 and 16 were able to grow with the mycelial diameter of 12.00 and 18.00 mm, respectively and 100% inhibition was found in the remaining isolates. In addition, benzimidazole sensitive and resistance β - tubulin gene sequences of TUB 1 and TUB2 were amplified from the benomyl sensitive isolates of C. gloeosporioides. The results indicated the differential resistance or sensitivity to benomyl fungicide against C. gloeosporioides and thereby allowed to identify the variability and diversity of the isolates on regional basis.

Many diseases are affecting mango, of which anthracnose caused by Colletotrichum gloeosporioides (Penz.) Sacc is the most devastating disease and major constraint in production and export of mango. Several fungicides have been used to manage the mango anthracnose as pre- and post-harvest sprays, including benzimidazoles, triazoles, strobilurins, acid amides, dithiocarbamates and heterocyclic compounds (Fei and Wang, 2004). Hot benomyl dips have been reported for effective control of anthracnose in harvested mango fruit (Kim et al., 2007). Benomyl has been used in agriculture for  approximately  30  years   and   numerous   cases   of
resistance have been reported, including Colletotrichum spp. on various crops (Whiteside, 1980; Picinini, 1994; Hewitt, 1998). Benzimidazoles are specific inhibitors of microtubule assembly that act by binding to their heterodimeric subunit (Davidse, 1986). Several studies have demonstrated that benzimidazole resistance is associated with point mutations in codon 198 or 200 of the β-tubulin gene in various fungi, including Venturia inaequalis, Botrytis cinerea, Monilinia fructicola, C. gloeosporioides and Mycosphaerella fijiensis (Ma et al., 2003; Peres et al., 2004; Chung et al., 2006; Kim et al., 2007). Other point mutations in the β-tubulin gene (Jung et al., 1992; Cooley and Caten, 1993) as well as in the putative leucine zipper protein CaBEN1 (Nakaune and Nakano, 2007) have also been associated with resistance to benzimidazoles. Maymon et al. (2006) reported that sequence analyses of the β-tubulin genes, TUB1 and TUB2, of five sensitive and five resistant representative isolates of C. gloeosporioides from Limonium spp. revealed that the benomyl resistant isolates had an alanine substitute instead of a glutamic acid at position 198 in TUB2. Benzimidazole resistant isolates of C. gloeosporioides from different crops have been identified, but the molecular characteristics of these resistant isolates are still not well defined (Pei, 1981; Tsai et al., 2006). The molecular identification and monitoring of benzimidazole resistant fungi has been recognized as a useful tool in the study of fungicide resistance (Ma et al., 2003; Canas-Gutierrez et al., 2006). Housekeeping genes including the nuclear β-tubulin genes, which show higher DNA sequence variability, are more extensively used to develop diagnostics for fungi, (Fraaije et al., 2001; Mostert et al., 2006; Aroca et al., 2008). Partial β-tubulin sequences from C. gloeosporioides isolates of mango were amplified (Albertini et al., 1999; Yarden and Katan, 1993) as a molecular tool for the identification of benzimidazole-resistant isolates of C. gloeosporioides. Sanders et al. (2000) evaluated 158 isolates of C. gloeosporioides and reported, 17.7% were resistant to benomyl with 8.5% highly resistant due to mutations in the β - tubulin gene using this information, C. gloeosporioides isolates from mango fruits collected in India were evaluated for benomyl sensitivity and mutations in the β - tubulin gene in the present study.

C. gloeosporioides from mango
Twenty six isolates of C. gloeosporioides collected from different districts of Tamil Nadu, India were evaluated in the study (Table 1). Their pathogenicity, variability in virulence was previously reported by Archana et al. (2014).
Sensitivity of C. gloeosporioides to benzimidazole fungicide – benomyl
Each isolate was cultured on Potato Dextrose Agar  (PDA)  medium in petri plates at 28±2°C for three days, after that mycelial disc (3 mm diameter) were cut from colony margins and a single disc was transferred to the centre of Petri plate containing PDA medium amended with 0.5, 1, 2, 5 and 10 mg/ml of the active ingredient of benomyl fungicide, which was added to PDA medium after autoclaving. Test cultures were incubated in dark at 28±2°C and then mycelial growth was measured 11 days after inoculation (Chung et al., 2010) and control plate was maintained by growing the isolates in the Petri plate containing PDA medium alone. 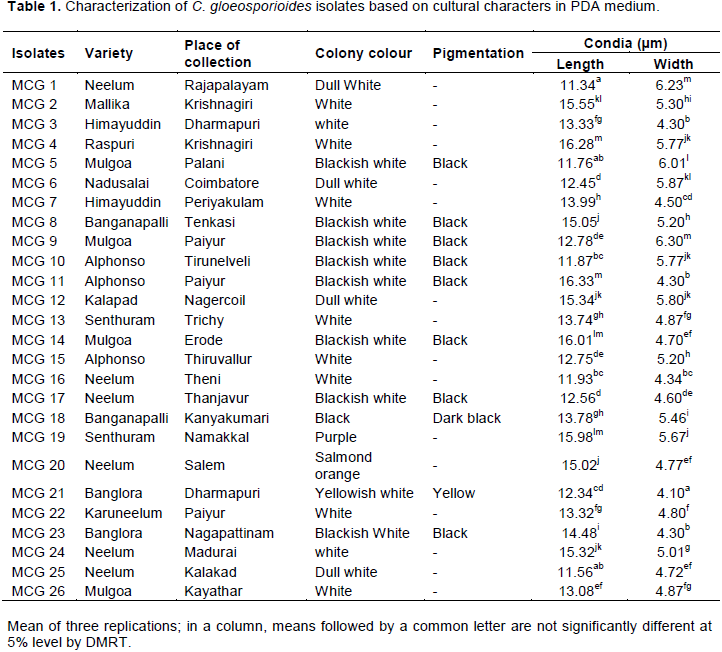 PCR based detection and diagnosis of C. gloeosporioides isolates using internal transcribed spacer (ITS) and CgInt primers
Genomic DNA for C. gloeosporioides isolates were extracted from the mycelial mat by Cetyl trimethyl ammonium bromide (CTAB) method as described by Knapp and Chandlee (1996). The ITS1-5.8S-ITS2 region of ribosomal DNA was amplified with ITS1 (5′-TCCGTAGGTGAACCTGCGG-3′) and ITS4 (5’-TCCTCCGCTTATTGATATGC-3’) oligonucleotide primers. The amplification was performed in 50 μl reaction containing 1.5 units of Taq DNA polymerase (Qiagen, Germany), 1x polymerase chain reaction (PCR) buffer, 200 μM each dNTP, 0.2 μM each primer and 100 ng of template DNA followed by the thermal cycler reaction of 30 cycles (0.5 min at 94°C, 0.5 min at 56°C and 2 min at 72°C) with the final step at 72°C for 7 min (Tosa et al., 2004).
PCR amplification using the oligonucleotide primers ITS 4 (TCCTCCGCTTATTGATATGC) and CgInt (GGCCTCCCGCCTCCGGGCGG) were used for species identification. PCR reaction were as described above with amplification as follows: denaturation at 95°C for 5 min, 30 cycles of 30 s. at 95°C, 30 s at 48°C and 90 s at 72°C and a final extension of 10 min at 72°C (Maymon et al., 2006) in an Eppendorf gradient thermal cycler.
Analysis of benomyl resistance of C. gloeosporioides isolates using partial sequence of β-tubulin gene
PCR ampliï¬cation of β-tubulin gene (TUB2 and TUB2B) fragments were carried out using generic primer GENC (5′-GAGGAATTCCCAGACCGTATGATG- 3′) and TUB2 (5′-GACATCCTTCATAGCG-3′) to identify the benomyl resistant isolates (Koenraadt et al., 1992) and primer GENC and TUB2B (5′-GAC(A/G)TCCTTCAT(A/G)GCGA-3′)  to identify benomyl sensitive isolates (Panaccione and Hanau, 1990). TUB1β-tubulin gene was amplified using the primer GENC (5′GAGGAATTCCCAGACCGTATGATG-3′) and TUB 1C (5′-TCAATCTGCTTGGTCGACACCTT-3′) to identify the resistant isolates.
Reactions prepared as above and PCR reactions were performed with 60 s of denaturation at 94°C; followed by 35 cycles consisting of 30 sec at 94°C, 30 sec at 50°C and 60 sec at 72°C; and a final extension period of 10 min at 72°C.
Agarose gel electrophoresis
Amplification products for the above 5 evaluations were separated in 1.2% (w/v) agarose gel in1x TAE buffer (0.4 M Tris, 0.2 M acetic acid, 10mM EDTA; pH 8.4) containing 0.5 µg/ml ethidium bromide. Electrophoresis was carried out at 85 V and the gel was documented using an Alpha Imager (Alpha Innotech Corporation, San Leandro, CA, USA). The sizes of the PCR products were determined by comparing with standard 100 bp or 1 kb molecular marker (Bangalore Genei Pvt. Ltd., Bangalore, India).
Statistical analysis
The data were statistically analyzed using the IRRISTAT version 92 developed by the International Rice Research Institute Biometrics unit, Philippines (Gomez and Gomez, 1984). Data were subjected to analysis of variance (ANOVA) at two significant levels (P< 0.05 and P< 0.01) and means were compared by Duncan’s Multiple Range Test (DMRT).

Molecular detection of C. gloeosporioides isolates using ITS and CgInt primers
PCR amplification using universal primers of ITS 1 and ITS 4 produced the expected 560 bp fragment, confirming that 26 isolates belonged to the genus Colletotrichum (Figure 1). PCR amplification with CgInt and ITS 4 species specific primers produced the expected 450  bp   amplicon   confirming   the   isolates    were    C.
gloeosporioides (Figure 2).
Screening of C. gloeosporioides against benzimidazole fungicide – benomyl
The sensitivity of C. gloeosporioides isolates to the fungicide benomyl was evaluated based on the method of poisoned food technique at five different concentrations viz., 0.5, 1.0, 2.0, 5.0 and 10.0 mg/l (Figure 3). The growth of mycelia on the benomyl amended PDA medium was directly correlated to the sensitiveness of the isolates benomyl. Based on this, twenty six C. gloeosporioides isolates were designated as susceptible, moderately resistant and resistant to the fungicide benomyl. At the lowest concentration of 0.5 mg/l benomyl amended medium, all the twenty six isolates were able to grow and the diameter of the mycelium was measured eleven days after inoculation. The isolate MCG 21 produced the least growth of 27.23 mm followed by MCG 22(33.24 mm)  and MCG 13 (33.72 mm) which were significantly different from other isolates. The mycelial growth of 90 mm was observed in the isolates of MCG 3, 16, 23 and 26 at 0.5 mg/l concentration (Table 2). At the concentration of 1 mg/l of benomyl, the percent inhibition over control was higher in the isolate MCG 21 accounting 73.16%, which was on par with the isolates MCG 10 (71.60%) and MCG 22 (71.21%). Least inhibition of  3.06%  was  observed  in the isolate MCG 4. In addition, at the concentration of 2 mg/l the percent inhibition of mycelial growth was ranged from 31.76 to 85.39% and at the concentration of 5 mg/l it ranges from 65.08 to 90.74%. At the highest concentration of 10 mg/l, only two isolates viz., MCG 7 and MCG 16 were able to grow in benomyl poisoned petriplate with the mycelial diameter of 12.00 and 18.00 mm possessing 86.67 and 80.00% inhibition over control, respectively (Figure 4) among 26 isolates. By comparing the mycelial growth of C. gloeosporioides isolates at five different concentrations tested, it was concluded that the isolate MCG 21 was considered sensitive; MCG 7 and MCG 16 were resistant to benomyl fungicide. 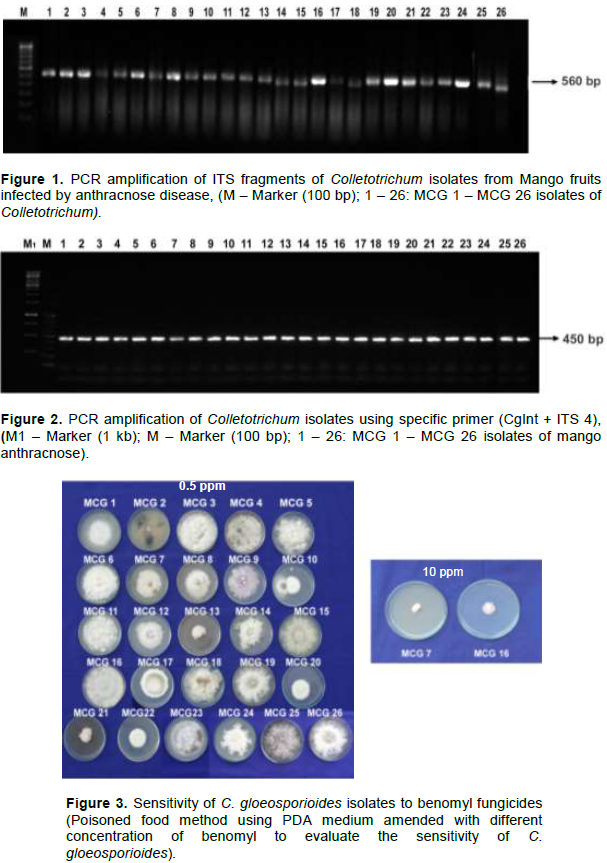 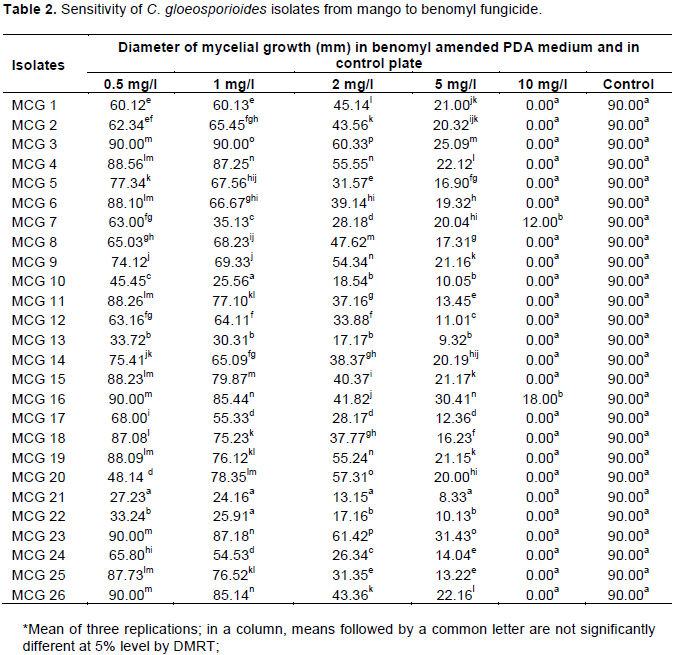 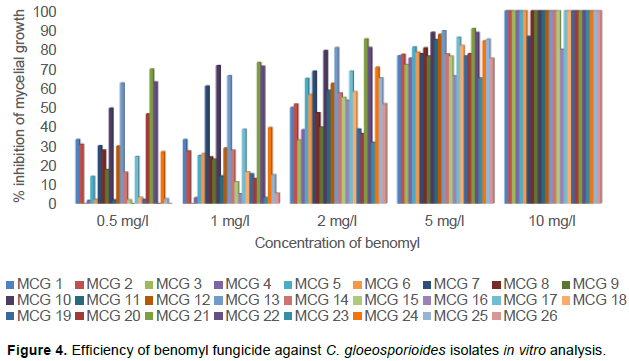 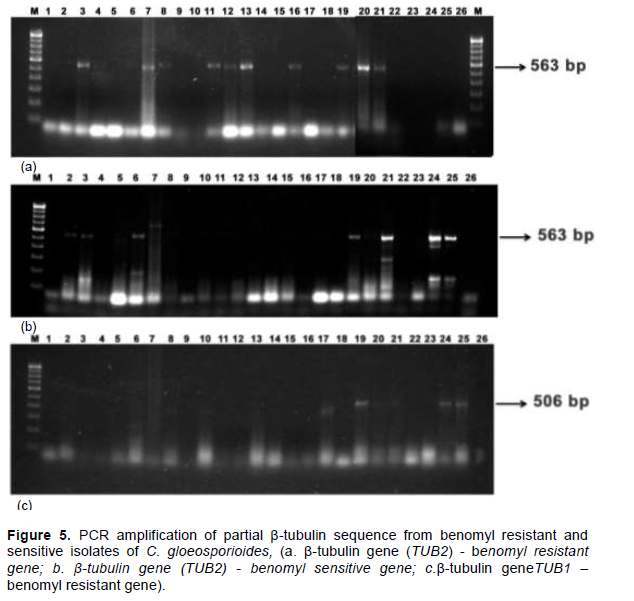 The study reveals that a rapid benomyl tolerance screening could be necessary for examining the potential of different fungicide resistance. Pathogen C. gloeosporioides responsible for anthracnose in mango  is composed of both benomyl-resistant and sensitive populations that are genetically distinct, which might be due to a single β-tubulin gene existing within the fungal genome; however, in others, an additional gene may be present that is divergent in sequence.