Schistosomiasis is a widespread parasitic infection globally but more so in sub-Saharan Africa which accounts for about 90% of those seeking treatment globally. Fresh water aquatic snails are intermediate hosts of parasites causing the disease. Niclosamide was approved by the World Health Organization to be the main molluscicide used in the control of the snails. However, many plant species could be used as alternative molluscicides as they are environmentally friendly. This study aimed to isolate and characterize the chemicals responsible for the molluscicidal activity in the plants, Phytolacca octandra, Phytolocca dodecandra and Balanites aegyptiaca. Parts of the whole plant (berries, leaves, stems and roots) were collected, air dried to constant weight, macerated to a fine powder and extracted separately using methanol in soxhlet apparatus. After extraction, the crude extracts were isolated and purified. The melting points of the isolated compounds were determined and testing was done for alkaloids, triterpenoids, glycosides and saponins. The tests were positive for triterpenoids, glycosides and saponins but negative for alkaloids.
Key words: Schistosomiasis, molluscicide, Phytolacca octandra, Phytolocca dodecandra, Balanites aegyptiaca.

Schistosomiasis is a devastating tropical disease (Jenkins-Holick and Kaul, 2013) and ranked second after malaria in terms of number of people at risk and those infected (Steinmann et al., 2006). It is caused by Schistosoma trematodes (Oliveira-Filho and Paumgartten, 2000) whose intermediate hosts are a variety of fresh water snails (Jenkins-Holick and Kaul, 2013). The disease is prevalent in regions where the population come into contact with infested water and has little access to safe water (Bruun and Aagaard-Hansen, 2008). In some countries like Japan, China, Egypt, Morroco and Brazil, it has been controlled to low levels whereas almost eliminated in the Caribbean Islands, the Islamic Republic of Iran, Mauritius, Morocco, Puerto Rico, Tunisia and Venezuela (Engels et al., 2002). However, the disease causes a huge problem in sub-Saharan Africa where it is currently estimated that 90% of those requiring treatment globally are found in this region, leading to at least 200,000 deaths per year (World Health Organisation, 2016; Jenkins-Holick and Kaul, 2013).
The extract of some plants species have been found to be potent in destroying the snails with some being environment friendly in comparison with niclosamide, the only World Health Organisation recommended molluscicide. These plants include Euphorbia hirta (Yadav and Singh, 2011), Euphorbia milii (Oliveira-Filho and Paumgartten, 2000) and Jatropha gossypifolia (Yadav and Singh, 2014). Balanites aegyptiaca fruit, Entada phaseoloides bark, Derris elliptica roots, sisal pulp and Schima argentea leaves are reported as molluscicides but poisonous to fish (McCollough et al., 1980). McCollough et al. (1980) further reported the berries of Phytolacca dodecandra as a molluscicidal in Ethiopia, as well as the seeds of Croton tiglium and Croton macrostachyus in India and Sudan and the leaves and flowers of Ambrosia maritima in Egypt. The study further noted that an infusion of A. maritima causes 100% mortality of planorbid snails, their egg masses, schistomal miracidia and cercariae after 24 h exposure while having low toxicity to fish, insect and mammals. Chauhan and Singh (2014) established that petrol extract of the plant Alstonia scholaris shows molluscicidal as well as ovicidal activity against the harmful snails Lymnaea acuminata and Indoplanorbis exustus that are hosts to Fascioliasis and schistosomiasis parasites.
Various active compounds in plant species having molluscicidal properties have been reported. Saponins are the active component for B. aegyptiaca, E. phaseoloides, D. elliptica, Swartzia madagascariensis and Spindus saponaria, whereas triterpenoids, saponins, oleanoic acid and glucoside have been reported for P. dodecandra (McCollough et al., 1980). Singh et al. (2010) identified some of the major categories of active compounds in plants with pesticidal activity including saponins (naturally occurring plant glycosides), alkaloids, flavonoids, diterpeneoids, monoterpenoids, sesquiterpenoid lactones and tannins. The plants, Phytolacca octandra (L.), P. dodecandra (L'Herit) and B. aegyptiaca (L.) are used in the control of snails transmitting schistosomiasis in Kenya. Therefore, this study aimed to isolate the active compounds from these plant species.

Collection, preparation and extraction of plant materials
P. dodecandra and P. octandra plant materials were collected  from Njoro Division in Nakuru County, whereas B. aegyptiacca materials were obtained from Kitui County. Identification of the plants was done at Egerton University. The materials were separated into berries, leaves, stems and roots and air dried for a period of six weeks. The dried materials were ground into powder using a hammer mill and stored in clear plastic bags. Using a soxhlet apparatus, a methanolic extract was obtained from 250 g of each ground sample in a duration of 8 h. Removal of the solvent was done in vacuo to give a concentrated extract.
Isolation and purification of active compounds
Isolation and purification of the crude extracts was done as outlined. They were dissolved to give an aqueous solution using the solvents: distilled water, n-butanol, methanol and diethyl ether with P. octandra and P. dodecandra berries extracts and cold methanol with the extracts of all other different plants’ parts. Filtering gave a brown precipitate for P. octandra stem and white crystals for the other plants’ parts after washing with cold methanol, and also with pet-ether, ethyl acetate for P. octandra stem. A Sanyo melting point apparatus was used to establish the melting points. Thin layer chromatography (TLC) analysis of the crystals was done with methanol and silica gel. Antimony chloride in concentrated hydrochloric acid (HCL) was used as the spraying reagent. The tests carried out for: triterpenoids using Liebermann-Buchard reagent, alkaloids using Dragendorff reagent and test for saponins and concentrated H2SO4 was followed to detect the presence of glycosides. Elemental analysis was carried out using the CE 440 Elemental Analyser Exeter Analytical instrument.

Chemical characterization of the isolated compounds
The crystals exhibited very sharp melting points with a range of about 3°C from the onset of melting to the point where the crystals had melted completely (Table 1). TLC analysis of the crystals revealed the presence of single spots, which appeared as pink spots upon spraying with antimony chloride in concentrated HCL acid and heating at 90°C for 10 min. The appearance of a single spot for each compound confirms that the crystals were pure. Antimony chloride in concentrated HCl acid used as a spraying reagent is also used to confirm the presence of saponins, which normally appear as either pink or purple spots (Harborne, 1984). Therefore, the pure compounds could probably be saponins since they gave pink spots. Chemical characterization and isolation of compounds was done for P. octandra and P. dodecandra only as sufficient quantity of materials were not obtained for B. aegyptiaca.

Dragendorff’s reagent was used to test for alkaloids but no precipitate was formed implying that the crystals were not alkaloids.
Using the Liebermann-Buchard reagent turned the crystals color to blue-green indicating the presence of triterpenoids that can be divided into four groups: true triterpenes, steroids, saponins and cardiac glycosides (Harborne, 1984).
However, TLC analysis suggested the presence of saponins. Therefore, the triterpenoid saponins are the most probable compounds that are responsible for the blue-green coloration. Concentrated H2SO4 was used to test the crystals for the presence of glycosides. A positive result, indicated by development of an intense red coloration of the sample MWR was observed. The others produced specks of red coloration. These specks of red coloration could probably be as a result of glycosides linked to the aglycone chain of the saponin.
A test for saponins was carried out by adding diethyl ether to a solution of the crystals in methane. A white precipitate was formed indicating the presence of saponins. Fractionated extracts of P. octandra and P. dodecandra were positive for the presence of saponins. These findings are in line with those of Treyvaud et al. (2000) and Thiilborg et al. (1993) that the berries of P. octandra and P. dodecandra are rich in saponins and therefore one of the best sources of plant species having molluscicidal potency.
Elemental analysis
Elemental analysis of the crystalline compounds showed that MWR, BBC and GSC are basically made of carbon, hydrogen and oxygen varying in percent composition. Correlation analysis was done to compare the observed similarities between the isolated crystalline compounds and known isolated compounds from plants of the Phytolaccaceae family (Thiilborg et al., 1993; Treyvaud et al., 2000). From the correlation analysis (Table 2), there is a high likelihood that the isolated compounds are saponins since a high positive correlation was obtained (r > 0.93) for all tested samples. 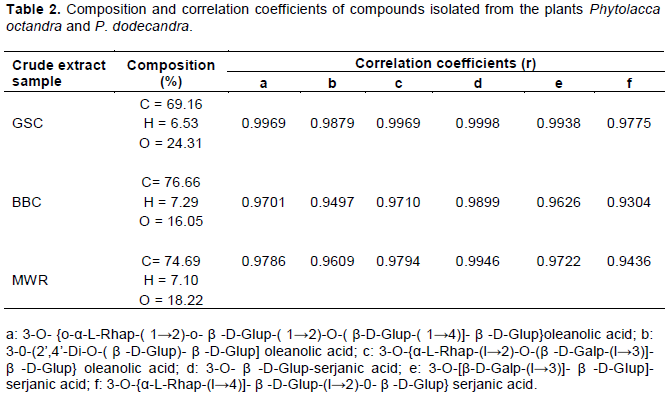 Chemical characterization of the isolated crystalline compounds indicates that they were pure saponins. The pharmacological evidence and chemical characterization results from this study serve as a link between scientific findings and traditional empirical knowledge. The results also confirm existing traditional empirical knowledge that the studied plants, which are used as soap substitutes locally, contain saponins.

The authors are grateful to Egerton University and the Institute of Primate Research Malacogy Laboratory at Fort Jesus, Mombasa, Kenya, in which the study was carried out.